The myth that the world is going to hell! Seven incredible charts that prove the world IS becoming a better place - despite all the doom and gloom

Despite grim daily headlines about insurmountable political divides, disaster-inducing climate change and crushing poverty, in many ways, humankind is actually better off than it has ever been before.
Worldwide, life expectancies are up, child mortality rates are down and global income inequality has fallen, according to late Swedish academic Hans Rosling.
In his book, 'Factfulness,' Rosling outlines the countless ways that the world has become a better place over the past century – important global context, he says, for the problems that preoccupy our minds and color our perspectives.
'I'm talking about fundamental improvements that are world-changing but are too slow, too fragmented, or too small one-by-one to ever qualify as news,' Rosling wrote. 'I'm talking about the secret silent miracle of human progress.'
For example, each day an estimated 200,000 people worldwide are lifted above the $2-a-day poverty line. And more than 300,000 people gain access to electricity and clean water for the first time, every single day.
Overall, Rosling maintained that there are several key metrics that prove that the world should be more optimistic about the future. German economist Max Roser illustrated many of those same metrics on his data visualization website, Our World in Data.
1. Fewer people live in poverty now than any other time in history 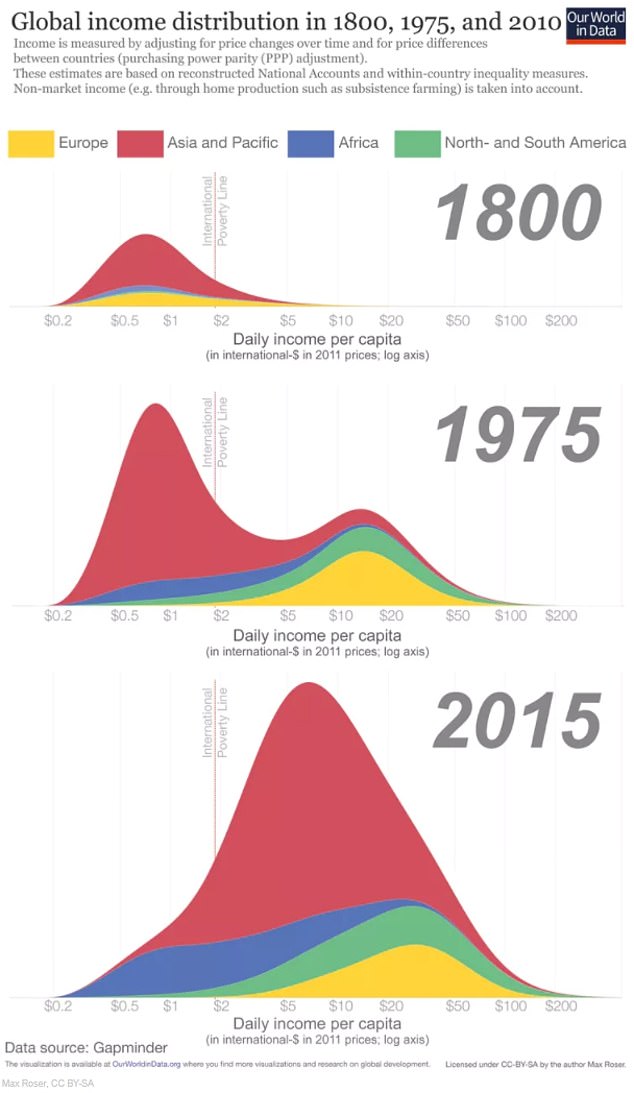 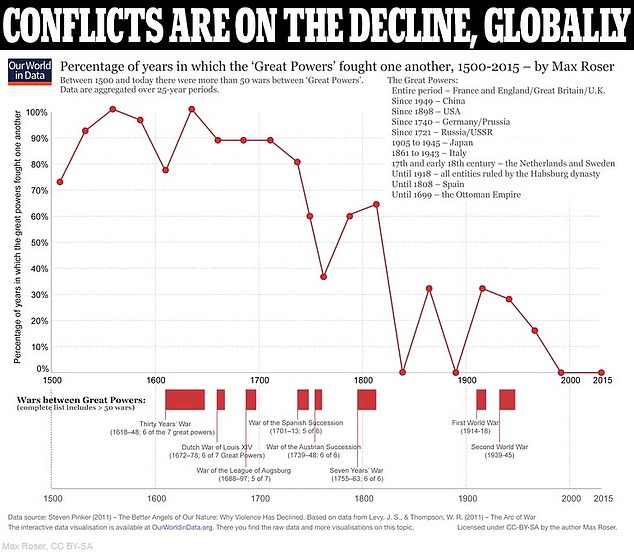 This chart illustrates the worldwide decrease in international conflicts since 1500
Finally, Rosling observes that international conflicts and wars are actually on the decline after centuries of unrest. Since roughly 1500, two or more of the world's most powerful countries have been at war more than half of the time.
While conflicts in Syria and Yemen are currently creating massive humanitarian crises, it's notable that there has been no war in Western Europe for about three generations.
'Many people overestimate how many people are killed in conflict because there is a lot of news coverage of these items,' Roser said.
'If you look at the number of people who are killed by terrorism for 2016, 0.06 percent of the people that died in 2016 died because of terrorist attacks,' Roser added. 'And if we include conflict, that's a fifth of a percent. So much, much less than a percent of the world is dying from this (type of) violence.'
Ultimately, Rosling - and Roser - held that there is much to be hopeful about as we look to the future and learn from the past.
'We shouldn't diminish the tragedies of the droughts and famines happening right now,' Rosling wrote. 'But knowledge of the tragedies of the past should help everyone realize how the world has become both much more transparent and much better at getting help to where it's needed.'
Posted by ASC at 11:54 AM