Trump lashes out at Beijing for telling him not to call coronavirus 'Chinese virus' and says it's them who are smearing the U.S. military as the 'source' of pandemic

I should add that China has been known to be the source of several virus vectors like the swine flu, avian flu, SARS, the black plague during the middle ages, and now their audacity to blame the USA of the Corona virus outbreak. The misinformation made by Beijing to lay blame on the Americans is an effort to dilute the truth, made by their leaders well known to bent the facts. China coronavirus should really be called, the Chinese Virus.

Their leaders do not take into account, about the dirty custom of their people eating bats infected by this virus. The Chinese consider bats as a delicacy, and thus the transfer of the virus from animal to man. Infected blood from the bats can transfer to man easily during the preparation for cooking, no matter how much intense heat during boiling or frying. This is why the fish market in Wuhan, where freshly cut bats were sold, mixed with the fish, is the start of this pandemic, and as common custom with the Chinese Communist leaders to lay blame on others. All these to avoid the embarasment  of another Chinese super virus.
Donald Trump said Tuesday that he doesn't think it's inappropriate to call coronavirus the 'Chinese virus' because that's where the disease originated.
The president said during a press briefing Tuesday afternoon that he only started referring to the virus in that way after Beijing blamed the U.S. military for bringing coronavirus to China.
'Well China was putting out information, which was false, that our military gave this to them. That was false,' Trump asserted in remarks to the press. 'And rather than having an argument, I said I have to call it where it came from. It did come from China.'
'So I think it's a very accurate term,' he continued. 'But, no, I didn't appreciate the fact that China was saying that our military gave it to them. Our military did not give it to anybody.'


When a reporter brought up that the term 'Chinese Virus' has a stigma around it and that some have called it racist, Trump pushed back.
'No, I don't think so. No,' he said, flipping the switch: 'I think saying that our military gave it to them creates a stigma.' 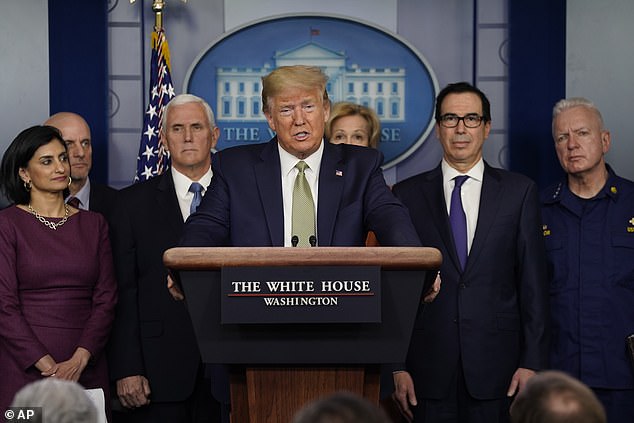 +13
Donald Trump said Tuesday that he thinks calling coronavirus the 'Chinese virus' is appropriate because the disease originated in Wuhan, China 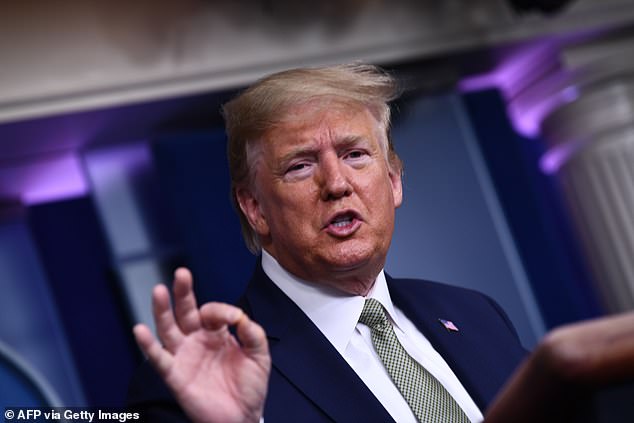 +13
Trump said that 'rather than having an argument,' about where it originated, he would 'have to call it where it came from. It did come from China. So I think it's a very accurate term' 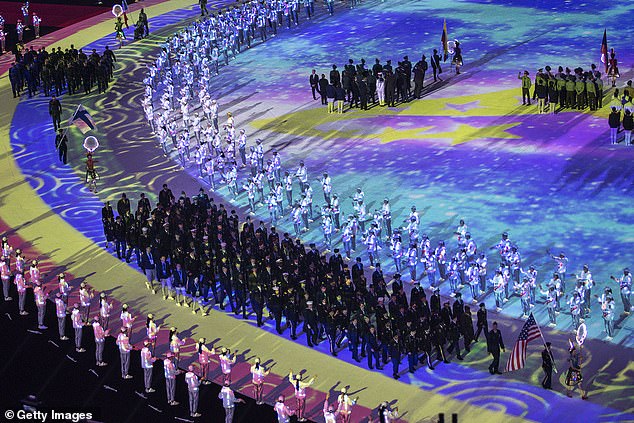 +13
Chinese officials are floating the conspiracy that those in the U.S. Army brought coronavirus to China during the Military World Games in Wuhan in October 2019 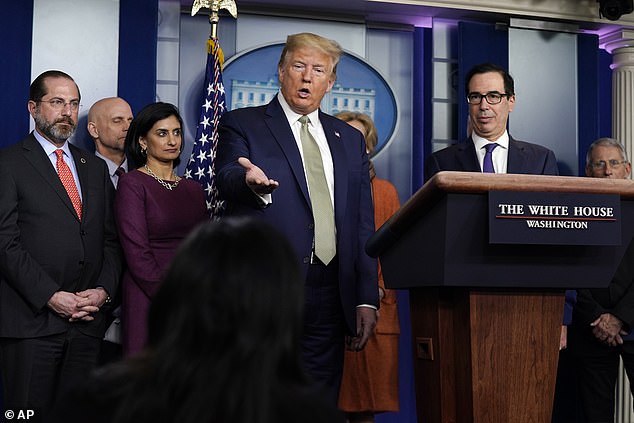 +13
When asked about the stigma around calling it the 'Chinese virus,' Trump said the real 'stigma is 'saying that our military gave it to them'
Chinese officials have been floating a conspiracy that the U.S. Army brought coronavirus there when they participated in the Military World Games in Wuhan, China in October 2019.
Trump did not say whether he would continue using the phrase when asked, but just minutes later in a meeting with tourism executives, the president again called it the 'Chinese virus.'
He said he was talking to the industry leaders about 'what has happened since the Chinese Virus came about.'
Trump doubled down Tuesday morning after China lashed out for him calling the novel coronavirus 'the Chinese Virus.'
The president tweeted Monday: 'The United States will be powerfully supporting those industries, like Airlines and others, that are particularly affected by the Chinese Virus. We will be stronger than ever before!'
Early Tuesday Beijing demanded 'the U.S. side correct the mistake immediately and halt its groundless accusations.'
But Trump then doubled down tweeting Tuesday morning about New York's governor Andrew Cuomo - who has demanded the military are activated to build hospitals - that: 'Cuomo wants 'all states to be treated the same.' 'But all states aren't the same. Some are being hit hard by the Chinese Virus, some are being hit practically not at all.'
The tweet-for-tat came the day after Trump's Secretary of State, Mike Pompeo, called China to accuse it of spreading conspiracy theories that the virus was the creation of the U.S. military.
Contrasting conspiracy theories, that it was created by China as a tool for biological warfare, have been aired in pro-Trump circles in the U.S.
And Pompeo himself has called it the Wuhan virus in a series of media appearances, as have fervently pro-Trump Republicans including Tom Cotton, the Arkansas senator, and Paul Gosar, an Arizona congressman who then had to go into self-quarantine over fears he was infected with it.

First hit: Beijing has accused 'certain American politicians' of promoting stigmatization by connecting the novel coronavirus with China after President Trump published the post on Twitter

Double down: He posted the next morning that 'some are being hit hard by the Chinese Virus,' while others are not experiencing as bad a fallout from the outbreak 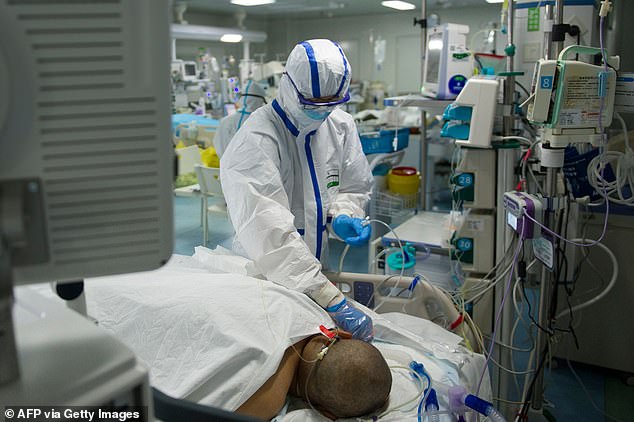 +13
Diplomatic feud over crisis: The U.S. and China are clashing over how to describe covid-19, the novel coronavirus first seen in Wuhan, China
Coronavirus: A look at how coronavirus has spread outside China 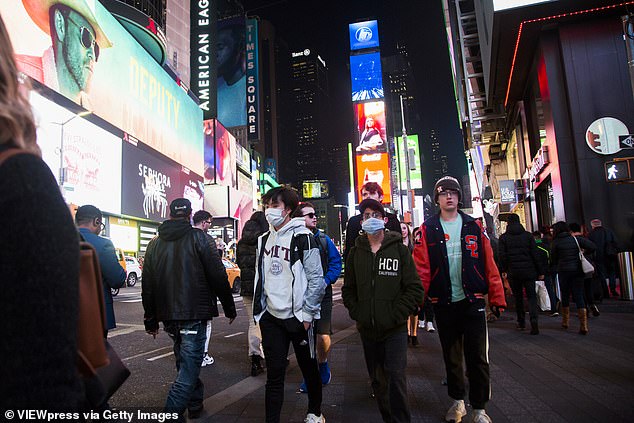 +13
Coronavirus fears have gripped the United States with multiple cities going into lock down. Young people wear protective masks while walking through Times Square in NYC on March 5 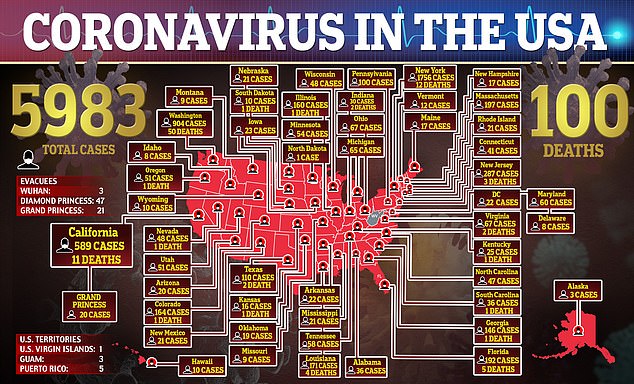 +13
Nearly 6,000 people have been infected in the U.S. and at least 100 have died after contracting coronavirus
Anti-US sentiment is also growing in China as people on the country's Twitter-like Weibo has shown an outpouring of anger towards President Trump.
One person said: 'Trump is the virus of the world'.
Another typical comment accused: 'American virus!'
On Monday Pompeo, in a phone call he initiated with top Chinese official Yang Jiechi, voiced anger that Beijing has used official channels 'to shift blame for COVID-19 to the United States,' the State Department said.
Pompeo 'stressed that this is not the time to spread disinformation and outlandish rumors, but rather a time for all nations to come together to fight this common threat,' the department added.
The State Department on Friday summoned the Chinese ambassador, Cui Tiankai, to denounce Beijing's promotion of a conspiracy theory that had gained wide attention on social media. 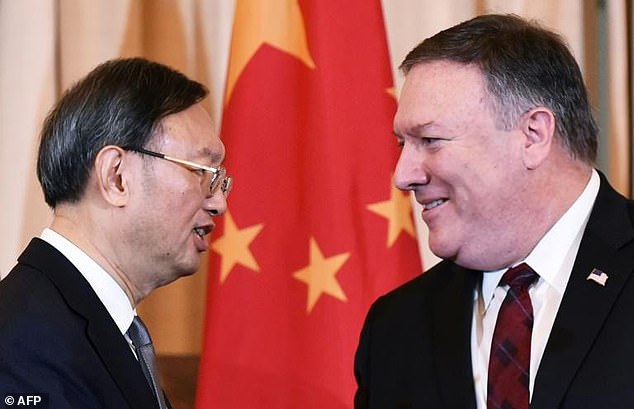 Foreign ministry spokesman Zhao Lijian, in tweets last week in both Mandarin and English, suggested that 'patient zero' in the global pandemic may have come from the United States -- not the Chinese metropolis of Wuhan.
'It might be US army who brought the epidemic to Wuhan. Be transparent! Make public your data! US owe us an explanation,' tweeted Zhao, who is known for his provocative statements on social media.
Scientists suspect that the virus first came to humans at a meat market in Wuhan that butchered exotic animals.
Pompeo himself has sought to link China to the global pandemic, repeatedly referring to SARS-CoV-2 as the 'Wuhan virus' despite advice from health professionals that such geographic labels can be stigmatizing.
Yang issued a 'stern warning to the United States that any scheme to smear China will be doomed to fail,' the official Xinhua news agency said in its summary of the call with Pompeo.
Republican Senator Tom Cotton, a Trump ally, has spoken of the 'Chinese coronavirus' and in a recent statement vowed, 'we will hold accountable those who inflicted it on the world.'
While COVID-19 -- the disease caused by the virus - has largely come under control in China, it has killed more than 7,000 people around the world and severely disrupted daily life in Western countries.
The news comes as China tries to deflect blame for the contagion and reframe itself as a country that took decisive steps to buy the world time by placing huge swathes of its population under quarantine. 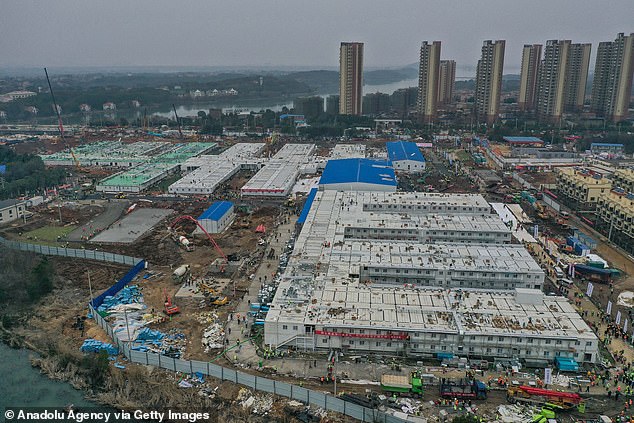 +13
China built a 1,000-bed coronavirus hospital in 10 days in Wuhan to curb the epidemic. The picture shows Huoshenshan Hospital nearly complete on the outskirts of Wuhan on February 3
China reported only one new domestic infection today compared to a daily toll of 15,152 five weeks ago.
It also comes after China and the United States blamed each other as the alleged origin of the killer infection.
A Beijing spokesperson last week claimed that the coronavirus might have been brought to Wuhan by the US military while US politicians called it the 'Wuhan virus' or 'Chinese coronavirus'.
With cases falling in China and soaring abroad, Beijing is now rejecting the widely held assessment that the city of Wuhan is the birthplace of the outbreak.
The United States has angered China by using language directly linking the virus to the country.
US Secretary of State Mike Pompeo referred to it as the 'Wuhan virus', prompting Beijing to reject the term as 'despicable' and 'disrespecting science'.
While Kevin McCarthy, a US congressman, called the virus the 'Chinese coronavirus' on Twitter.
In a tweet on Monday, he wrote: 'Everything you need to know about the Chinese coronavirus can be found on one, regularly-updated website.' He was sharing the link to the website of the US Centers for Disease Control and Prevention. 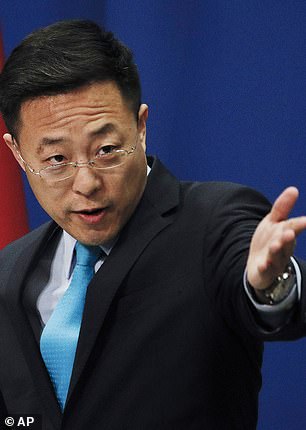 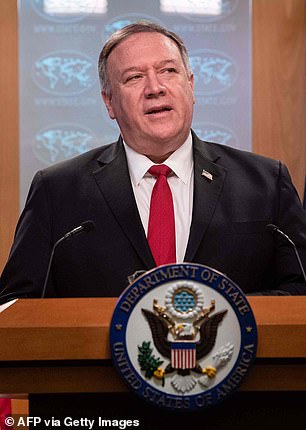 +13
China and the US have blamed each other as the alleged origin of the virus. China's Foreign ministry spokesman Zhao Lijian (left) accused the US military of bringing the coronavirus to Wuhan while US Secretary of State Mike Pompeo (right) referred to it as the 'Wuhan virus'

China admitted the coronavirus originated in Wuhan in January

+13
A woman walks in front of the closed Huanan wholesale seafood market on January 12
The push to question the origin of the disease contradicts China's own initial assessment about the source of the virus, which has now killed more than 7,000 people worldwide.
Gao Fu, head of China's Center for Disease Control and Prevention, said in January 'we now know the source of the virus is wild animals sold at the seafood market' in Wuhan.
Chinese authorities themselves saw Wuhan and the rest of Hubei province as a threat as they placed the region of 56 million people under strict quarantine to contain the epidemic.
But Beijing began sowing doubts in late February, when Zhong Nanshan, a respected expert affiliated with the National Health Commission, told reporters 'the epidemic first appeared in China, but didn't necessarily originate in China'.
Scientists, however, have long suspected that the virus jumped from an animal at the Wuhan market to a human before spreading globally.
The World Health Organization has said that while the exact path the virus took between its animal source and humans is still unclear, COVID-19 was 'unknown before the outbreak began in Wuhan, China, in December 2019'.
Christl Donnelly, a professor of statistical epidemiology at Imperial College London, said genetic analysis of coronavirus samples collected from around the world showed a common ancestor in China.
'This is not in any way blaming a particular country,' she told AFP.
Posted by ASC at 5:30 PM