A two-year break from boxing has left Philippine legend Manny Pacquiao "hungry" to get back in the ring for what could be the last fight of his storied career -- and a warm-up for a presidential rumble.

The eight-division world champion and beloved national hero will have tens of millions of fans from the boxing-mad archipelago in his corner when he faces American Errol Spence in Las Vegas on August 21.

Pacquiao's comeback fight is a chance to prove his mettle at 42 -- an age when most boxers have already hung up their gloves -- and score a lucrative payday before a widely expected tilt at the presidency next year.


"I'm a politician, all politicians are dreaming for the higher position," the elected senator told AFP in his southern hometown of General Santos, where he is training.

"I'm going to announce (my decision) in the proper time, maybe after the fight."

Pacquiao's star power in a country famed for its celebrity-obsessed politics would put him in a strong position in the presidential race.

But it would not guarantee victory.

A public skirmish between Pacquiao and President Rodrigo Duterte over the latter's handling of the South China Sea dispute with Beijing and official graft could erode support for the boxer.

Duterte -- who is allowed to serve only one term as president -- rivals Pacquiao for the affections of many Filipinos and has even flagged a possible run for the vice presidency in 2022.

Until recently, Pacquiao was a high-profile backer of Duterte and his controversial drug war, which International Criminal Court prosecutors want to investigate for the alleged unlawful killing of possibly tens of thousands of people.#photo1

Pacquiao told AFP he would continue the crackdown, but in a "proper way" that does not abuse "the rights of individuals".

Asked if he would protect the current president from criminal charges if he became leader, he said: "All of us are bound to the law."

Pacquiao would face a formidable opponent if Duterte's daughter, Sara, were to run for the top job.

A recent poll showed the Davao city mayor -- the same position her father held before he took power in 2016 -- with the most voter support, well ahead of Pacquiao and other potential contenders.

But a lot can change between now and the October deadline for candidates to register.

"Right now my expectation is that (Pacquiao) runs, but not as Duterte's chosen successor," said Eurasia Group analyst Peter Mumford.

"But it's the Philippines so it's very unpredictable."

Decisions on whether to retire after the Spence fight or run for the highest office are in God's hands, according to Pacquiao, a father of five.#photo2

Religion looms large in the life of the boxer, who became a devout evangelical Christian about a decade ago after giving up his playboy lifestyle.

He even relies on his faith -- and vitamin C -- to ward off Covid-19 while he considers getting vaccinated against the deadly disease.

"I always keep in trusting God because he's the one who give me the ability to accomplish all those things," he said.

Pacquiao is deeply admired in the Philippines for his generosity and hauling himself out of poverty to become one of the world's greatest and wealthiest boxers.

Dozens of locals wait outside his gym in downtown General Santos in the hope of catching a glimpse of the rags-to-riches hero -- and receiving some money -- before he climbs into an olive green Hummer to drive back to his manicured compound.#photo3

"Pacquiao is the idol of everyone in this city," said Meme Dipundato, a 40-year-old tricycle driver.

"What I really like about Pacquiao is not his boxing but his act of helping the poor."

But the fighter has stirred controversy since entering politics in 2010 -- first as a congressman and then a more high-profile position in the Senate -- supporting the death penalty and describing gay couples as "worse than animals".

He promises to pull no punches if he were to become president -- starting with sending "hundreds or thousands" of crooked politicians to a purpose-built "mega prison".#photo4

"There are so many problems in this country caused by corruption... there's no economic growth and development, there's no improvement," he said.

For now, Pacquiao said his mind was focused on the looming showdown with fellow southpaw Spence, the 31-year-old unbeaten unified welterweight world champion.

Pacquiao, who boasts a 62-7-2 win-loss-draw record, will be fighting for the first time since he beat Keith Thurman in July 2019 for the WBA welterweight title -- which he lost during the coronavirus pandemic due to inactivity.#photo5

He will fly to Los Angeles this month where he will be reunited with veteran trainer Freddie Roach.

In the meantime, he shadow boxes and spars with long-time associate Buboy Fernandez at his Pacman Wild Card Gym.

"I believe 110 percent that Manny is going to win. His stamina is still there," Fernandez told AFP.

Hanging above the ring, along with photos of his bloody fights, are biblical proverbs on the importance of "self-discipline" and faith.

Despite his age and long absence from the ring, Pacquiao said he was undaunted.

“Duterte will want to make sure he avoids potential legal action against him after leaving office, so obviously he has a clear interest in making sure that his person is the next president,” said Peter Mumford, Southeast and South Asia practice head at risk consultancy Eurasia Group. “Pacquiao actually could have a shot even without Duterte’s blessing,” he added. “Parties are not that important in Philippine elections -- it’s about individuals.”

A survey released in April from Pulse Asia Research Inc., one of the most credible in the Philippines, found Sara Duterte was the public’s top choice to be the next president. Pacquiao was in a statistical tie for second with Marcos Jr., Manila Mayor Isko Moreno and Senator Grace Poe. 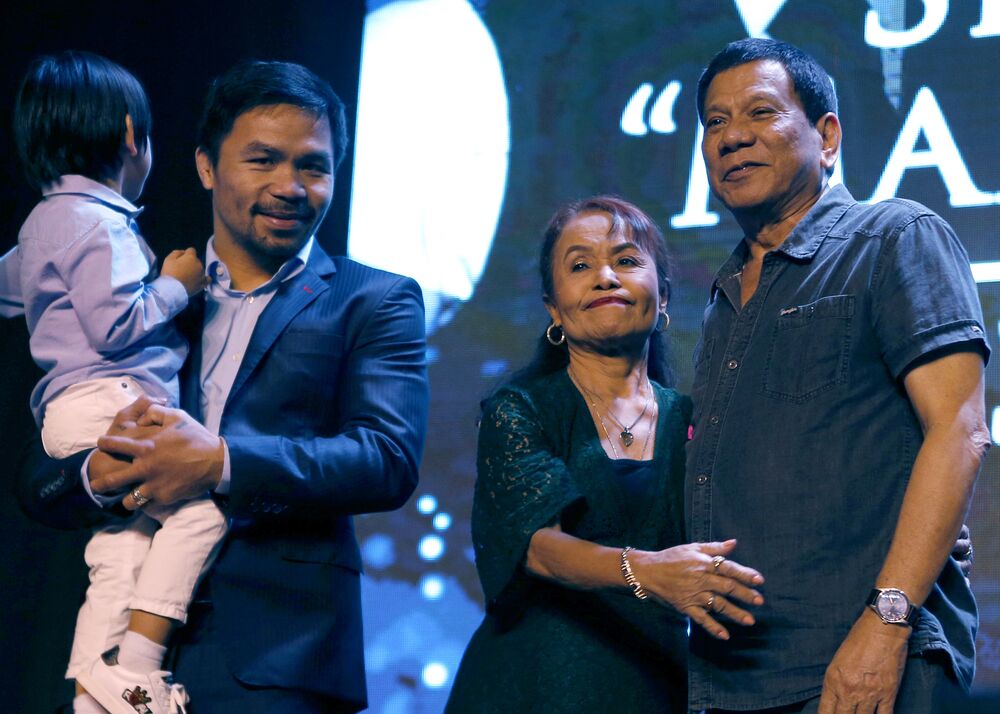 Back in 2016, when Pacquiao allied with Duterte, he defended the revival of the death penalty for heinous crimes and backed Duterte’s deadly campaign against illegal drugs, which saw thousands of extra-judicial killings. Yet lately the boxer has sought to distinguish himself from the president.


In late April, Pacquiao said he wrote a letter to the Chinese ambassador asking him to withdraw his country’s ships in Philippine-claimed parts of the South China Sea, and later described Duterte’s response to the crisis as “lacking.” Pacquiao also sent U.S. President Joe Biden a letter through the embassy requesting to facilitate early delivery of Moderna Inc.’s Covid-19 vaccines.
No ‘Falling Out’

Pacquiao hasn’t yet declared his intention to run in the May elections. Calls to his office weren’t returned. During a speech to the Senate on Wednesday he said the party should focus on the epidemic and power shutdowns in the capital, Manila, rather than politics.

Harry Roque, a spokesman for Duterte, dismissed any notion of a rift between the two men. “I don’t think there is a falling out,” he said at a briefing last month. “Until now, the president remains to be a huge fan of Senator Pacquiao in terms of strength and in the field of boxing. Let’s leave it at that.”

On Thursday, he said that Pacquiao is among at least five politicians Duterte is considering supporting in the next elections. He may also decide to back Go, Marcos, Moreno or Sara Duterte, though he still doesn’t want his daughter to run for the top job, Roque said.

Still, some in the party have questioned Pacquiao’s leadership role, leading to the internal spat last week. Raul Lambino, a senior party official, said Pacquiao was never elected as party president even while vowing to support the boxer if he were ever voted in.

The maneuvering will likely continue until candidates must formally file to run in October, according to Edmund Tayao, executive director of the Local Government Development Foundation and a faculty member of the Ateneo School of Government.