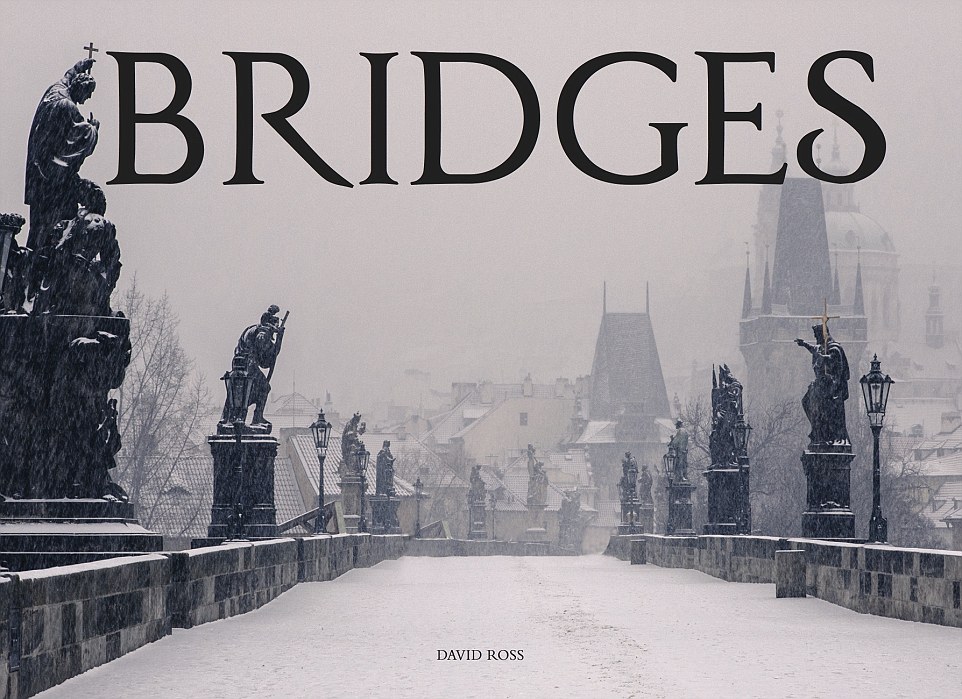 From huge viaducts to stone-built crossings, the world's most incredible bridges have been revealed in a mesmerising new book.
Simply titled Bridges, it charts a whole range of crossings, from the ancient to the futuristic.
They include the stunning 7.6-mile-long Vasco da Gama bridge in Lisbon, Europe's largest crossing, and the eye-popping 35-arch Pont du Gard aqueduct in France - Roman engineering at its most bombastic.
The tome also details a beautiful 17th-century wooden Japanese bridge, a bridge in Myanmar made from 1,086 pillars and a bridge in Bordeaux that has a vertical section that can be raised to allow ships to pass through.
The book, by David Ross, also explains how the technology of building bridges over the years has changed and how they have been catalysts for social change. 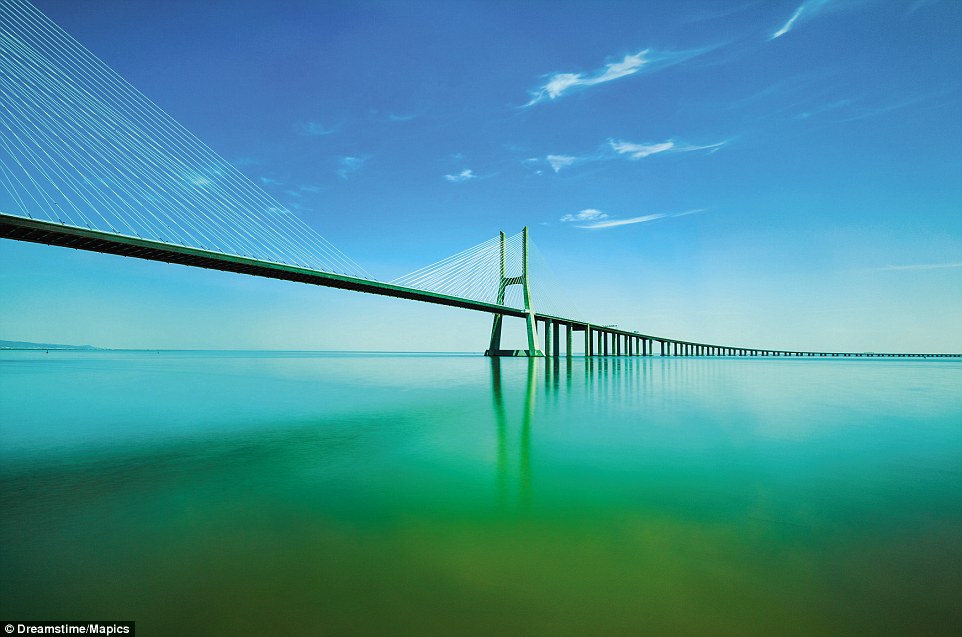 +21
The Ponte Vasco da Gama is Europe's longest bridge, crossing the Tagus estuary to bypass Lisbon. The cable-stayed main span is 420m (1,378ft) and the full length is 7.67 miles. It is built to withstand a major earthquake, and to have a life expectancy of 120 years 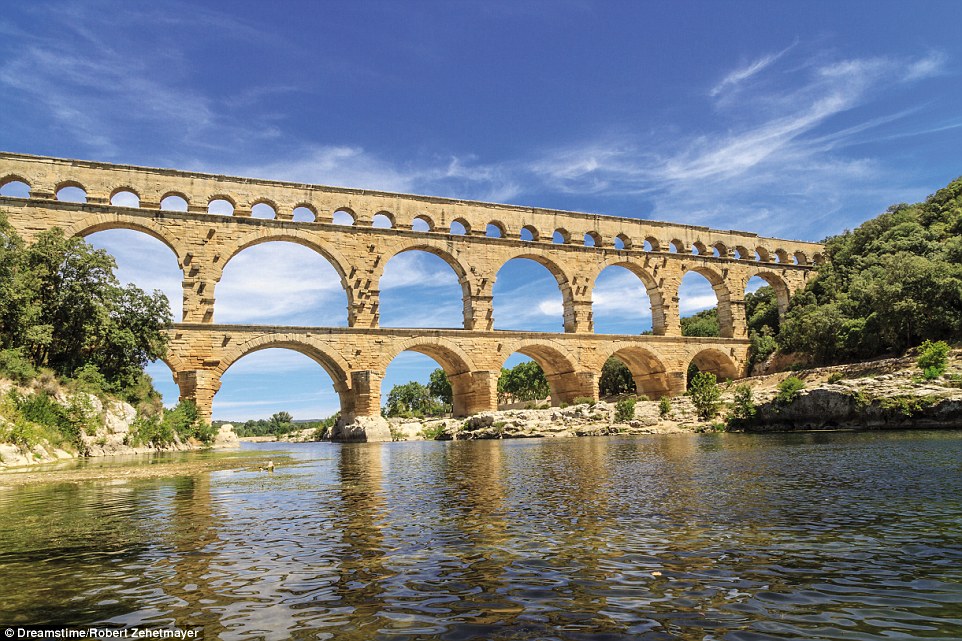 +21
Built over the Gard River in France between 40 and 60CE, the Pont du Gard is 902ft long and is the highest Roman aqueduct (164ft), once carrying around 200,000 cubic metres of water a day on an imperceptible gradient of 1/3000. Its two lower levels were built without mortar. In use as an aqueduct until the sixth century, it owed its survival to being used as a roadway 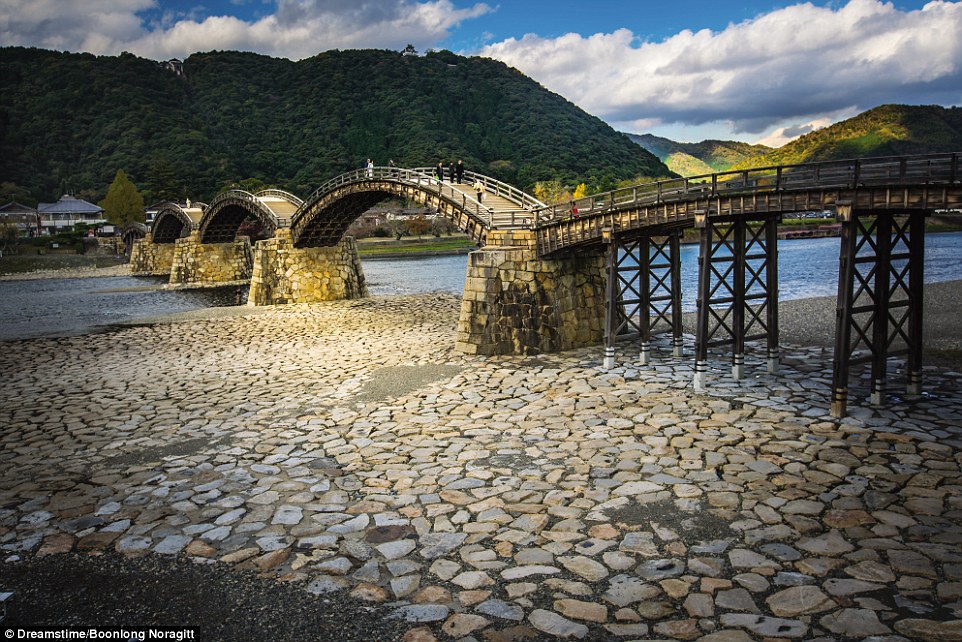 +21
The five arches of the Kintai Bridge in Japan that seemingly float up from their solid stone piers present a superb example of all-wood construction, using Japanese zelkova, pine, cypress, chestnut and oak. In this form, the bridge dates back to 1673, though rebuilding was required in 1950 when the arches were washed away. Kintai means 'gold brocade sash' 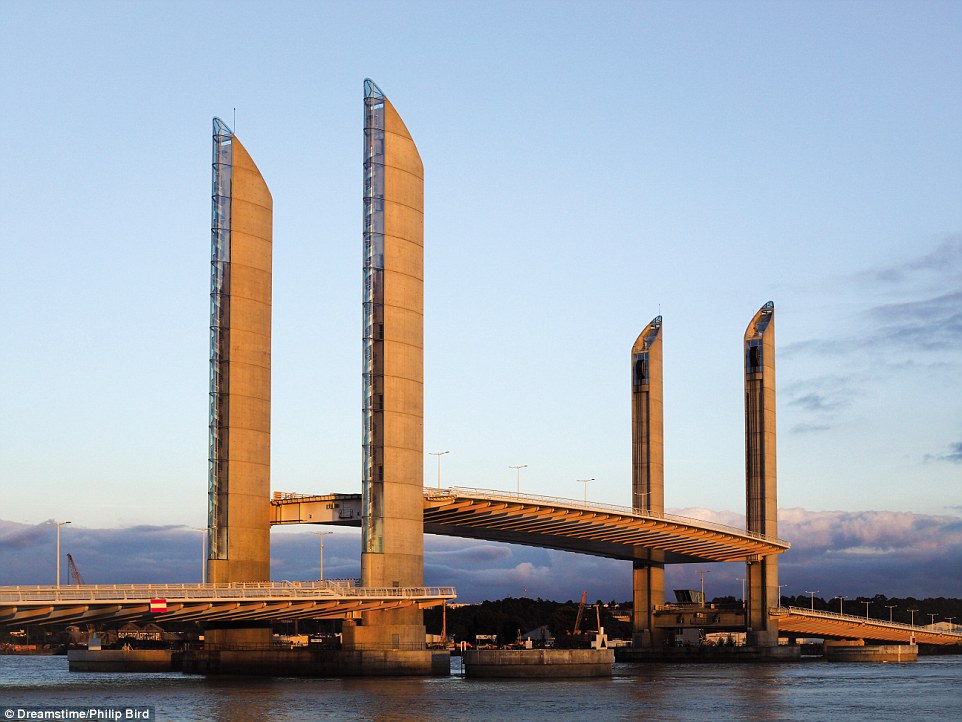 +21
Europe's longest vertical-lift bridge, the Pont Jacque Chaban-Delmas in Bordeaux, opened in 2013. It allows large ships to pass on the Garonne River. Its 2,600-tonne central lifting span is counter-balanced by 600-tonne weights in the four towers. The span is steel, the towers are concrete and the lighting systems emphasise its vertical lines 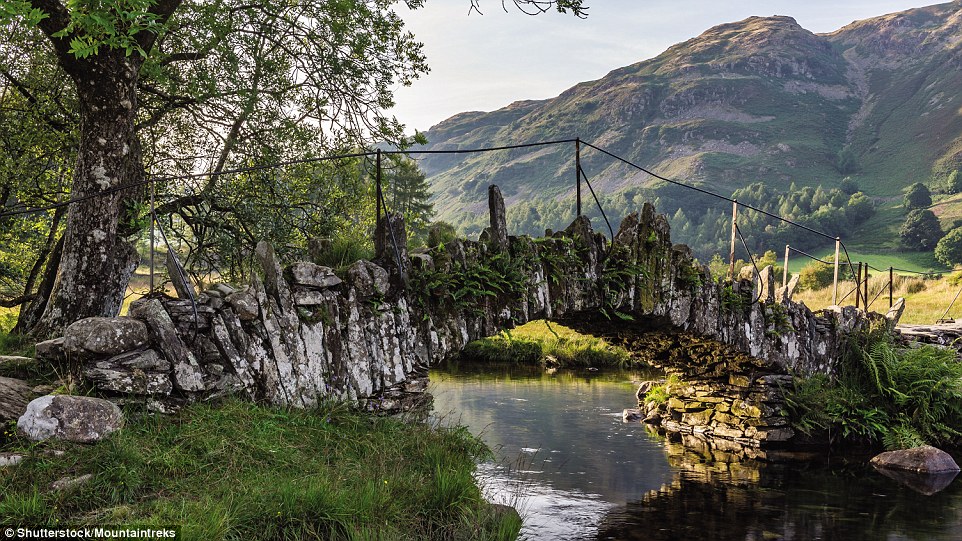 +21
Built in the late 18th century across the River Brathay, Slaters' Bridge in Cumbria is a combination of arch and slab and was on a pack-horse route to carry slates from quarries in the hills. The voussoirs (arch stones) are up to 4.3ft long. The width of only 4.2ft meant it required very careful passage 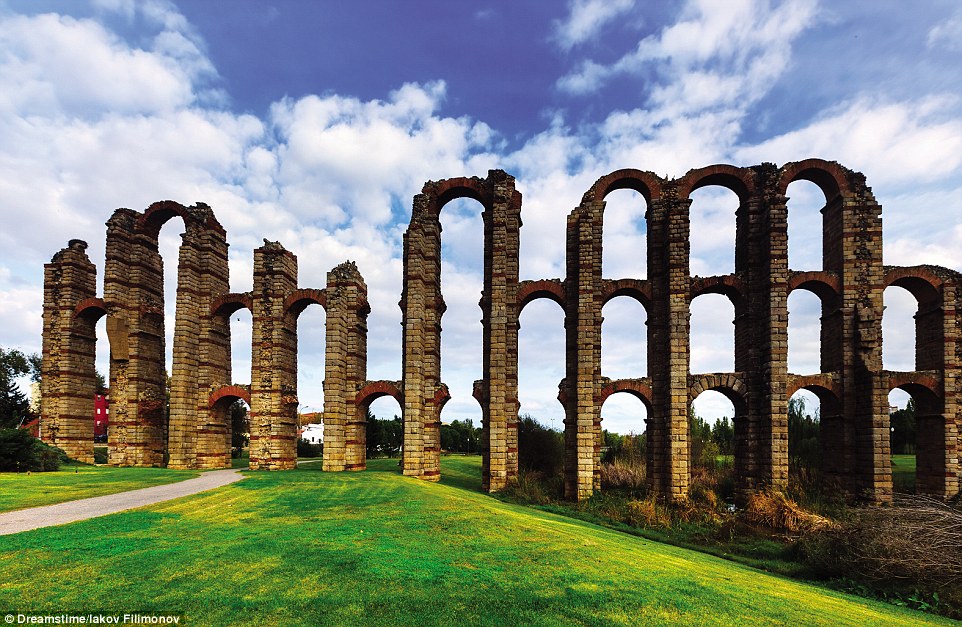 +21
Carrying water to the Roman city of Emerita Augusta over the Albarregas River in Spain, the Aqueduct de los Milagros was built soon after 100CE, when Roman engineering reached a high point during the reign of Trajan. Nowadays, it is favoured by storks for nest-building. Its maximum height is 98.5ft and the longest span between piers is 14.8ft 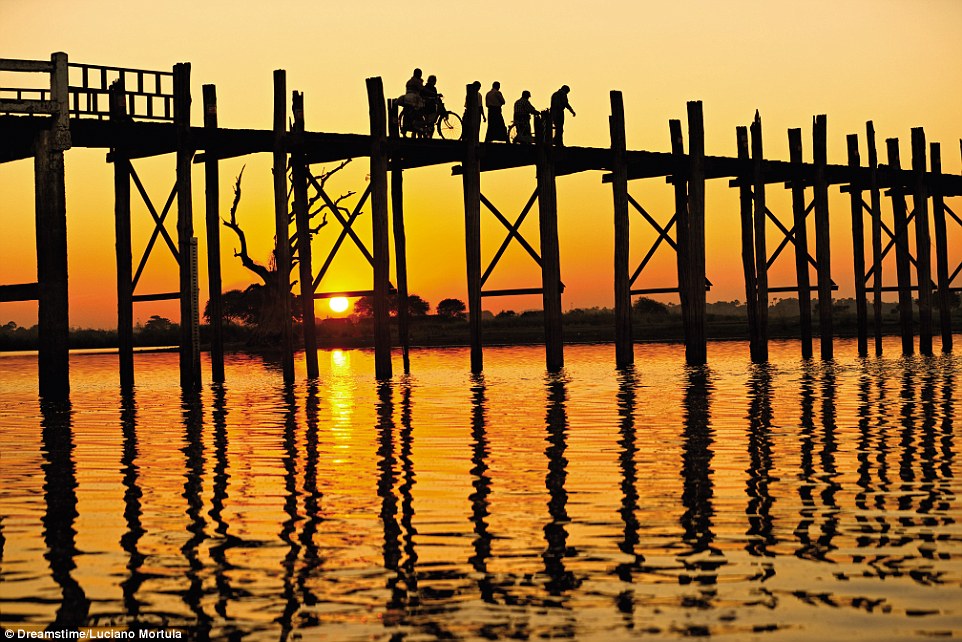 +21
Between 1849 and 1851 the teakwood U Bein Bridge in Myanmar was built across the Taung Tha Man Lake, using timbers from a dismantled palace. In total 1,086 pillars support it but some of the originals have been replaced by concrete. It is 3,967ft long, with four wooden pavilions, and nine movable spans to allow boats to pass 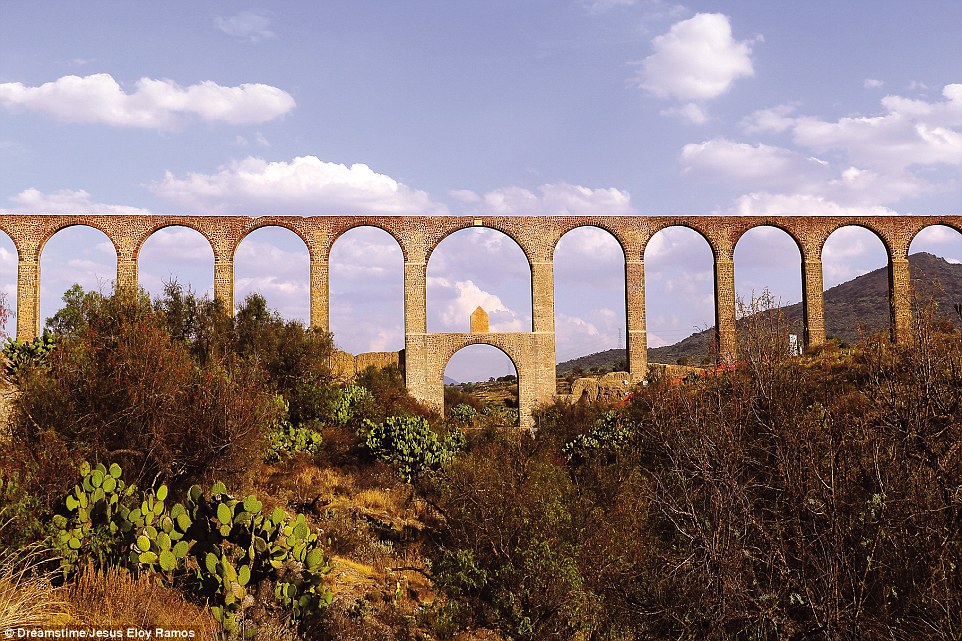 +21
Part of a vast hydraulic irrigation system, the initiative of Franciscan friars, the striking Padre Tembleque Aqueduct in Mexico was built between 1555 and 1572. Its 68 arches cross the Tepeyahualco Ravine and Papalote River, with a maximum height of 111ft. The brickwork construction combined European technology and Mesoamerican building techniques 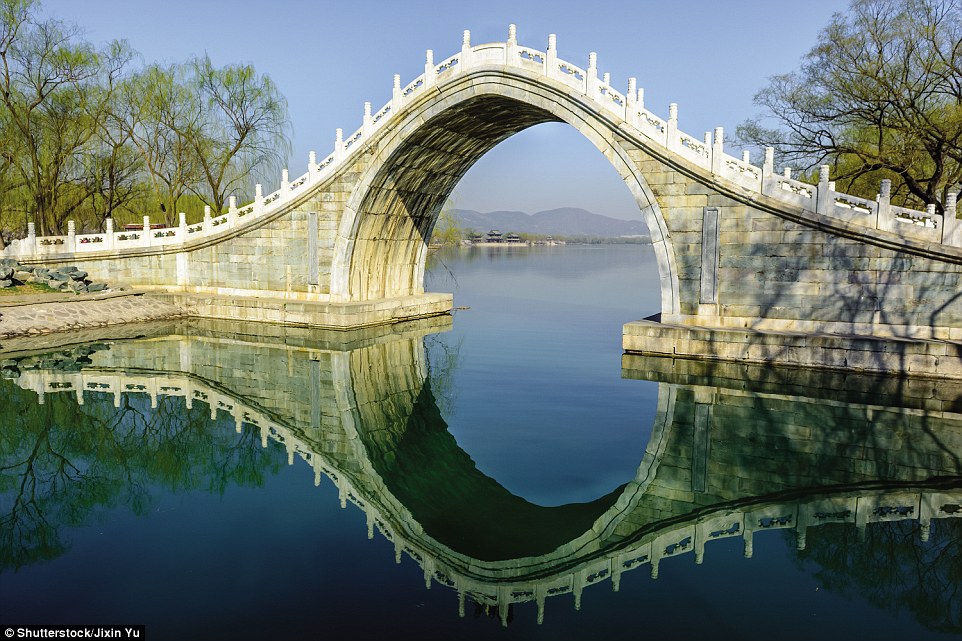 +21
Spanning the outlet from Kunming Lake to the Yu River in the Summer Palace Complex, the Jade Belt Bridge's high arch was designed to allow passage to the imperial barge in Beijing. But it is also known as 'Moon Bridge': the arch and its reflection in the water making a full circle. Built between 1715 and 1764, its name comes from the decorated archivolts, said to resemble jade ornaments 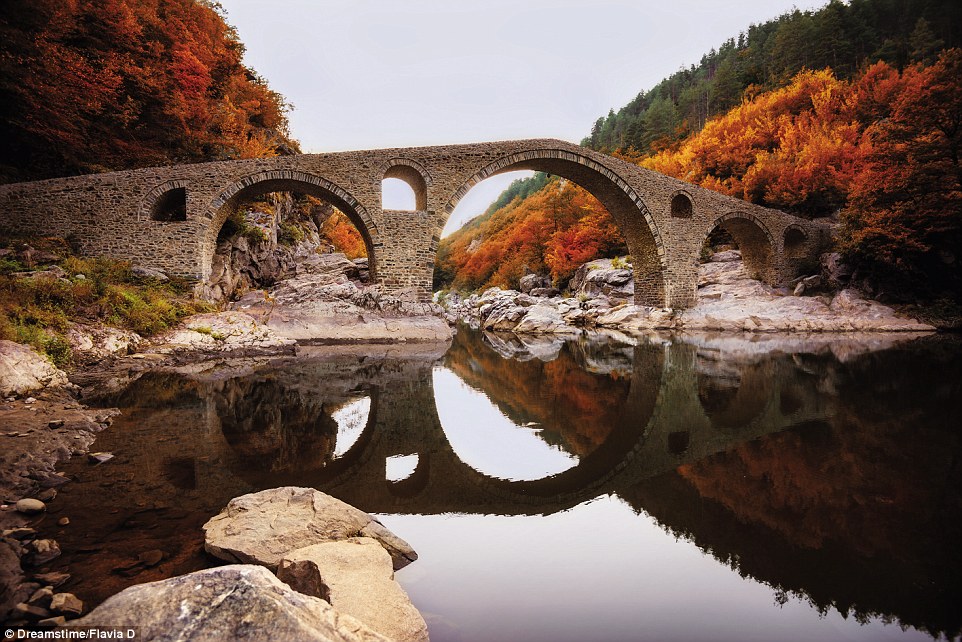 +21
The Dyavolski Most (Devil's Bridge) bridge in Ardino, Bulgaria, is one of numerous bridges that demonstrate the skill of Ottoman builders. Built between 1515 and 1518, set directly on bedrock, it carries the old Roman Via Egnacia, an ancient road that ran from the Aegean coast to northern Thrace, over the River Arda. Its main span is 185ft and the apex is 37.7ft above the stream. Its name comes from a legendary pact between its builder, Dimitar, and the Devil 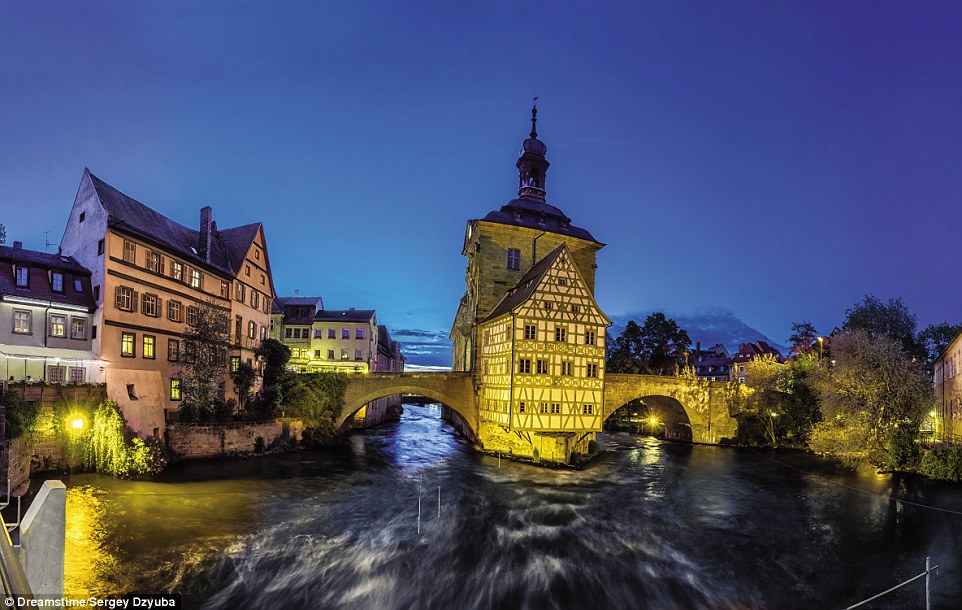 +21
Spanning an arm of the Regnitz River, the arches of Obere Brücke (Upper Bridge) in Bamberg, Germany, are separated by a small island. The bridge replaced an older structure in 1455. The building is the rococo and half-timbered style Altes Rathaus or old Town Hall, built between 1744 and 1756, with a through passage for pedestrians. The central arch, of three, was destroyed in 1945 and rebuilt in 1956 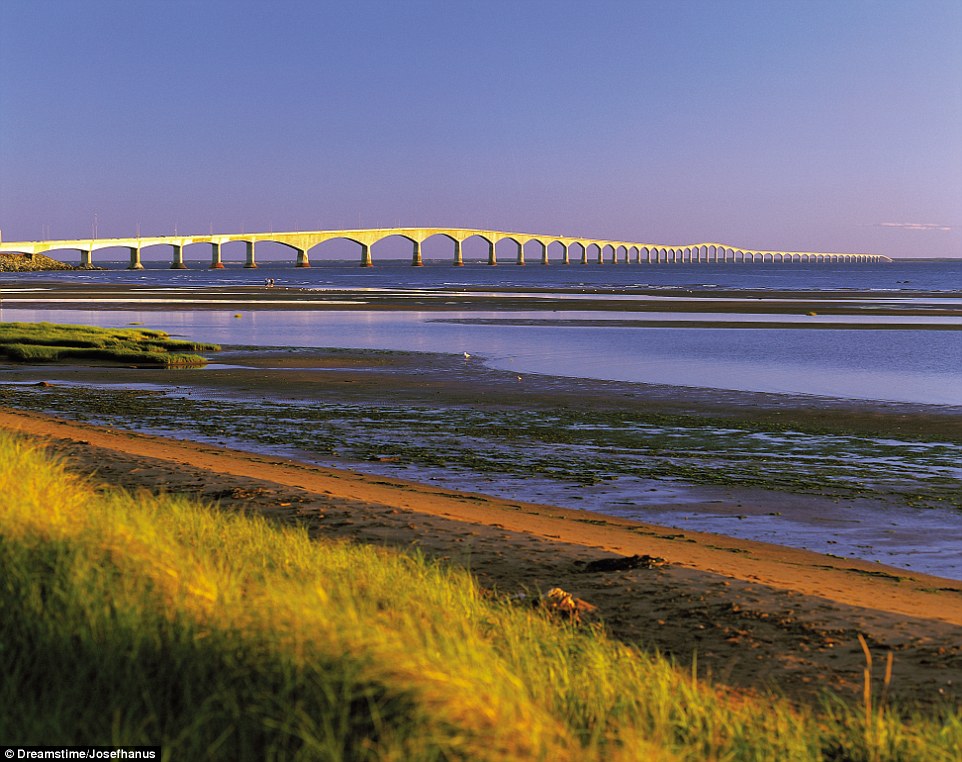 +21
The Trans-Canada Highway was extended to Prince Edward Island in eastern Canada with the opening of this eight-mile bridge in 1997. Its spans are formed of post-tensioned concrete box girders, constructed on-site, and designed for a 100-year lifespan. Protection against surface and floating ice was a major issue in construction 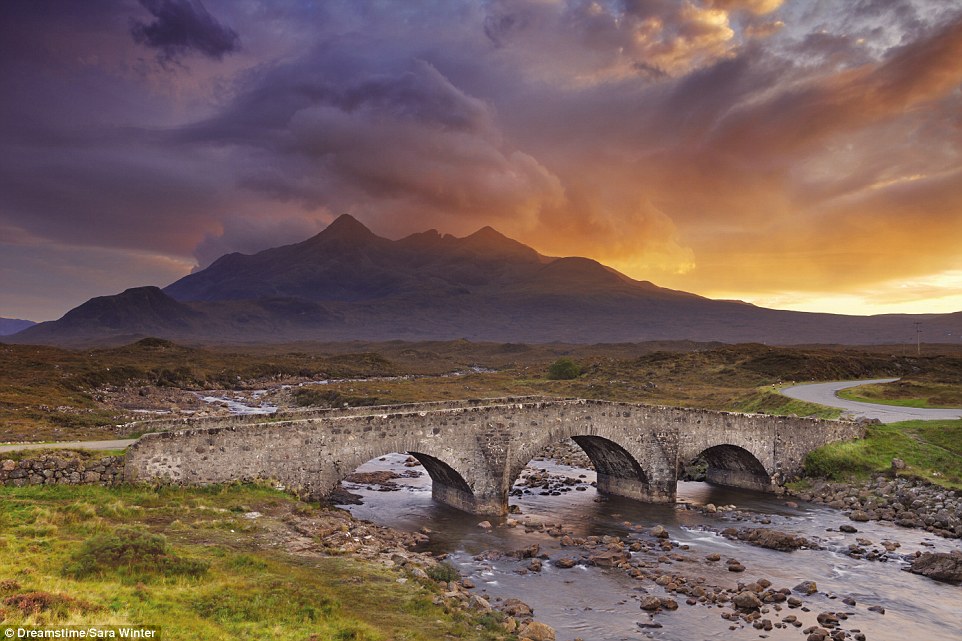 +21
The Cuillin Hills on the Isle of Skye in Scotland make a dramatic background to this bridge over the Sligachan River. It was built by Thomas Telford around 1815 as part of a road improvement scheme, of local rubblestone, in the simple, solid style of his smaller bridges 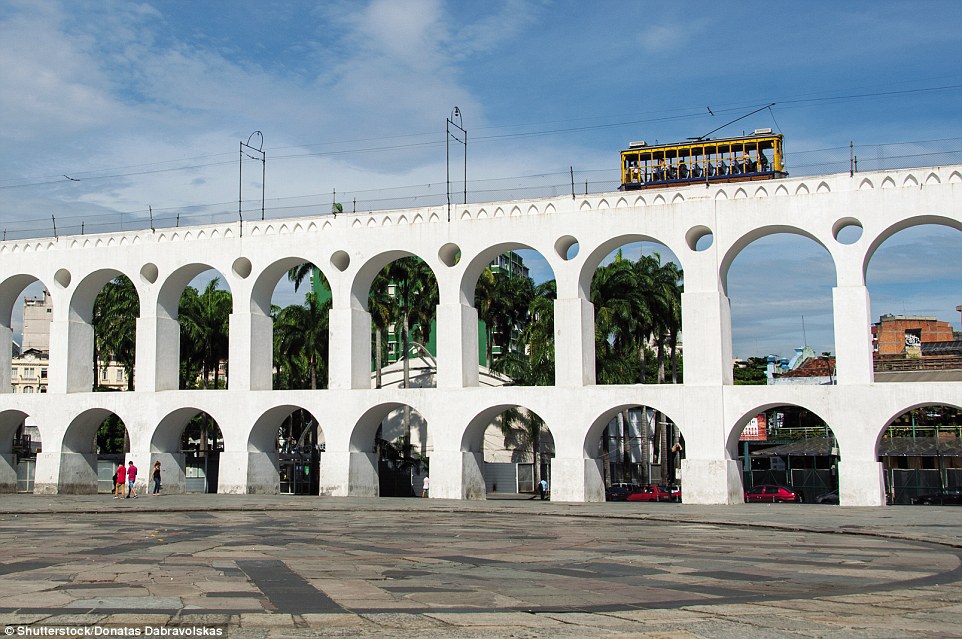 +21
Also known as the Carioca Aqueduct the Arcos da Lapa in Rio de Janeiro was inaugurated in 1750, though begun in 1723 as part of a water supply system for the city. Its 42 two-storey arches, in austere military style, stretched for 886ft, at a height of 57.7ft. By the 1890s it was redundant, but found a new role as conduit for the Santa Teresa tramline 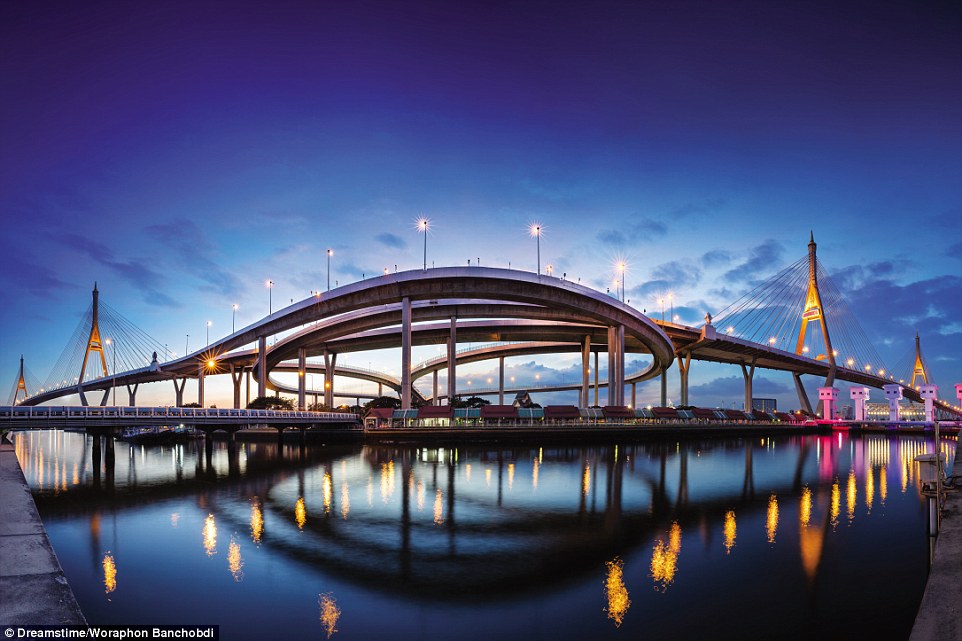 +21
Between the two cable-stayed Bhumibol Bridges to the south of Bangkok is a multi-level spiral interchange above the Chao Phraya River, linking the north-south route over the bridges with the western approach, and reaching a height of 164ft. Both built to the same design, the bridges have concrete towers in elongated diamond shape 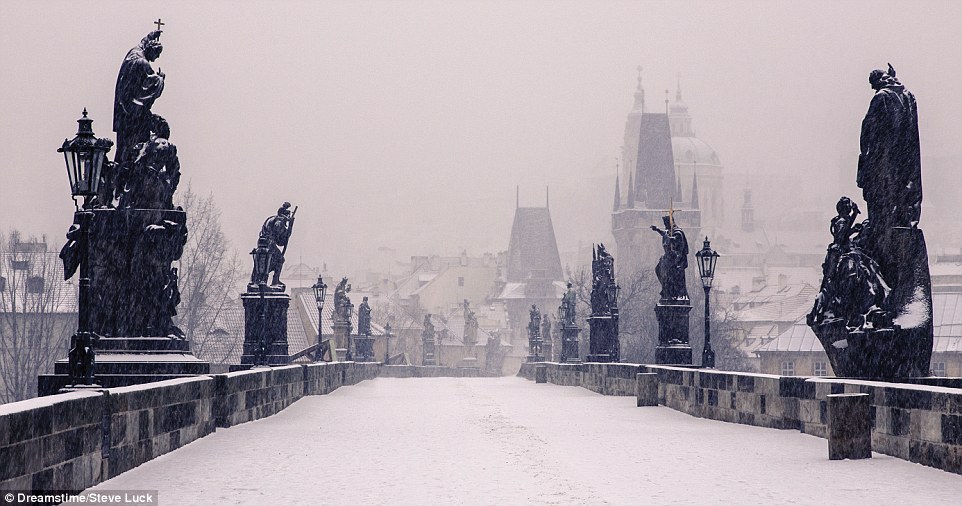 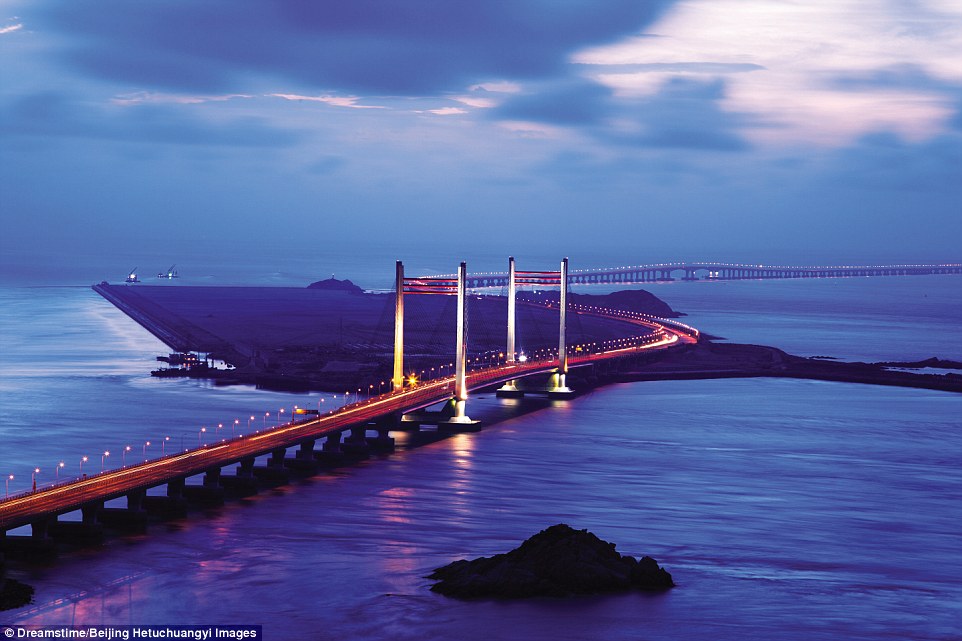 +21
The S2 Hulu Expressway takes to the sea for over 20.2 miles to link Shanghai with Yangshan Port. Opened in 2005, the S-shaped bridge is mostly of segmental concrete spans on double-column piers, with a cable-stayed main and three auxiliary navigational spans. An associated wind farm of 34 turbine towers, 446ft high, is projected 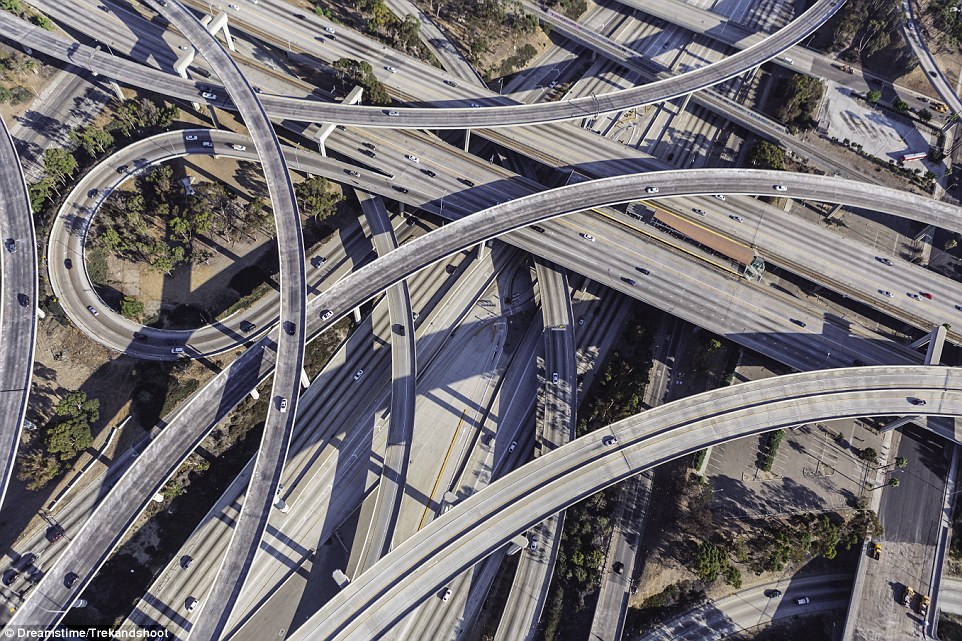 +21
Interstate Routes 105 and 110 in Los Angeles, California, meet at the Judge Harry Pregerson Interchange, where ramps and crossings on four levels allow traffic to enter and leave from any direction. Computers helped in planning the concrete construction, over 131ft high, which opened in 1994. It incorporates passage for light-rail trains and dedicated bus lanes 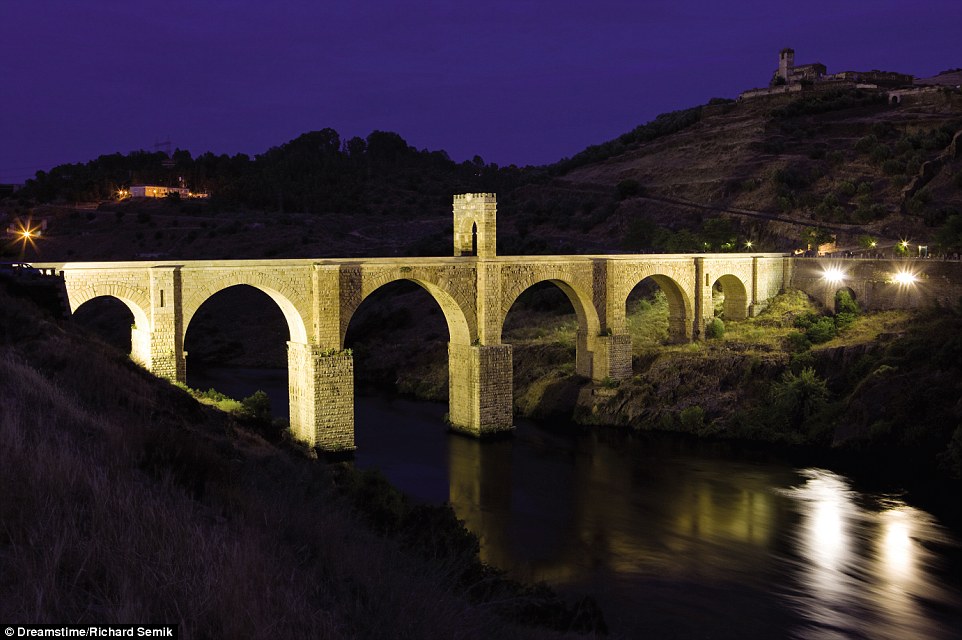 +21
Commissioned by Emperor Trajan in 98CE, the Puente Trajan in Spain was designed by Caius Julius Lacer, and built over the Tagus without mortar in 104–06CE. It has six arches, the total length is 596ft, width 28.2ft, and height 147.6ft. A triumphal arch above the central pier is inscribed: 'I have built a bridge which will last for ever' 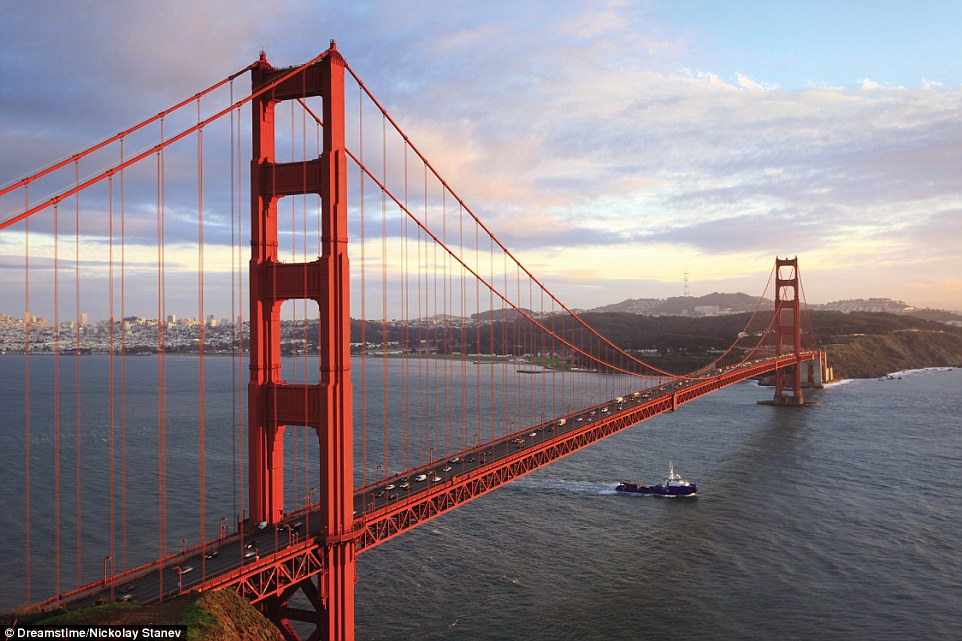