Have you experienced a variety of VANDALISM AND CRIMES

A hate crime that lasted more than 30 years from a particular neighbor.

Neighbors can make a big difference when it comes to feeling comfortable in your own home. When you’re surrounded by friendly people, it makes your neighborhood all the more safe and desirable.

If you have bad neighbors, though, it can seem like your home is practically unlivable. Some people may even be tempted to move, as there’s not much you can do about the people next door. If you think your neighbor is doing you wrong, what do you do? Report his transgressions to the police? Confront him yourself? For some homeowners, the answer is “catch him in the act. Easier said than done.

If you ask people across the country whether they have been a victim of a bias crime because of their race, tens of thousands have stories to tell.

That figure does not include hate crimes motivated by more than one bias—an assault against a black woman, for example, may be motivated by their race.

Intentional property damage may be considered a form of violence, albeit one usually (but not always) less reprehensible than violence which does bodily harm to other living beings, ie. shooting 4 beloved pet dogs. For example, loosening the tubes of the transmission cooler to fail, become inoperable may qualify as both property damage and lead to bodily harm. On a similar note, certain forms of property damage may prevent bodily harm, such as breaking a piece of machinery like a ratchet puller, that was about to injure a person, after the lug nut was taken out.

Some argue that property damage signals a willingness to do bodily harm or otherwise intimidates the free flow of communication in political oreconomicdebates. To obtain a conviction the prosecution must ordinarily prove that the accused damaged or destroyed some property, that the property did not belong to the accused, and that the accused acted willfully and with malice. In the absence of proof of damage, the defendant may be guilty of Trespass, but not vandalism. If there is no proof that the defendant intentionally damaged the property, the defendant cannot be convicted of the crime but can be held liable for monetary damages in a civil action.

It started back when this relative of mine began  building his house out in the country. He noticed some electrical wirings inside the house has been cut and tampered. His brand new car’s finish poured with acid. The heat pump connections has been loosened to make the freon escape and render the air conditioning to mal function to this day as he reported to me.

Then he loosened the the plumbing to the solar water heater, making a mess inside the house. His modus operandi is to loosen attachments, little things that will later on lead to bigger damages. Like loosen the screw of the transmission cooler twice, rendering the transmission to leak transmission oil and therefore a malfunction of the transmission itself. The motorhome, at present is un operable, since Auch did this vandalism twice.

Damage to the motorhome include the tamper of the water tank being busted and broken together with the CV joints pierced and needed to be replaced. My relative knew it was him, proof or circumstance is the M.O. When my cousin was constructing a wire fence between their common boundary with a ratchet puller, he loosened the bolt of the main pulley, so the next time my relative use it, will explode in his face. There are no other neighbor with the same access as him. 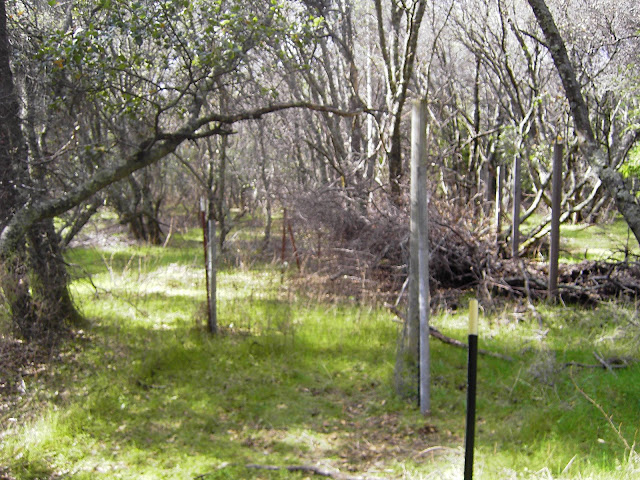 Looking to the west, the difference of fence line is apparent. Also, the neighbor trash my cousin’s side of the fence. Auch’s house is in the background and quite close to the fence line, and that could explain his motive for encroachment of about 8’ to 18’. The length of that encroachment is 665’ long, authenticated with a survey.

Looking westward, my cousin’s side of the property is used as a trash bin by the Auchs. One of the wood stakes located at the right of the picture was thrown assunder. My cousin have to trust this large post installed by Auch as the beginning of his south boundary. 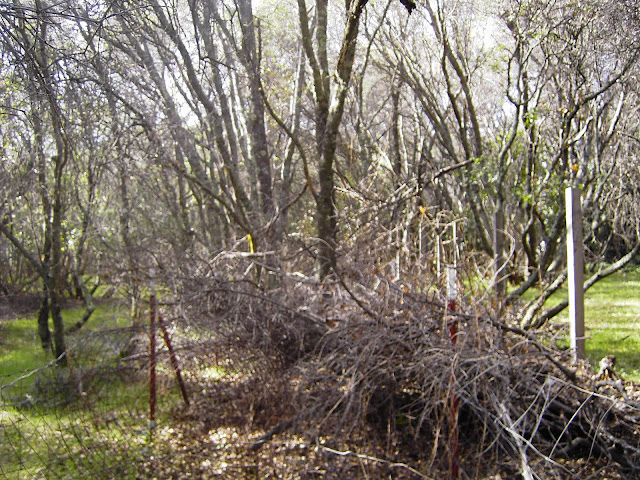 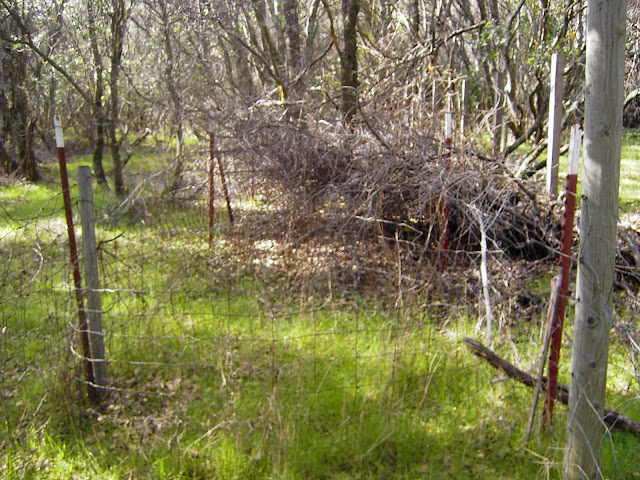 View to the east, green fence post was set on (true boundary) the remaining survey stakes, made straight by a taut rope. 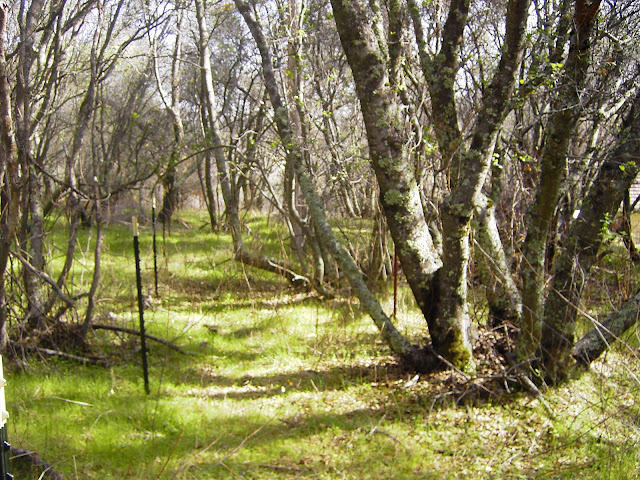 The red fence post was installed by Auch that encroached on my cousin’s property as much as 16’. This rope solution was made because of some intermediary stakes were missing, vandalized and stolen, including the corner monument. Later on the monument appeared, but on the wrong spot. This encroachment by Auch run the whole length of the property (665 feet long) until the survey was made. 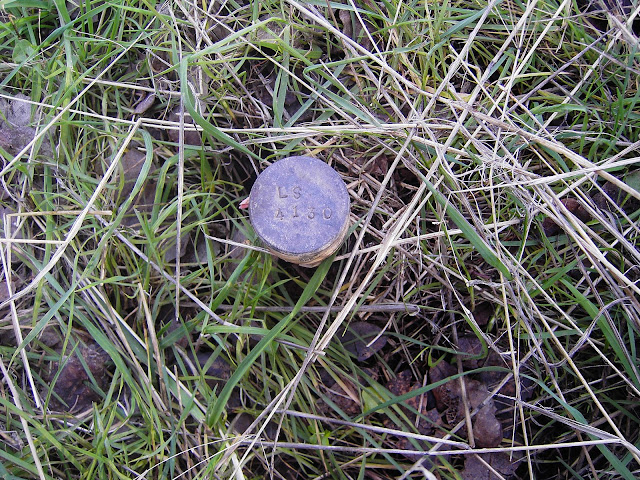 Monument survey reappeared after it was reported to the Sheriff. The theft was solved, but the monument marker was placed in the wrong place, and therefore compromising the integrity of the survey pin/monument.

Worst of all, the neighbor killed four of my cousins pet dogs inside the cousins property with a silenced 22 caliber rifle. Sassy, a beautiful german shephered that meets my cousin on the corner of the property by the main road every time he is back from work. 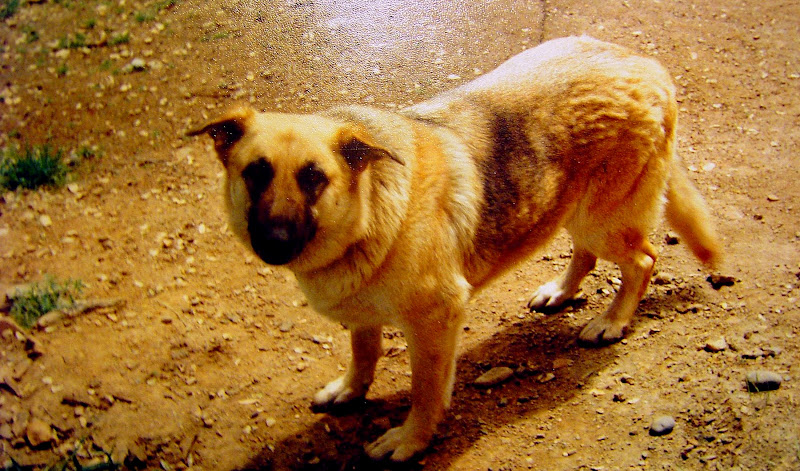 Sassy the beloved dog. (shot to death inside my cousin’s property) 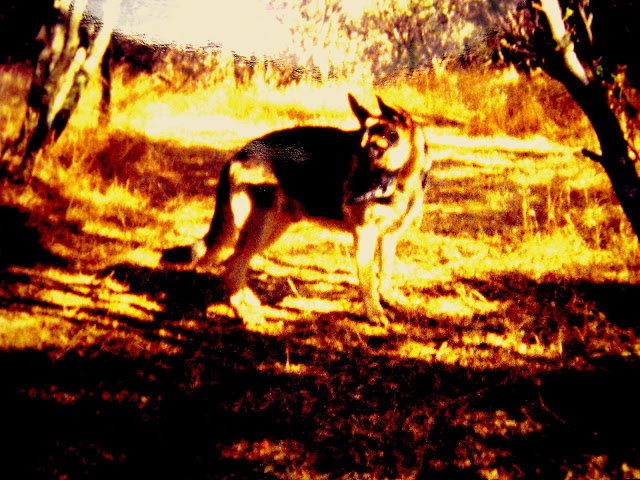 Max was shot to death inside my cousin’s property. Two other dogs met the same fate, Bear in 1980, and Willie the Rottweiler shot in the head as he stuck his head outside my cousin’s garage door in 1999.

Another dog, Mickey the Akita was tormented with pellet shots.

That neighbor shot his roof, to make it leak and thus propagate black mold. After replacing the roof, he observed the line of fire and the trajectory lead from the house of the nasty neighbor. The cost of the roof replacement was $37,000. Not only that, the chimney pipe and cover are riddled with rifle shots. My relative is at wits ends and leave it to you readers the answer to his problems and how to deal with this injustice, as the police will not bother due to the Statute of Limitations expirations on these crimes.

Now it is beginning to happen again, as his progenies are doing the same thing all over again, around the property. Cameras abound my cousin’s house, so that vandalism from this particular neighbor are now limited to the range and detection of the cameras.

So now, vandalism like destruction of plantings happen at the outskirts of my cousin’s house. Oh now, he makes calls in the wee hours of the morning and then hang up.

The neighbor’s name is Steve John Auch together with his son Perry John Auch. Steve is now in his late sixties, but is still active in his vandalism with Perry Auch as his surrogate. His telephone. His address is 1520 Winding Oak Ln., El Dorado Hills, CA. 95762. Perry’s photo below

First, there are missing cases that police records don’t capture, because more than half of victims don’t report to police. That’s due to a variety of reasons, such as mistrust in police, a fear of not being taken seriously or uncertainty if they experienced a crime.

Another key problem is that police training on hate crimes varies very widely. Only a dozen states have statutes requiring police academies to provide hate crimes training, and even if recruits do get instruction, it’s sometimes for as little as a half an hour.

To improve hate crime tracking, “You have to have a combination of training, executive leadership, and some kind of infrastructure that is sustained and continuing,” Brian Levin, a hate crimes researcher, told ProPublica.
What About Prosecutions?

Hate crimes are notoriously difficult to prosecute, because attorneys must prove the defendant’s intent was based on bias. Adding hate crime charges can introduce layers of complexity to otherwise straightforward cases of assault or vandalism. A ProPublica investigation found that of the nearly 1,000 hate crime cases reported to police in Texas from 2010 to 2015, fewer than 10 were successfully prosecuted.

Some cities, such as Boston and New York, have dedicated bias crime units that provide expertise and added scrutiny to hate crime cases in order to build evidence for the prosecution. But in many places, it’s usually up to local police to investigate these crimes.

Sometimes, the FBI will send investigators in order to prosecute cases in federal court. But a News21 analysis found that just 100 hate crimes were prosecuted as federal crimes from January 2010 to July 2018.

Intentional property damage may be considered a form of violence, albeit one usually (but not always) less reprehensible than violence which does bodily harm to other living beings, ie. shooting 4 beloved pet dogs. For example, loosening the tubes of the transmission cooler to fail, become inoperable may qualify as both property damage and lead to bodily harm. On a similar note, certain forms of property damage may prevent bodily harm, such as breaking a piece of machinery like a ratchet puller, that was about to injure a person, after the lug nut was taken out.