From a prosthetic arm to a Michelin-star meal, 3D printing has already been used to create a range of weird and wonderful objects.
And the latest construction made using the technology takes things to a whole new level.
Researchers have created the world's first 3D-printed bridge, which they say could be the future for construction. 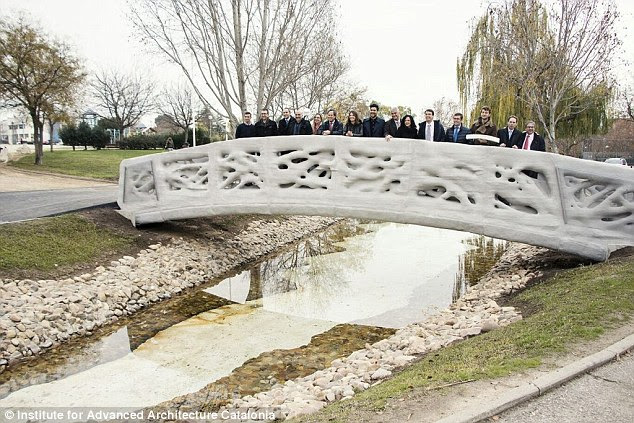 WHAT IS 3D PRINTING?

3D printing is a way of making three dimensional solid objects from a digital file.
The creation of 3D objects is achieved by laying down successive layers of material until the object is created.
Each of the layers is a very thinly sliced horizontal cross-section of the final object.
First you make a virtual design of the object you want to create.
The virtual design is on a computer file which can be created by using a 3D modeling application.
A 3D scanner can then make a 3D digital copy of the object. The extraordinary creation, which resides in a park in Madrid, is 12 metres long and 1.75 metres wide.
It is printed on micro-refined concrete.
The Institute of Advanced Architecture of Catalonia (IAAC) was in charge of the architectural design of the bridge.
Ms Areti Markopoulou, who led the team, told MailOnline: 'In traditional architecture there is a lot of waste material which you cannot remove, however, with 3D printing you can control where the material is deposited.
'Usually we are limited to simple geometries in construction because it is difficult and expensive to create complex moulds.
'With this bridge we were able to experiment with complex forms that appear in nature and we made a design that would have been very difficult by conventional means.'
The researchers have been trying to 3D print structures for 15 years.
Ms Markopoulou said: 'It is a really important development in architectural innovation and experimentation.'
They are hoping this bridge will open up more opportunities for using 3D printing in civil engineering.
First 3D printed pedestrian bridge is designed for park
'Prefabrication minimises costs, it is quicker and more sustainable', Ms Markopoulou said.
The bridge was inaugurated on 14 December in the urban park of Castilla-La Mancha in Alcobendas, Madrid.
During construction, waste was reduced by recycling of raw materials during manufacture. 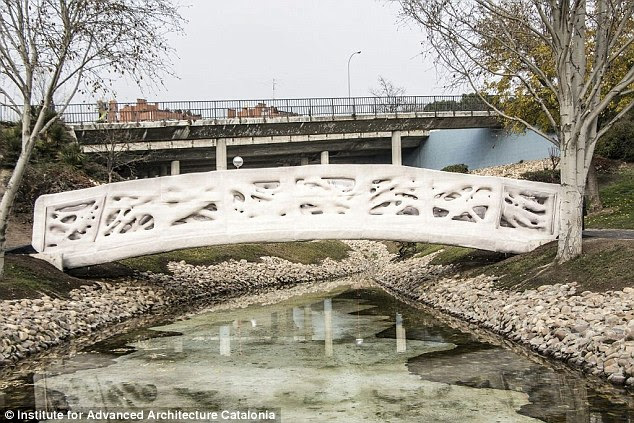 The bridge, which is in a park just outside of Madrid, is 12 metres long and 1.75 metres wide. It is printed on micro-refined concrete
The bridge is made up of eight different parts, each made of concrete powder micro-reinforced with thermoplastic polypropylene.
Ms Markopoulou said: 'This is an evolutionary technique which involves depositing layers of material one sheet on another.
'Instead of using ink like a normal printer, we are depositing construction material.
'Bridges are often used in to practice architectural principles and so it was an important exercise for experimentation.'
The IAAC worked with architects, mechanical and structural engineers, and municipal representatives to bring the design to life. 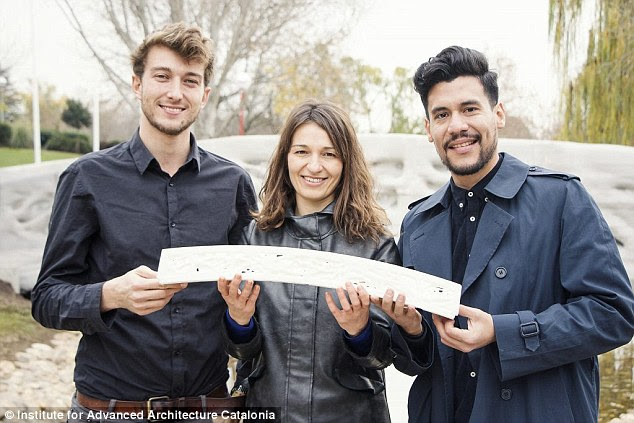 The researchers used an evolutionary technique which involves depositing layers of material one sheet on another. Pictured from left to right are Alexandre Dubor, Areti Markopoulou and Rodrigo Aguirre 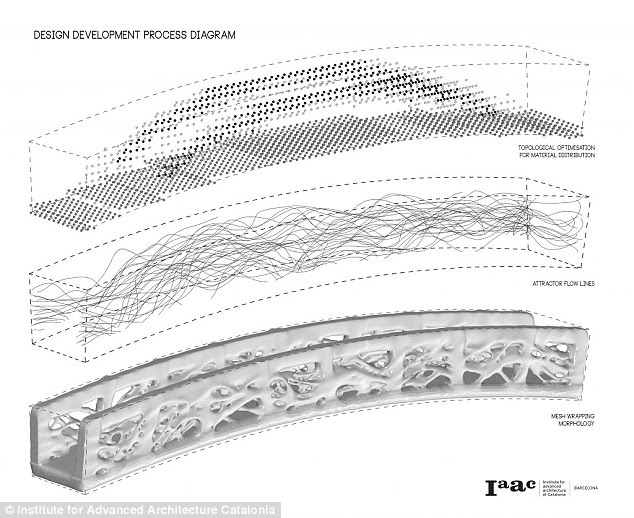 The bridge is made up of eight different parts, each made of concrete powder micro-reinforced with thermoplastic polypropylene
The construction relied on a massive 3D printer - the first of its kind -  which can bind sand to solid rock.
'The computational design also allows to maximize the structural performance, being able to dispose the material only where it is needed, with total freedom of forms', a representative from the IAAC said.
The structure maintains porosity 'thanks to the application of generative algorithms and challenging the traditional techniques of construction,' the representative said. 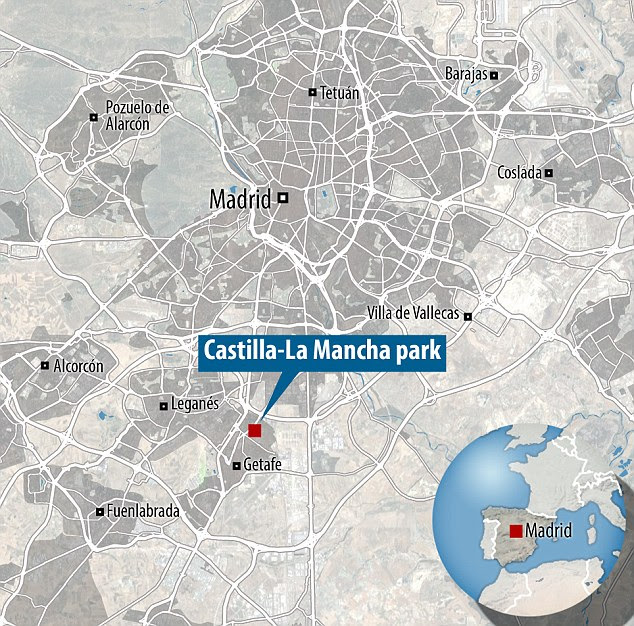