How much you have to earn to be considered middle class: Singles need $24,000 to fall into the bracket but a family of five is stuck there until they make more than $160,000

Which class do you belong to?
It's an antiquated question but one which countless Americans have no doubt asked themselves at some point.
Most rightly assume that they belong to the middle, not earning quite enough to consider themselves flush but certainly more fortunate than others.
Nonetheless, the lines of eligibility are somewhat fuzzy. When are you considered upper class and how much income would you need to lose to slip down?
The Pew Research Center sought addressed the gray area by studying the results of the 2014 American Community Survey in a report published last year.
It categorized middle income Americans (those earning two thirds to double the national average) as middle class to find the answer.
According to its formula, a single person earning anything between $24,042 and $72,126 in 2014 was middle income but a family of five had to earn more than double that to fall in to the same category.
Scroll down to use the class calculator 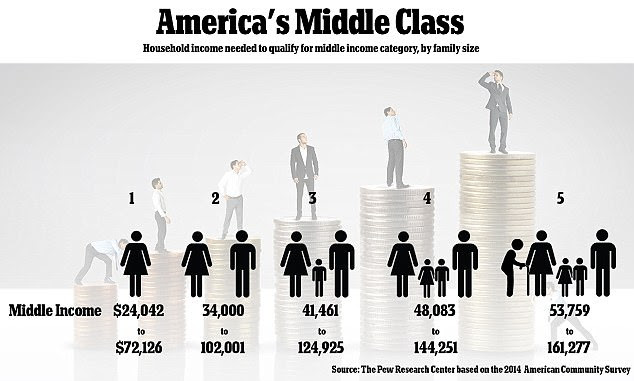 
In Mississippi, a single person earning $22,000 was middle class. A pre-tax income of $70,000 put you in the upper income tier.
The research also showed that the middle class was shrinking. There was a shift in almost every area polled and it was almost a direct split between people becoming richer and poorer - of the 229 areas which were surveyed, there was an upper income increase in 172 and a lower income increase in 160.
There are now fewer people in the middle class across the country as there are in the lower and upper classes combined. As of 2015, half of the population was middle class, 29% were lower income and 21% were upper income.
There is also widespread disparity between the average household income per ethnicity.
According to the US Census Bureau's 2016 data, Asian households had the highest average income with $77,166 last year.
White Americans were the second richest with an average income of $62,950.
The number dropped almost $20,000 for Hispanics whose average household income was $45,148 and it was even lower for African Americans who recorded an average household income of $36,898 - almost $20,000 lower than the Pew Center's 2015 national average.