The Russian Navy is set to upgrade its nuclear-powered Project 11442 Kirov-class battlecruiser Pyotr Veliky with a new hypersonic anti-ship cruise missile. The new Mach 5.0-capable 3M22 Zircon missiles would replace the ship’s existing 390-mile range P-700 Granit supersonic anti-ship missiles.
“The Pyotr Veliky will start repairs in the third or fourth quarter of 2019. Repairs and upgrade are due for completion in late 2022, the ship to be equipped with Zircon hypersonic anti-ship missiles,” a Russian defense industry source told the TASS news agency on February 19. “The missile is undergoing development testing and will enter service if it passes,” he added.


Russia’s nuclear-powered guided-missile cruiser Pyotr Velikiy (Peter the Great) is to be armed with hypersonic cruise missiles by 2022. Ultra-secret Zircon missiles are rumored to be passing final tests before being considered for introduction.

“[GM heavy cruiser] Pyotr Velikiy will go into dry dock in the third quarter or in late 2019. General overhaul and ordnance alterations are planned to be completed by late 2022,” a source in Russia’s shipbuilding industry informed TASS.

The source also confirmed that a prototype of the Zircon hypersonic cruise missile is undergoing government flight development tests. Once the tests are confirmed successful, the missile is going to be presented for state approval.
Another source told TASS that the heavy cruiser is going to be refitted with the brand-new multipurpose 3S-14 vertical launch systems.
Reportedly, each of the 10 3S-14s in production right now has eight missile containers that can house three types of anti-ship missiles: Zircon, Onyx or Kalibr.

Rostov-on-Don submarine launches several 3M-54 Kalibr © / Sputnik
Altogether, the cruiser will be armed with 80 anti-ship missiles, enough to engage any existing naval force globally.
Modern Russian anti-ship missiles, like Onyx, have an operational speed of up to 2.6 Mach (750 m/s or 2,700 km/h). The sea-based Kalibr cruise missile travels at a mere 0.9 M speed, yet when approaching the target its warhead speeds up to 2.9 M.
No technical information is currently available about the upcoming hypersonic cruise missile, reportedly being developed in at least two, airborne and seaborne, options.
Its top speed is thought to be at least 5-6 Mach, yet possibly could reach over 10 Mach maximums.

Onyx missile at MAKS Airshow in Zhukovskiy
The nuclear-powered guided-missile cruiser Pyotr Velikiy is the world’s largest non-air-capable military vessel. Its inventory includes several hundred missiles, including anti-ship cruise missiles with nuclear warheads and various types of air-defense missiles, torpedoes, anti-submarine armament and artillery.
In another project, 11442, the nuclear-powered guided-missile cruiser Admiral Nakhimov has been undergoing a general overhaul since late 2014 and will be totally refurbished and rearmed with brand-new missile systems ahead of the Peter the Great going into dry dock.

On Thursday, the Pentagon used the largest non-nuclear bomb in its arsenal against a large group of Daesh terrorists in Afghanistan.

US Drops ‘Mother of All Bombs’ on Afghan Tunnels It Once Funded
The 22,000-pound GBU-43 bomb dubbed “the Mother of All Bombs” was dropped from a MC-130 plane in Nangarhar Province, targeting underground facilities and a system of tunnels used by terrorists.The GBU-43/B Massive Ordnance Air Blast (MOAB) is a large-yield conventional non-nuclear bomb considered to be the most powerful non-nuclear weapon ever developed at the time of its creation. The cost of a single MOAB is $16 million.
This was the first time the bomb was dropped in combat. It has been in service since 2003.
The Afghan Defense Ministry reported that at least 36 Daesh militants were killed in the bomb attack. However, later it was reported that 82 militants were killed as a result of the bomb drop.

US Drops ‘Mother of All Bombs’ in Show of Force ‘Designed for Russia, Syria, DPRK’
Nevertheless, the results produced by such a powerful weapon were not sufficient. The problem is that the “the Mother of All Bombs” was not designed to destroy fortified underground facilities. Like the BLU-82 Daisy Cutter bomb from the Vietnam War era, the basic operational concept of the GBU43 is to clear heavily wooded areas for landing helicopters and to clear mines.Commenting on the US bomb strike, Sputnik contributor Andrei Kots noted that it has rather a “psychological effect.”
“Honestly speaking, that was a blast. But if the potential enemy has a capable air-defense system, the GBU-43 will be useless, because a MC-130 would be taken down even before reaching the drop area,” he wrote.
FOAB
The GBU-43 is not the heaviest bomb in history though. This is the GBU-57A/B Massive Ordnance Penetrator (MOP), a precision-guided 14,000-kg bunker buster bomb in service with the US Air Force.
The MOP can penetrate as deep as 60 meters under the ground and up to 19 meters of armored concrete. The first explosive test of the GBU-57 took place in 2007. The USAF received the first shipment of 20 bombs in 2011. The MOP has not been used in combat so far.
However, the most powerful non-nuclear bomb was developed in Russia. The Aviation Thermobaric Bomb of Increased Power (ATBIP) was field-tested on September 11, 2007. 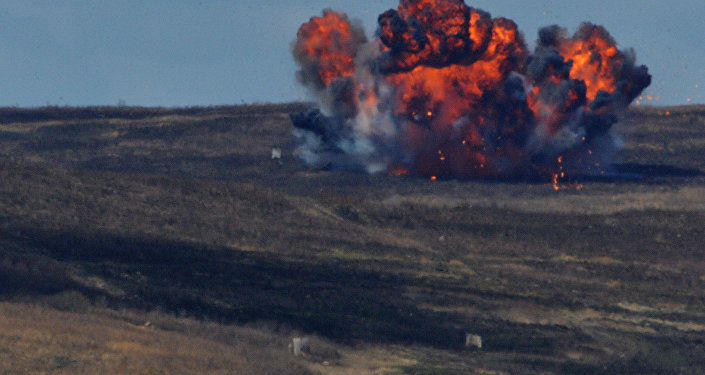 Russia’s ‘Father of All Bombs’ That Surpasses US MOAB in Almost Every Respect
Russia journalists immediately dubbed the ATBIP as “Kuzma’s father” and the “Father of all Bombs” (FOAB).It has a destructive power equivalent to 44 tons of TNT against 12 tons of TNT in the case of the GBU-43. It has a blast radius of over 300 meters compared to the MOAB’s 150-200 meters.
Information about the FOAB is secret, including the number of units produced and their deployment locations.
According to Russian military expert and journalist Viktor Murakhovsky, bombs with a destructive power equivalent to the MOAB were used by the Soviet Union during World War II.
According to the expert, in comparison to the GBU-43, the destructive radius of the US bomb is equal to the epicenter of the blast produced by the FOAB.
“On open terrain, the MOAB has a destructive radius of just 150-200 meters. At the same time, the FOAB produces a blast with an epicenter of 150-200 meters and its blast wave reaches beyond this area. The Russia bomb is destructive at a distance of up to 2.5 km,” Murakhovsky told Sputnik.
Heavy Artillery
Heavy-caliber cannon artillery follows aviation bombs in terms of power, as well as absence in real combat conditions.

‘PR Trick’: New US Hypersonic Projectile Not Yet a ‘Superweapon’
During the Cold War, the US and the Soviet Union heavily invested in developing capable artillery cannons. Both powers wanted to develop a weapon to deliver a low-yield tactical nuclear projectile at relatively small distances.In the USSR, the 2s7 Pion 203-mm self-propelled cannon and its modification the 2s7 Malka were developed. Despite the fact that they were designed to fire special projectiles, several types of non-nuclear shells were developed. For example, the 110-kg 3FOF35 high-explosive projectile could be fired at a distance of up to 50 km. 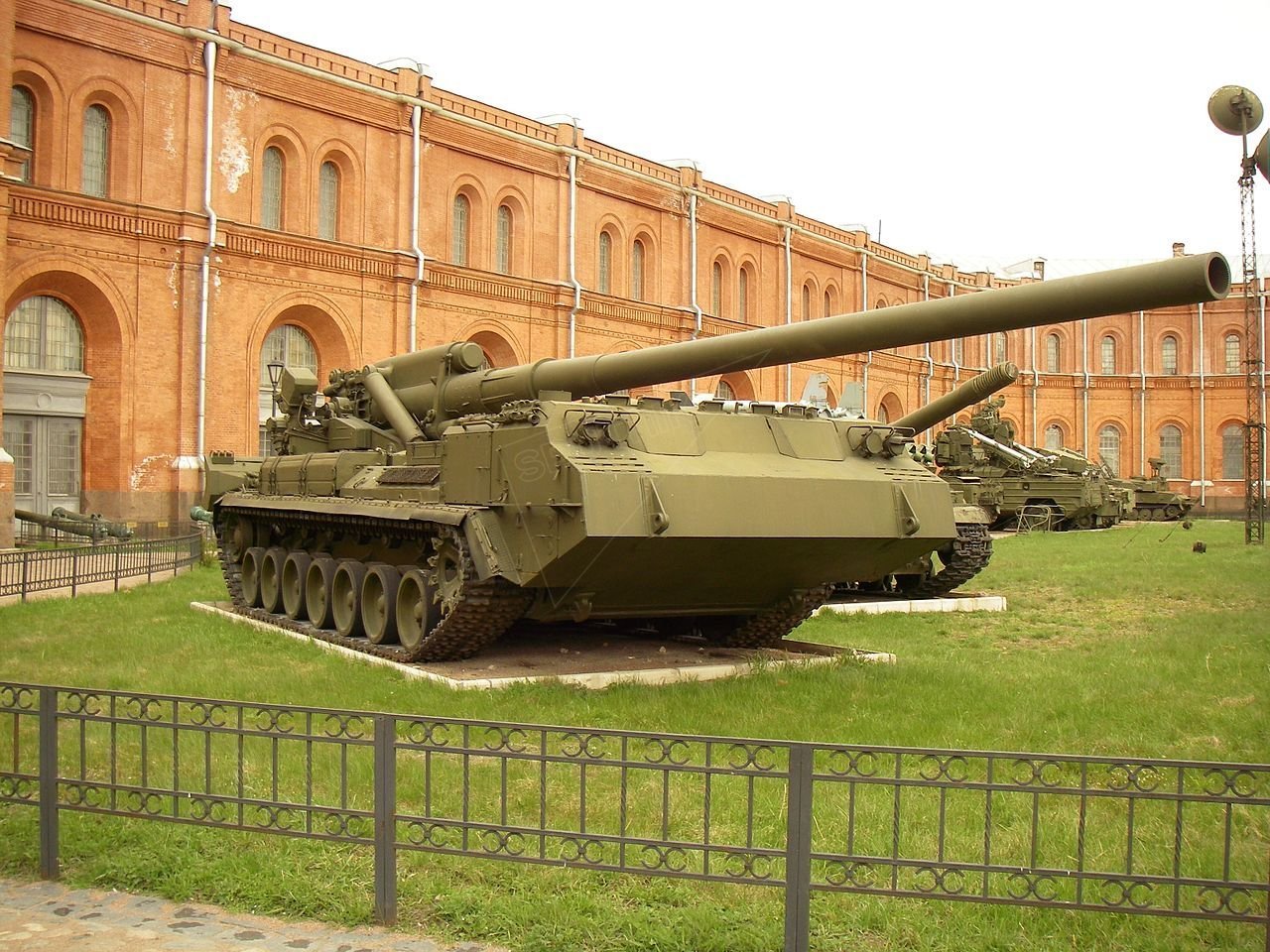 203-mm self-propelled gun 2S7 «Pion» in Saint-Petersburg Artillery museum
However, those weapons have significant disadvantages. There were few firing ranges where those artillery cannons could fire at medium and long distances. Moreover, both self-propelled cannons had small ammo reserves. Nevertheless, the Russian Armed Forces still have 300 Pion and Malka units, which have never been used in combat.
Western countries actively developed heavy-duty artillery systems in 1940-1945. Nazi Germany had the Karl 600-mm self-propelled mortars and the Dora 800-mm railway gun. In particular, they were used during the Great Patriotic War near Sevastopol and Brest Fortress. 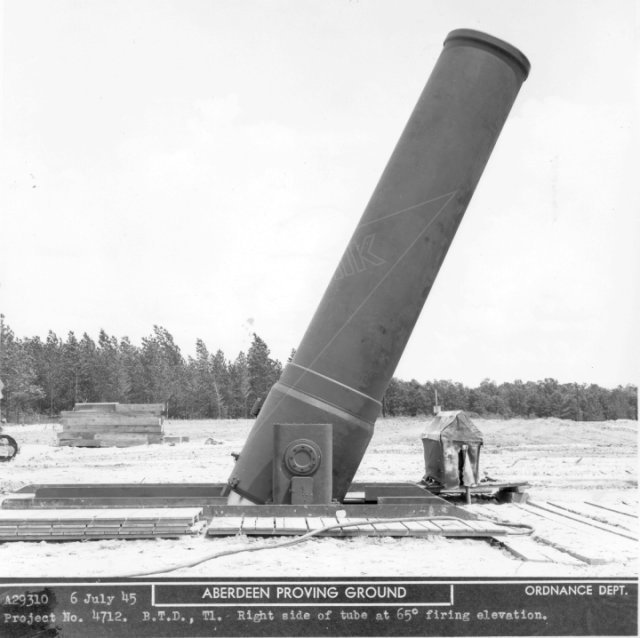 36 inch mortar in use by the USA during World War II for test firing bombs.
In 1944, the US tested the Little David mortar. It had a caliber of 914 mm and a weight of 88 tons. However, the cannon did not enter service.
‘Caspian Monster’
During the Cold War, the Soviet military tried to develop an efficient weapon against US aircraft carriers. One of the most unusual developments was the Lun missile-carrying ekranoplan, some kind of a hybrid between a plane and a vessel.
It was a ground effect vehicle. It flew using the lift generated by the ground effect of its large wings when close to the surface of water.

Lun-class (harrier) ekranoplan (NATO reporting name Duck) at the naval station in the town of Kaspiysk, Russia
The Lun had a length of 75 meters and a height of nearly 20 meters and could reach speeds of up to 500 kmh. American analysts dubbed the vehicle the “Caspian monster.” The prototype was commissioned on July 16, 1986.
Because of an extremely low altitude, the Lun could bypass the air defenses on the enemy ship. It was expected to come close to the enemy aircraft carrier group and attack it with Moskit supersonic anti-ship missiles. Each missile had a 300-kg warhead and could travel at altitudes of 7-20 meters.
The only model of this class ever built, the MD-160, entered service with the Black Sea Fleet in 1987. It was retired in the late 1990s and is now sitting unused at a naval station in Kaspiysk.
Underwater Missile
The Shkval missile-torpedo is another Soviet-designed aircraft carrier killer with unique capabilities. It entered service with the Soviet Navy in 1977. Initially, it was armed with a 150-kiloton nuclear warhead, and then a conventional warhead was designed.

© PHOTO: PRESS-SERVICE OF JSC “PO “SEVMAS
Russian Navy to Receive New Deep-Water Torpedo in 2018
The main feature of the Shkval missile-torpedo is its capability to travel at nearly 370 kph (200 knots) in a cavitation pocket. It was powered by an underwater solid-fuel jet engine deliver higher thrust.For decades, the Shkval was second-to-none among other torpedoes. However, in 2005, Germany said it had completed development of the Barracuda missile-torpedo capable of reaching the same speeds.
The Achilles’ heel of such weapons is its limited operation range. The Shkval is capable of hitting a target at a distance of only up to 13 km.
Posted by ASC at 10:05 AM