How one man paddled 30,000 miles to escape Hitler's rise to power in Germany and reached Australia in 1939... where he was greeted as an ENEMY 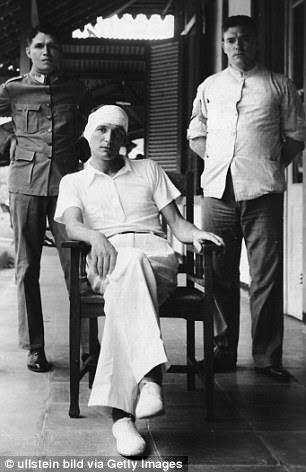 +7
Oskar Speck set out from Germany on a kayak in 1931 on a mission to reach Cyprus to find a job in a mine. He ended up going 30,000 miles to Australia (pictured here in Indonesia)
In 1932 as Oskar Speck hopped into his kayak and pushed out into the Danube River he was broke, having watched his business fall apart in a recession-hit Germany.
Seven years later he finally ended his journey on Australia's Saipai Island, under arrest on suspicion of being a Nazi spy after war had broken out in Europe.
In between he had been shot at and robbed in the Persian Gulf, partied with the British in India, and was almost beheaded by tribesmen in Papua New Guinea.
All the while he paddled across oceans in a kayak never designed to see the open sea, often going 48 hours without sleep as he battled towering waves, lashing monsoons and bone-cracking bouts of malaria.
In total the journey would see him travel 30,000 miles - the longest kayak journey ever completed and a record that stands to this day.
Speck had never intended to enter the record books when he set out in May of 1932, but simply to get out of a country that was crippled with post-war debt, according to an account in Vanity Fair.
The year before he began, Speck had been forced to fire the 21 employees of his electrical contracting company as the business went under.
With few possessions save an 18ft collapsible kayak named Sunnschien and no reason to stay, he set his sights on Cyprus and a job in a copper mine he was sure waited for him there.
Travelling on a tight budget, with limited supplies of tinned meat, chocolate, cheese and condensed milk, Mr Speck paddled down the Danube and Varda rivers to Bulgaria and Yugoslavia, the Telegraph reports. 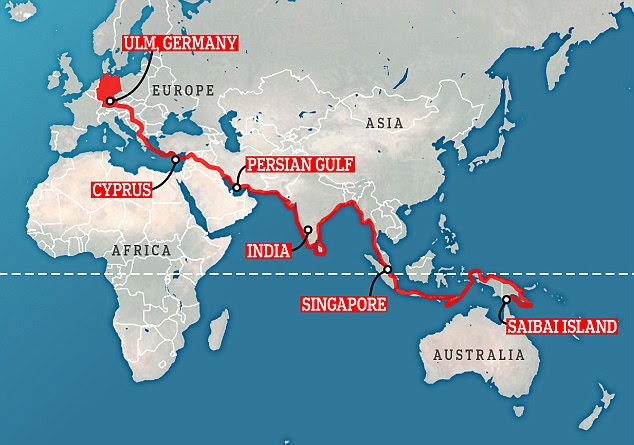 +7
Speck's journey saw him shot at and robbed as he crossed the Middle East, party with the British in colonial India, and almost beheaded by tribes on New Guinea
After reaching the Mediterranean at Thessalonika in Greece, Speck rigged splash guards and a 16sq ft sail before island hopping down the Mediterranean coast to Turkey in constant fear of capsizing because he was unable to swim.
From Turkey he crossed his first stretch of open ocean to Cyprus, arriving in 1933, but all thoughts of a job in a mine were already behind him.
In fact, he never even looked for employment, and instead began plotting a route that would take him across the Middle East and to India.
The first step was a sleepless 48 hour paddle across to Syria, where he was forced to catch a bus - his only substantial overground trip - to the Euphrates River, which he used to travel through Iraq and into the Persian Gulf.
During this time he recounted being swooped by ravens, shot at by the locals, and robbed of his kayak which he only got back by bribing local policemen.
Once in the Gulf, he recalled chasing sharks around for fun while struggling to survive with little food and water - scavenging dates from the shoreline.
Forced away from the shore by high winds, on one occasion he found himself stranded on a sandy island for 14 days with only a decomposing body for company.
In Iran he caught malaria for the first time which delayed him by several months. He was also forced to wait for a new kayak to be shipped from Germany after his original was shredded in sandy winds. 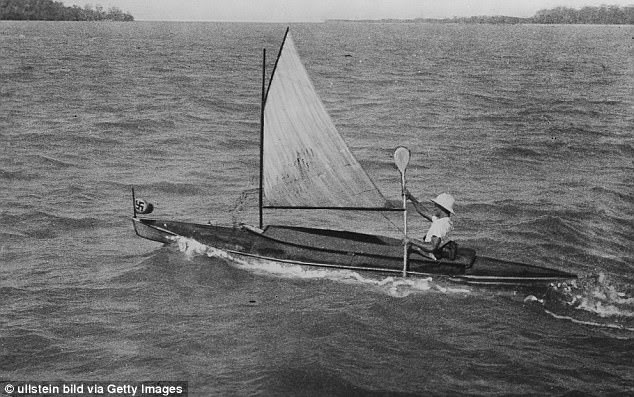 +7
The early parts of Speck's journey were financed by relatives, but in India he gained benefactors in the British. He eventually ended up sailing under a Swastika flag (front of his boat) after the Nazis took power in Germany and lent him money 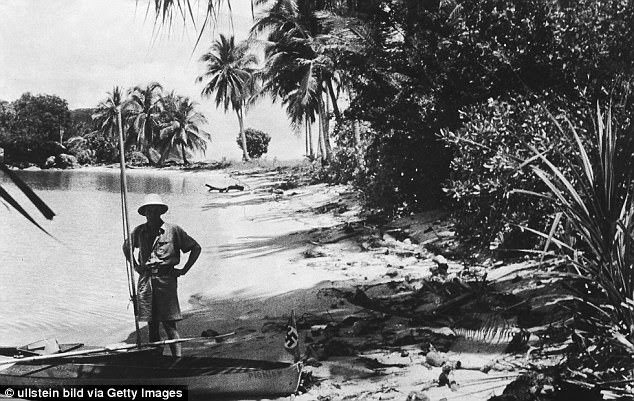 +7
While sailing around New Guinea he was welcomed as a God by some tribes, but one beat him so badly his eardrum was ruptured and threatened to cut his head off
From there he limped on to Baluchistan, in modern-day Pakistan which was then controlled by the British.
Having endured months of hardship with barely any company, he was greeted by Sir Norman Carter, the top British official in the region, who was fascinated by his tales of adventure and derring-do.
As Speck ventured around the coast of India, so the stories spread and his legend grew, turning him into something of a celebrity.
During the day he battled the seas - capsizing a total of eight times - but by night he drank in swanky officer's clubs and regaled newspaper reporters with stories from his voyage which was by then more than two years old.
But his fame soon created problems. While he would have preferred to take the calmer inland waterways, he was often forced to take more treacherous sea routes due to crowds blocking the smaller rivers.
It was in India that his fame first saw him arrested as a spy, and while he was released two days later, the allegation would continue to dog him. 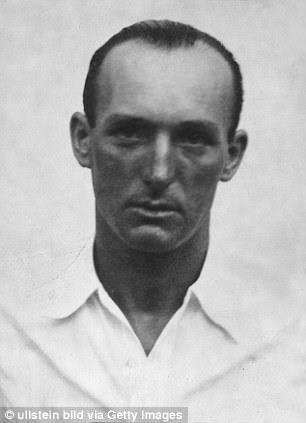 +7
By the time Speck arrived in the Torres Strait, north of the Australian mainland, war had broken out in Europe and he was arrested
There were advantages, however. Wealthy Britons offered him cash and regular payments, allowing him to plot a course to Australia.
But with Hitler now in power in Germany and nationalism on the rise, his own countrymen spurned him, accusing him of running away from his patriotic duty to restore the nation to its former glory.
That had all changed by the time he reached Jakarta, in Indonesia, where he was greeted by a local Nazi official who offered him money to continue his voyage.
Speck used some of the money to buy picture and video cameras, and was also given a Swastika flag which he flew from the front of his kayak.
Leaving Jakarta he island-hopped through the Dutch East Indies until he was stopped in his tracks by a vicious beating.
Having been welcomed by previous tribes and even venerated as a God by those who saw his cameras as a form of sorcery, Speck was unprepared when one tribe suddenly turned on him as he slept on the island of Lakor.
He was tied up, beaten for an hour with such ferocity that his eardrum was ruptured, and threatened with having his head cut off.
Speck managed to escape and sailed back to Jakarta for medical treatment, before sailing the other way around New Guinea after being denied permission by the Dutch to pass back through their waters.
The reason was a mystery to Speck, but was in fact motivated by the rapidly worsening political situation in Europe. 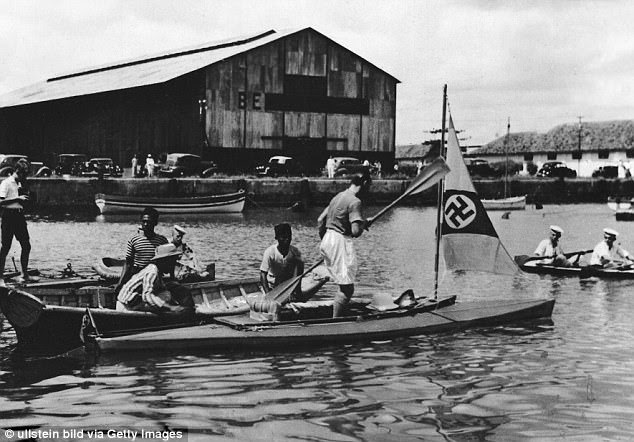 +7
While Speck flew a Nazi flag and carried camera equipment with him, the Australians concluded he wasn't a spy. However, he was still locked in a camp for the rest of the war 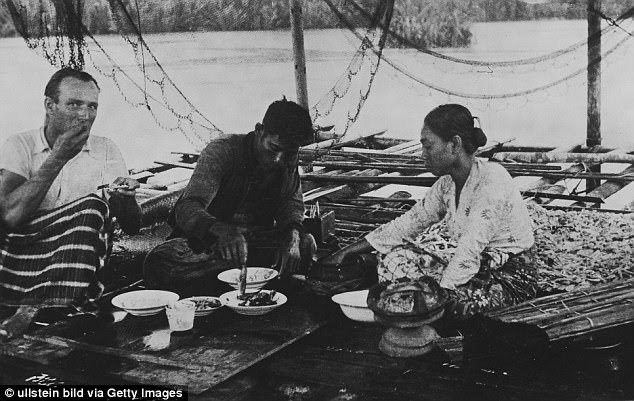 +7
Speck was eventually released in 1946 before settling north of Sydney and becoming an opal miner. He died there in 1995, aged 88
Having aimed to be in Sydney by Christmas of 1937, he spent Christmas the following Christmas in the remote town of Manokwari, which he departed in February 1939.
By July he reached the far eastern tip of New Guinea, and turned back toward his final goal of Australia.
He skirted the coast of New Guinea before crossing the Torres Strait to Daru.
Through September he hopped across the islands until eventually being stopped on Saipai, where he was arrested by three Australia police officers and brought to a detention camp.
While he was initially thought to be a Nazi spy, he was later cleared after an examination of his mail and journal found no strong political leanings.
He spent the rest of the war in camps before being freed in January 1946, eight months after the Nazis surrendered and just before he turned 39.
Speck eventually found the mine he had been seeking just to the north of Sydney, where he eventually settled, trading in opals.
He returned to Germany just once, in 1970, and died in Australia in 1995, aged 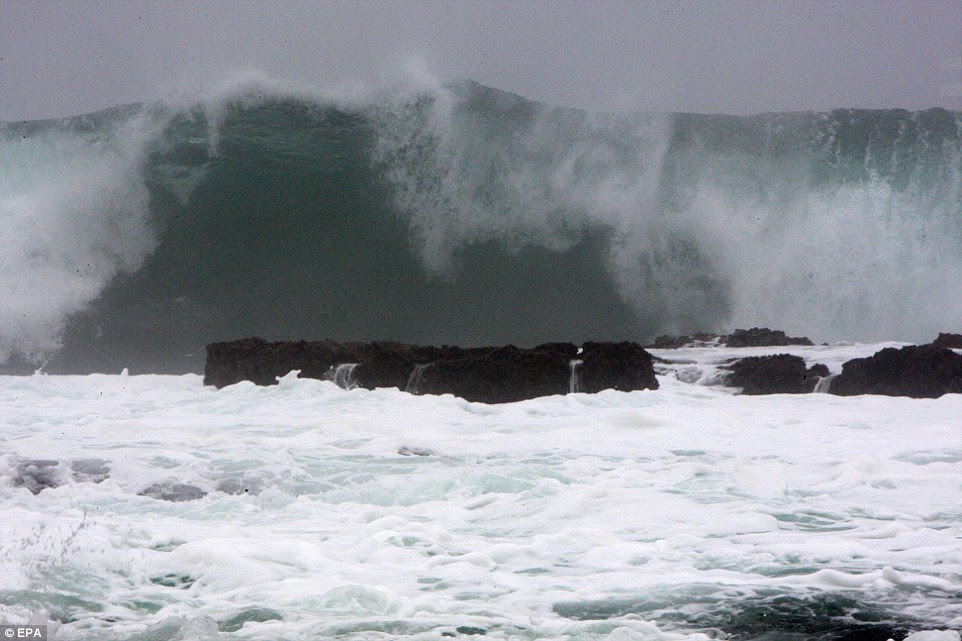 +10
Approach: Huge waves are seen battering the coast of Korea, as the storm veers round towards the southern-most island of Japan 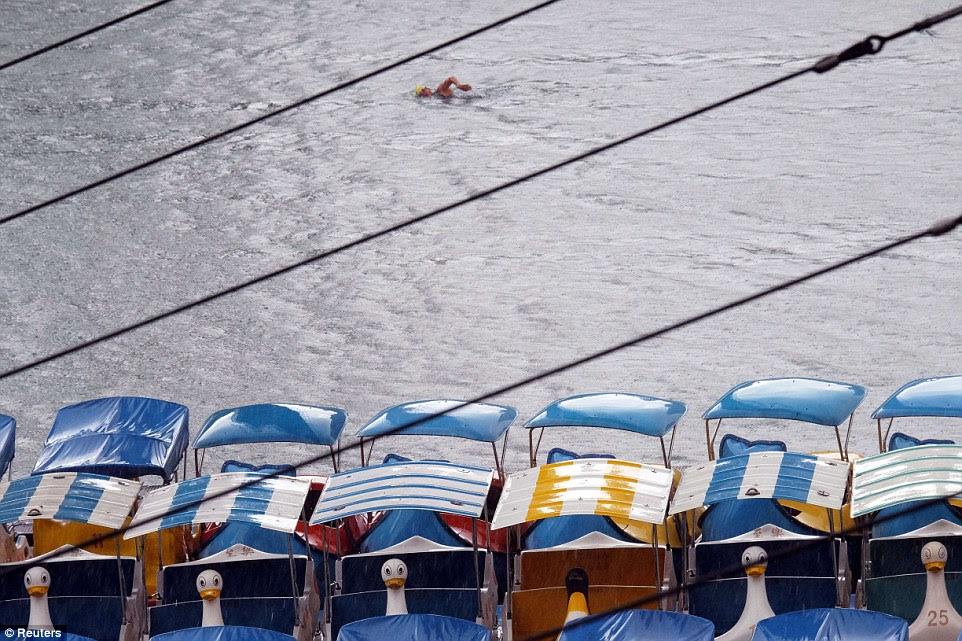 +10
Dangerous: A man can be seen taking a swim ahead of the dangerous storm. It emerged today that one man had been swept out to sea by the after being knocked off of his boat 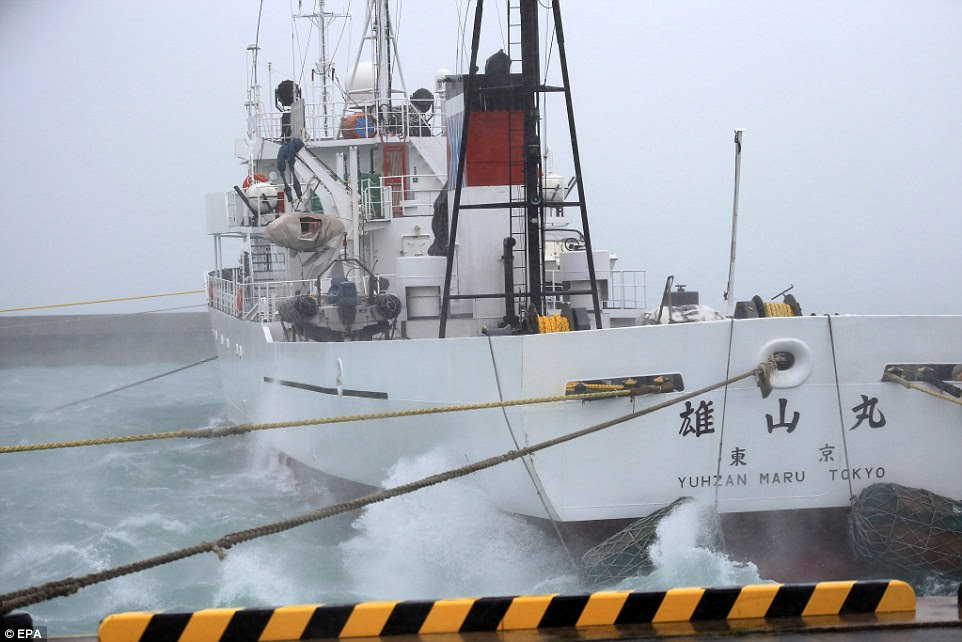 +10
Rough seas: The Yuhzan Maru, a Japanese fishing boat, is tossed by strong waves as the typhoon passes over Itoman, on the island of Okinawa
Forecasts show the storm tracking towards Kyushu island and then across Japan's main island of Honshu. It is forecast to lose more of its power over land, but much of the damage from such storms comes from downpours that cause landslides and flooding.
Such risks are elevated by the storm's timing, at the tail end of Japan's summer rainy season.
The Philippines, which suffered the strongest typhoon to ever hit land when Haiyan struck six months ago, was spared the ferocious winds of Neoguri.
The storm did not make land fall and remained about 480 kilometres (300 miles) east of the northern-most province of Batanes, when it roared past on Sunday.
The typhoon did intensify the country's south-west monsoon, dumping heavy rains on some western Philippine provinces.

Breathtaking photographs capture Mother Nature at her most ferocious, depicting the powerful churn of the ocean during a violent thunderstorm.
With a single snap of the shutter, New York photographer captures the moment sea and sky meet in an incredible splash of color.
Enlarge 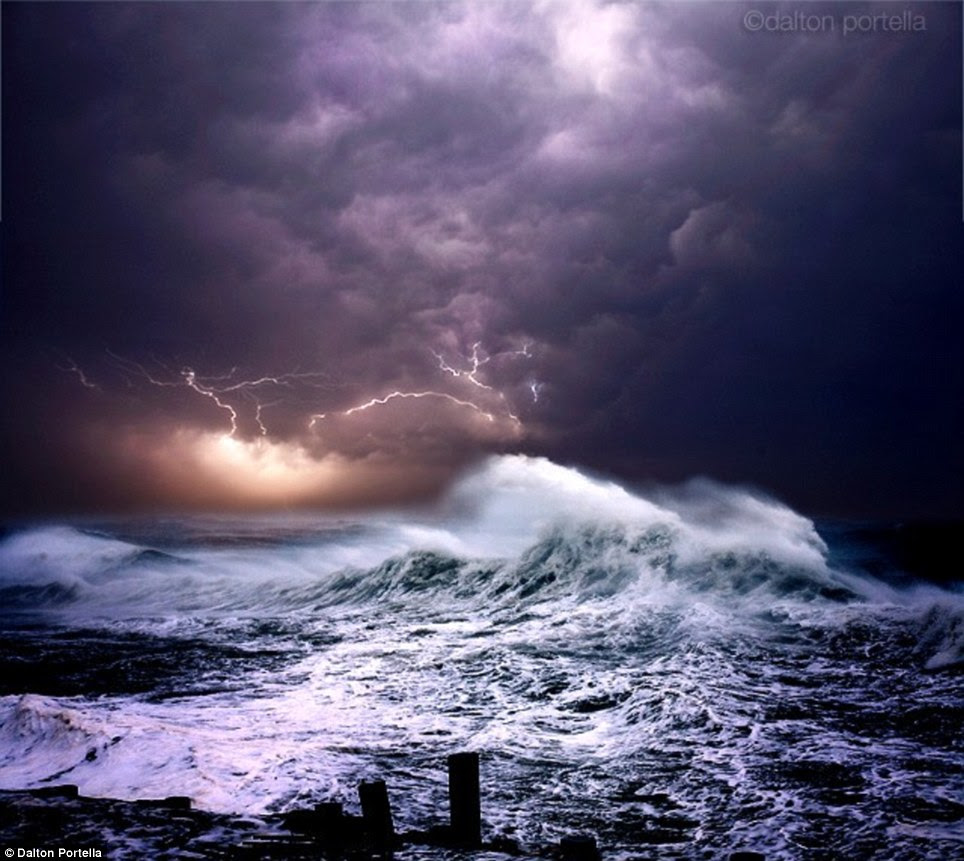 
'I portray the broad range of the human experience': Dalton Portella dramatic seascapes captures the striking power of nature as a thunderstorm churns the ocean 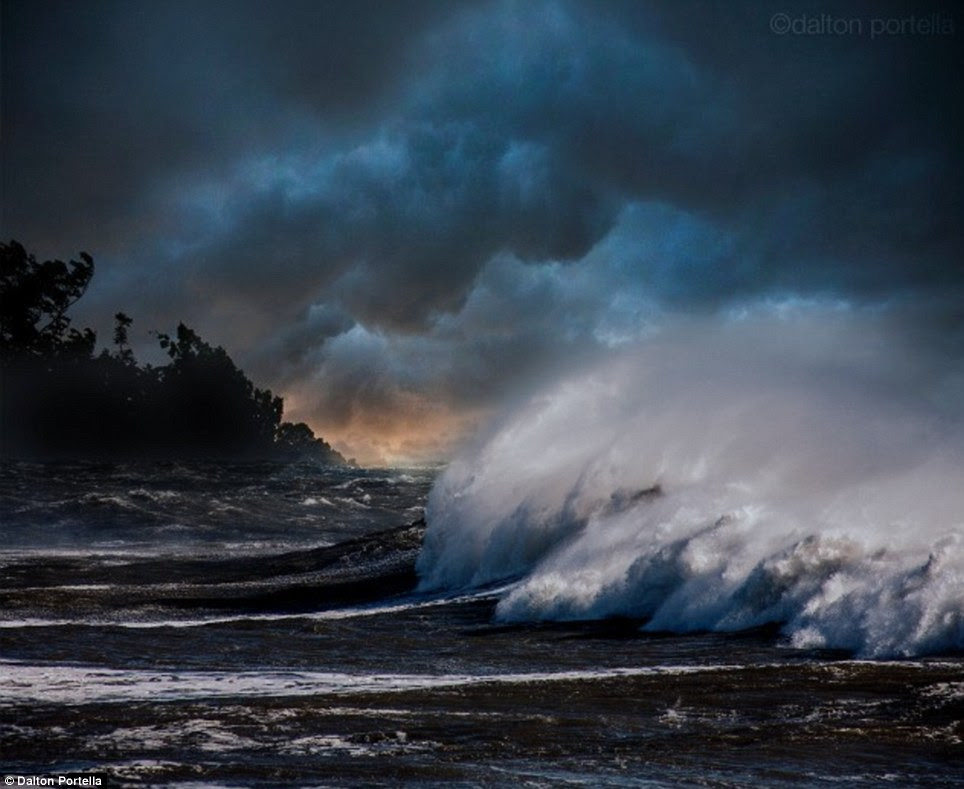 +6
Ominous: Dalton Portella's striking ocean photographs almost look like paintings, with streaks of lightning illuminating dark clouds over a thrashing ocean
Portella snapped his 'Perfect Storm Series' in Montauk, New York, during the violent storm which hit the US east coast on July 4.
The seascapes show lightning streaking through dark, ominous clouds over a thrashing ocean swell.
'With my art, I capture essence; the essence of places I've been, emotions I've felt, and the subjects I paint and photograph,' Portella said, according to My Modern Met.
'I portray the broad range of the human experience.' 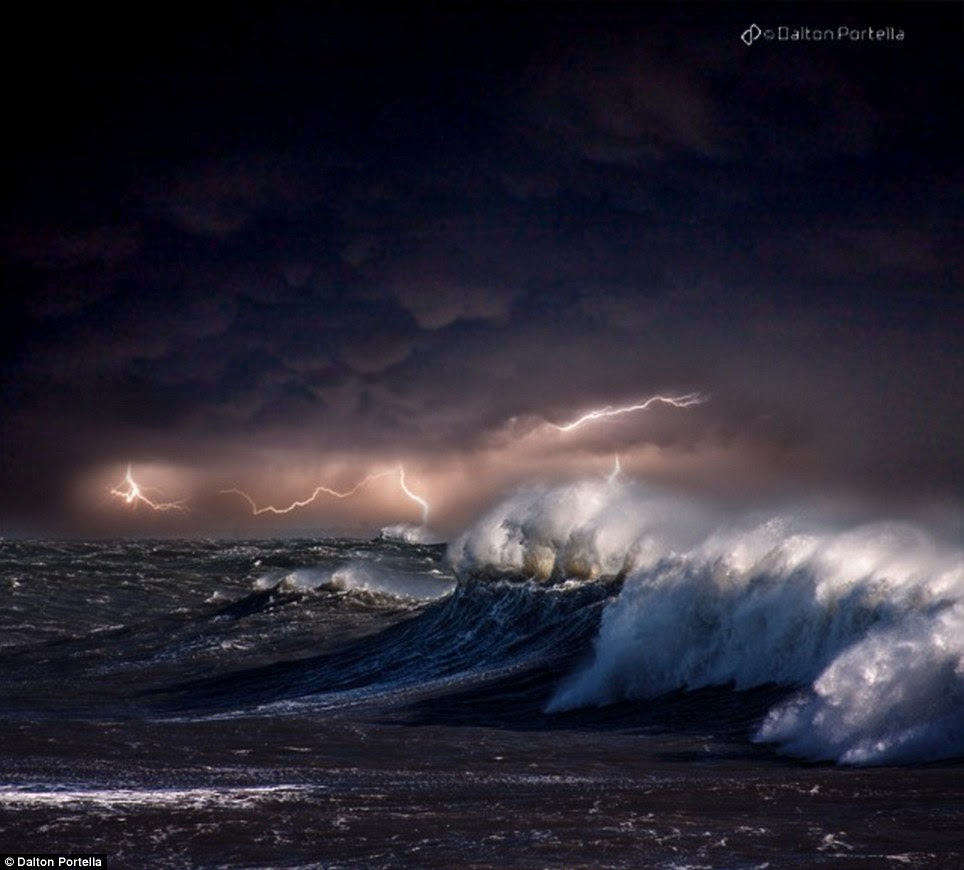 +6
'With my art, I capture essence': Photographer Dalton Portella captured the ocean frothing and churning during a violent thunderstorm 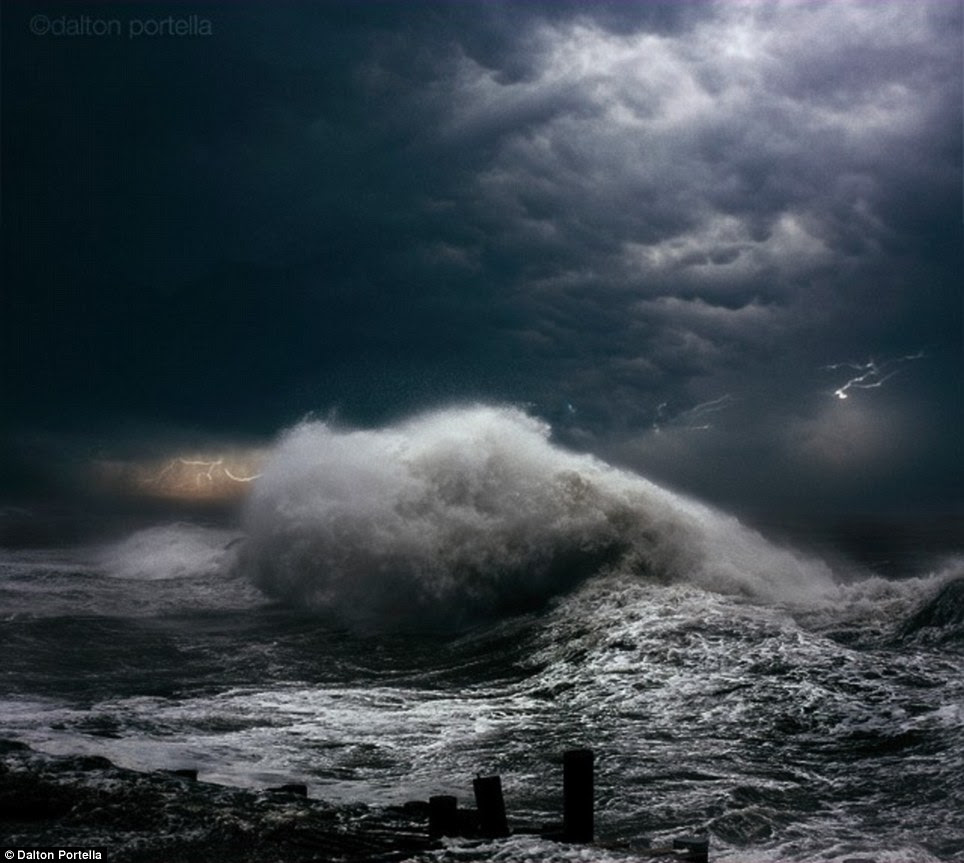 +6
Hypnotizing: Musician and photographer Dalton Portello captured the turbulent ocean in his home of Montauk, New York during a storm 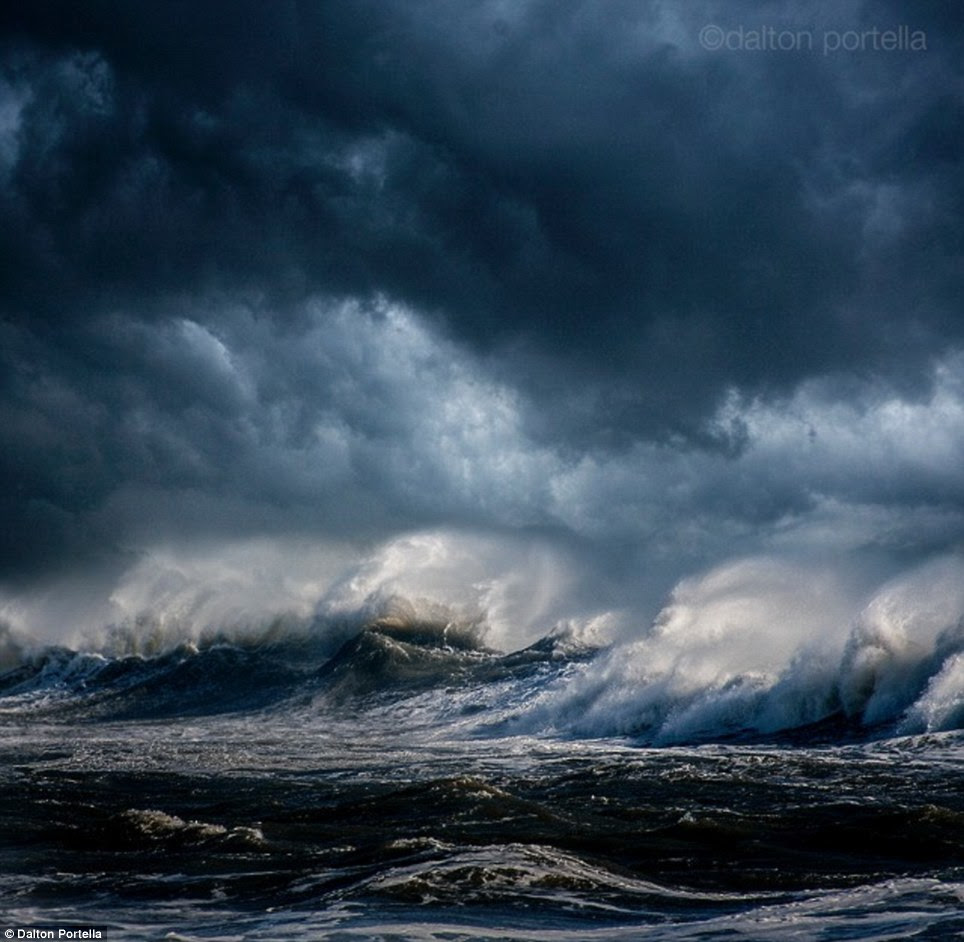 +6
Tempest: Waves crash as the ocean swells during a storm in Montauk, New York