US will spend $120 million on hypersonic missiles that can strike ANYWHERE in the world at 3,800mph in an effort to keep up with China and Russia

Hypersonic missiles that can fly at many times the speed of sound are leading to an arms race between the world's three greatest super-powers.
The weapons, currently being tested by the US, China and Russia, are designed to beat regular anti-missile defence systems and can strike anywhere in the world.
They can switch direction in flight and do not follow a predictable arc like conventional missiles.
Now, the Pentagon has applied for $120 million (£85m) in funding to develop technologies to intercept the next generation munitions. 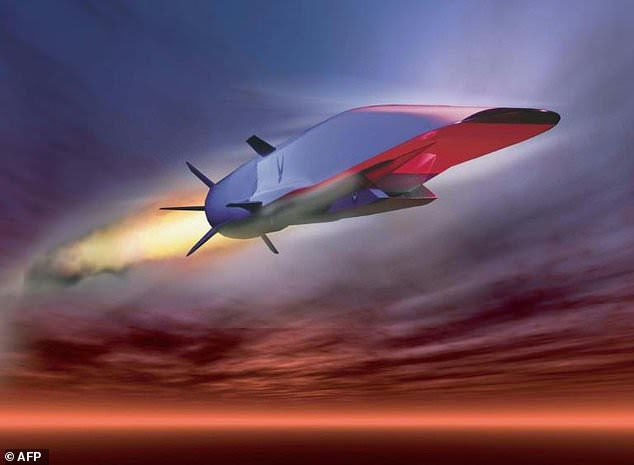 +5
Hypersonic missiles that can fly at many times the speed of sound are leading to an arms race between the world's three greatest super-powers. This artist's impression, courtesy of the US Air Force, shows the hypersonic X-51A Waverider cruise missile currently under development
The Pentagon's plans were outlined In the latest proposed US budget released by the Office Of Management And Budget In Washington, DC.
Even as the Pentagon works to ensure that its defenses keep pace with North Korea's fast-growing rocket program, US officials are increasingly turning their attention to the new missile threat.
In its proposed $9.9 billion (£7bn) requested budget for 2019, the Missile Defense Agency (MDA) is asking the additional money to develop hypersonic missile defences, a big increase from the $75 million (£53) in fiscal 2018.
'China's hypersonic weapons development outpaces ours, we're falling behind,' said Admiral Harry Harris, who heads the US military's Pacific Command.
'We need to continue to pursue that and in a most aggressive way in order to ensure that we have the capabilities to both defend against China's hypersonic weapons and to develop our own offensive hypersonic weapons,' he added.
MDA Director of Operations Gary Pennett told Pentagon reporters this week that the potential deployment by America's rivals of hypersonic weapons would create a 'significant' gap in US sensor and missile interceptor capabilities.
Boeing reveal the X-51A WaveRider: The warp speed of today

These weapons could be launched from planes, ships or submarines and carry either nuclear or conventional payloads.
'The key challenge to US national security and the security of US friends and allies is the emergence of new threats designed to defeat the existing' ballistic missile defense system,' Mr Pennett said.
According to reports, China has developed and last year tested a new type of hypersonic missile called the DF-17.
The DF-17 is a ballistic missile equipped with a hypersonic glide vehicle (HGV), which is said to be capable of achieving speeds of up to 7,680 miles per hour (12,360 kph) – or 10 times the speed of sound.
In tests conducted in November 2017, the missile’s payload flew roughly 870 miles (1,400km) in about 11 minutes with the HGV, though intelligence experts suspect it could one day achieve over 1,500 miles (2,500 km). 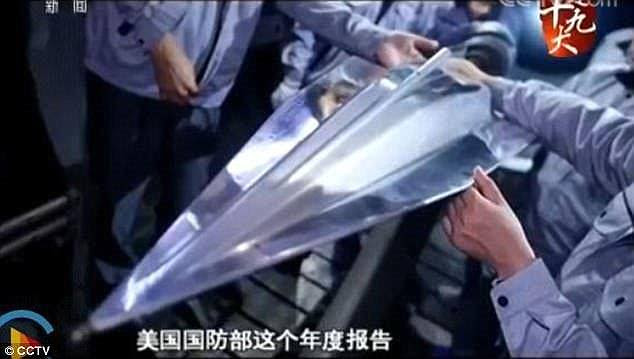 +5
According to reports, China has developed and last year tested a new type of hypersonic missile called the DF-17. Since 2013, China has conducted seven successful test flights of its hypersonic craft (model pictured in a state-TV documentary) 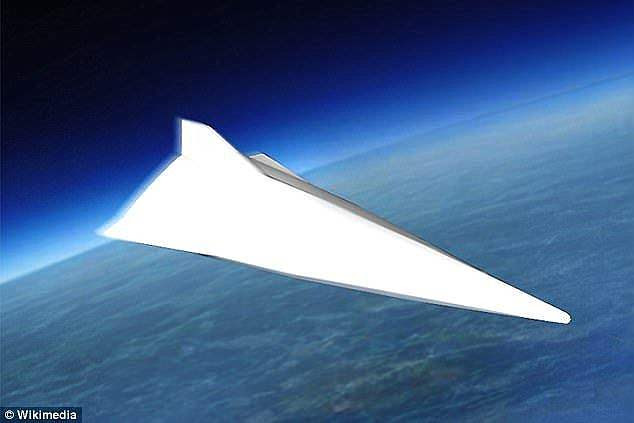 +5
Pictured is an official artist's impression of China's DF-17 hypersonic craft. Hypersonic vehicles travel so rapidly and unpredictably they could provide an almost-immediate threat to nations across the globe

WHAT ARE HYPERSONIC MISSILES AND HOW DO THEY WORK?

Aircraft and missiles are said to be hypersonic once they exceed speeds of Mach 5 and above, or five times the speed of sound.
This occurs at 1,715 metres per second (3,836mph / 6,174kmh).
The latest class of hypersonic missiles would be smaller, guided and designed to carry conventional explosives for time-sensitive, rapid response in theatre operations.
There are two kinds of approaches to solving the hypersonic challenge in missiles: 'scramjet' and 'boost glide.'
The air-breathing scramjet relies on high speed for its power.
As it accelerates, more air and fuel is pushed into the engine, allowing it to accelerate even more - to hypersonic speeds.
The boost glide model rides a reentry vehicle to extremely high altitudes, where it skips across the Earth's upper atmosphere.
Traditional ballistic missiles already travel at hypersonic speeds.
Built to carry nuclear and conventional warheads, these weapons are capable of reaching outer space in the course of their flights, but they can't manoeuvre.The US Office of the Director of National Intelligence this week stated China 'has tested a hypersonic glide vehicle.'


Russia too is believed to be developing its own hypersonic weapon called the Zircon.
The Zircon cruise missile travels between 3,800mph (6,115kph) and 4,600mph (7,400kph) - five to six times the speed of sound - and puts Russia 'half a decade' ahead of the US'.
This makes it faster than any anti-missile system, including those that are expected to appear in the next two decades.
According to Russian news agency Tass, it is to go into serial production this year.
Though the Pentagon is warning about hypersonics, the United States has been developing the technology for years.
The Air Force says its X-51A Waverider cruise missile, tested in 2012, could travel at speeds faster than Mach 6 (4,603mph / 7,408kph).
That's more than one mile a second, and future iterations are expected to go much faster. 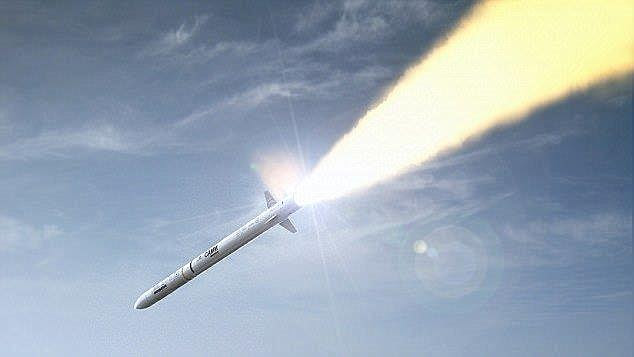 +5
Russia's Zircon missile is capable of travelling twice as fast as the Royal Navy's Sea Ceptor missile (pictured), which would be responsible for shooting it down were it to attack British troops or mainland UK 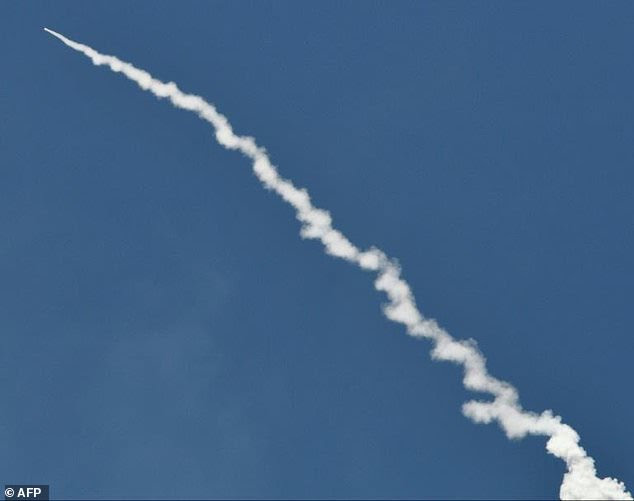 +5
It would also be more than capable of evading US defences. This image shows a ground-based interceptor missile taking off from Vandenberg Air Force base, California last year in a test against an ICBM
Part of the reason China has been able to advance its hypersonic missile programs is that it is not subject to anti-missile treaties signed between the United States and Russia.
The 1987 Intermediate Nuclear Forces Treaty banned short- and intermediate-range ground-launched missiles.
'Over 90 per cent of China's ground-based missiles would be excluded by INF if they were now in it,' Mr Harris said.
Still, by far the lion's share of the MDA's budget continues to go towards improving existing missile-defense systems.
Various sensors and radars can track an incoming missile hurtling towards a target, then blast interceptor rockets toward it to pulverize it with kinetic energy.

China may be bringing back a devastating doomsday device first dreamt up during the Cold War.
State-sponsored experiments at a Chinese research facility have raised concerns the country is building a 'salted' nuclear bomb.
The device, which one weapons expert has labelled 'highly immoral', uses a special isotope to release huge amounts of radioactive fallout. 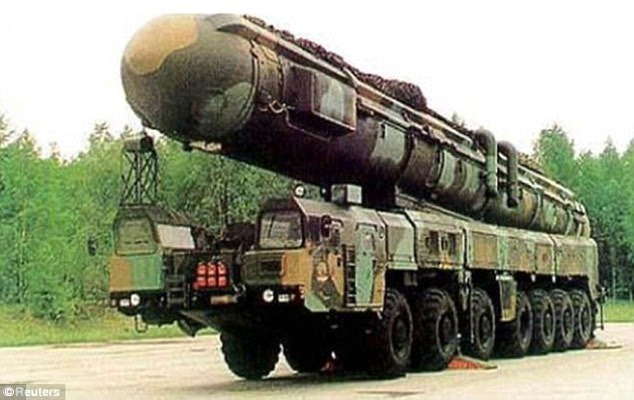 +4
China may be developing a devastating doomsday device first dreamt up during the Cold War. State-sponsored experiments at a Chinese research facility have raised concerns the country is building a 'salted' nuclear bomb. Pictured is one of China's Dongfeng-41 missiles
Experts at the Beijing-based Chinese Academy of Sciences recently announced they had successfully fired superheated beams of a radioactive isotope of tantalum.
The rare metal is one of few isotopes that can be added to warheads to create a salted bomb, with potentially devastating consequences.
The research was carried out at a facility in the city of Lanzhou by experts working with the Institute of Modern Physics.
Scientists behind the project said their work aimed to 'meet a critical strategic demand of China's national defence.'
They added it had potential military applications, but refused to give further details.
Tantalus is a rare metal used in alloys and electronics, and is named after a villain from Greek mythology. 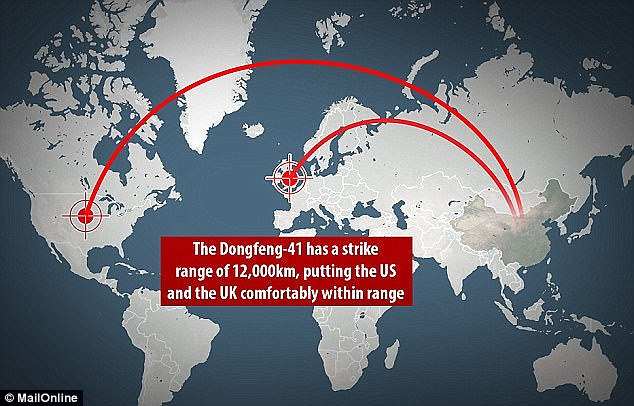 +4
If it develops a salted bomb, China could load it into one of its Dongfeng-41 missiles, a long-range device with a range of 7,500 miles (12,000km) - long enough to hit the UK and the United States - expected to enter China's arsenal later this year

WHAT ARE SALTED BOMBS?

A 'salted bomb' is a type of nuclear weapon that has been branded 'highly immoral' by some experts.
The device aims to spread deadly radioactive fallout as far as possible rather than maximise explosive force.
The result is lasting environmental damage and vast areas of land left uninhabitable for decades.
Salted bombs take their name from the phrase 'to salt the earth', meaning to render soil unable to host life.
They are able to contaminate a much larger area than a traditional 'dirty' atomic bomb, like those used on Hiroshima and Nagasaki in 1945.
To increase the radioactive destruction of salted bombs, certain radioactive isotopes are added to the device.
Heavy metals like gold, cobalt or tantalum can be used.
Incorporating these metals into an atomic bomb would send high-energy neutrons at the stable element and turn it into a highly radioactive version.
The radioactive isotope would then contaminate huge swathes of land.
A salted bomb is believed to be of lesser energy than other bombs due to these changes but could cause more long-term damage.
The idea of a salted bomb was first proposed by Hungarian-American physicist Leo Szilard during the Cold War.
Along with Albert Einstein, the scientist was instrumental in the beginning of the Manhattan Project.
No intentionally salted bomb has ever been atmospherically tested but the UK tested a 1 kiloton bomb incorporating a small amount of cobalt as an experimental radiochemical tracer in 1957.It is part of a group of heavy metals that, if added to a nuclear warhead, could theoretically boost the release of radioactive fallout.


So-called 'salted bombs' aim to spread deadly fallout from a weapon as far as possible rather than maximise explosive force.
The weapons aim to cause lasting environmental damage and render vast areas uninhabitable for decades. 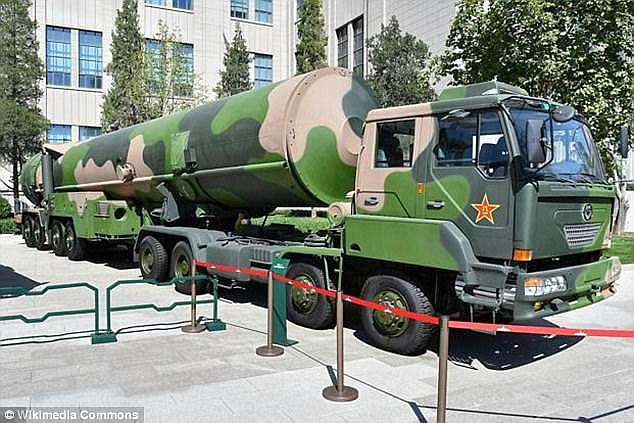 +4
The device, which nuclear weapons experts say is 'highly immoral', uses a special isotope to release huge amounts of fallout. China recently announced successful tests with tantalum, one of few isotopes that could be used in a salt bomb. Pictured is a Dongfeng-41 missile
They take their name from the phrase 'to salt the earth', meaning to render soil unable to host life.
The idea was first proposed during the Cold War by Leo Szilard, a Hungarian-American physicist who was instrumental in the building of the first nuclear bomb.
No salted bomb has ever been tested, and according to public records none have ever been built.
But some believe the new Chinese Tantalus research could be applied in the creation of one of the devices.
If it develops a salted bomb, China could load it into one of its Dongfeng-41 missiles, a long-range device with a range of 7,500 miles (12,000km) - long enough to hit the UK and the United States - expected to enter China's arsenal later this year. 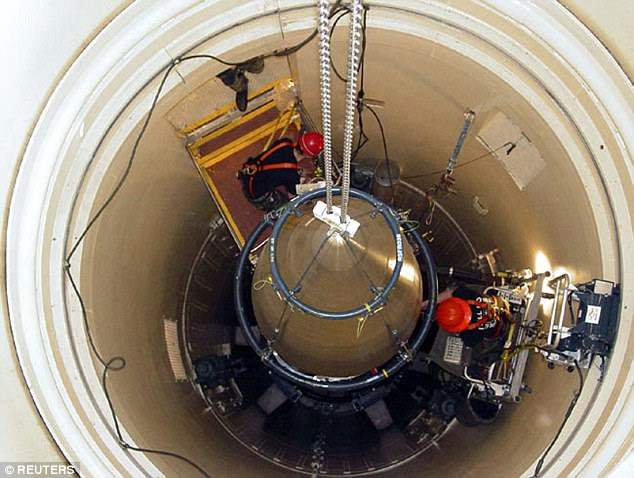 +4
No salted bomb has ever been tested, and according to public records none have ever been built. It takes its name from the phrase 'to salt the earth', meaning to render soil unable to host life. Pictured are US engineers working on a nuclear warhead within an ICBM in 2014
The superheated beam could also help China's military to test the durability of its equipment in extreme events by firing it directly at prototypes.
It is highly unlikely the research will lead to a salted bomb, but experts told the South China Morning Post the experiment could have military applications.
Dr Cai Minghui, a researcher at Beijing National Space Science Centre, said: 'In theory, the particle beam of a heavy element such as tantalum can be used as a directed energy weapon.'
Professor Han Dejun, a nuclear scientist at Beijing Normal University, said of the tantalum accelerator experiment: 'The most likely application that I can think of is in nuclear research.
'By generating a powerful beam of tantalum ions we can observe how the metal interacts with other elements and change form in high-speed collisions.
'It simulates what will happen in a real nuclear reaction.'
A third expert from China's Arms Control and Disarmament Association said the likelihood China is stockpiling salted bombs is 'very low'.
'These are highly immoral weapons,' he said.