Russian ships set sail from Syrian HQ ahead of US airstrikes: Satellite images show 11 vessels have deserted Tartus port - but are they fleeing or preparing to shoot down missiles?

Satellite pictures have emerged showing how Russian warships appear to have deserted a key naval base in Syria amid fears over possible US airstrikes.
Overhead Images show how at least 11 navy vessels, including the frigate Admiral Grigorovich, appear to have left the Tartus military port on the Syrian coast.
A picture, said to have been taken on Wednesday, shows how only a kilo-class submarine remains in the port, which is understood to be protected by Moscow's fearsome S-300 and S-400 missile defence systems.
It comes after Donald Trump told Russia to 'get ready' for missile strikes in Syria with the Kremlin having threatened to shoot down any rockets - and anything that launched them. Trump and his Western allies are considering action after a horrifying chemical attack on a Syrian rebel-held town killed at least 40.
The exact reason for the ships' movements is not yet clear, but some have speculated that the vessels are simply on a training exercise or that they may have been deployed in readiness to intercept missiles. 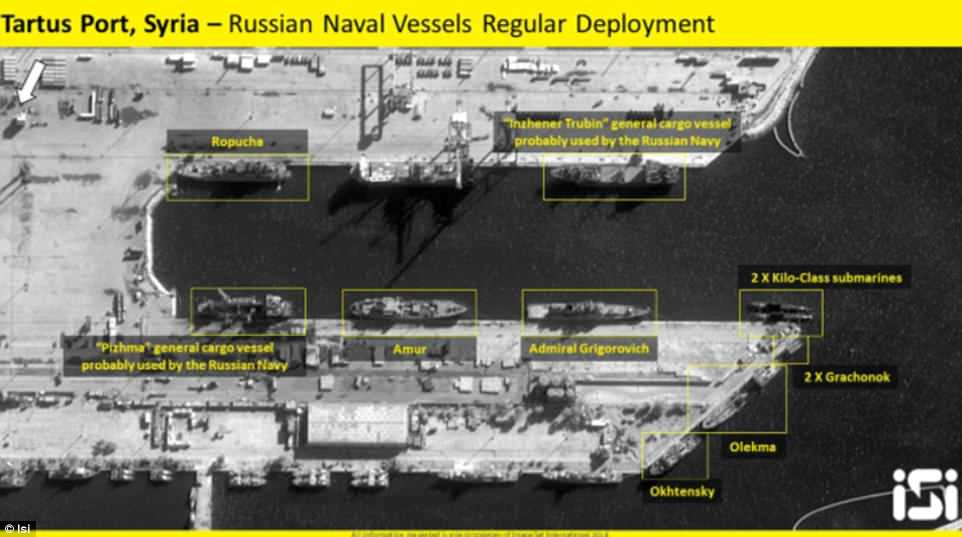 +7
Satellite pictures have emerged showing how Russian warships appear to have deserted one of its key naval bases in Syria amid fears of a US airstrike. This image shows some of the vessels recently seen at the base 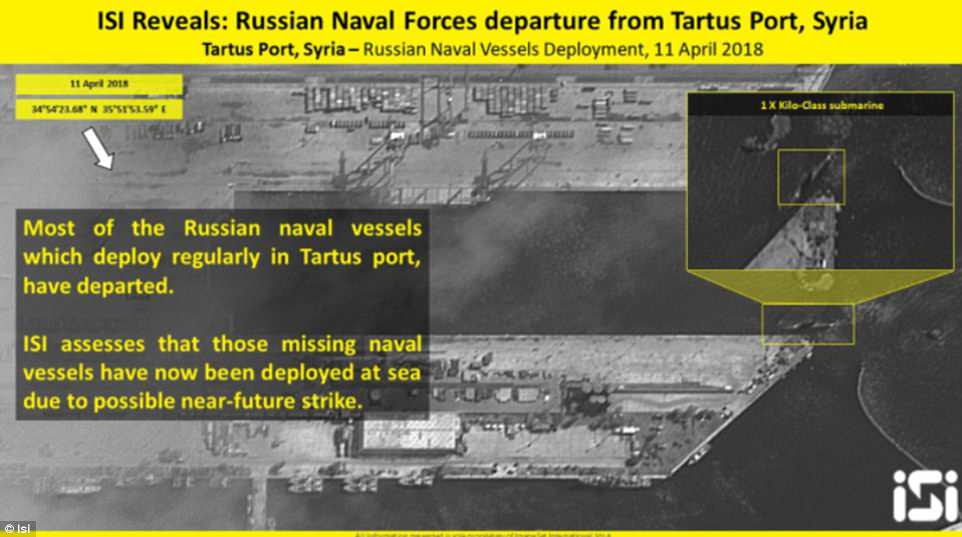 +7
Overhead Images show how at least 11 navy vessels, including the frigate Admiral Grigorovich, have left the Tartus military base on the Syrian coast. This picture, apparently taken on Wednesday, shows how only a kilo-class submarine remains in the port, which is understood to be protected by Moscow's fearsome S-300 and S-400 missile defence systems
It is not clear when the first of the images - produced by satellite imaging and intelligence firm ISI - was captured, but it is thought to have been taken before the poison gas attack on rebel-held Douma on Saturday.
Moscow was in direct contact with the US joint chiefs of staff about the situation in Syria, Vladimir Shamanov, head of the lower house of parliament's defence committee, said last night.
Yevgeny Serebrennikov, the first deputy chairman of the Russian upper house's defence committee, told Russian media that the Kremlin's troops in Syria were being protected.
He said: 'The Russian military bases in Hmeymim and Tartus are under firm protection.
'At the same time, we expect that in the event of US strikes, if any, the lives of our servicemen will not be in danger.
Video playing bottom right...
ExpandClose

Cost: $400m per launcher group (Eight launchers, 112 missiles, and a command unit)
Missile Range: 248 miles
Missile Speed: 11,000mph
Simultaneously tracking: 80 targets'I think that the United States understands this and will not allow it, because otherwise, Russia's response will be immediate.'
As the threat of Western military action against the Syrian regime looms, Russia has already deployed thousands of troops in the war-torn country to back President Bashar al-Assad.
President Vladimir Putin first launched a military intervention in Syria in 2015, turning the tables in the multi-front civil war in favour of ally Assad.
The regime and its Iranian and Russian allies increasingly appear to be on the path to victory in Syria's brutal seven-year civil war, while the West has been reluctant to engage militarily.
The precise number of Russian troops fighting in Syria is not known. Putin said in December that some 48,000 Russian servicemen have taken part in the campaign.
He has ruled out dispatching ground troops in Syria, making the air force the mainstay of Moscow's Syria campaign. +7
Officials have acknowledged the presence of Russian advisors and military police in Syria, however.
Independent Russian military expert Pavel Felgenhauer estimated late last year that 'up to a thousand' military police and special forces are fighting alongside regime troops.
In March, the defence ministry said a total of 2,954 Russian troops in Syria had voted in presidential polls, giving an idea of current numbers.
In December Putin made a surprise visit to Russia's Hmeimim airbase in Latakia, Syria where he ordered a partial pullout of the country's troops, saying their task had been largely completed.
Russia said the airbase, set up in 2015, would remain in operation permanently, while its naval facility in the Syrian port of Tartus would be expanded.
Three battalions of military police and officers of the Russian Centre for Reconciliation would remain in Syria, Defence Minister Sergei Shoigu said.
Putin first said in March 2016 that the country's military campaign in Syria was coming to an end. Today few believe Russia is leaving the war-torn country any time soon. 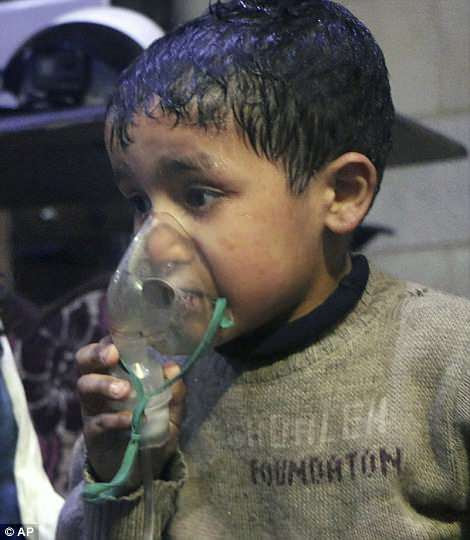 +7
The U.S. has maintained its threat of rocket attacks in response to Syrian dictator Bashar al-Assad's sickening chemical attack on the rebel-held town of Douma on Saturday
Officials and observers also point out the presence of a 'shadow army' of Russian mercenaries in Syria, including those working for a private military company called Wagner.
Military expert Felgenhauer last year estimated the number of mercenaries at 2,000 to 3,000.
Moscow in March acknowledged five Russian nationals were killed and 'dozens' wounded in US strikes on an area where no official troops were present, saying they all were in Syria 'on their own initiative.'
Various media reports in Russia and the United States said Wagner was being funded by one of Putin's allies Yevgeny Prigozhin, a Saint Petersburg businessman who previously carried out catering contracts for Russia's military and the Kremlin.
He has been charged by a US court and hit by Washington sanctions over setting up an internet 'troll factory' that is accused of attempting to influence the 2016 presidential election in favour of Donald Trump. He has denied involvement.
Russia has officially acknowledged 84 military losses in the Syrian war, including 39 killed in a plane crash at Hmeimim in March that was not caused by military action.
Russia rules the skies in Syria and the role of its air force there has been celebrated at home.
Russian warships and submarines have also played a prominent role backing up the bombing campaign in Syria, firing missiles at Islamic State group targets from the Mediterranean.
The Hmeimim airbase on the western coast and the naval facility in Tartus have been protected by S-300 and S-400 air missile defence systems.
Russian ships, such as Moscow's only aircraft carrier, the Admiral Kuznetsov, have also completed missions in Syria. The Kuznetsov is now out of action for repairs set to last 2 to 3 years.
Russian ships are passing back and forth through the Bosphorus every couple of days.
The Russian defence ministry has previously said it will fire at any US craft that strikes government areas of Damascus, where Russian officials are also bas
Posted by ASC at 10:12 PM