Defence giant BAE systems has landed a £20billion project to build nine warships for Australia in a major boost for Brexit Britain.
The firm beat off fierce competition to get the contract to construct the 'hunter killer' anti submarine ships.
The new fleet will become the backbone of Australia's defence and is the biggest naval construction project the country has undertaken since World War Two.
Theresa May hailed today's news saying it is the 'perfect illustration' of the deals Brexit Britain will be striking.
She said: 'The sheer scale and nature of this contract puts the UK at the very forefront of maritime design and engineering and demonstrates what can be achieved by UK industry and Government working hand-in-hand.
'We have always been clear that as we leave the EU we have an opportunity to build on our close relationships with allies like Australia. This deal is a perfect illustration that the Government is doing exactly that.
'And while this is an enormous boost for the UK economy, it will also cement our strategic partnership with one of our oldest and closest friends for decades to come.' 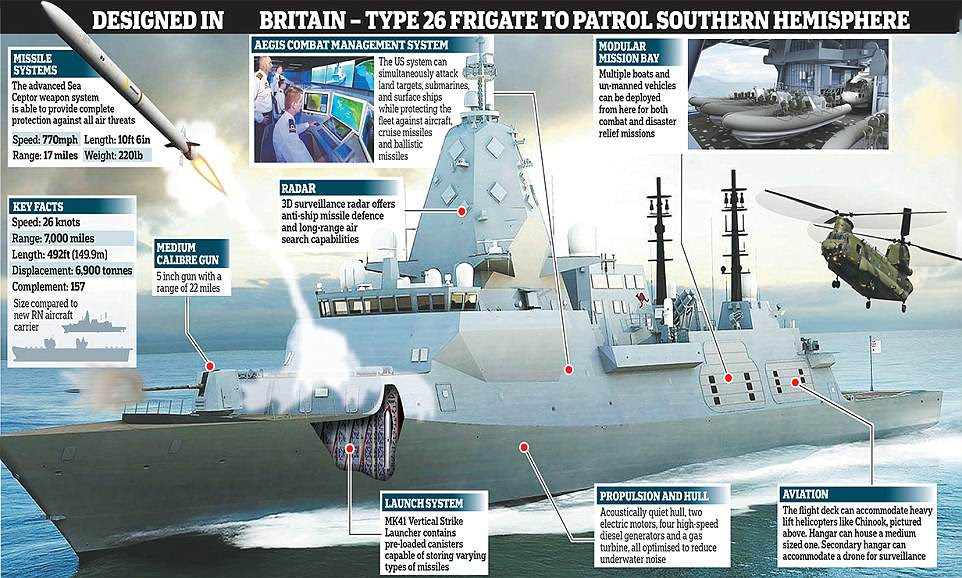 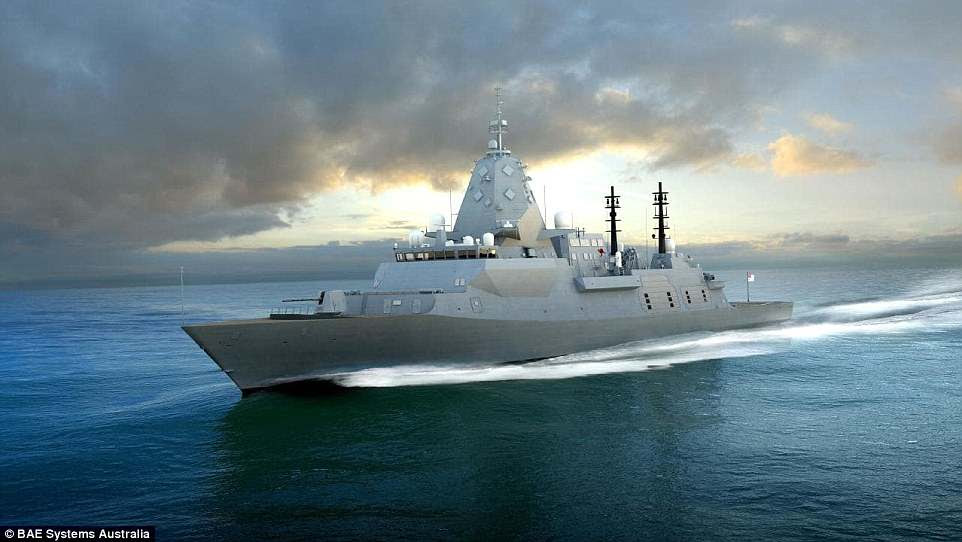 +4
Defence giant BAE systems has landed a £20billion project to build nine warships (an artist's impression of one is pictured)  for Australia in a major boost for Brexit Britain. 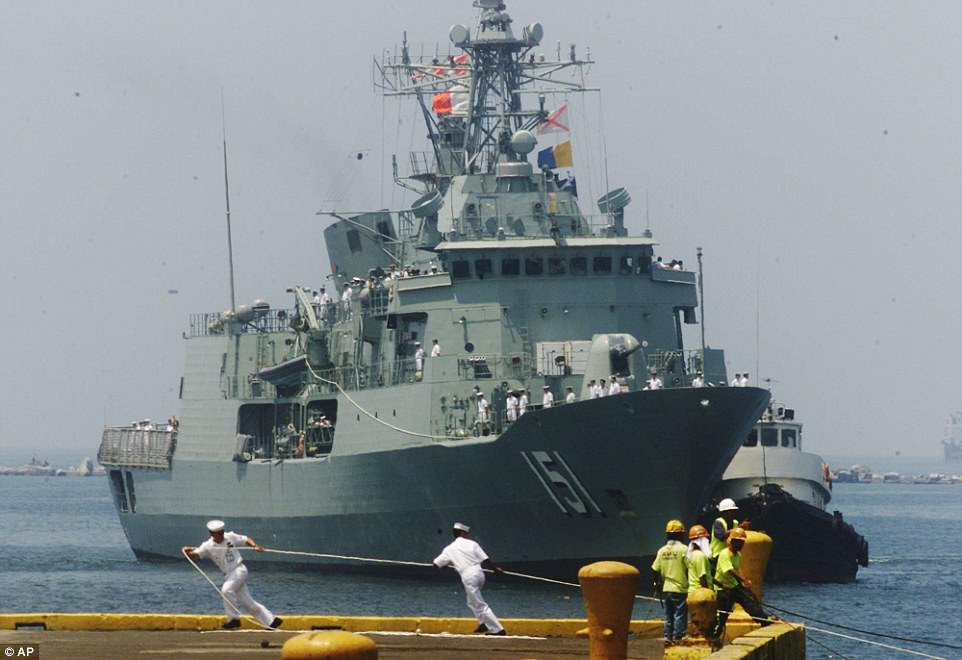 +4
The 'hunter killer' warships will replace the ageing Anzac-class frigates (pictured) which have been in circulation since 1996
PM: The Tories back business and will continue to back business
Loaded: 0%
Progress: 0%
0:00
Previous
Play
Skip
Unmute
Current Time
0:00
/
Duration Time
1:47
Fullscreen
Need Text
SHARE THIS
MORE VIDEOS

Alun Cairns: Airbus is preparing 'in case' of no-de…

2012: PM says there will be no negotiations over Falkla…

Polls have closed and counting begins in Lewisha…

The deal will create thousands of jobs in Australia and is a major boost to the defence industry in the UK.
The Hunter Class frigates will replace the country's eight aging Anzac-class frigates that began service in 1996.
Construction on the ships will kick off in 2020 and the first ship is expected to be delivered in 2027, according to a report in The Australian newspaper.
A Defence source said the BAE-designed ships will be the most capable vessel of its kind, telling the newspaper: 'They kill submarines.'
Australia is understood to have gone with the British bid in part because the two countries already have a close security partnership. International Trade Secretary Liam Fox said: 'The UK and Australia already enjoy a strong trading relationship worth more than £13 billion a year.
'Today's announcement is a further boost to this relationship which will create significant opportunities for companies in both countries to deepen their trading ties.
'As an international economic department, we are excited for the opportunities this will bring to both our nations including increased data and information sharing, high-end technology transfer, and collaboration at the cutting-edge of maritime expertise.'
Defence Minister Guto Bebb said: 'BAE Systems' winning bid highlights the best of British shipbuilding design and our world-leading anti-submarine warfare technology.
'Australian forces have stood should-to-shoulder with our military for generations and this deal will build on our strength as allies as our two great Navies operate this cutting-edge frigate around the globe.'
The close allies are both part of the 'Five Eyes' security partnership - an intelligence sharing alliance between Britain, Australia, America, Canada and New Zealand.
Australian Prime Minister Malcolm Turnbull said: 'The frigates, to be designed by BAE Systems and built by ASC Shipbuilding, are central to our plan to secure our nation, our naval shipbuilding sovereignty and create Australian jobs. 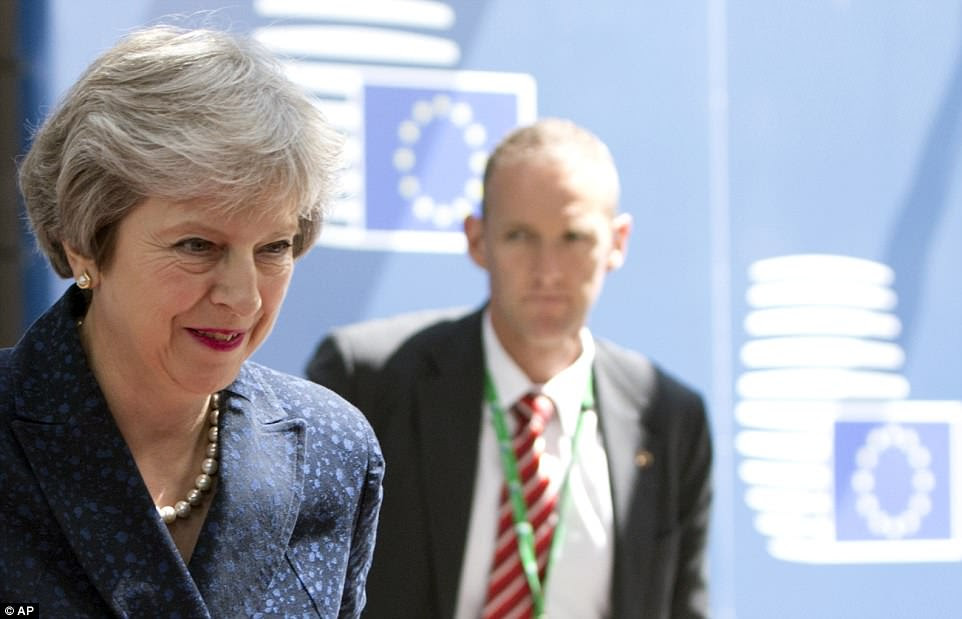 +4
The contract is a major boost for Brexit Britain and will be welcomed by Theresa May (pictured in Brussels for an EU summit today) who has insisted the UK will continue to be a leading global economy after it quits the Brussels bloc
'(It) will provide our nation with one of the most advanced anti-submarine warships in the world — a maritime combat capability that will underpin our security for decades to come.
'The Hunter class will provide the Australian Defence Force with the highest levels of lethality and deterrence our major surface combatants need in periods of global uncertainty.
'The Hunter class will have the capability to conduct a variety of missions ­independently, or as part of a task group, with sufficient range and endurance to operate effectively throughout the region.
'The frigates will also have the flexibility to support non-warfare roles such as humanitarian assistance and disaster relief.'
The deal is expected to create 4,000 Australian jobs and deliver the most technologically advanced stealth-capable submarine killer in the world.
The frigates will be be crucial to Australia's defences at a time where China is escalating its military presence in the region's oceans.
BAE Systems won the contract ahead of competing bids by Italian firm Fincantieri and Spain's Navantia.
Defence chiefs in Australia are understood to have gone with the British firm because their ship was 'by far and away' the most lethal ship of the three. bids, the paper reported.
Posted by ASC at 7:37 AM