Homeschooling, farming and creating their own electricity: Meet the couple living their off-the-grid dream in rural Tennessee whose three sons have never seen a large supermarket

A family of five are living the off-the-grid dream thanks to their self-sufficient homestead lifestyle which means they no longer have an electricity bill and eat what they produce on their farm all while home-schooling their three children.
Amy Rae and her part time physician's assistant husband, Caleb, both 40, from Coalmont, Tennessee, bought their 90-acres of land back in 2007 and two years later built a small home on it for them to live in before starting a family a few years later.
Now the couple have three sons who they home-school, Liam eight, Malachi, five, and Ewan, two, and a whole host of animals that they raise for food.
They own 30 highland cattle, 15 alpacas, 30 goats, 10 sheep ewes, 40 ducks, other poultry and two beehives.
The family's rural life means that they rely on themselves and not large supermarkets for food.
With the nearest sizable town being over an hour away, their boys have never seen a Walmart supermarket before. 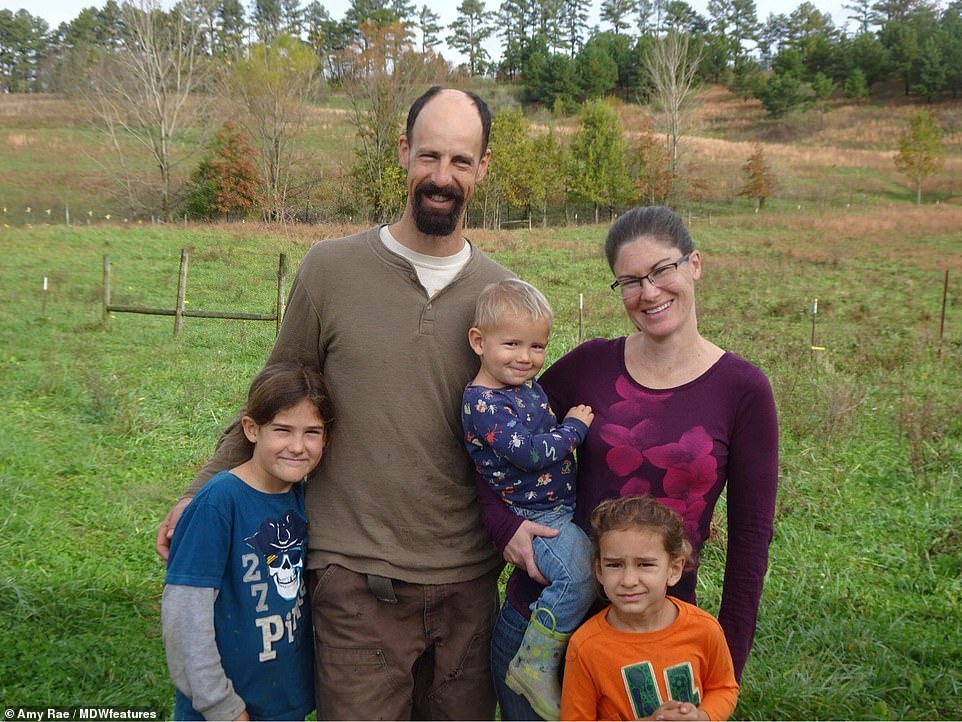 +16
This family portrait shows Liam, left, next to his dad, Caleb, and his mom, Amy, who is holding Ewan with Malachi in front of her 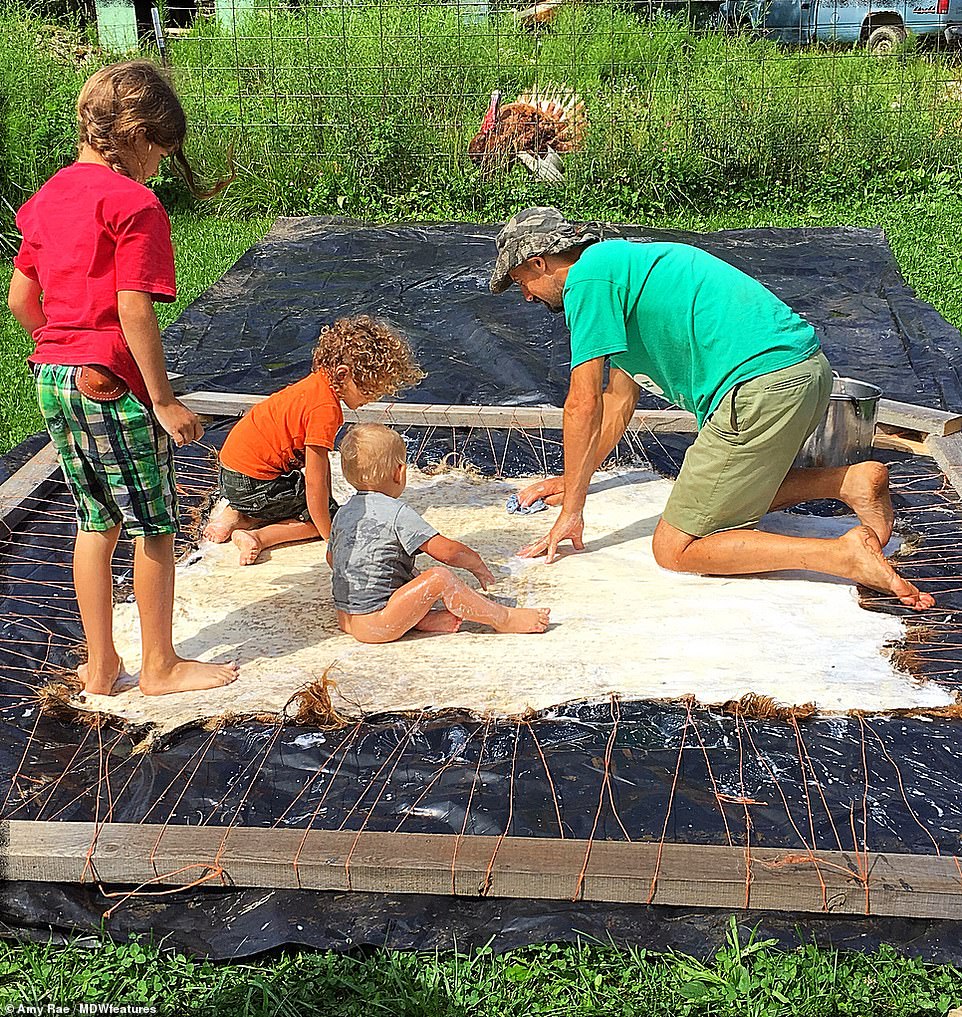 +16
The couple, from Coalmont, Tennessee, bought their 90-acres of land in 2007. Two years later, they built a small home on it for them to live in before starting a family 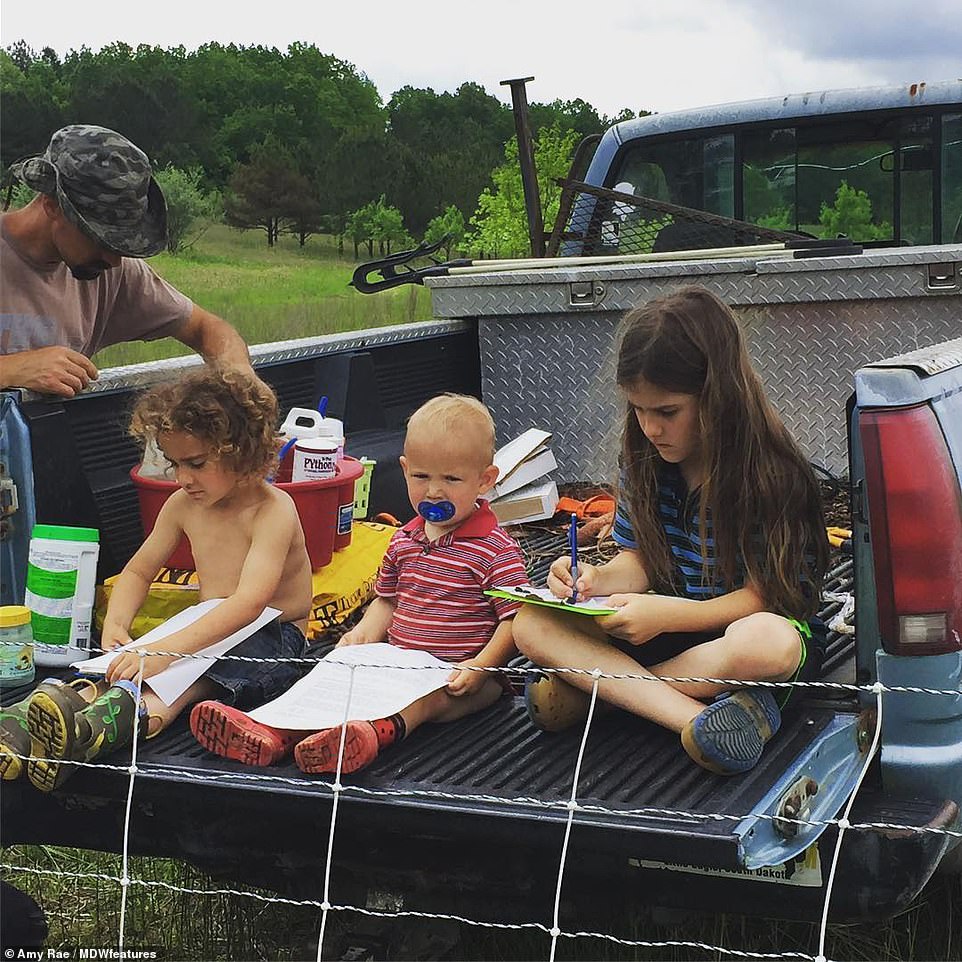 +16
Malachi, left, Ewan, middle, and Liam, are pictured sitting on the back of their tractor 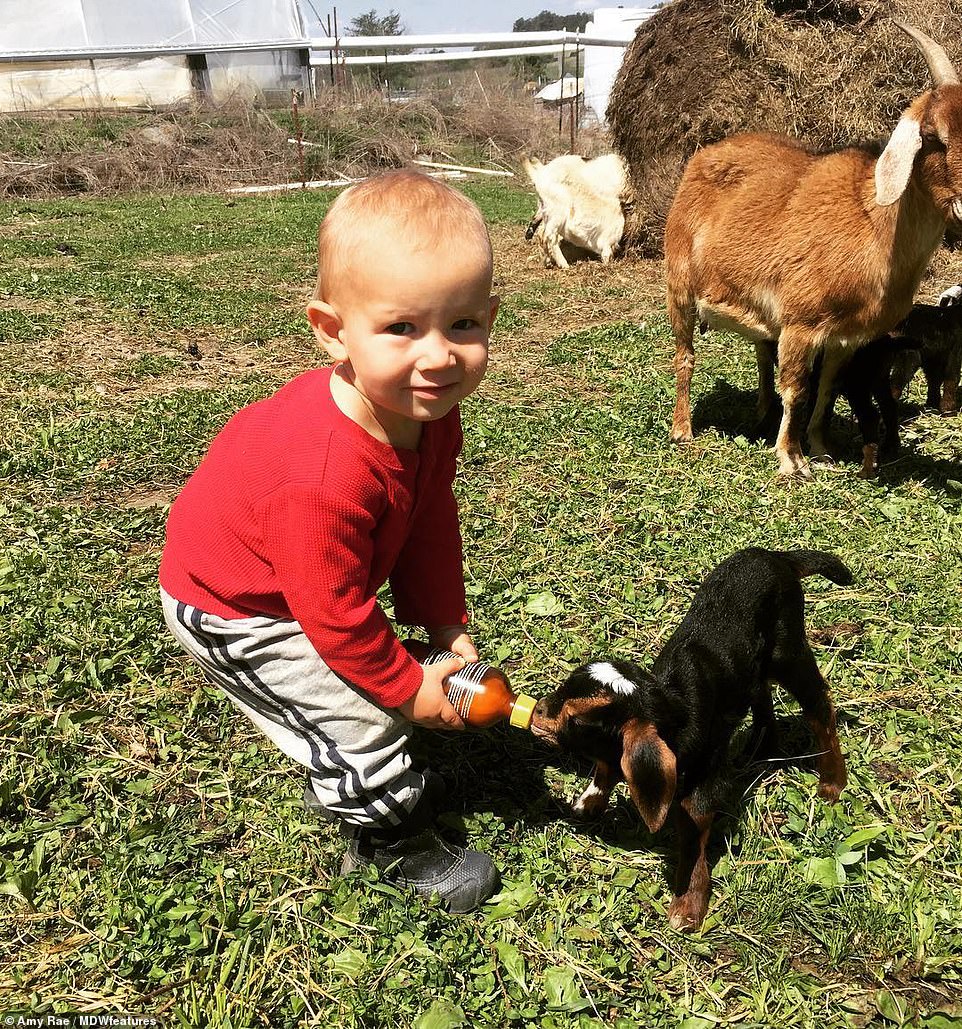 +16
Ewan is seen playing with a baby goat on the family's farm
They don't have an electricity bill as they get their power from solar panels with a gas generator for backup, collect rainwater in a 22,000-gallon tank with a well for backup, a propane tank for cooking with and a woodstove to provide them with heat. The family have mobile phones but do not have a landline.
This way of life has plenty of idyllic benefits, but Amy explained how everything they eat needs to be planned, sometimes months in advance.
'I currently spend most of my time making soap and balms, spinning alpaca yarn and knitting, cooking and preserving homegrown food, a myriad of household and farm chores, and most importantly, home-schooling and raising three boys,' she said.
'Caleb works as a physician's assistant one to two days a week, and otherwise is here on the farm, helping with the boys, managing the livestock and gardens, continuing to build the farm and house, and an endless list of miscellaneous chores.
'We have both always been very independent, interested in doing things for ourselves, by ourselves, and in ways that minimise our use of resources. Raising our own meat, vegetables, wool, and children just seemed like what we were 'supposed' to be doing.
'It's a lot of work. A lot of work. More than most people even imagine, and it's constant. We rarely take vacations, and even more rarely as a whole family because someone always has to stay and care for the farm.
'Being rural, it's hard to find simple things like a good babysitter or Indian restaurant or movie theatre, and everything is at least an hour's drive.
'Being self-sufficient, even partially, means much greater responsibility for providing for ourselves than many people have - if I want sauerkraut, then ideally I should start with growing cabbage, before I even make my own kraut!
'If we really like eating chicken, then we need to plan to raise enough chicken during the summer to last us a year and then process them and have the freezer space ready. It takes a lot of planning and personal responsibility to maintain this lifestyle. 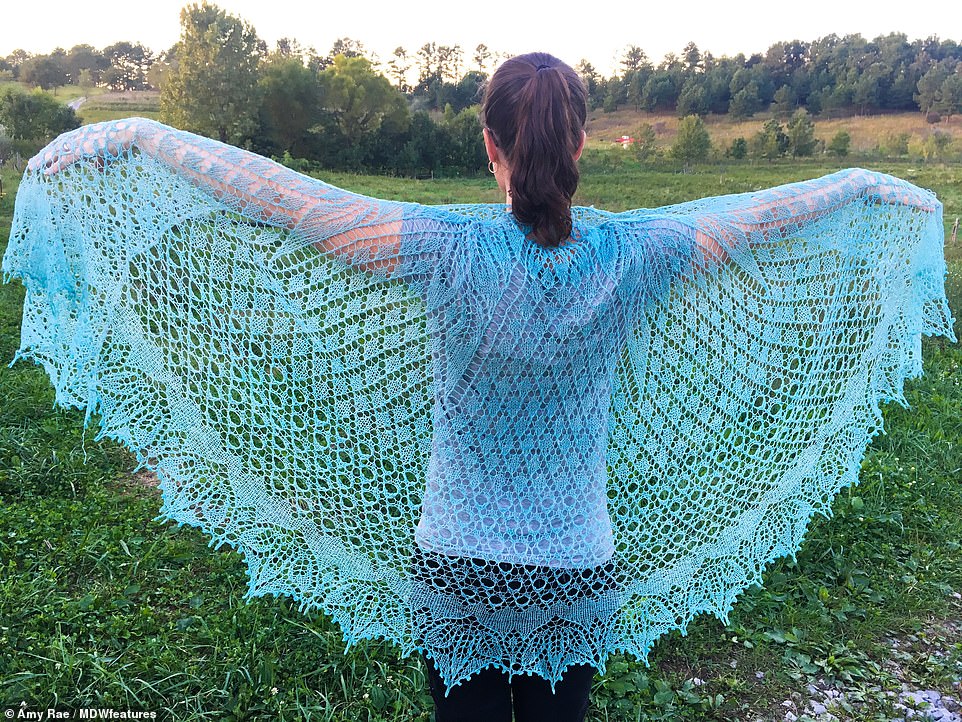 +16
Amy, who makes and sells goods, is seen sporting one of her hand spun handknit butterfly shawls 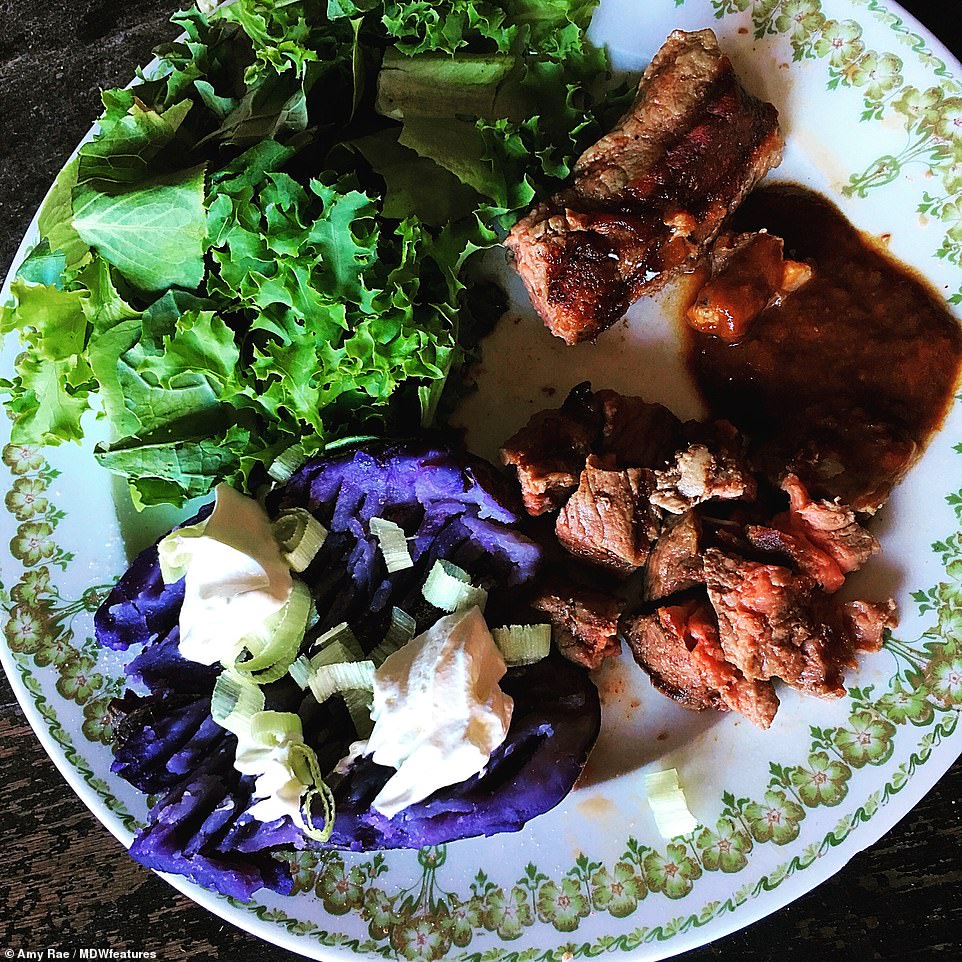 +16
A photo shows a family meal, which has been entirely homegrown 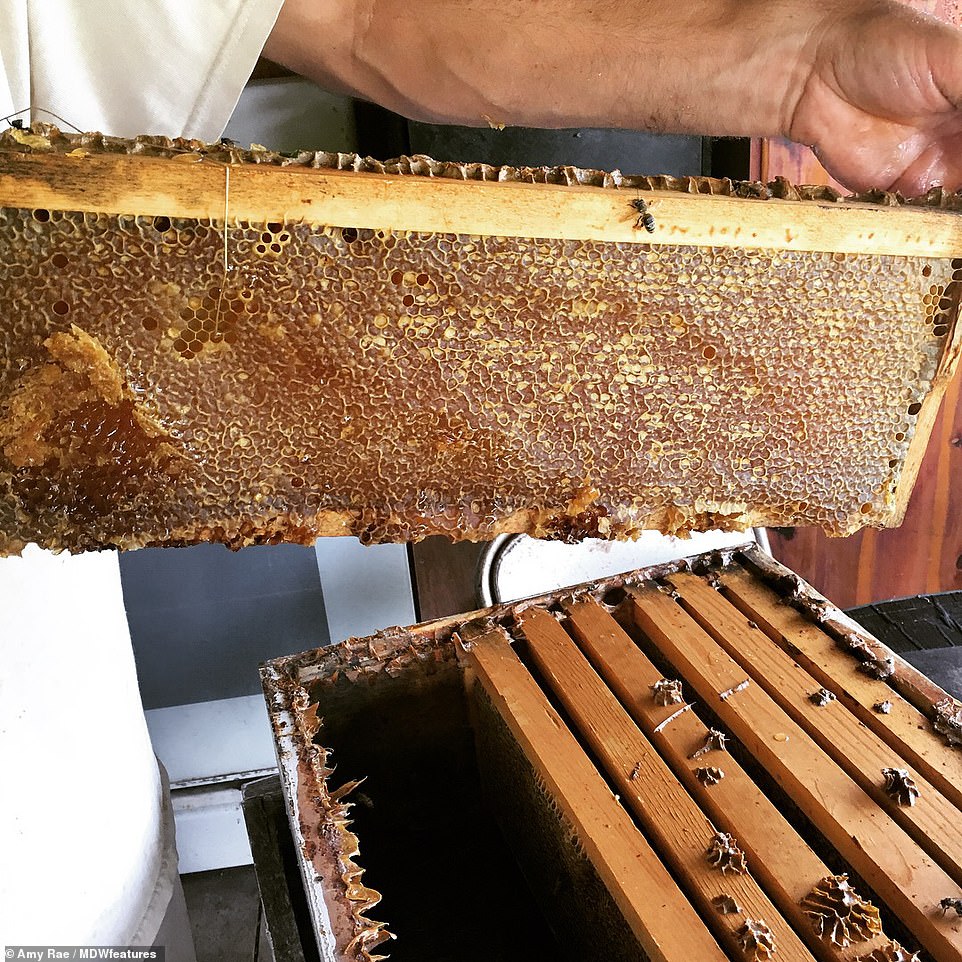 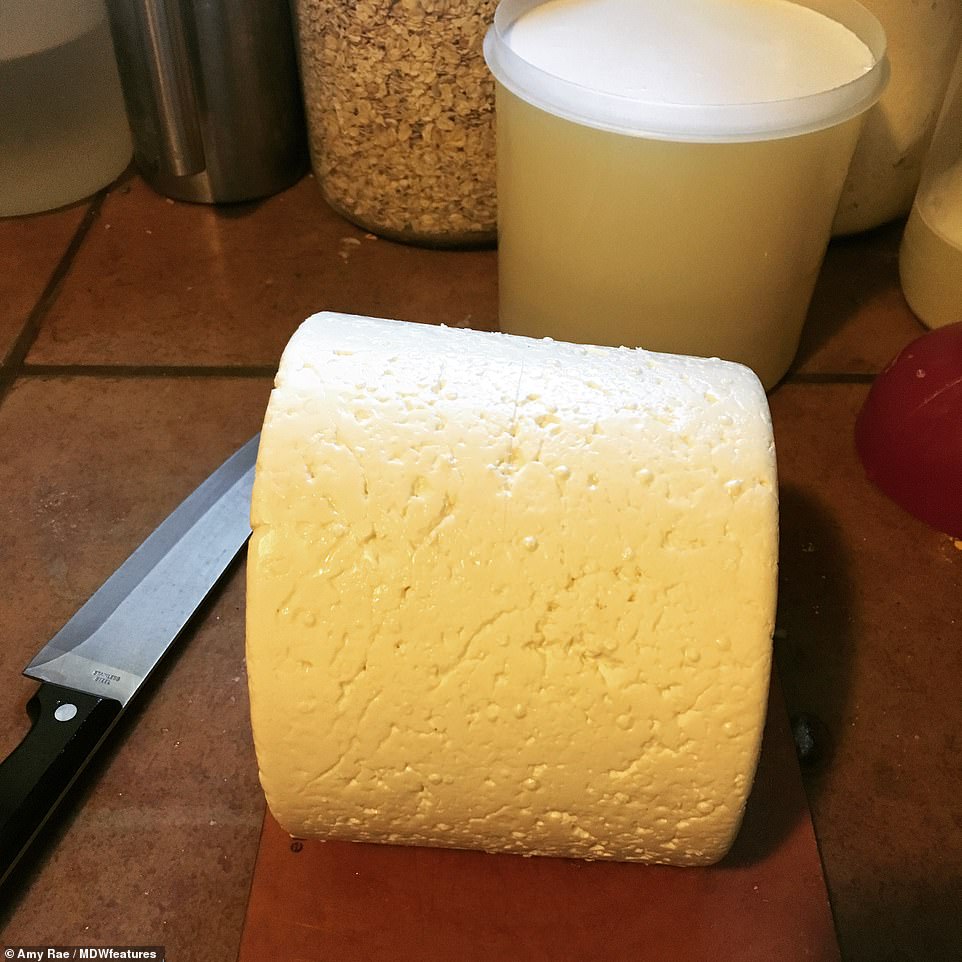 +16
She shares her words of advice to others who might wish to pursue this lifestyle. Homemade sheep cheese is pictured 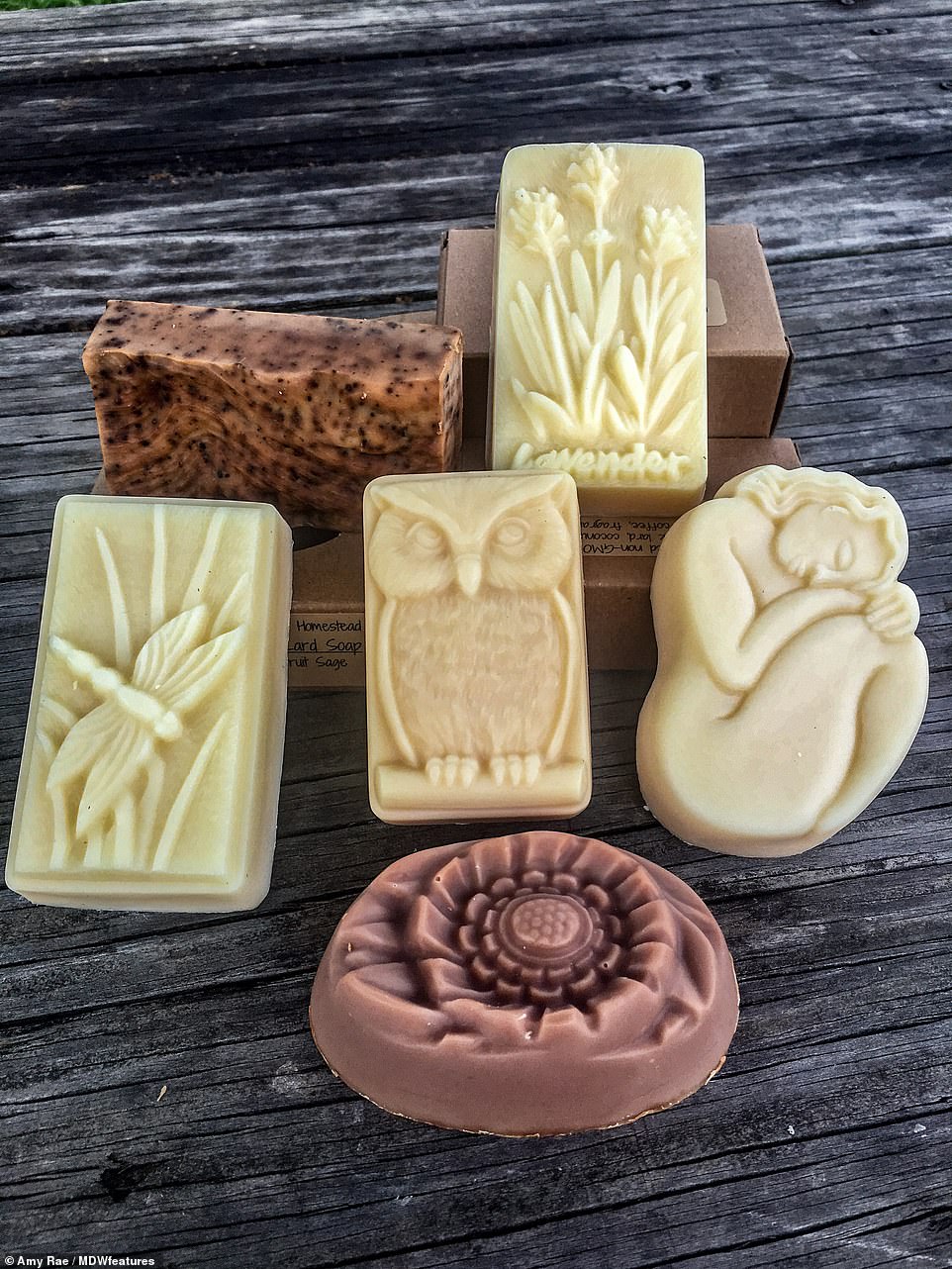 +16
Amy also makes her own handmade soaps, among other goods, which she sells
'Secondly, home-schooling, while being amazingly rewarding, is also incredibly draining psychologically and emotionally. It is close to all-consuming to have three small children around all the time.'
As well as home-schooling the children and ensuring that the farm and family life runs smoothly, Amy makes her own soaps, yarn, knitted products and cheese which she then sells.
Above all, this way of life affords the family a level of freedom that today's consumer driven lifestyle doesn't.
'We have no electric bill and we never lose power in storms, we don't feel guilty about using electricity because ours doesn't come from a power plant with a huge carbon footprint and emissions, we never wonder what is in our water, or is being taught to our children,' she said.
'We can grow foods that are hard or impossible to find in grocery stores, especially in a rural area, and don't have to worry about what's been put in or on them. More than anything, we can, to a large degree, do what we want, when we want.
'Our lives are not dictated by a job or school system, a grocery store or global conglomerate's revenue demands, or so many other things that are generally out of our control.'
Amy charts her family's homesteading adventures on their Instagram and website.
Finally, she shared her words of advice to others who might wish to pursue this lifestyle. 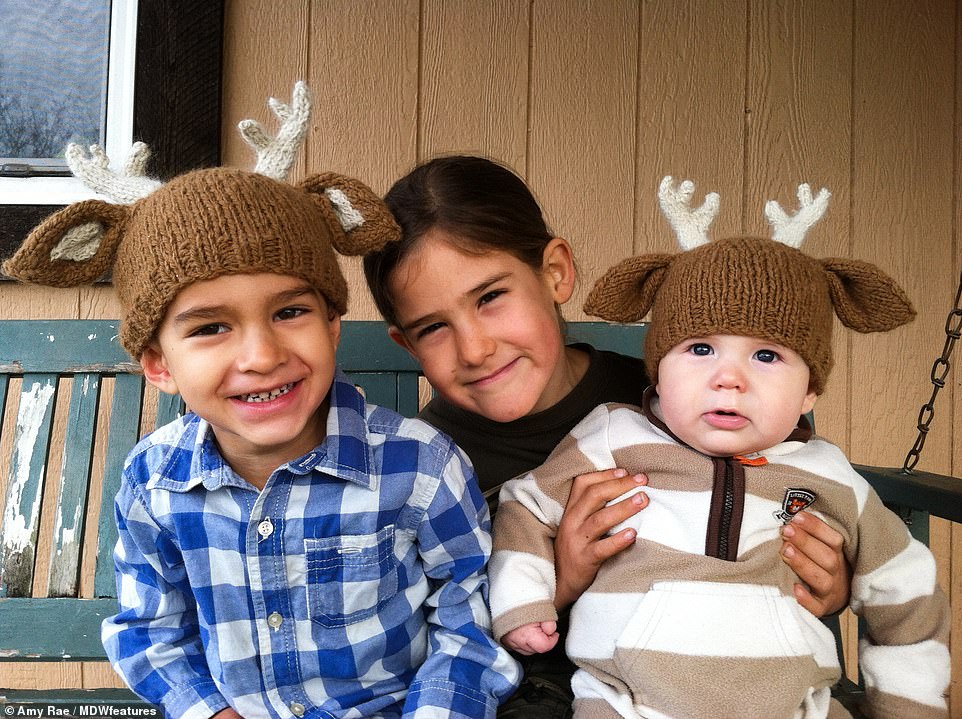 +16
Malachi is pictured left with his brothers; Liam, middle, and Ewan, right 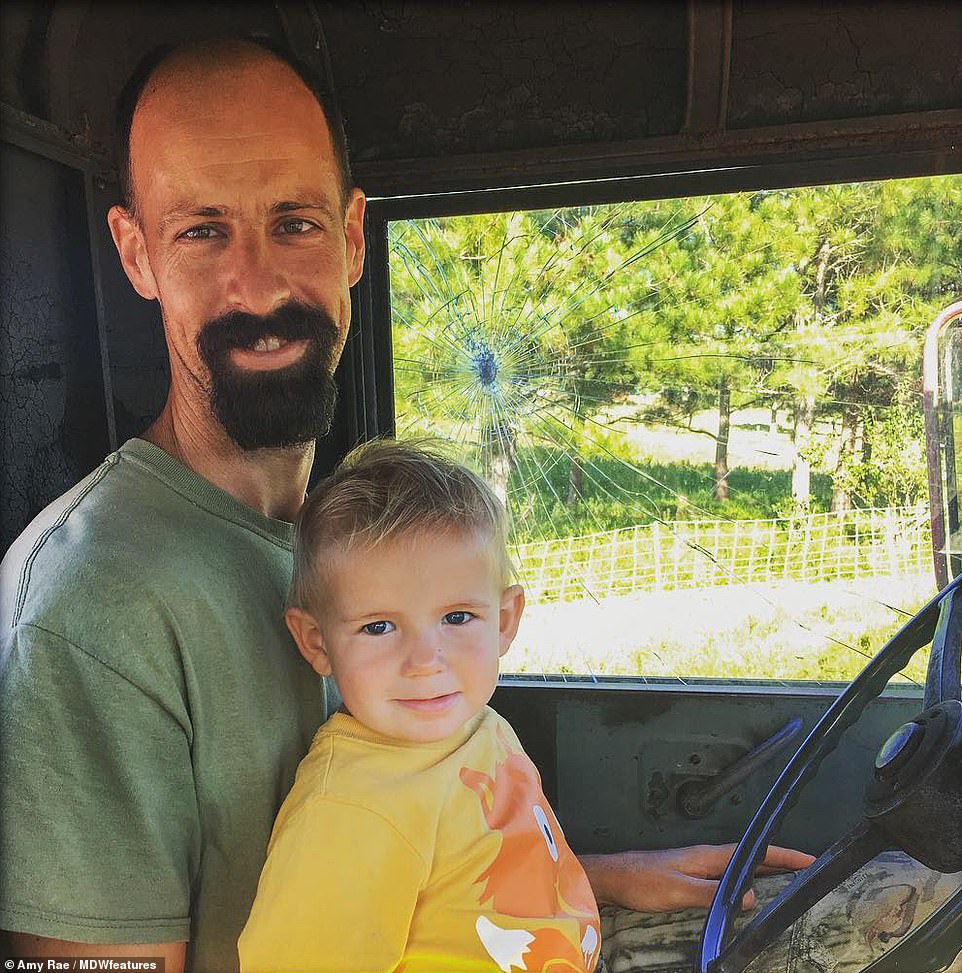 +16
Caleb is pictured holding his son, Ewan, in his truck. The family's rural life means that they rely on themselves and not large supermarkets for food 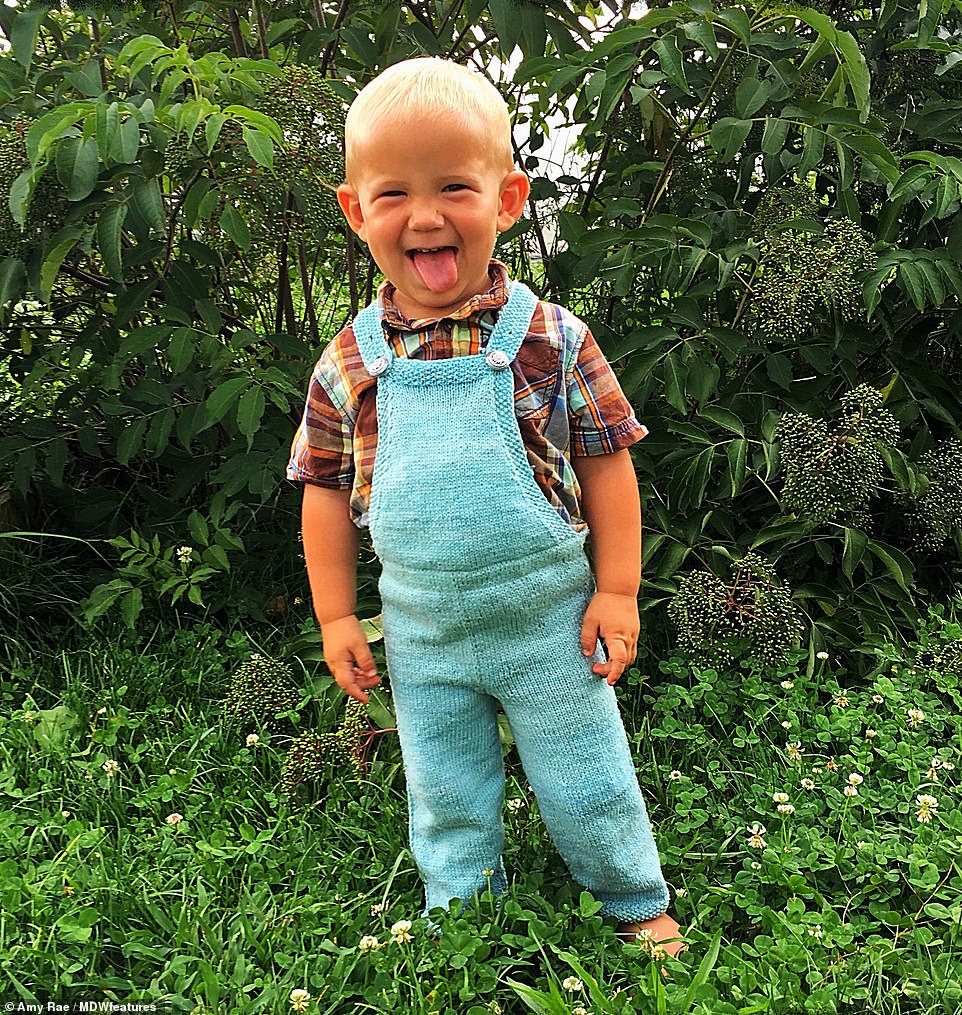 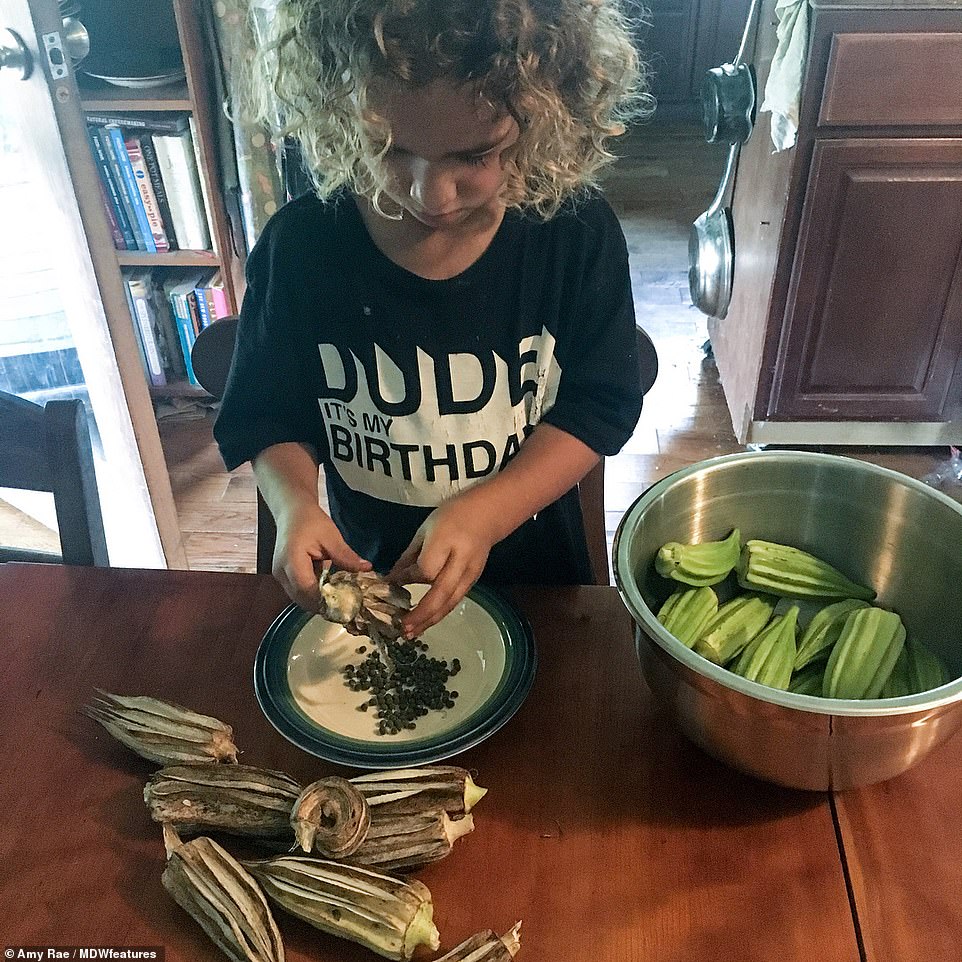 +16
Malachi helps prepare food for the family in their kitchen 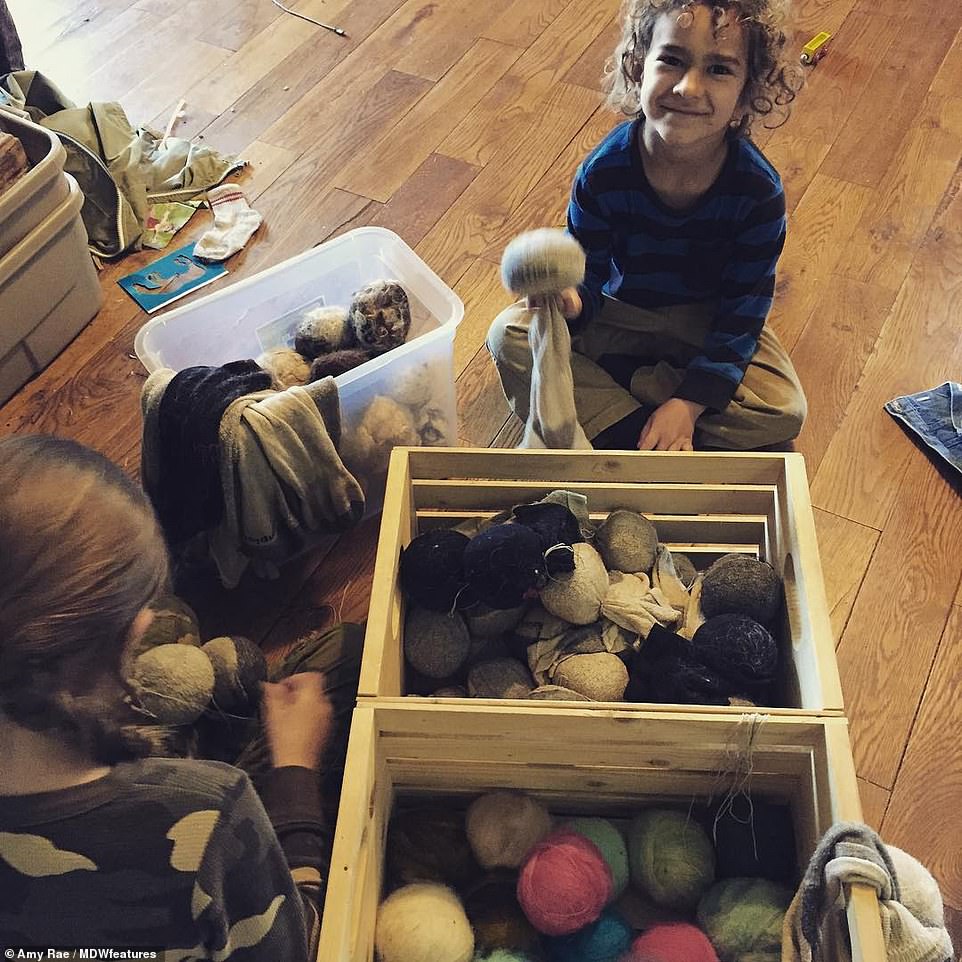 +16
The children, who who homeschooled by their mother, are seen playing with their yarn
'Do what you really want to, before it's too late,' she said.
'Read lots of books, talk to lots of people, research everything, and then you just have to try it for yourself. Conversely, be careful not to judge yourself by or hold yourself to a standard that is not appropriate - for example, since we live on a reclaimed coal mine our soil is awful.
'We simply can't follow many recommendations for gardening, installing fencing etc.
'Or - with solar power, we can't do things like raise baby chicks because we can't run heat lamps all night, so we have to find hens that will hatch eggs for us. Be creative, adaptive, and always remember what your goals are - they may be different than those of whoever wrote that book or made that YouTube video.
'Always be willing to adapt someone else's 'wisdom' to your own personal situation, and much like diets, there's nothing wrong with not subscribing to any particular 'belief system' - permaculture, no-till farming, square foot gardening, mob grazing, raised beds - they all have their benefits, as well as downsides, depending on your specific lifestyle, property, and goals.' 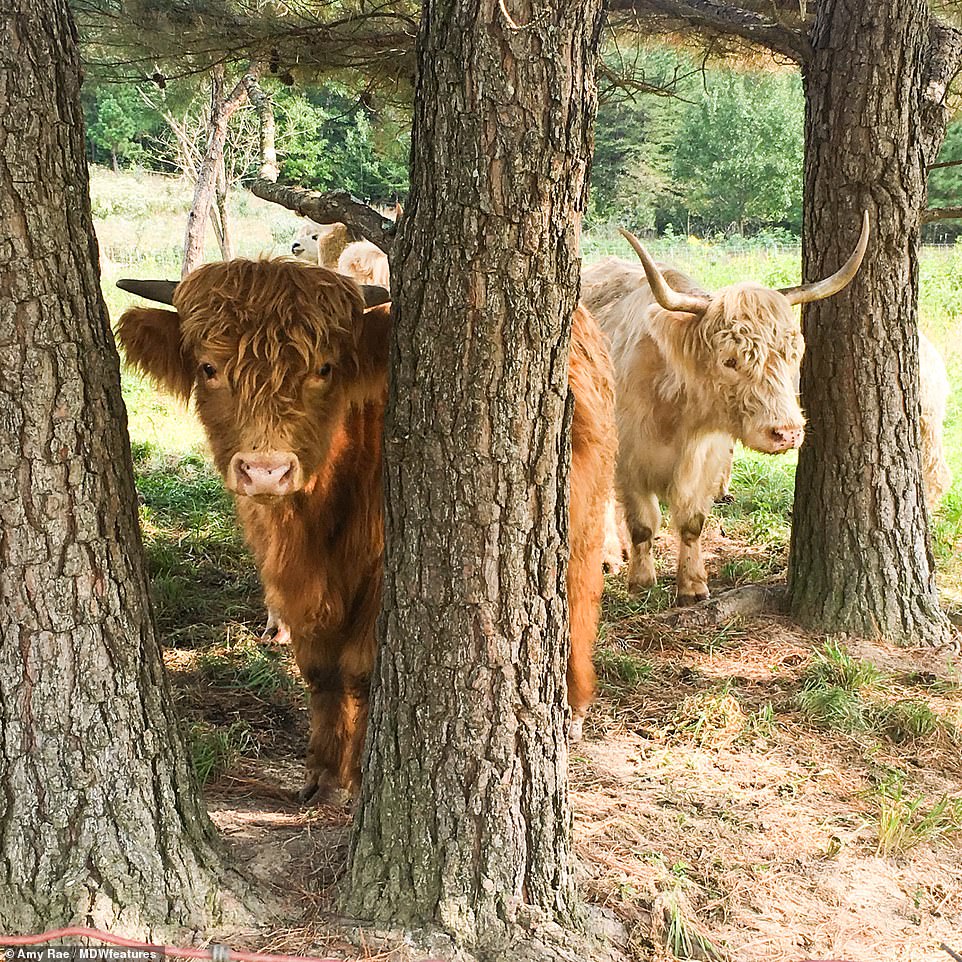 +16
The family has a whole host of animals that they raise for food. They own 30 highland cattle, 15 alpacas, 30 goats, 10 sheep ewes, 40 ducks, other poultry and two beehives 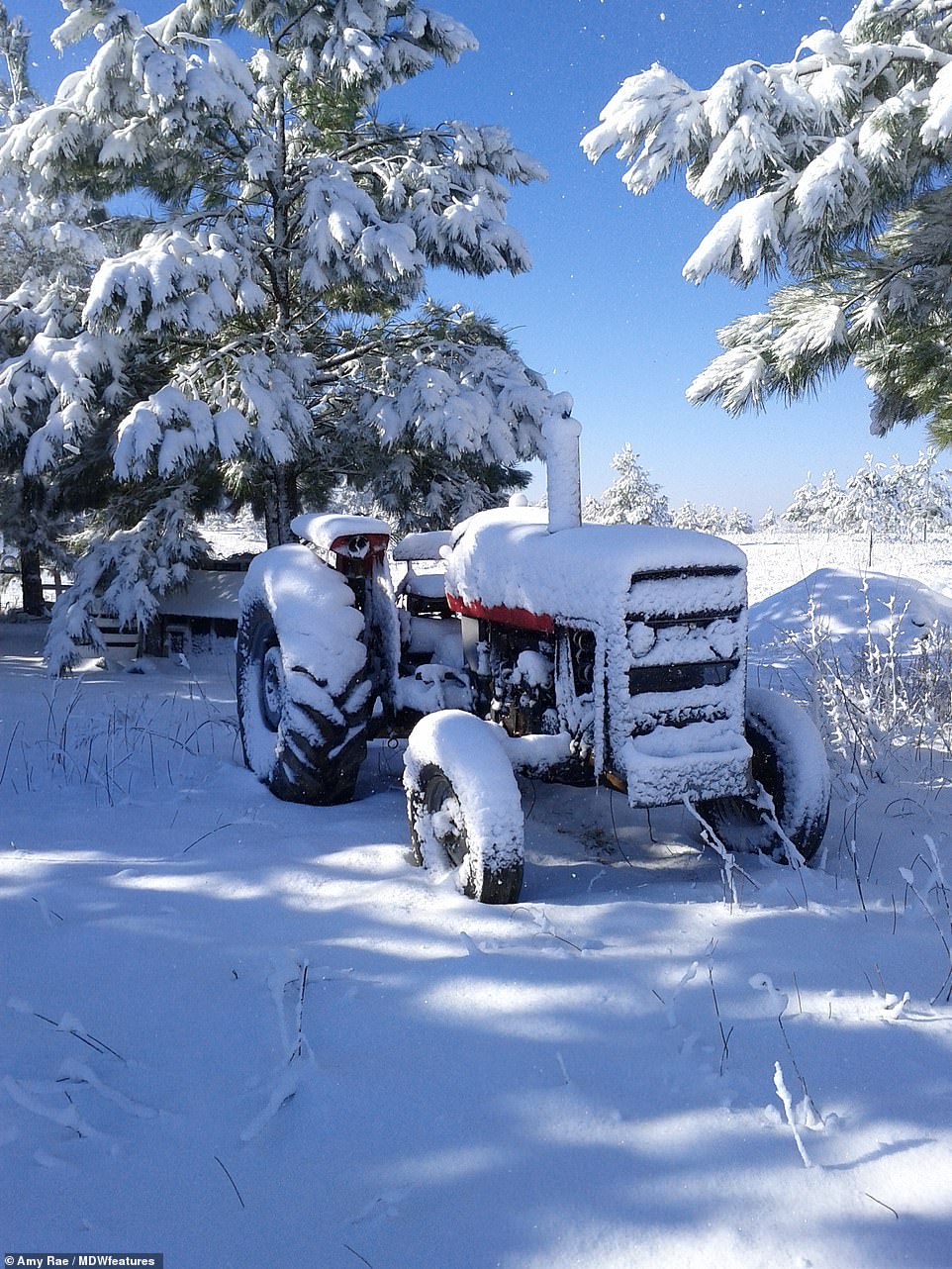 Their tractor is seen covered in snow. The independent family says they are interested in doing things for themselves, by themselves


French photographer Antoine Bruy has spent years travelling across Europe capturing men, women and children who have joined the so-called 'back-to-land' movement on their very own organic farms.
Scroll down for video

+11
At one with nature: French photographer Antoine Bruy travelled around Europe living with families who have turned their backs on modern civilization for a humble existence deep in the wilderness. This ramshackle house in Ramounat in The Pyrenees belongs to a German man called Peter who has lived there for the last 30 years. He moved to the area with his wife and children, but they left decades ago, it was reported by Feature Shoot

+11
Rustic: Arriving by donkey 20 years ago, English woman Kate settled on some land near the village of Bayacas in Sierra Nevada, Spain. These are some composting toilets which she has built with her own fair hands

+11
'Abandoning a lifestyle based on performance, efficiency and consumption': In order build trust and gain a deeper understanding of his subjects, Mr Bruy signed up to a movement which links volunteers with organic farmers. He then stayed with some for months at a time, helping out with jobs in return

+11
Pyramid dwelling: Many of the people Mr Bruy met have no access to running water, central heating or any other mod cons

+11
Wide open spaces: Mr Bruy took this image in Sierras de Cazorla, Segura y Las Villas Natural Park in Spain, where he encountered Amiro, a German who has been living in an area of the park where the nearest village is a three-hour walk away
He said: 'Since 2010, I travelled throughout Europe to meet men and women who made the radical choice to live away from cities, willing to abandon their lifestyle based on performance, efficiency and consumption.
'The people and places depicted in my pictures display various fates which I think, should not only be seen at a political level, but more importantly as daily and immediate experiences.

+11
Humble existence: The French photographer has documented families who have chosen to turn their backs on the breakneck speed of modern life to become at one with nature. With no access to running water, these two girls take a bath in washing up tubs in the Carpathian mountains in Romania

+11
Living off the land: Mr Bruy captured this picture of Olivier nursing a sheep while spending a month with the French shepherd. Here, Olivier treats one of his flock after it was bitten by a dog in Ardeche in France in 2010

+11
Shunned academia: Among the people Mr Bruy met was this former mathematics student called Vincent who has been living in the Pyrenees for the last seven years
He said: 'I give them a hand for different kind of tasks, like growing vegetables, fixing a roof, building a straw bale house or taking care of animals if they have some.
'This time allows me, somehow, to connect to the land, understand the way it works, and know the people I’m living with.
'This documentary project is an attempt to make a kind of contemporary tale and to give back a little bit of magic to our modern civilization.'

+11
Life out of the fast lane: A boy who has grown up in the so-called 'back-to-land' movement poses with his dog in Urs in The Pyrenees

A lesson in simplicity: Mr Bruy also stayed with Sabine, a philosophy and literature teacher who now raises cows with her husband Christian
Posted by ASC at 7:44 PM