Yellow Vest protesters demanded even more concessions from Emmanuel Macron on Tuesday even after he caved in to their demands for more pay and lower taxes with a £9billion spending splurge on Monday night.
Thomas Miralles, a Yellow Vest spokesman in the southern Pyrenees-Orientales department, said Macron had failed to listen to protesters and vowed to come to Paris this Saturday for his first demonstration in the capital.
Meanwhile thousands of students angered by Macron's education reforms joined the Yellow Vests on the streets for a 'black Tuesday' of unrest, further complicating matters for the French President.
And even Macron's traditional allies in Europe warned they will be 'closely monitoring' his spending plans to check whether they fall within EU limits. 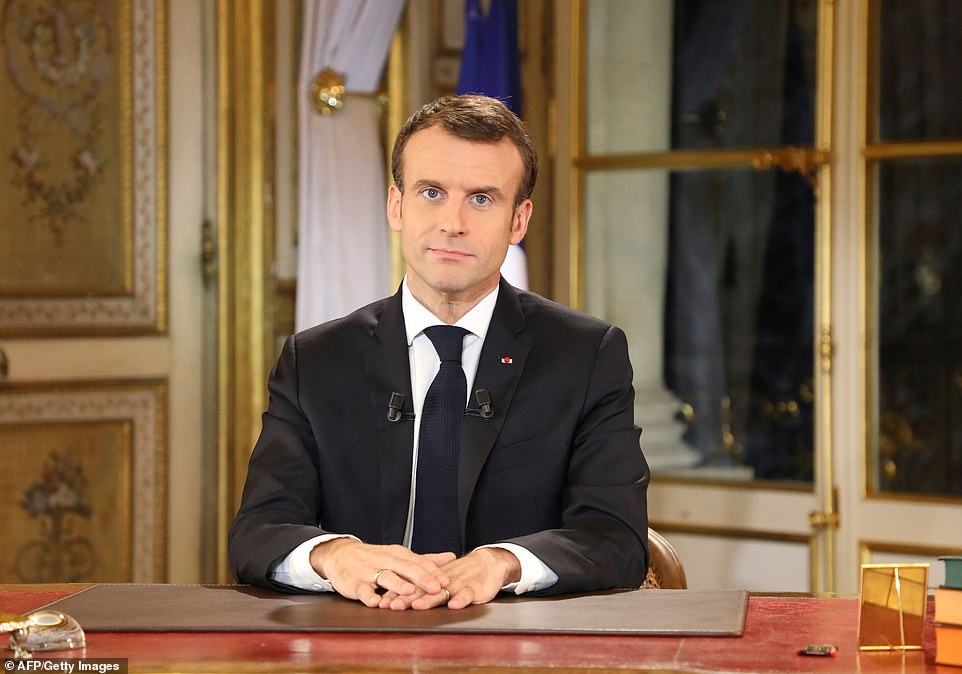 +22
Emmanuel Macron caved into the Yellow Vest protesters on Monday night by promising a £9billion package of tax cuts and wage hikes, which has now raised the prospect of clashes with EU budget chiefs 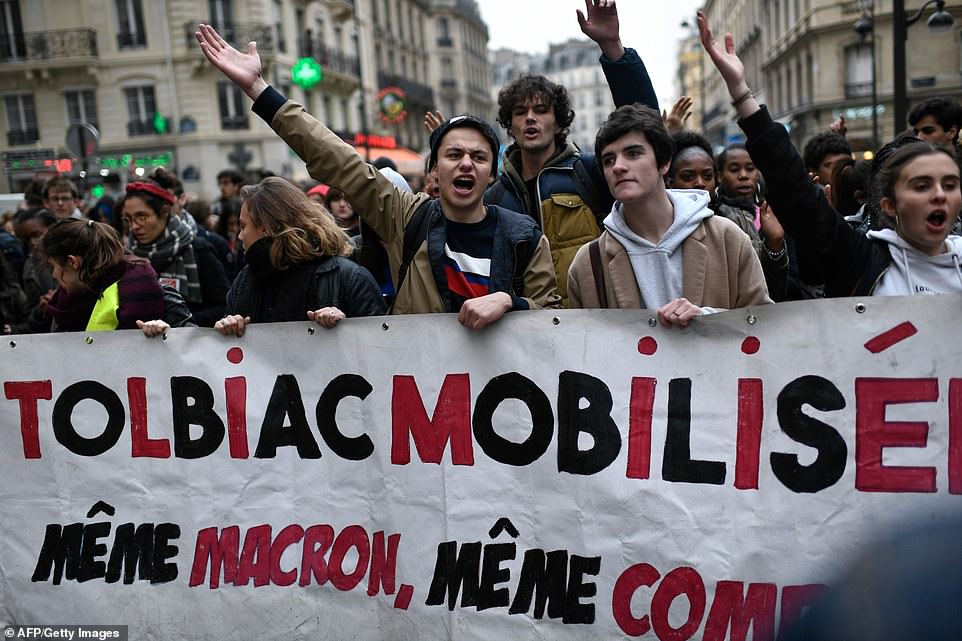 +22
But even as Macron offered an olive branch to Yellow Vest protesters, high school students angry at his education reforms took to the streets of Paris for a 'black Tuesday' of unrest 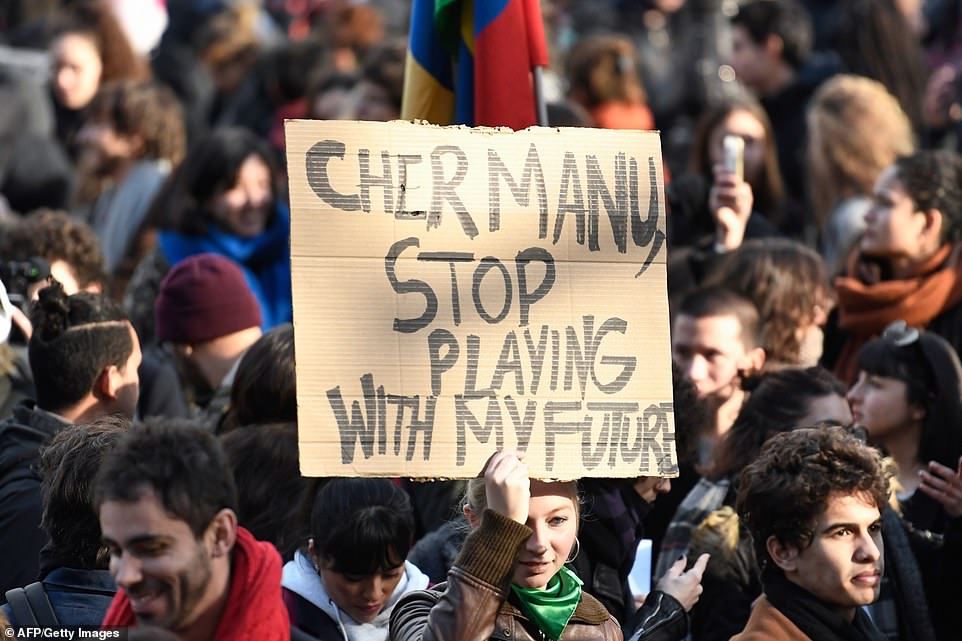 +22
Students oppose reforms to school tests and courses, stricter standards for getting into university, and a hike in fees for foreign students wanting to come and study in France 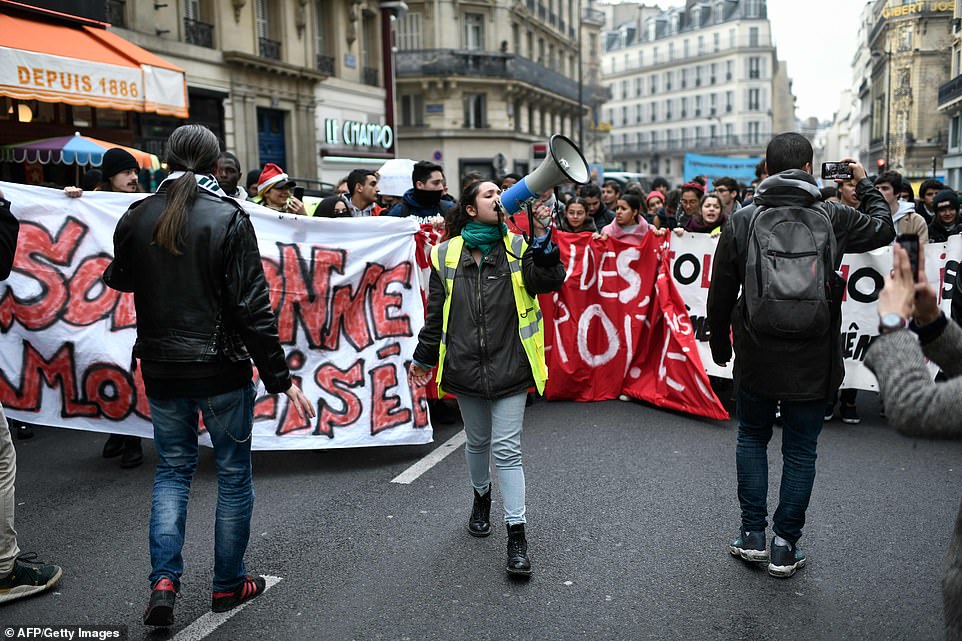 +22
High school students vowed to march in solidarity with the Yellow Vests, who promised to keep up their own campaign of unrest despite Macron's reforms, saying they were 'too little, too late' 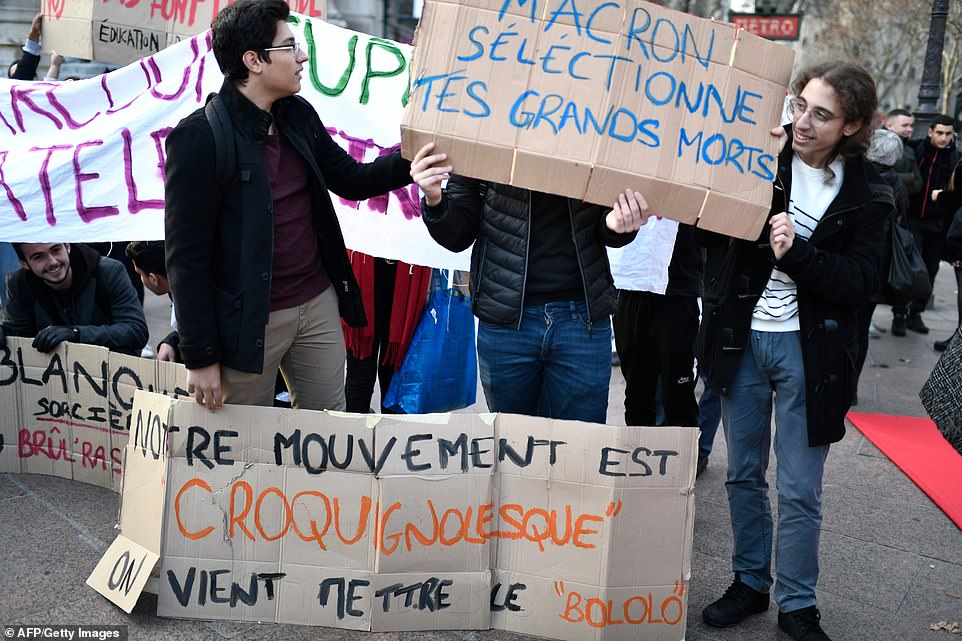 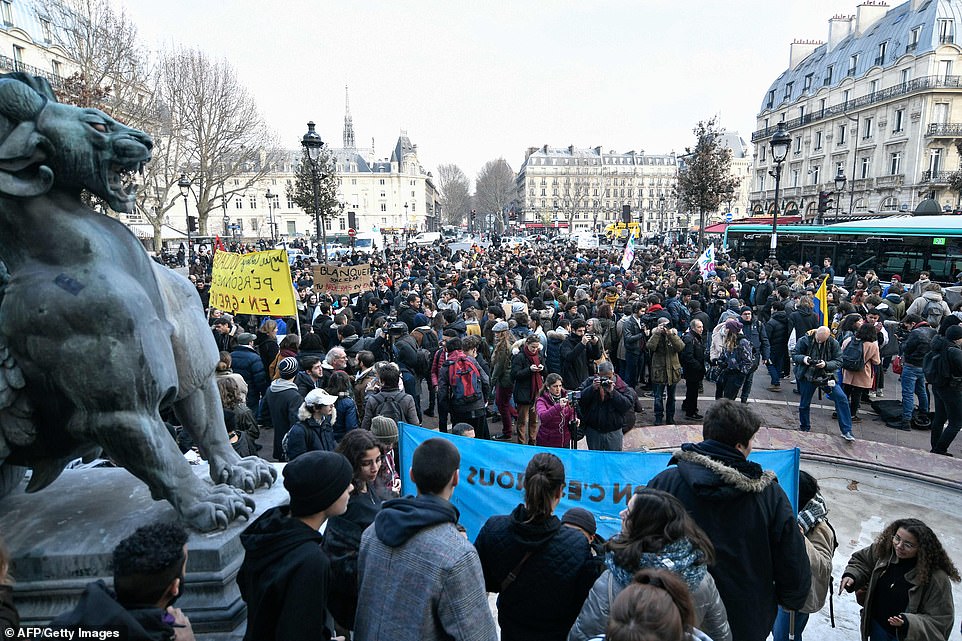 +22
Yellow Vests vowed to keep demonstrating even after Macron caved in to some of their key demands, and were joined on Tuesday by thousands of school students
Rules passed in the wake of the 2008 market crash require all member states to have a deficit of less than 3 per cent of GDP, debt at less than 60 per cent of GDP, and for any member state with debts over 60 per cent to take steps each year to reduce it.
France's current debt is 97 per cent of GDP while economists believe Macron's new spending plans will push the deficit above 3 per cent in 2019. Countries found in breach of the rules risk being hit with hefty fines.
France is not the only country to flout the EU's spending rules after Italy passed a budget earlier this year which will see the budget deficit rise to 3.1 per cent by 2020, with debt already at 131 per cent of GDP.
Protesters gathered around TV sets across France on Monday night to hear Macron promise a seven per cent rise in the minimum wage, an end to tax and surcharges on overtime and pensions, and tax-free bonuses.But opponents said this uncosted spending bonanza would not prevent thousands of protestors taking part in a fifth weekend of action, planned for Saturday.
Jean-Luc Melenchon, leader of the far-Left France Unbowed party, said: 'Emmanuel Macron thought he could hand out some cash to calm the citizens' insurrection that has erupted. I believe that Act Five will play out on Saturday.'
National Rally leader Marine Le Pen also predicted more disturbances, saying Mr Macron had 'given up on some of his tax errors', but 'refused to admit that it is the system he champions that is being questioned.'
Beyond the calls for institutional change - which could result in Mr Macron having to resign - the Yellow Vest movement wants even more tax cuts and pay rises. 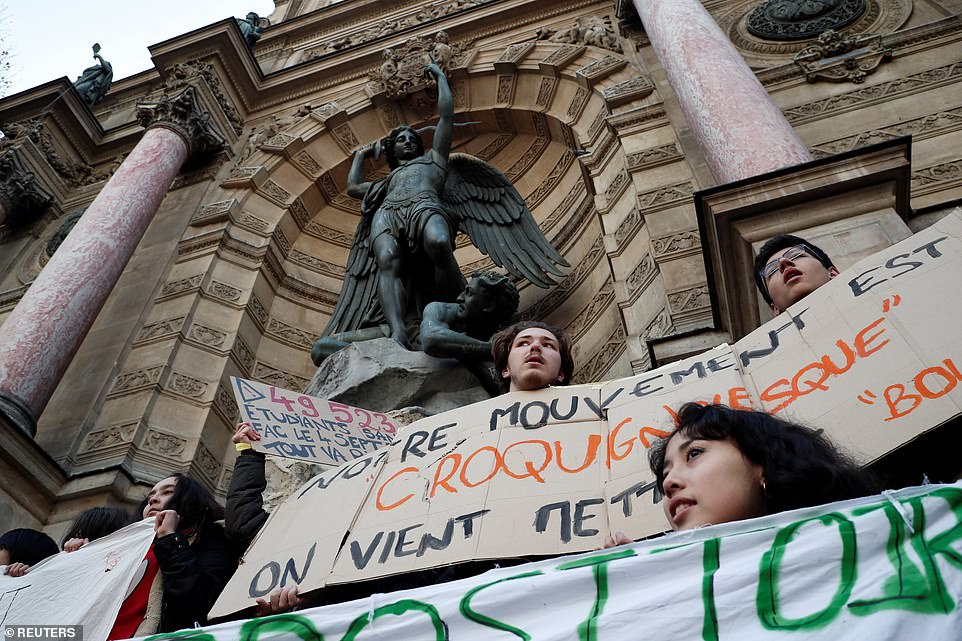 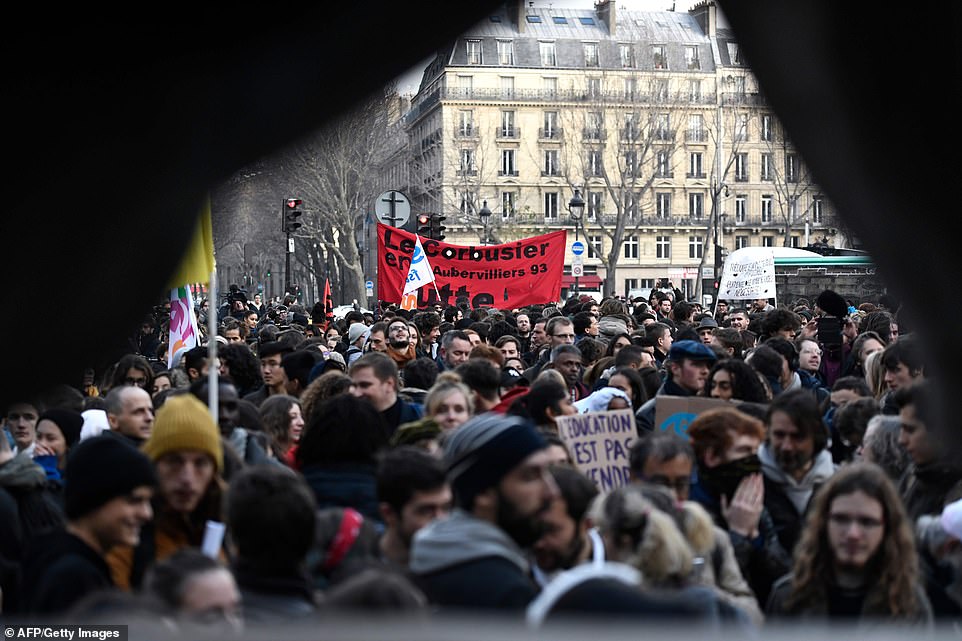 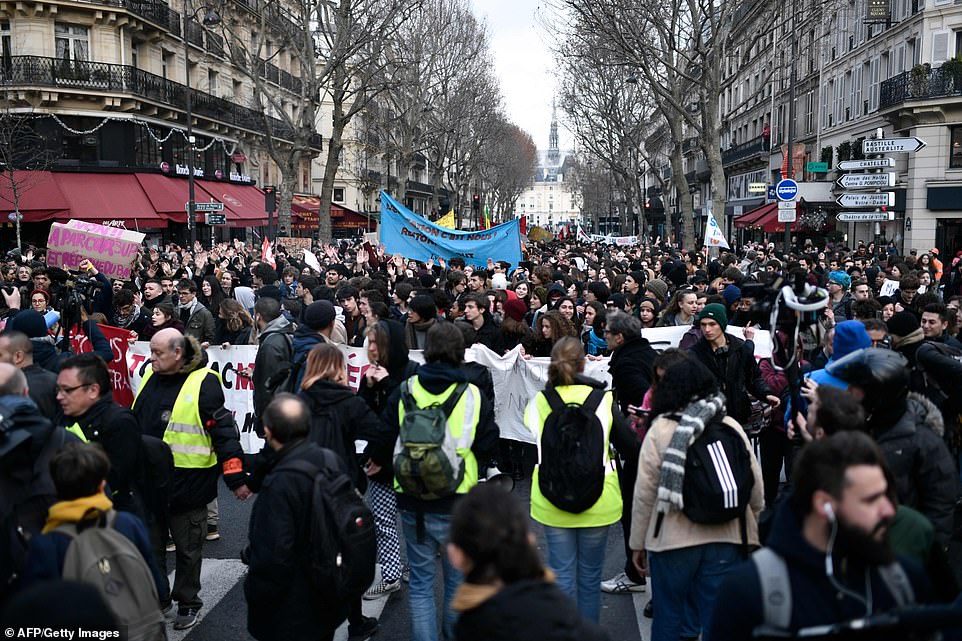 +22
The student protests come a day after Macron tried to placate angry Yellow Vests, who have been demonstrating for weeks on the streets of the French capital 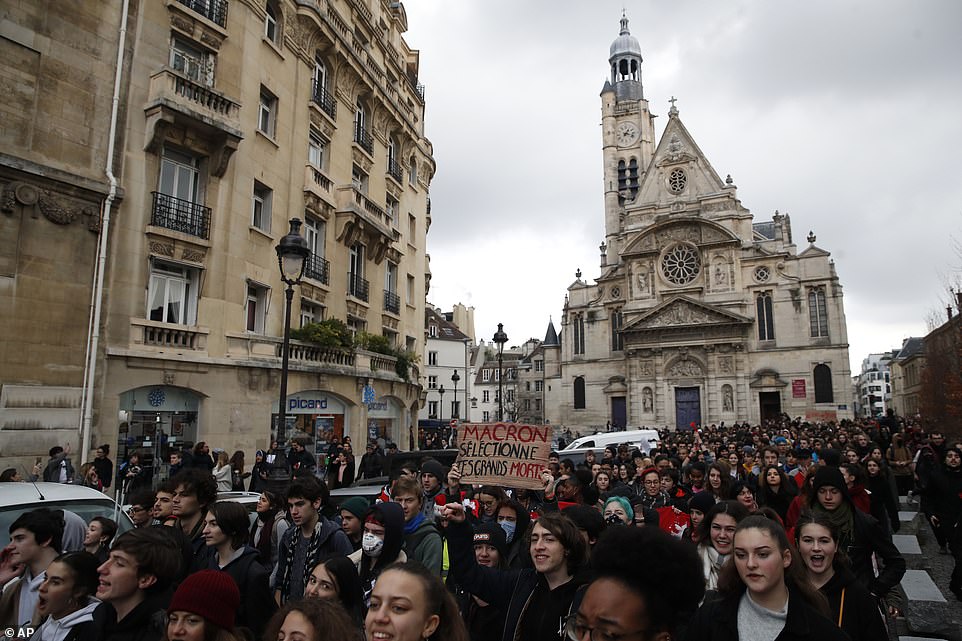 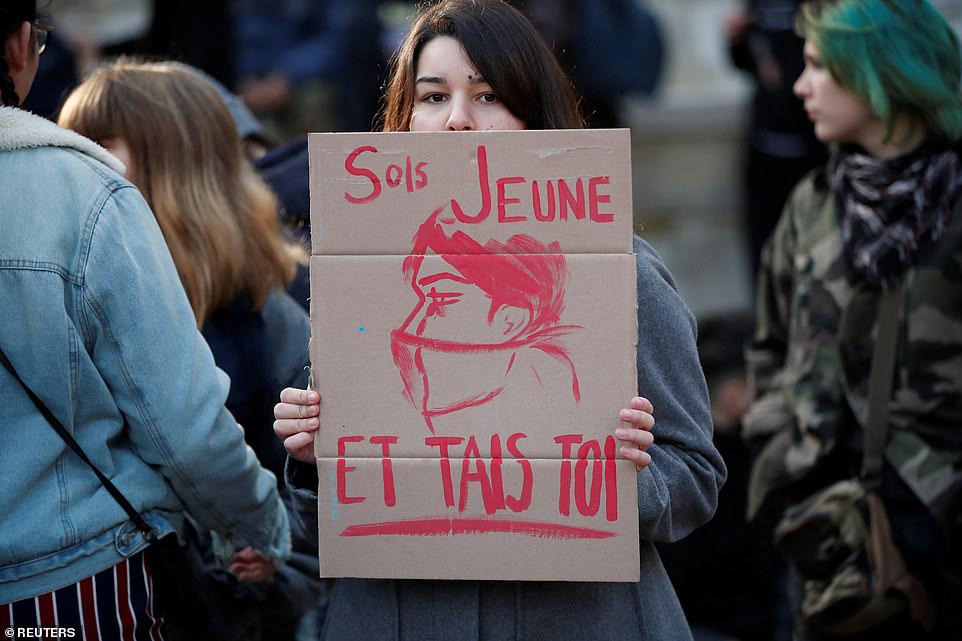 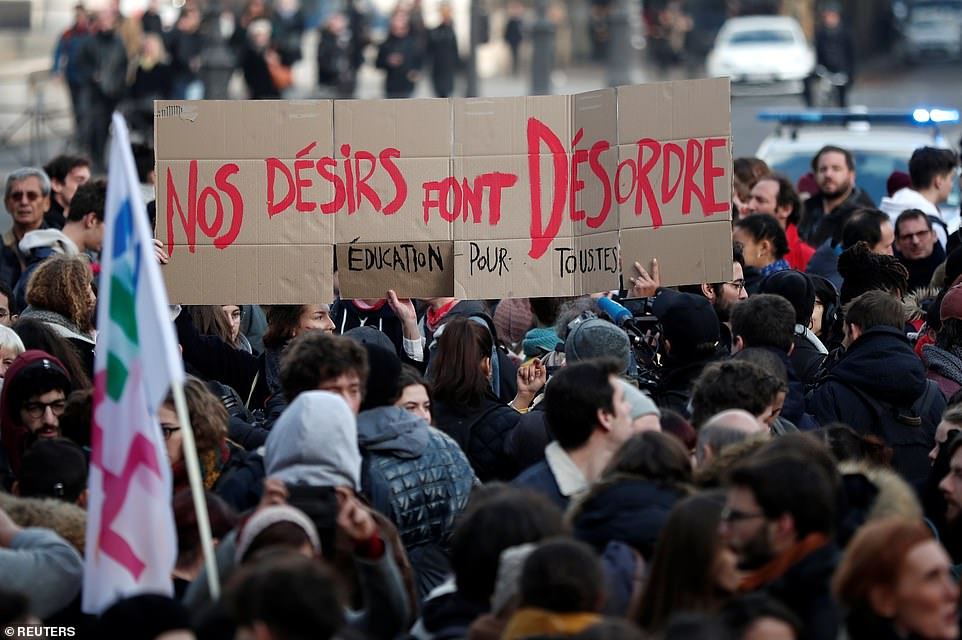 +22
A banner reads: 'Our desires are messy, education for all' during demonstrations in Paris
'In terms of substance, these are half measures,' said unofficial Vests spokesman Benjamin Caudy. 'We feel that Macron has got a lot more to give.'
Thierry, 55, a bicycle mechanic listening in the southern town of Le Boulou, said afterwards: 'It's just window dressing, for the media, some trivial measures, it almost seems like a provocation.
'All this is cinema, it doesn't tackle the problems of substance. We're really wound up, we're going back to battle.'
Gaetan, 34, from Rennes, added: 'Maybe if Macron had made this speech three weeks ago, it would have calmed the movement, but now it's too late.
'For us, this speech is nonsense.'
Less than an hour after the presidential address, the A9 toll booth from Spain was completely paralysed.
In the northwest, at a roundabout at the end of the A28 in Montabon, near Le Mans, 'yellow vests' gathered under a heated tent to watch the president on TV, sharing a picnic.
'Too bad, blew it again!' exclaimed Etienne. 'Santa Claus has nothing in his sack,' laughed Hubert.
Over in eastern France, at the Cafe de la Paix in Commercy, about 15 'yellow vests' watched Macron's speech with a glass of Picon and a basket of fries, interrupting the presidential address with ironic sneers.
'Sir feels bad,' Elisabeth, a 66-year-old retiree, said mockingly as the president acknowledged that he had 'hurt some'.
'It was about time,' added Damien, in his thirties. 'Liar,' a woman shouted.
'He is being held hostage so he drops some crumbs,' said Jonathan, a 35-year-old official. 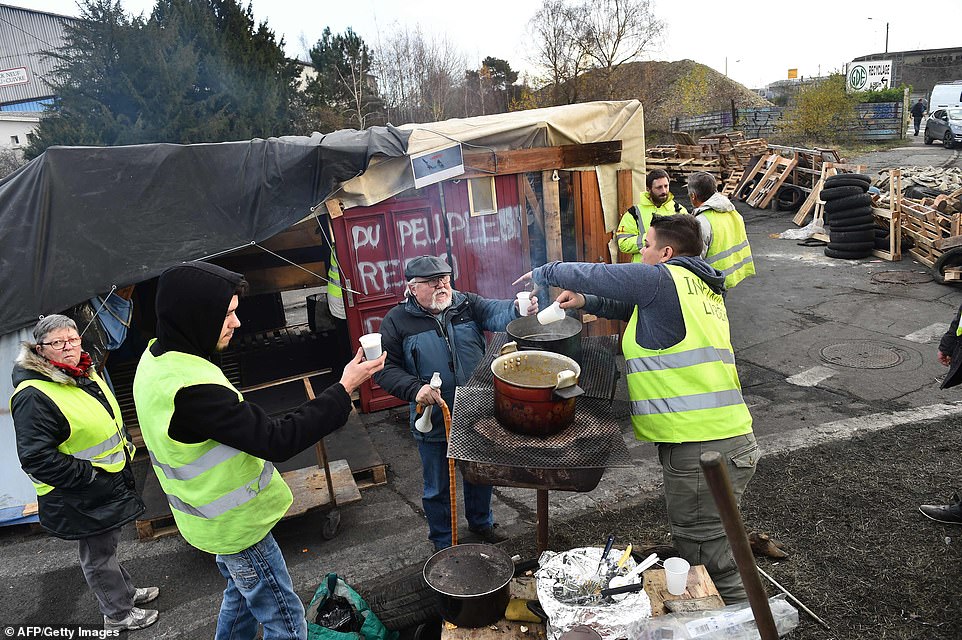 +22
But the demonstrators vowed not to give up after weeks of often violent protests, insisting that Macron's offer was too little, too late (pictured, protesters at an oil depot in Le Mans) 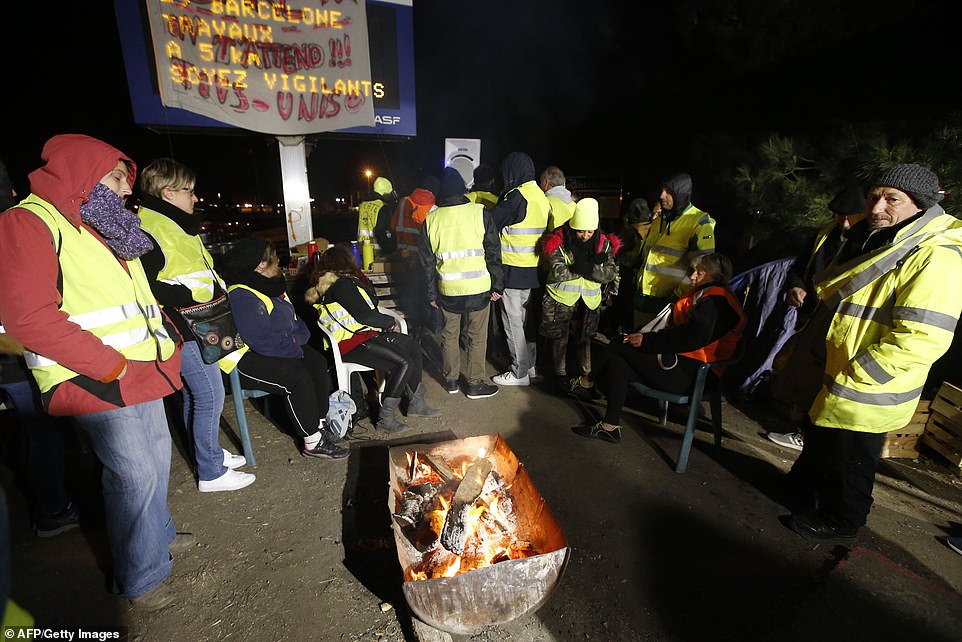 +22
Roads were brought to a standstill on Monday night after Macron's speech, as people refused to accept his reform package was genuine (pictured, demonstrators in Le Boulou) 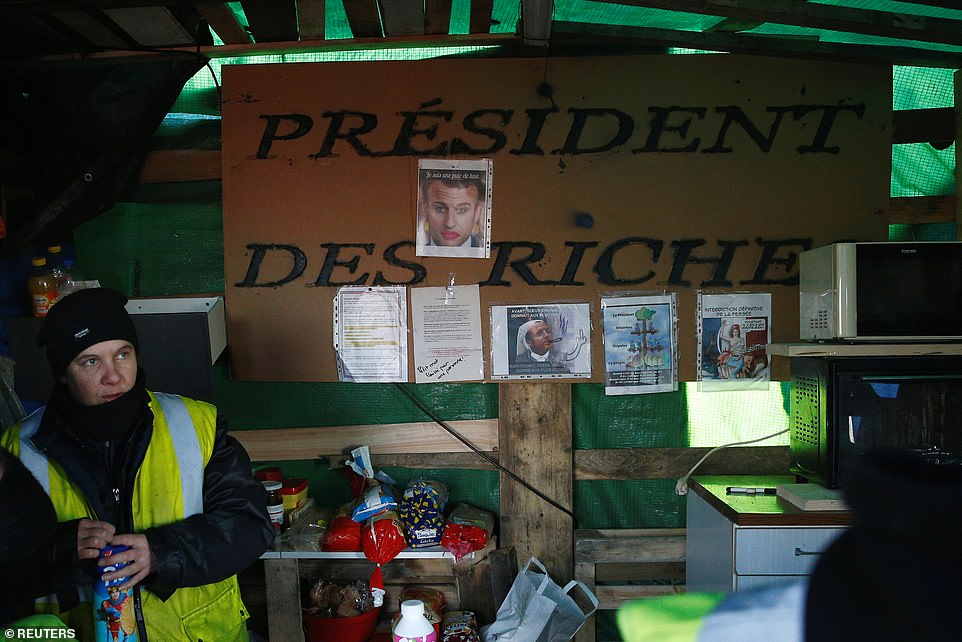 +22
A protester near Nantes Atlantique Airport stands next to a sign saying President of the Rich, which is covered in pictures of Macron 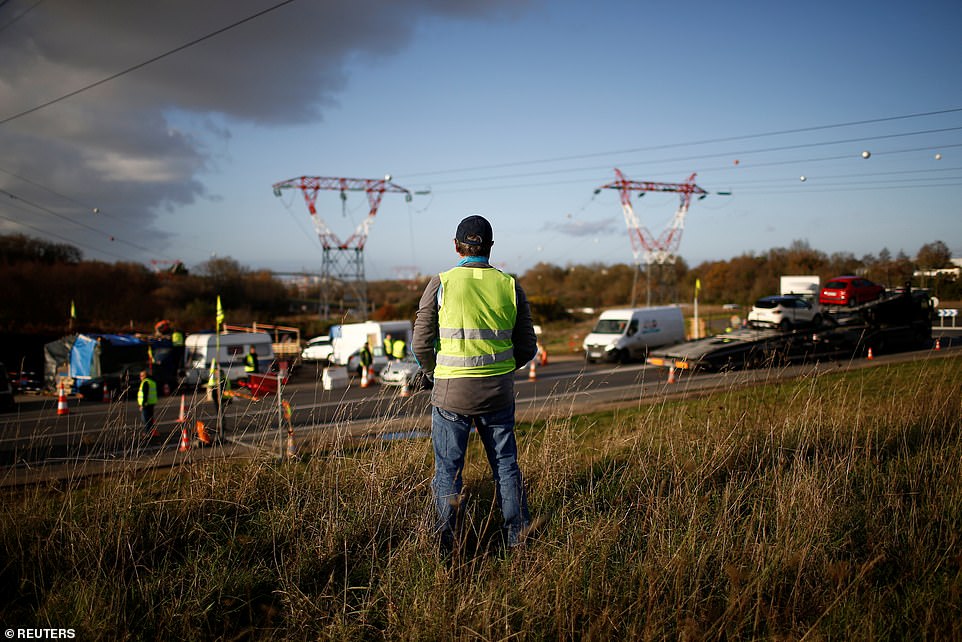 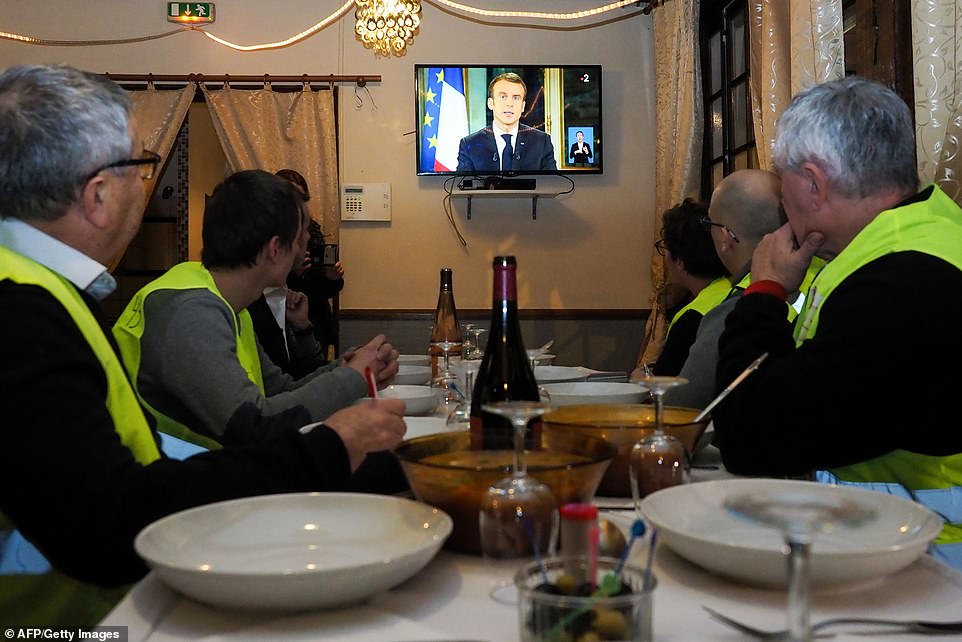 +22
Protesters take notes as they watch French President Emmanuel Macron's speech on Monday
'The people asked him to resign and he puts plasters on third-degree burns (...) this is total rubbish,' said Pierrot, an RSA artist in Albi.
For Luc, a pizza chef in Marseille, 'it's a charade. He announces bonuses to be paid by employers but how will they do it? They don't have more money.'
In a 12-minutes TV address on Monday, Macron pledged a €100 (£90) per month increase in the minimum wage, taking it to €1498 (£1360).
There were also be an end-of-year bonus that employers can pay without being charged by the government, while taxes on those earning less than €2000 (£1800) will also end on January 1.
Mr Macron also ruled out any return of the Solidarity Wealth Tax, saying that he wanted to stop rich entrepreneurs 'moving abroad', so preventing 'job creation'.
The extraordinarily generous package of measures represents a massive U-turn by Mr Macron who originally said he would not yield to rioting as he tried to liberalise the sluggish France economy.
So-called Yellow Vest fuel protestors first took to the streets on November 17, and this led to the president scrapping green charges on petrol and diesel.
'I heard the anger was first of all against the tax, but it's deeper than that, and this anger could be our chance,' said Mr Macron.Yellow vested 'Gilet jaune' protesters block the A9 highway toll near Le Boulou, southern France on Monday night 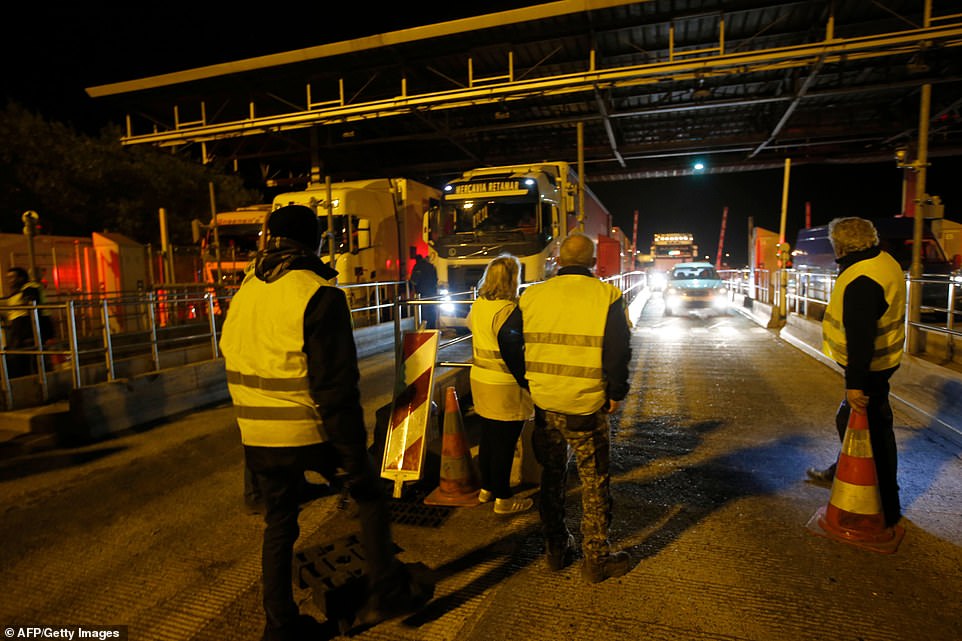 +22
Rioting has seen 4,523 arrests across France since November 17. Pictured yellow vest protesters at a toll on the A9 highway 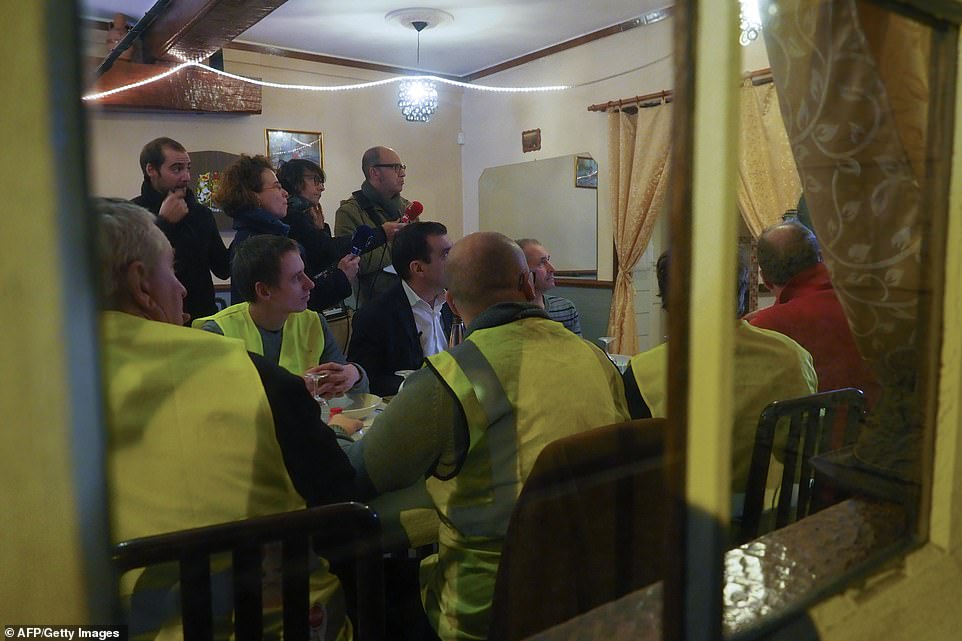 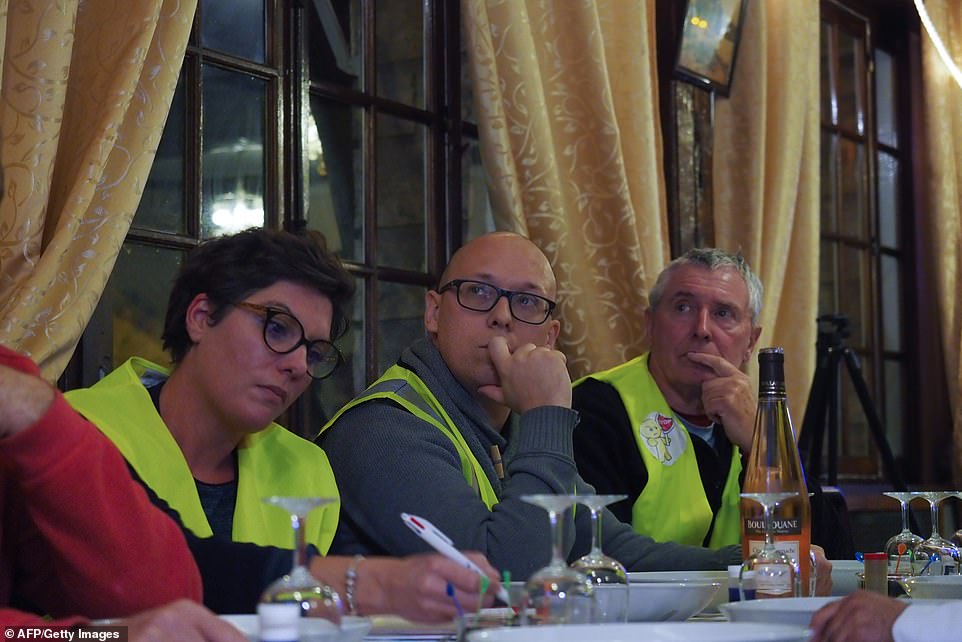 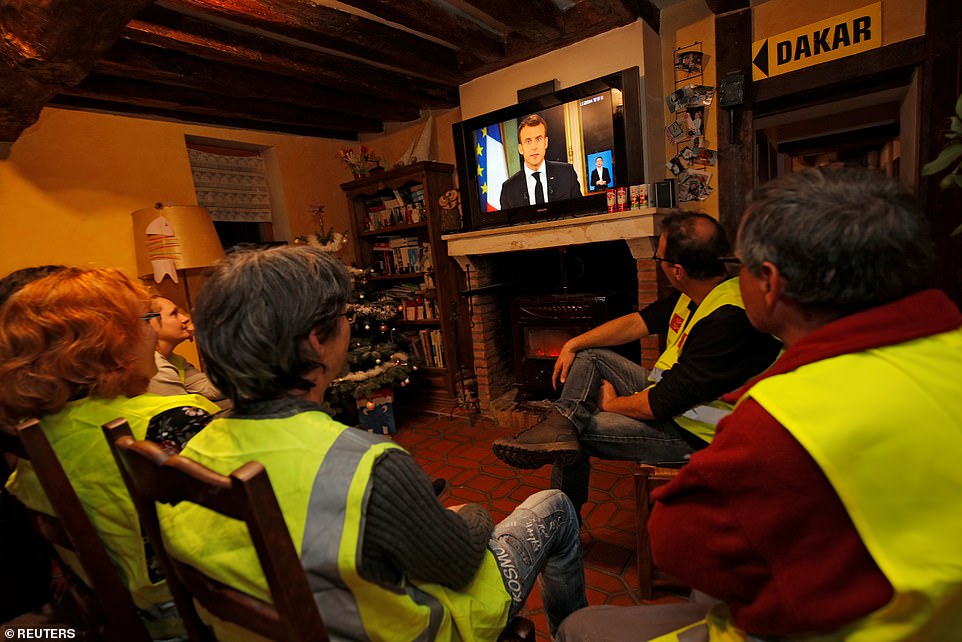 +22
Yellow Vest protesters watch Mr Macron's TV address in their high visibility jackets in a house in Gaillon, northern France this evening There are couples who struggle to make ends meet, brave single mothers or widows who can't afford child care, and poor pensioners who often have to help children and grandchildren, as well as people with disabilities.'
Mr Macron said this 'Forgotten France' has existed for at least 40 years, and that everything had to be done to held them.
Referring to rioting which has seen 4,523 arrests across France since November 17, Mr Macron said: 'I will not compromise on violence. When violence unfolds, freedom ends.'
Mr Macron, who served in Francois Hollande's Socialist government before becoming President himself in 2017, particularly accused 'opportunists' including looters of 'taking advantage of sincere anger.'
He added: 'No anger justifies attacking a policeman, degrading shop and public buildings. From now on it is the peace and the Republican order which must reign.'
The yellow vest movement - named after high-visibility vests worn by demonstrators - began online earlier this year, before spreading to the streets in November.
What started as opposition to a proposed fuel tax rise has since snowballed into general anger about a lack of concern for the poor and working class.
They see Macron as a 'leader for the rich' and are demanding - among other things - a reintroduction of taxes on the rich, a rise in minimum wage, and for Macron to go.
Posted by ASC at 9:59 AM