PICTISH SCOTLAND BEFORE AND AFTER BRAVEHEART


The Picts were a savage tribe who lived north of the Firth of Forth - very few Pictish stones have ever been found outside their traditional territory.

'This is the truth I tell you:
of all things freedom’s most fine.
Never submit to live, my son,
in the bonds of slavery entwined.’William Wallace - His Uncle’s proverb,
from Bower’s Scotichronicon c.1440’s
The reputation of William Wallace runs like a fault line through later medieval chronicles. For the Scots, William Wallace was an exemplar of unbending commitment to Scotland’s independence who died a martyr to the cause. For centuries after its publication, Blind Harry’s 15th-century epic poem, ‘The Wallace’, was the second most popular book in Scotland after the Bible.
For the English chroniclers he was an outlaw, a murderer, the perpetrator of atrocities and a traitor. How did an obscure Scot obtain such notoriety?
Who was William Wallace?
Wallace was the younger son of a Scottish knight and minor landowner. His name, Wallace or le Waleis, means the Welshman, and he was probably descended from Richard Wallace who had followed the Stewart family to Scotland in the 12th century.
Little is known of Wallace’s life before 1297. He was certainly educated, possibly by his uncle - a priest at Dunipace - who taught him French and Latin. It’s also possible, given his later military exploits, that he had some previous military experience.
Wallace’s Rising
In 1296 Scotland had been conquered. Beneath the surface there were deep resentments. Many of the Scots nobles were imprisoned, they were punitively taxed and expected to serve King Edward I in his military campaigns against France. The flames of revolt spread across Scotland. In May 1297 Wallace slew William Heselrig, the English Sheriff of Lanark. Soon his rising gained momentum, as men ‘oppressed by the burden of servitude under the intolerable rule of English domination’ joined him ‘like a swarm of bees’.
From his base in the Ettrick Forest his followers struck at Scone, Ancrum and Dundee. At the same time in the north, the young Andrew Murray led an even more successful rising. From Avoch in the Black Isle, he took Inverness and stormed Urquhart Castle by Loch Ness. His MacDougall allies cleared the west, whilst he struck through the north east. Wallace’s rising drew strength from the south, and, with most of Scotland liberated, Wallace and Murray now faced open battle with an English army. 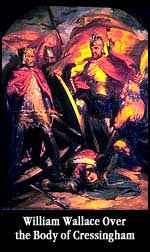 On 11th September Wallace and Murray achieved a stunning victory at the Battle of Stirling Bridge. The English left with 5,000 dead on the field, including their despised treasurer, Hugh Cressingham, whose flayed skin was taken as a trophy of victory and to make a belt for Wallace’s sword. The Scots suffered one significant casualty, Andrew Murray, who was badly wounded and died two months later.
'Commander of the Army of the Kingdom of Scotland’ - the outlaw Wallace was now knighted and made Guardian of Scotland in Balliol’s name at the forest kirk, at either Selkirk or Carluke.
It was a remarkable achievement for a mere knight to hold power over the nobles of Scotland. In a medieval world obsessed with hierarchy, Wallace’s extraordinary military success catapulted him to the top of the social ladder. He now guided Scottish policy. Letters were dispatched to Europe proclaiming Scotland’s renewed independence and he managed to obtain from the Papacy the appointment of the patriotic Bishop Lamberton to the vacant Bishopric of St Andrews.
Militarily he took the war into the north of England, raiding around Newcastle and wreaking havoc across the north. Contemporary English chroniclers accused him of atrocities, some no doubt warranted, however, in Wallace’s eyes the war, since its beginning, had been marked by brutality and butchery. 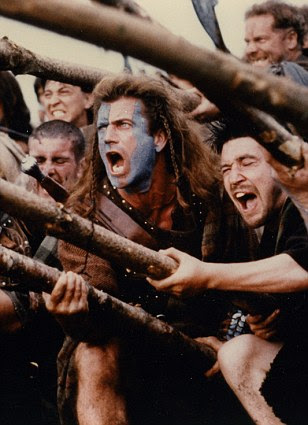 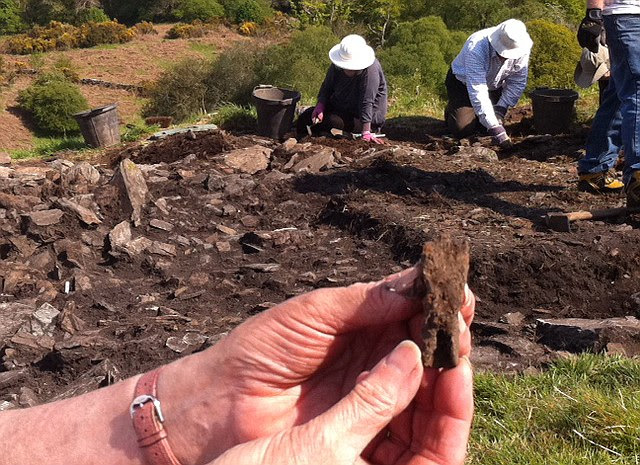 A spearhead from the burnt-out fort on Trusty's Hill, which archaeologists now think may have been the centre of a lost Dark Ages kingdom

WHO WERE THE PICTS? THE TRIBE WHO HELD OUT IN THE NORTH 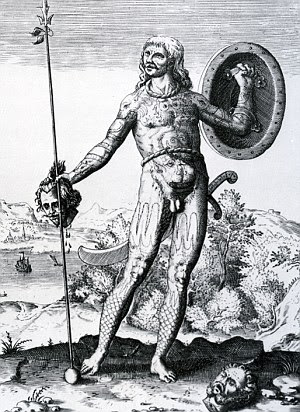 Mel Gibson's blue face paint in Braveheart is a nod to the Pictish tradition of body-paint - but the real Picts fought stark naked, and there are records of them doing so up until the 5th Century.
The Roman name for the people - Picti - means 'painted people'. It's not known what they called themselves.
The habit of fighting naked, especially in the cold Scottish climate, didn't harm the tribe's reputation for ferocity.
Picts held the territory north of the Firth of Forth in Scotland - and were one of the reasons even heavily armoured Roman legions could not conquer the area.
It's long been debated how the Picts and their Southern neighbours the Britons interacted with one another. The discoveries in Galloway hint that the two might have allied, at least briefly - before the fort was burnt to the ground.
‘At Trusty's Hill we see a Z-rod and double disc which is a classic Pictish symbol. The other symbol on the stone is a fish monster with a sword, which is unique to this site.
‘It could be that we are seeing an alliance between the Picts and local Britons - two crests coming together, almost like a coat of arms.’
Mr Toolis said the vital find was the African pottery, however.
He said: ‘This pottery shard, which looks like part of the rim of a bowl, is African Red Slip Ware, which came from Carthage and dates to the sixth century AD.
‘It is very rare in British, let alone Scottish Dark Age sites - the early Christian monasteries at Whithorn and Iona being the only other Scottish sites we can think of.
‘It not only indicates that Trusty's Hill was inhabited at the same time as when one would expect the Pictish Carvings to have been made but it means that very high status people in post-Roman Scotland lived here.
‘We might be discovering the evidence to show that Trusty's Hill was a stronghold of the Dark Age Kings of Galloway.
‘It could even be further evidence that the Dark Age Kingdom of Rheged, thought to have been located somewhere between Wales and Ayrshire, may actually have been in Dumfries and Galloway.’
Trusty's Hill was excavated in 1960, when vitrified stone - subjected to intense heat and effectively melted - was first identified.
The fort had clearly been burnt down, possibly at the hands of a Northumbrian enemy.
Mr Toolis said: ‘The fort was captured and destroyed. It would have burned in spectacular fashion, and the flames would have been seen miles away for days.
‘One known enemy of this area, who existed around the same time, was the Northumbrian known as Flamddyn, or Flame Bringer, which would certainly be an appropriate name.’
From the soft rolling hills of the South Downs to the forbidding mountains of the Scottish highlands, Britain is blessed with some of the most varied and magical landscapes in the world.
And its utterly spellbinding beauty could hardly be better revealed than in the stunning snaps shown below. 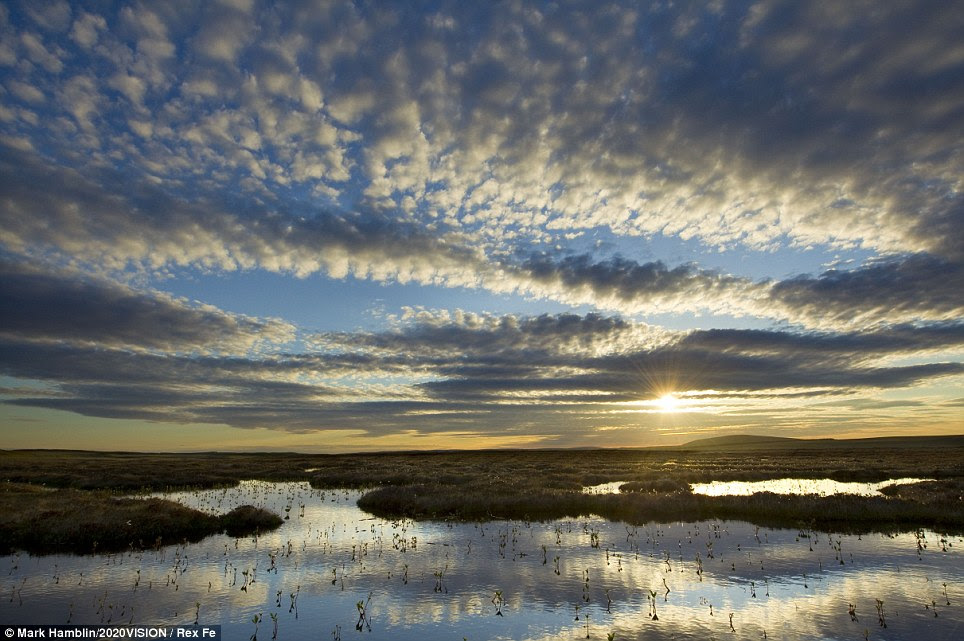 Stunning vista: The sun sets on Forsinard Flows RSPB reserve in Sutherland in the Scottish Highlands 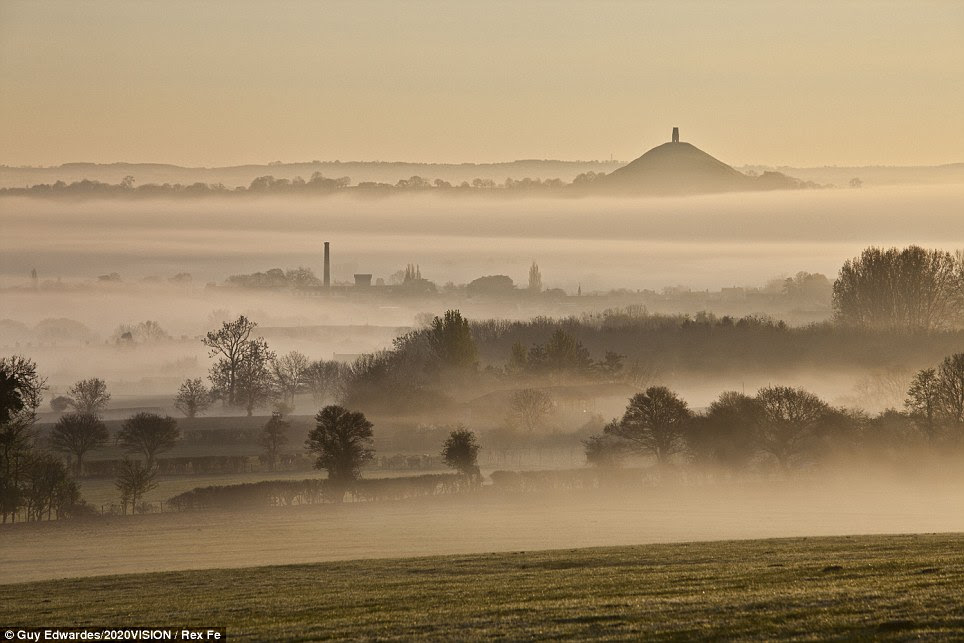 Mists and mellow fruitfulness: The hazy hills around Glastonbury Tor in Somerset 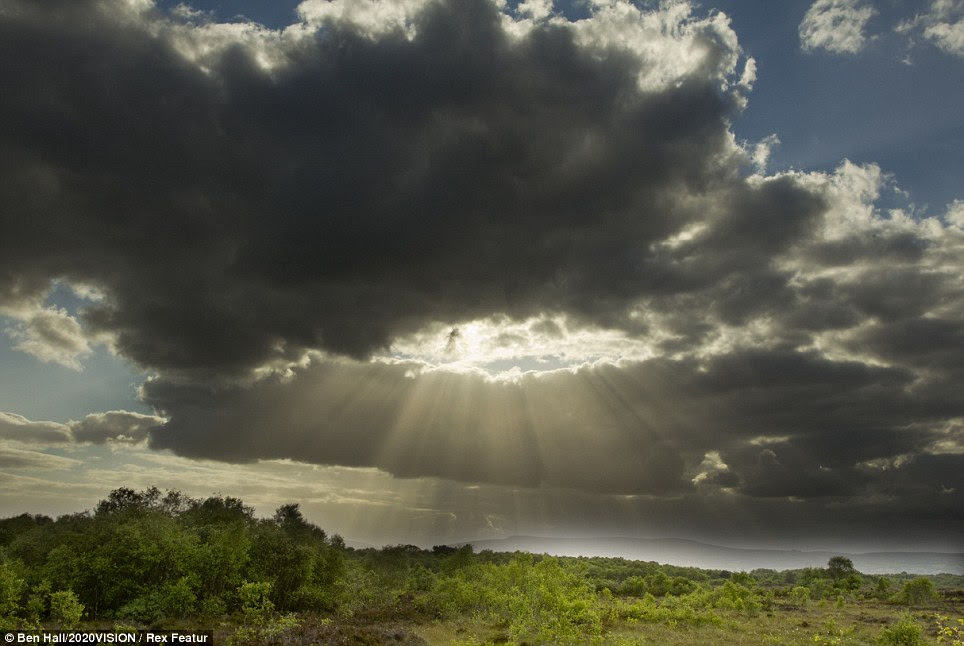 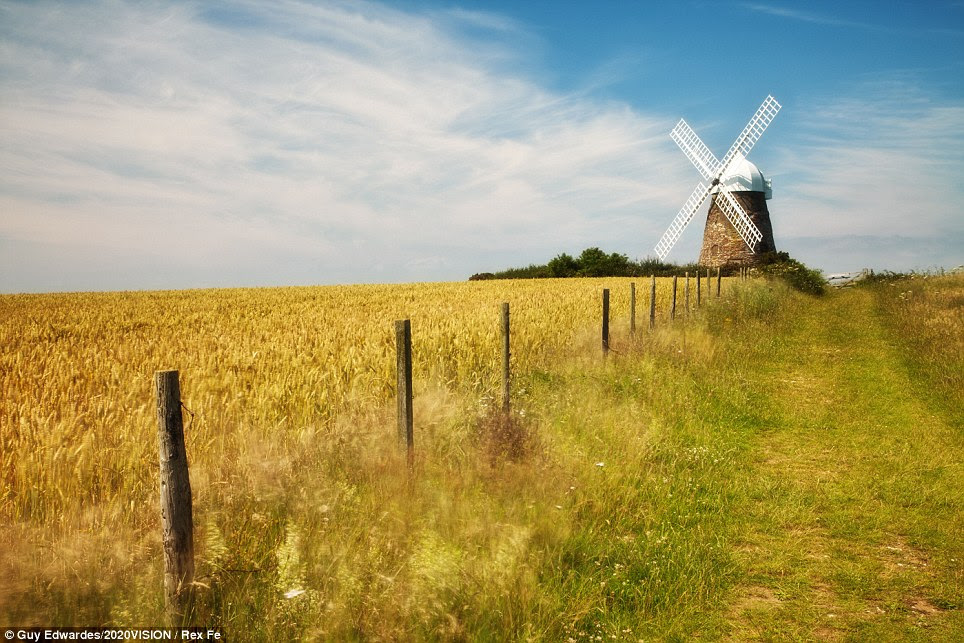 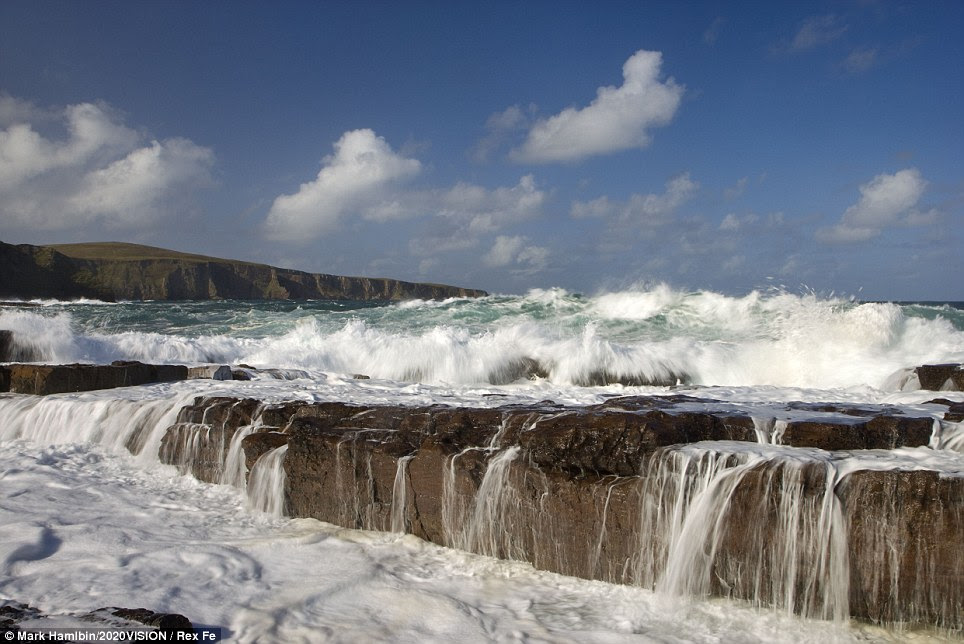 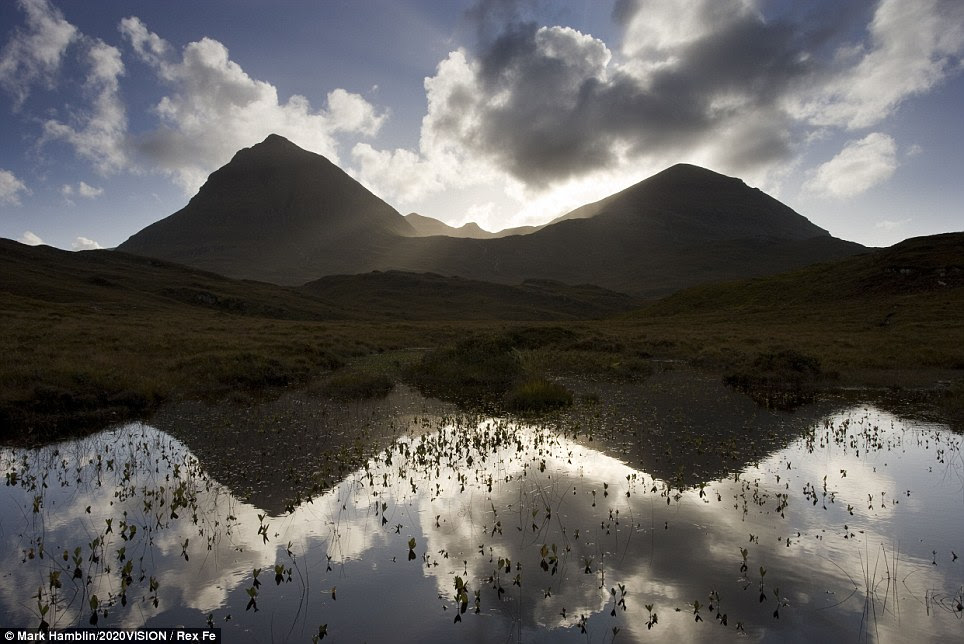 A moorlandd pool in the Assynt Mountains and the Scottish Highlands Mystical: The view over Butermere in the Lake District at dusk 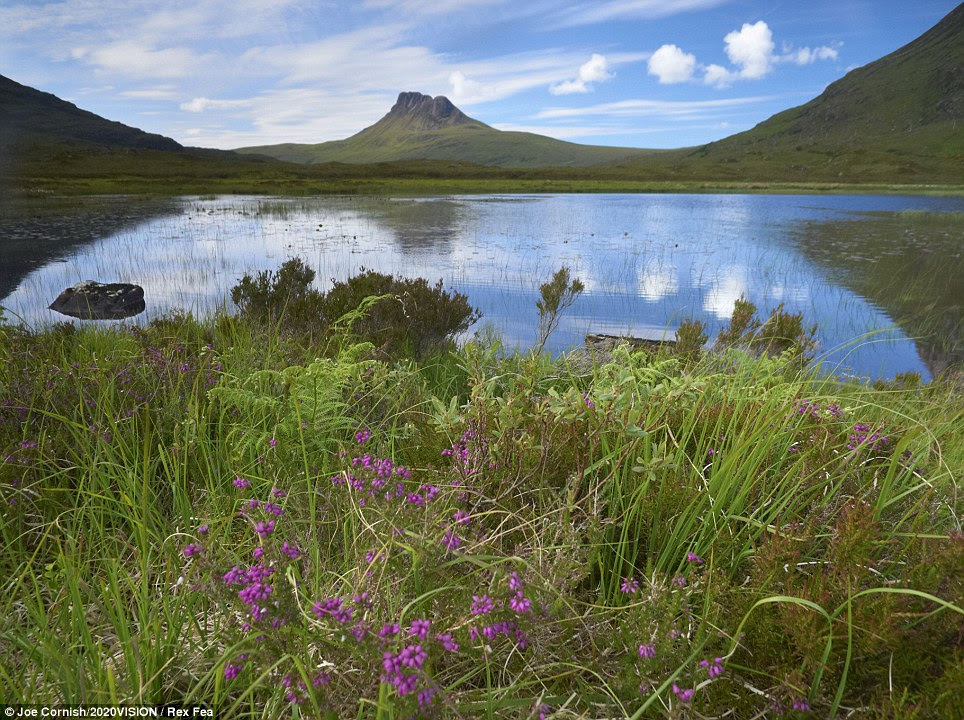 Eye-catching: A flower-filled meadow and pool near Stac Colgach in Sutherland 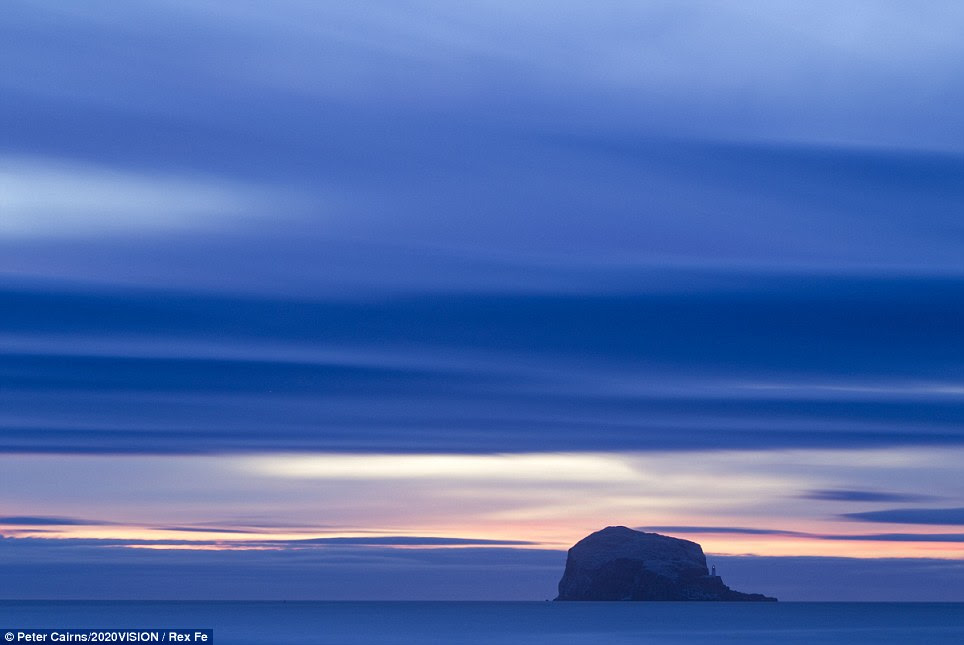 Dawn awakening: The start of the day at Bass Rock in the Firth of Forth 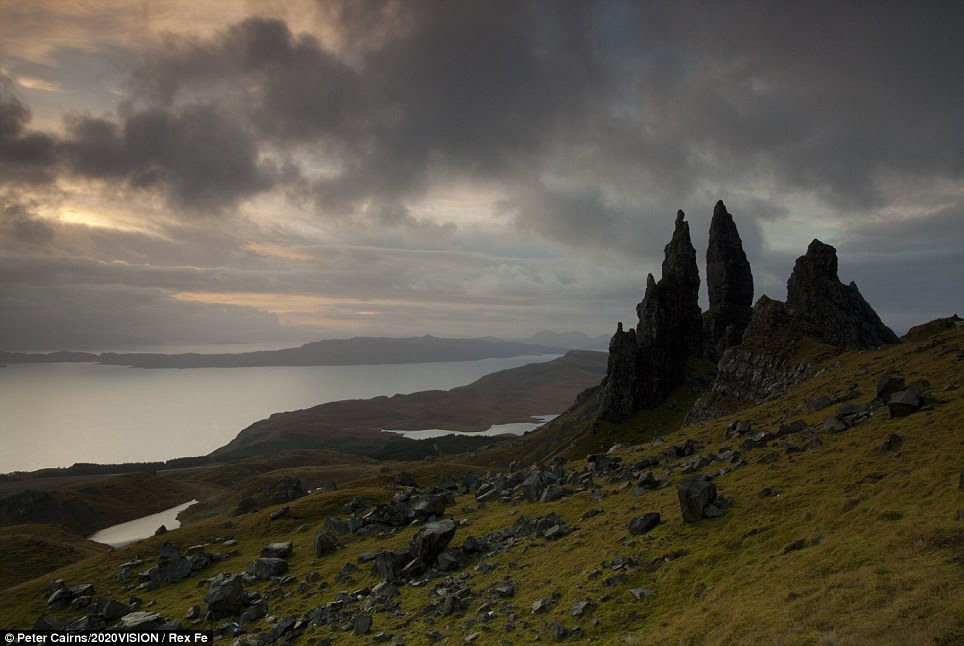 Rugged beauty: The Old Man of Storr at dawn on the Isle of Skye 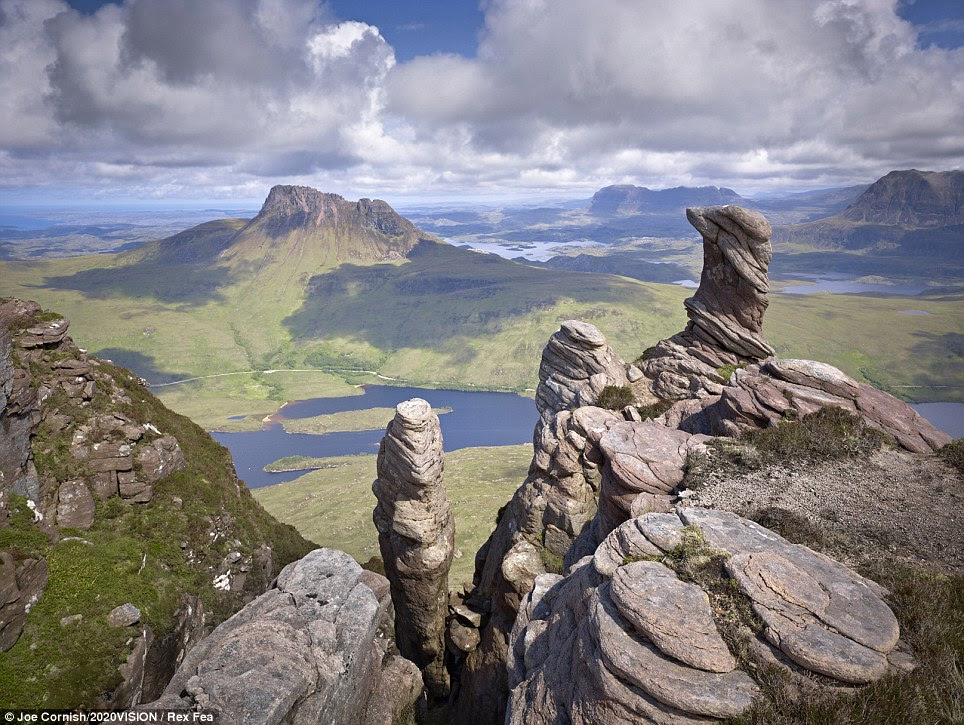 Top of the world: The impressive view from the summit of Sgorr Tuath in the Assynt mountains 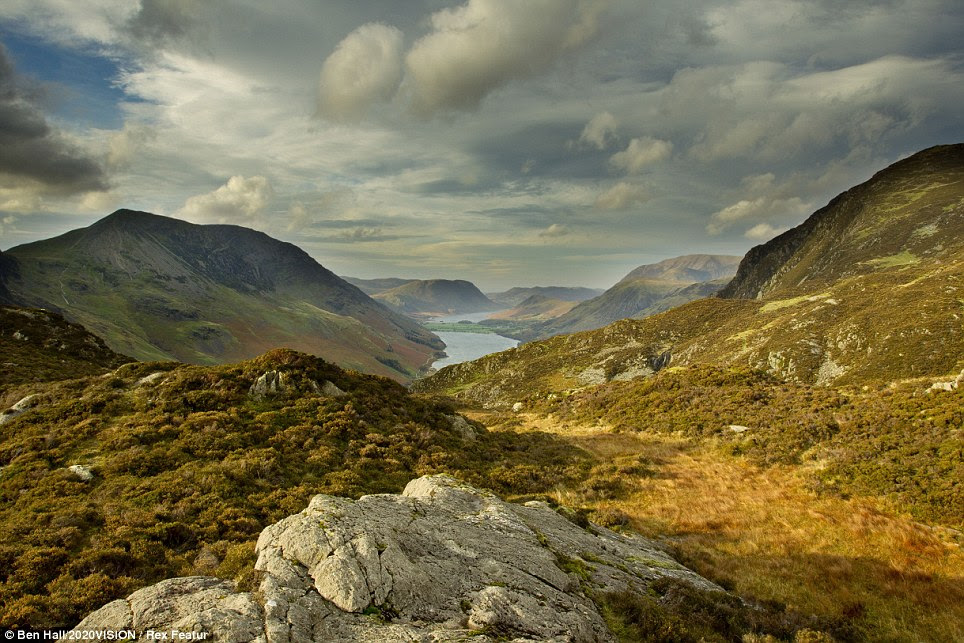 Wild and wonderful: The view from Blackbeck Tarn towards Buttermere in the Lake District National Park in Cumbria 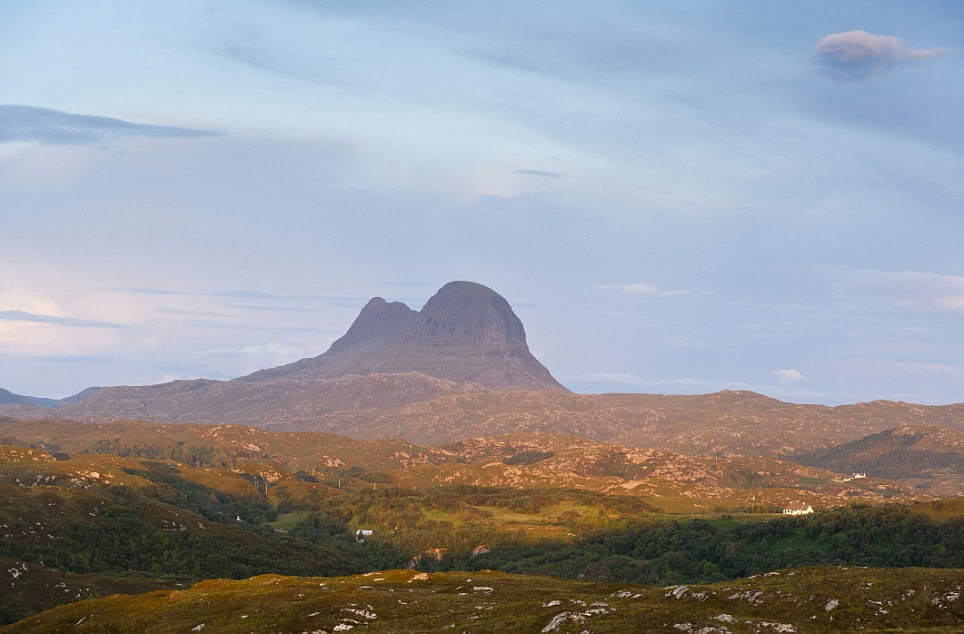 Stark: The Suilven mountain viewed from near Lochinver in Sutherland 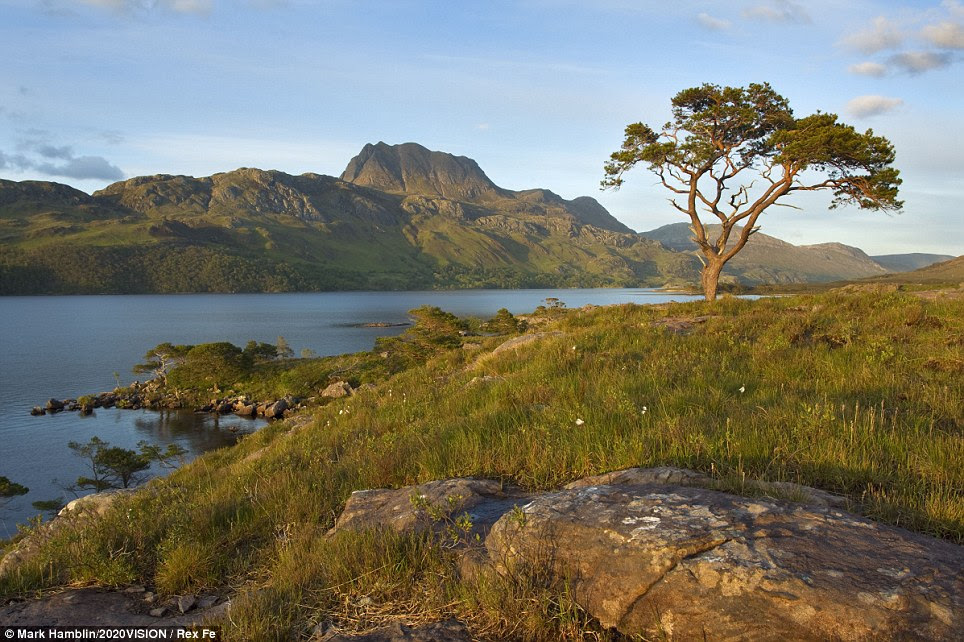 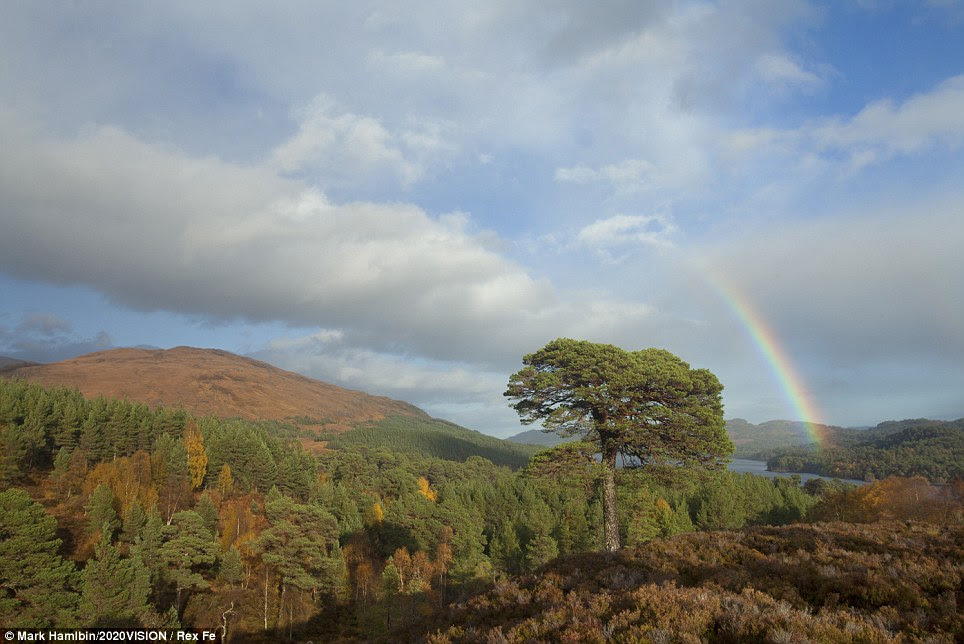 Colourful: A rainbow lights up the sky surrounding Glen Affric in the Scottish Highlands 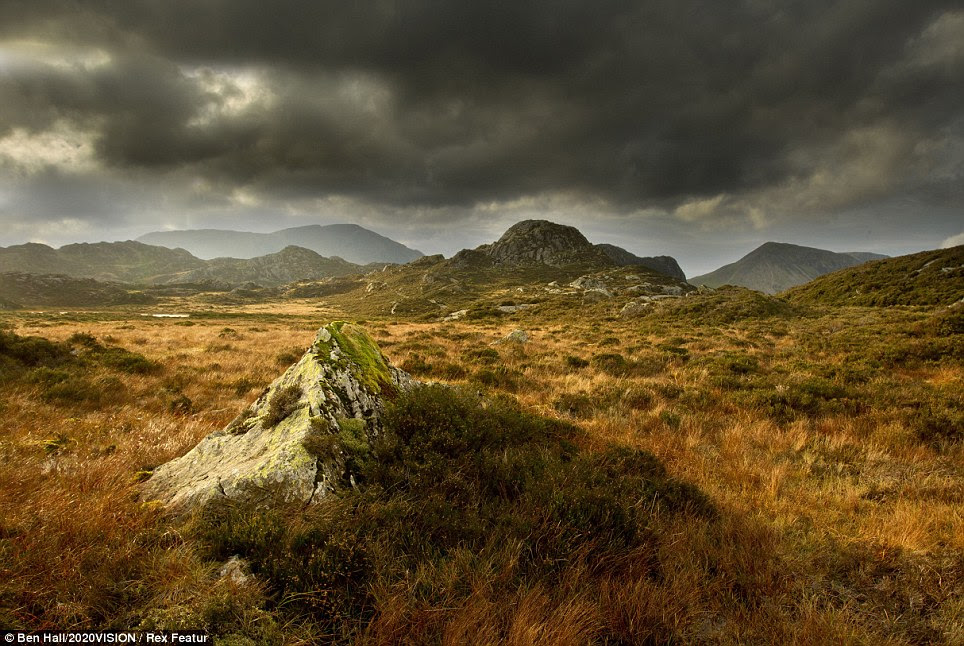 Foreboding: Dark clouds surround the hills of the Lake District

Misty mountains: A panoramic view of a shimmering Loch Leven in Glencoe village near Fort William, Highland region of Scotland 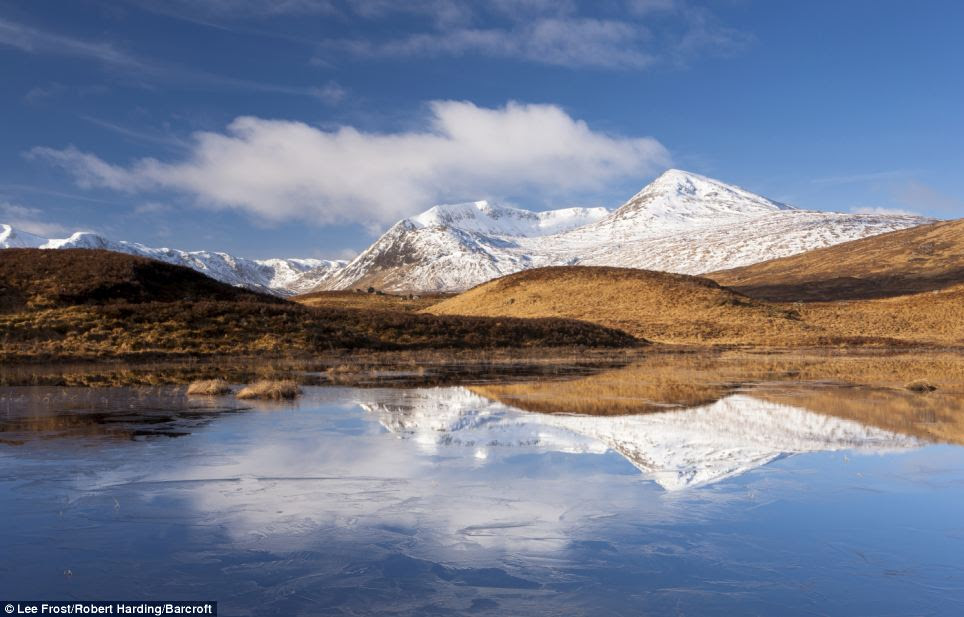 Caught in time: Black Mount Hills covered in brilliant white snow on a sunny winter's day and mirrored in a frozen Lochain

One atmospheric picture shows mist rolling in over Loch Leven near Glencoe village in the wild Scottish Highlands.
Another shows the plunging V-shape of Loch Achtriochtan and its mirror image as it plummets towards the lake.
The imposing Black Mountains are seen still capped in snow on a sunny winter's day and reflected in the glittering frozen Lochain below.

Awe-inspiring view: Loch Ba' rises up in the distance behind the rolling clouds over Rannoch Moor
The grand slope of Lochan na h-Achlaise glows in a soft light above the craggy Rannoch Moor, while a more gentle scene captures the blues of an early morning in Grasmere near Ambleside at Cumbria's Lake District.
Once home to many of the Lakeland poets, the area has a rich history that is still honoured today by captivated artists, writers and craftspeople.

Twice the fun: This amazing panoramic view of Loch Leven reveals detailed reflections of distant mountains including Pap of Glencoe and scudding clouds

Pretty as a painting: Reeds poke out of the still water at Lochan na h'Achlaise among Black Mount Hills of Rannoch Moor
'The scale of the landscape is also awe-inspiring, while wild weather brings out the drama and character of the scenery.
'I’ve explored and photographed the Highlands in all seasons and it remains a constant source of inspiration – nature in its raw state.'
Incredibly, many of the pictures were taken using the pre-digital technique of physical transparencies.

Postcard view: A panoramic landscape picture taken at Ullwaters, in the Lake District

Snapshot of history: Alnwick Castle in the distance against shimmering water in
Posted by ASC at 1:29 PM