A MOBILE BASE FOR FLYING AIRCRAFT CARRIERS; ANOTHER USE FOR US Navy's floating fortress. DUAL PURPOSE FOR A FIGHTING SHIP A STRIKE FORCE NON PAR

To extend beyond the time and distance of operation beyond the 7000 kilometers limitation of flying aircraft carriers, the present giant contingent can be put to use.

The Concept Of The Future Fleet

The role of maritime theater of operations has significantly increased. But to create a traditional fleet of aircraft carriers, cruisers and destroyers, capable of competing on an even level with the strongest fleet today, the US Navy, is extremely complicated. For this reason, the maritime powers are looking for asymmetrical approaches in the construction of the fleet of the future.
An interesting asymmetrical solution is presented by the Ekranoplan.

Ekranoplan is a high-speed transport vehicle flying within the limits of the aerodynamic envelope, at a relatively low altitude (a few metres) above water, ground, snow or ice. The ekranoplan is much smaller than an aeroplane with comparable mass and wing area. According to the International Maritime Organisation (IMO) classification it is considered a sea-going vessel.


President Trump's 97,000-ton aircraft carrier has dropped anchor in the Solent, ahead of a two-week US and UK training exercise in the North Atlantic, during a break from deployment in the fight against ISIS.
The George H.W. Bush carrier arrived this morning, dropping anchor near Stokes Bay, between Portsmouth and the Isle of Wight, as a modern day warship met the old defences of the south coast.
The £4.7billion ($6.2billion) supercarrier, named after the 41st President, is a Nimitz-class ship, measuring 1,092ft long and has a crew of 5,500 personnel.
It carries 80 or more combat aircraft on a 4.5-acre flight deck, that towers 20 storeys above the waterline.
The modern day carrier, which has played a role in training British personnel before they man the HMS Queen Elizabeth, came face to face with the Victorian sea forts, still out in the waters near Gosport.  The forts in the Solent were designed to keep invaders at bay in the 19th century and were built in 1861.
The huge warship has been deployed in operation Inherent Resolve, the fight against ISIS, and its main role has been to provide a base for the airstrikes against the terror group.

Couple impressively ski then base jump from a mountain

Police drag disabled man out of wheelchair outside fracki…

A runaway tyre on motorway foils police trying to stop it 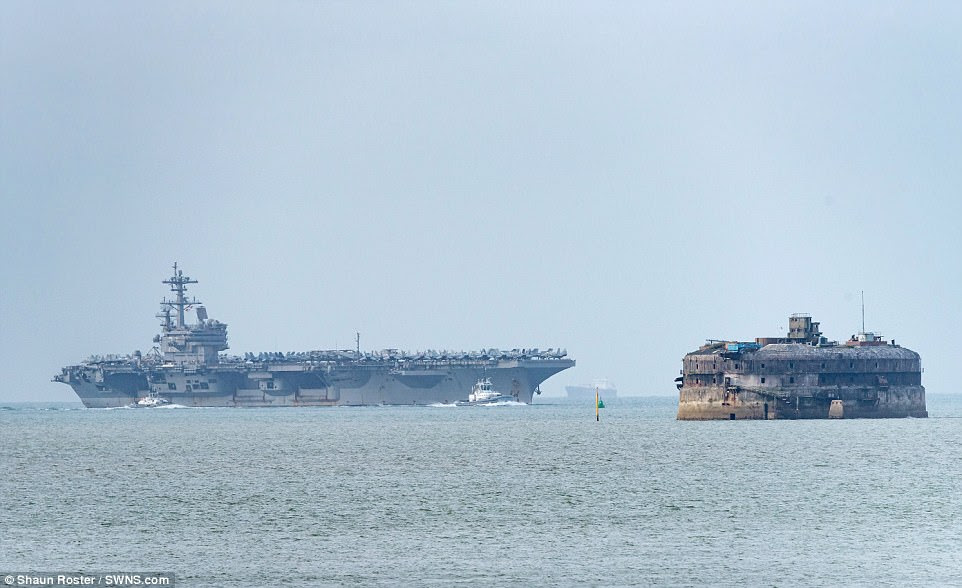 +23
USS George Bush Aircraft Carrier laden with fighter jets arriving in the Solent, UK, early this morning. The ship has been a major part of the fight against ISIS and will be the centre of two-weeks of maritime development between the US and the UK 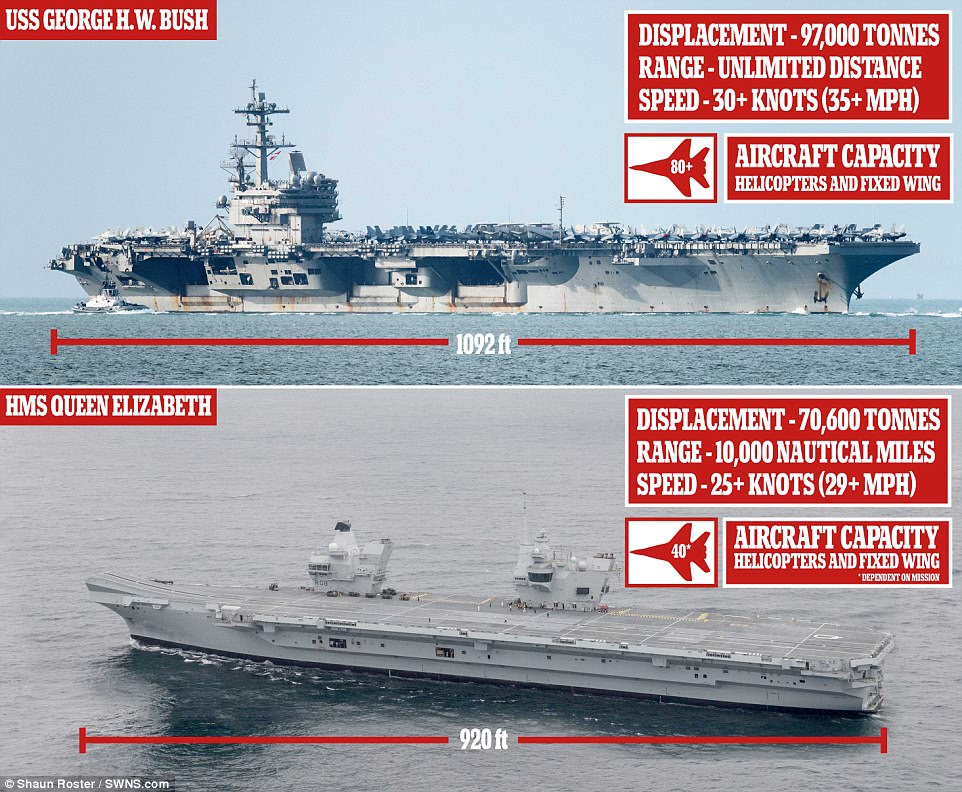 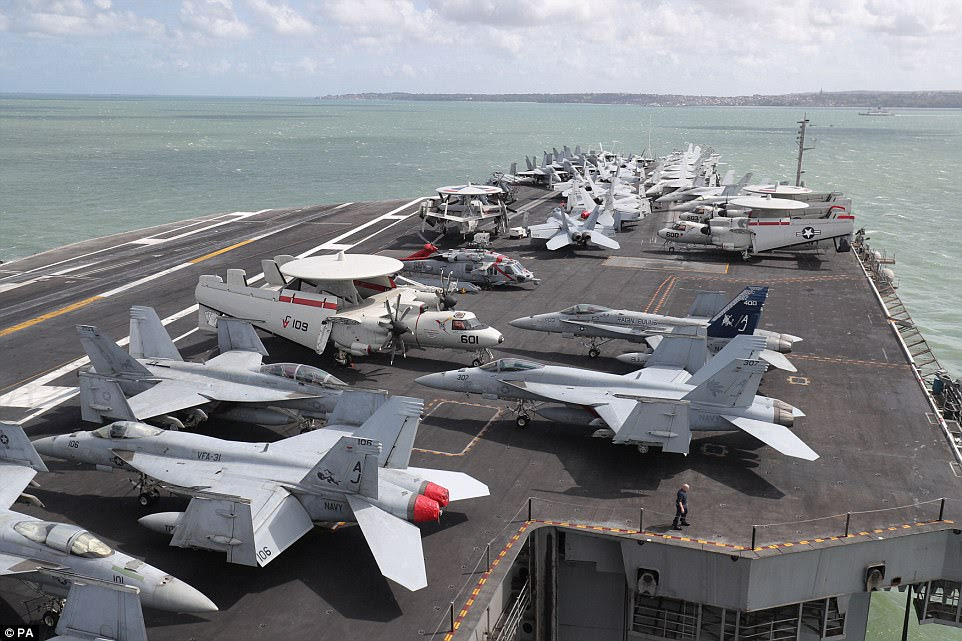 +23
Planes on the flightdeck onboard the US Navy Nimitz-class aircraft carrier USS George H.W. Bush as it lays at anchor off the coastbefore it participates n Exercise Saxon Warrior 2017 in the Northern Atlantic Ocean 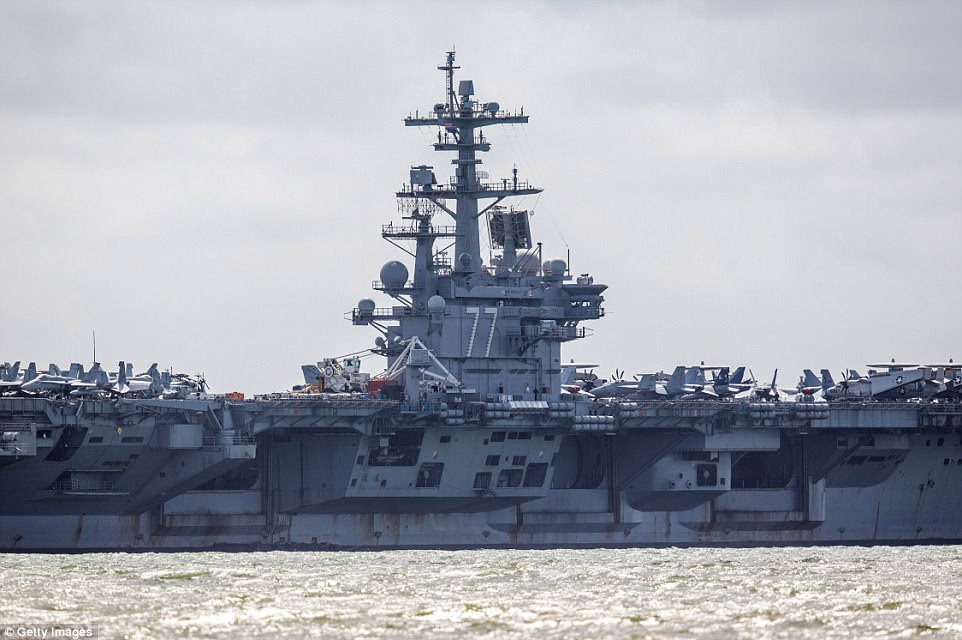 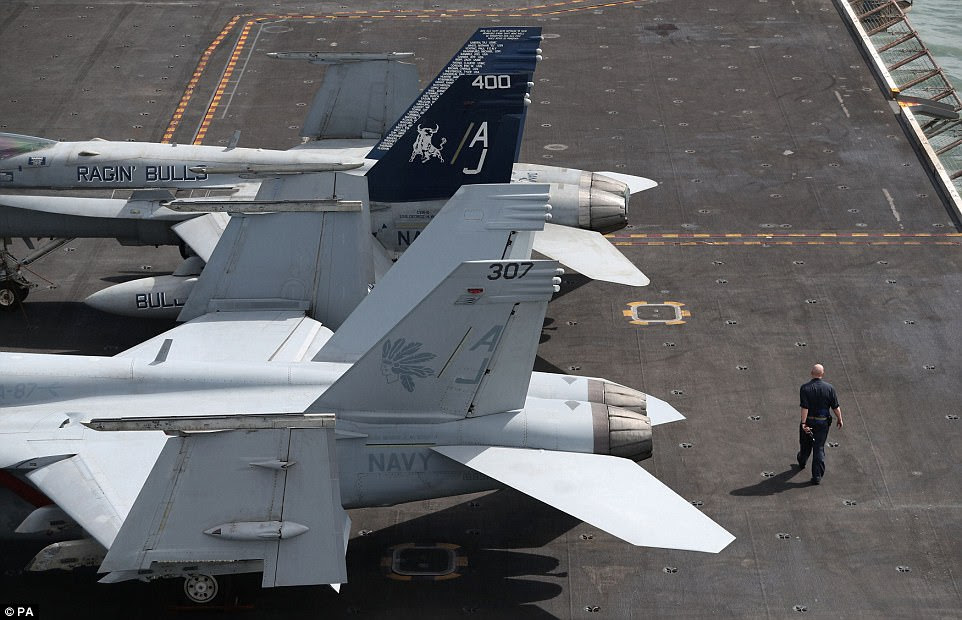 +23
A crew member walks past 2 F-18 jets, one of which says 'Ragin' Bulls' etched on the side, onboard the USS George H.W. Bush earlier this afternoon 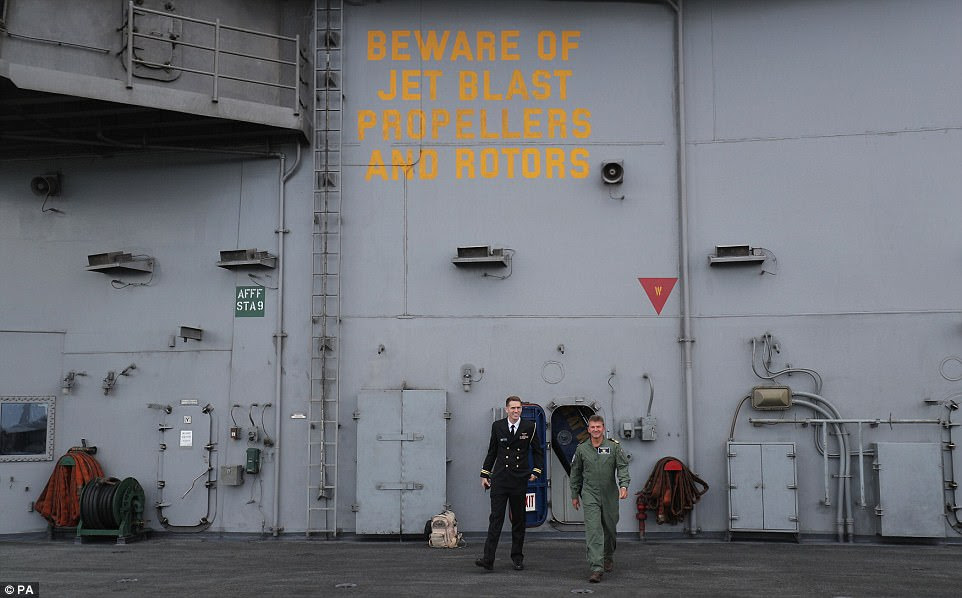 +23
Commodore Andrew Betton (right) walks out on to the USS George H.W. Bush with a member of the crew before speaking to members of the media 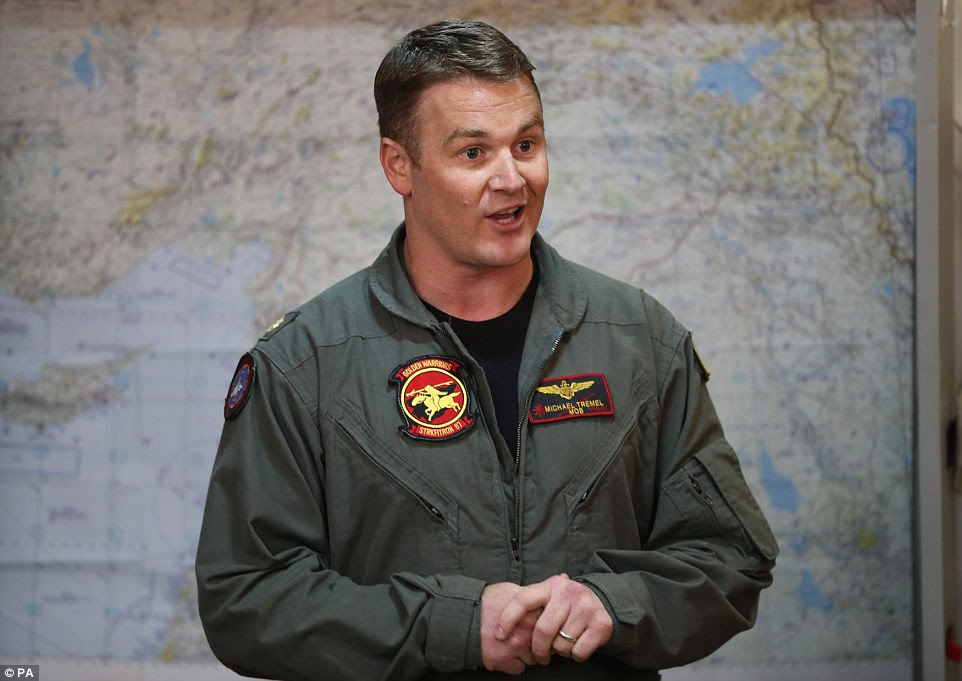 +23
Pilot Michael Tremel chats with members of the media earlier this afternoon onboard the US Navy Nimitz-class aircraft carrier USS George H.W. Bush

THE USS GEORGE HW BUSH v THE HMS QUEEN ELIZABETH: HOW DO THEY COMPARE?

Type: Nimitz-class
Weight: 97,000 tons
Length: 1,092 feet
Height: 20 storeys above waterline
Capacity: 70-90 aircraft, plus 5,500 personnel across a 4.5-acre deck
Power source: two nuclear reactors, that can keep it running for 20 years
Cost: £4.7bn ($62.bn)
Type: Queen Elizabeth-class
Weight: 70,600 tons
Length: 918 ft
Height: Around 13 storeys above waterline
Capacity: 50-70 aircraft, around 1,600 personnel
Power source: gas turbine alternators and diesel engines
Cost: £3.1bn
According to Naval Today, the USS George H.W. Bush was accompanied by the USS Philippine Sea, USS Donald Cook and Norwegian ship HNoMS Helge Insgstad.
It is on its final leg of deployment in an operation against ISIS.
The carrier is being manned by UK personnel, as part of the UK-US Long Lead Specialist Skills Programme that then qualifies them in US carrier operations, as part of the preparation for the arrival of HMS Queen Elizabeth.
The Exercise Saxon Warrior 17 is a joint UK and US two-week major drill that will focus on how the countries work together.
Commander UK Carrier Strike Group Commodore Andrew Betton said: 'Exercise Saxon Warrior is a large, multinational joint exercise which involves fifteen warships from five different nations, submarines, over 100 aircraft and about 9,000 personnel.
'The UK contribution will be two Type 23 frigates supporting the US aircraft carrier, a Royal Navy submarine, the Carrier Strike Group UK battle staff, fixed wing and rotary wing aircraft operating from ashore, and then the central training staff who will based in Faslane in Scotland.' 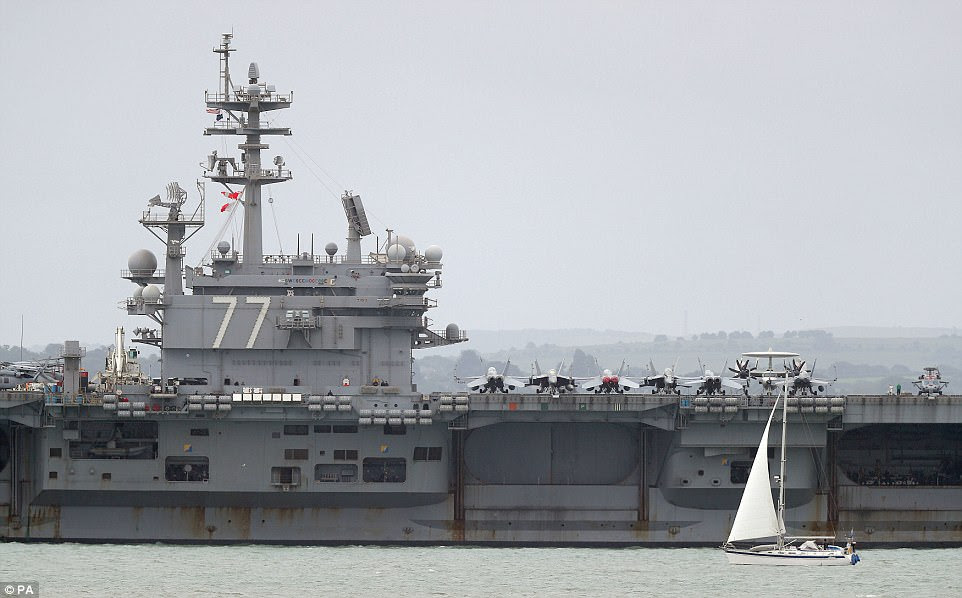 +23
A sailing boat passes the US Navy Nimitz-class aircraft carrier USS George H.W. Bush as it lays at anchor off the coast before it participates in Exercise Saxon Warrior 2017 in the Northern Atlantic Ocean

+23
The UECC car transporter ship Auto Eco passes the US Navy Nimitz-class aircraft carrier on Thursday morning in the Solent
The exercise, which begins once the group leaves Portsmouth, will also be key to ensuring UK personnel are fully equipped ahead of the arrival of the Royal Navy’s new Queen Elizabeth-class aircraft carrier, HMS Queen Elizabeth.
Over the next fortnight U.S. Naval personnel will train side-by-side with UK pilots, engineers and deck handlers to build combined maritime and aviation capability and capacity.
Colonel Phil Kelly, Royal Marines is the COMUKCSG Strike Commander. He said: 'This exercise is a great demonstration of the UK’s relationship with the United States who are helping us in getting back our carrier strike capability and making a success of the Queen Elizabeth aircraft carrier programme.' 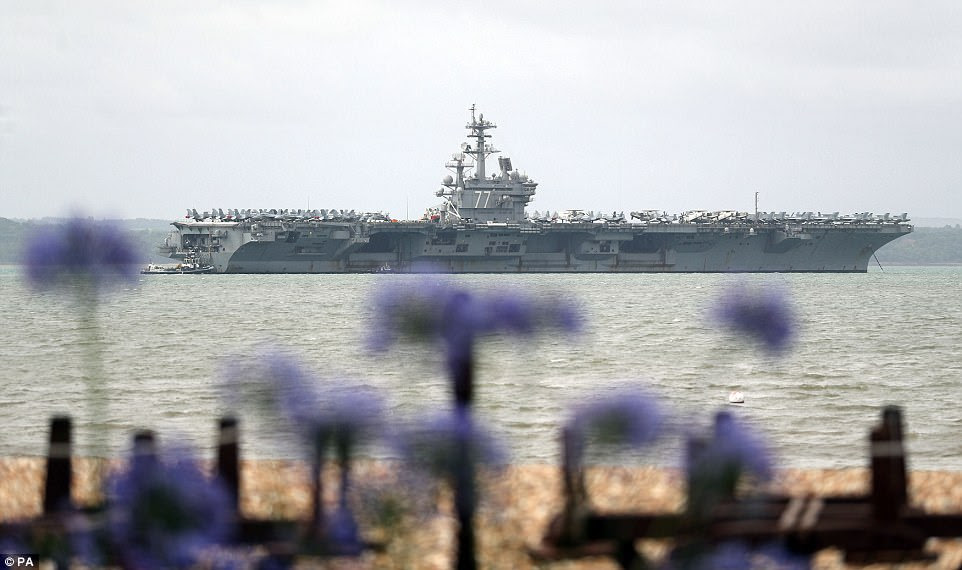 +23
Exercise Saxon Warrior is a U.S.-United Kingdom co-hosted, joint and multinational maritime exercise which the carrier will join 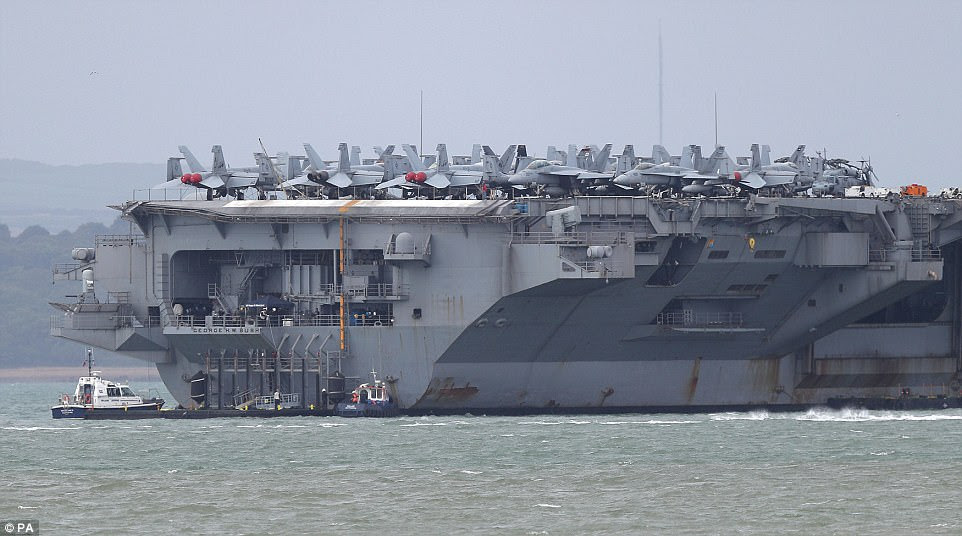 +23
Aircraft on the US Navy Nimitz-class aircraft carrier USS George H.W. Bush. The craft is being manned by UK personnel who are training ahead of the arrival of the HMS Queen Elizabeth 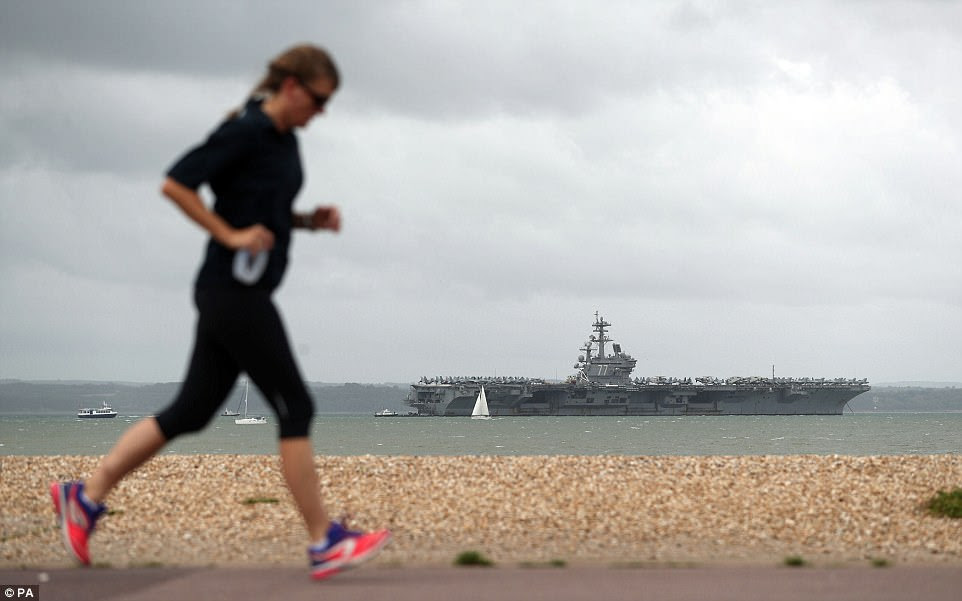 +23
A person runs along Pebble Beach in Stokes Bay, Hampshire, as the US Navy Nimitz-class aircraft carrier USS George H.W. Bush lays at anchor off the coast 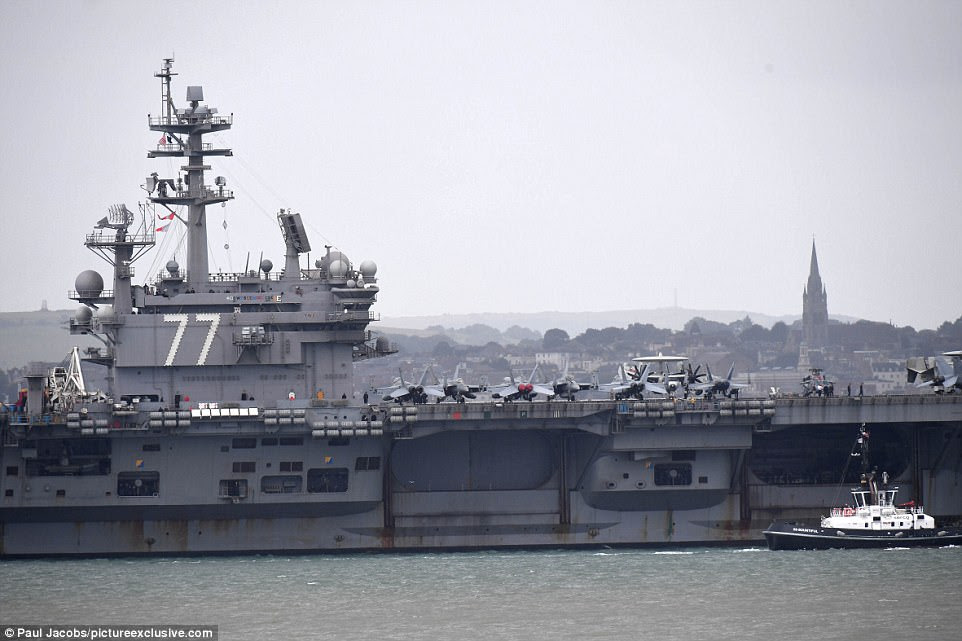 Commander UK Carrier Strike Group Commodore Andrew Betton is embarked with his team for the Exercise Saxon Warrior 2017.
The joint maritime exercise will focus how the US and the UK work together during a number of challenging scenarios around the UK coastline.
Cdre Betton said: 'Exercise Saxon Warrior is a large, multinational joint exercise which involves fifteen warships from five different nations, submarines, over 100 aircraft and about 9,000 personnel.'
It forms part of the training for those who will take on the HMS Queen Elizabeth when it comes into service. Powered by two nuclear reactors, it can operate for more than 20 years without refuelling and can reach speeds of 30+ knots (34.5+ miles per hour) with four bronze propellers, each 21 feet across and weighing more than 30 tonnes.
The huge carrier typically carries enough food and supplies to operate for 90 days, with 18,150 meals served everyday. It has distillation plants providing 400,000 gallons of fresh water from sea water daily, enough for 2,000 homes and has nearly 30,000 light fixtures.
Nuclear powered Nimitz carriers are named after Chester Nimitz, who was a fleet admiral in the US Navy in World War Two, playing a major role as the Commander in Chief of the Pacific Fleet. His forces inflicted a decisive defeat in Japan in the final phases of the war in the Pacific.
The USS George H.W. Bush has been a leading part of the US bombing campaign in Iraq and Syria, primarily against the Islamic State group but on occasion targeting Syrian government forces and their allies fighting US-backed groups.
The 330-metre ship carries between 70 and 90 aircraft at a time, including a fleet of F-18 fighter jets which are used to strike IS targets in Mosul, Raqa and elsewhere.

+23
The USS George H.W. Bush is powered by two nuclear reactors and can operate for more than 20 years without refuelling  reaching speeds of 30+ knots (34.5+ miles per hour) with four bronze propellers, each 21 feet across and weighing more than 30 tons 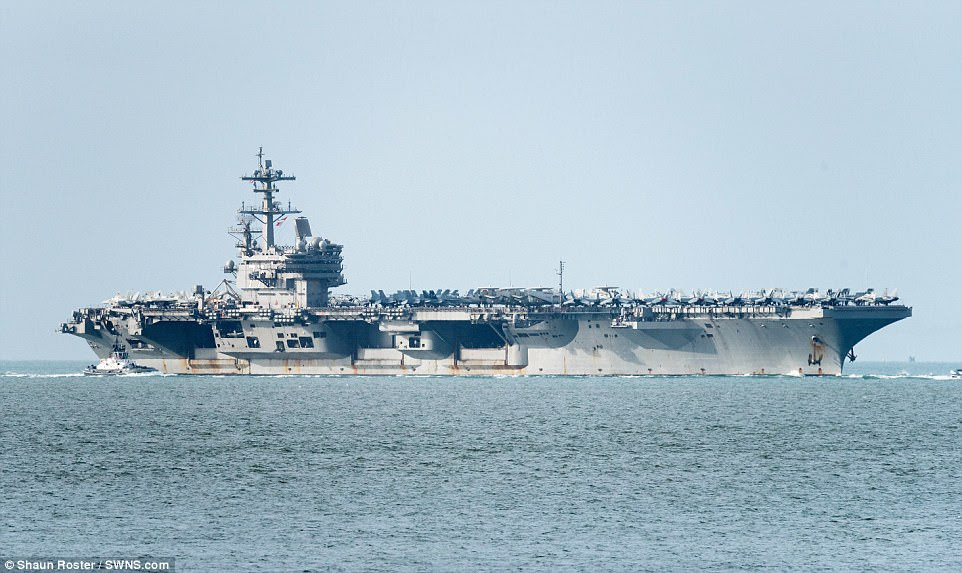 +23
The aircraft carrier typically carries enough food and supplies to operate for 90 days, 18,150 meals are served daily and has distillation plants providing 400,000 gallons of fresh water from sea water daily, enough for 2,000 homes 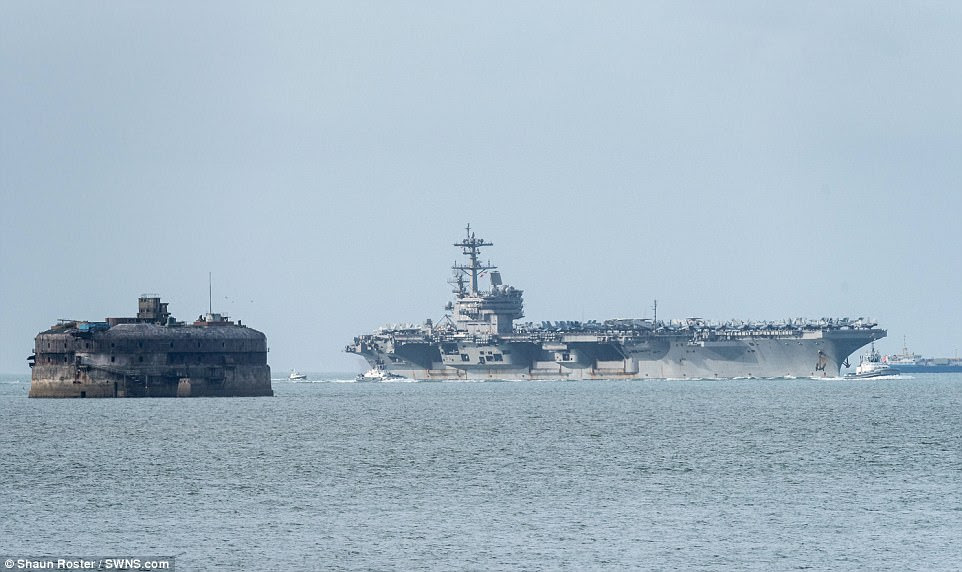 +23
The US and the UK will train side-by-side for the next two weeks, with a focus on how the two nations can work together on challenging maritime scenarios 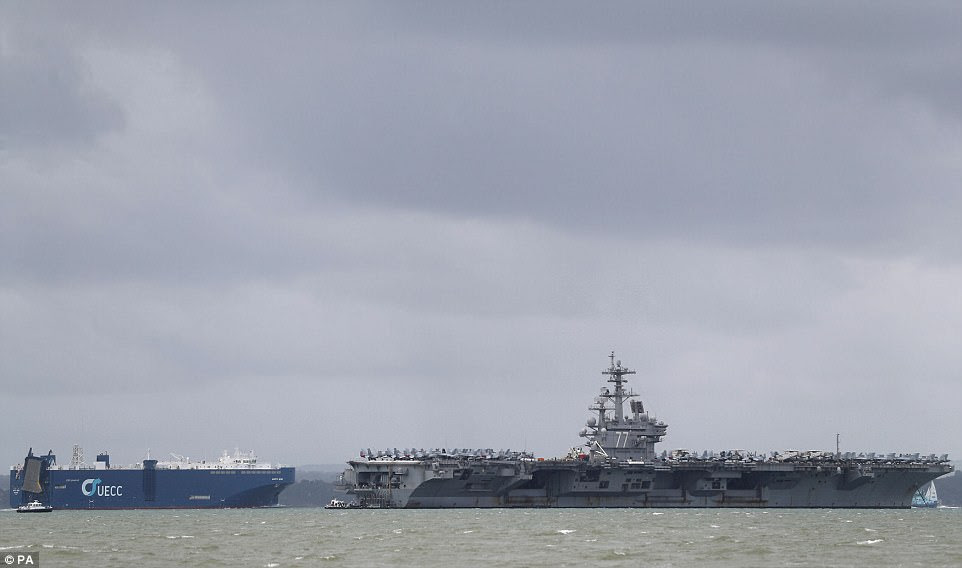 +23
As well as the USS George HW Bush, the USS Philippine Sea, USS Donald Cook and Norwegian ship HNoMS Helge Insgstad arrived in the Solent, as they complete the final leg of the deployment in the fight against ISIS 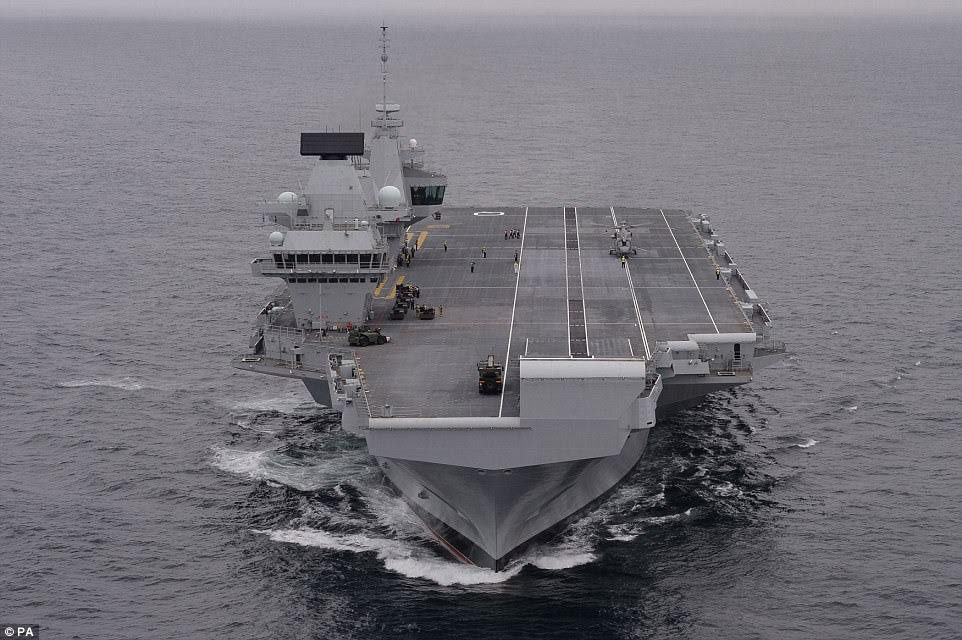 +23
The training will better equip UK personnel who will man the new HMS Queen Elizabeth, above, the Royal Navy's aircraft carrier 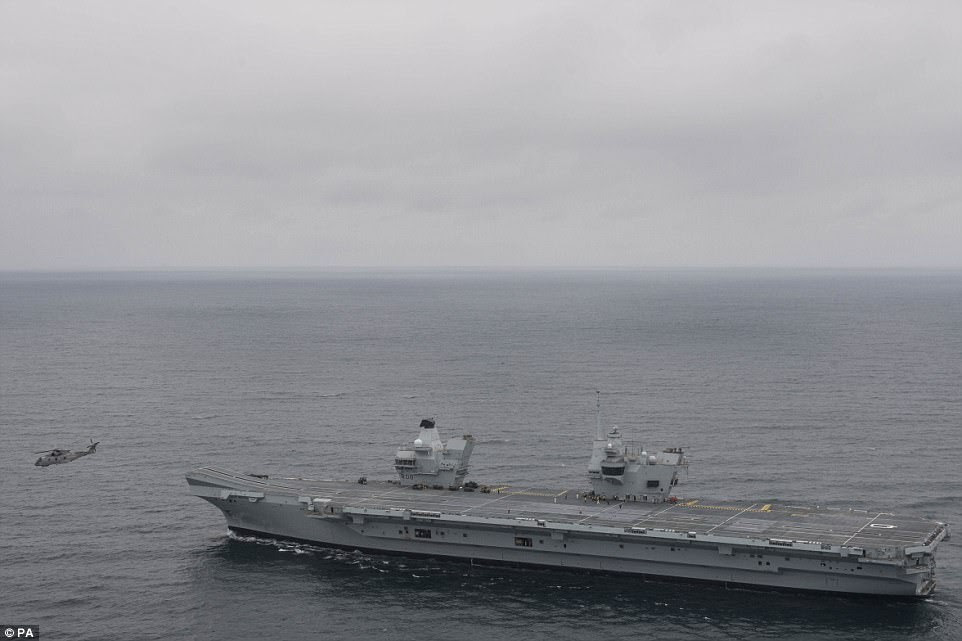 +23
The Royal Navy's carrier, the HMS Queen Elizabeth, above, left Lossiemouth at the beginning of the week for sea trials

As the condition of conducting amphibious operations is the conquest of the air and sea superiority in the landing area, assault ekranoplans do not require heavy armament. The need to lay down suppressive fire on the beaches can be satisfied by Multiple Launch Rocket System (MLRS). Given the likely volume of fire missions it is best to have on board 12 220mm rockets or 40 122mm rockets. With this equipment, the possible number of troops on board the ekranoplan of two to three hundred tonnes of displacement can be estimated at one company of infantry with standard weapons and equipment.
Posted by ASC at 1:24 PM