Is claim that divers found £100 BILLION of gold in Russian shipwreck a SCAM? South Korea probes whether investors are being misled as it emerges the same wreck has been 'discovered' three times

Doubt has emerged over a South Korean firm's claims to have found a £100billion treasure aboard a sunken ship amid government warnings that it could be a scam.
Shinil Group claimed to have discovered the wreck of Russian warship Dimitry Donskoi on Sunday and touted rumours that 200 tons of gold could be on board.
But after people began speculating on the stock market, South Korea's financial supervisory service warned it is looking for evidence of investors being misled.
Meanwhile it emerged that two other organisations 'discovered' the same wreck years before, including one which went bankrupt after being accused of spreading false rumours to bump up its stock price. 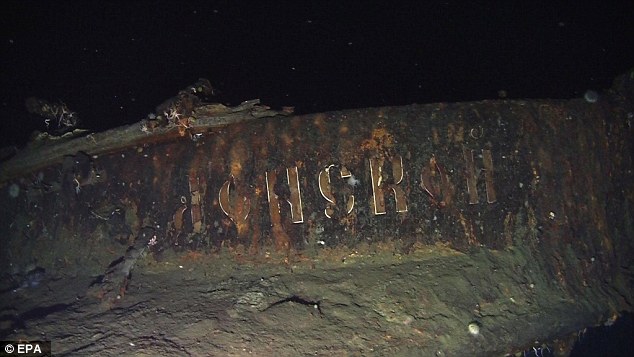 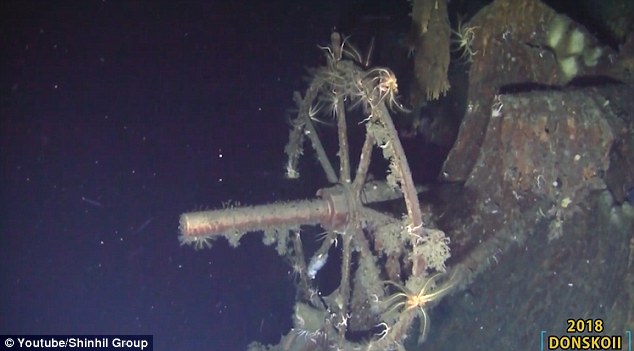 +6
But South Korea's financial watchdog has announced it is looking into whether investors are being misled about the find after stock began changing hands
Dong-Ah Construction claimed to have been the first to find the wreck in 2000 and also claimed there was a large supply of gold on board.
The announcement caused its share price to spike but it failed to provide evidence of the gold supply and made no attempt to raise the wreck before going under.
The government-funded Korea Institute of Ocean Science and Technology (KIOST) also told South Korean media that it had located the wreck in 2003.
Images from the company's website, posted in 2007, seem to show the same wreck at the bottom of the ocean, along with maps of its general location.
The institute has since accused Shinil of using its maps to 'discover' the wreck, raising doubts over who would hold rights to the treasure on board, if it even exists.
'A navy veteran and an expert in raising ships who had been a consultant while we were independently preparing to raise the Donskoi took the actual location data and the geological and marine information we had given him and joined the Shinil Group’s ship raising team.
'The result was that the Shinil Group was able to find in a matter of days what it took us years to discove,' a KIOST spokesman said, according to Korean news site Hani.
KIOST reportedly tried and failed to have the wreck raised, though it was not immediately clear why. 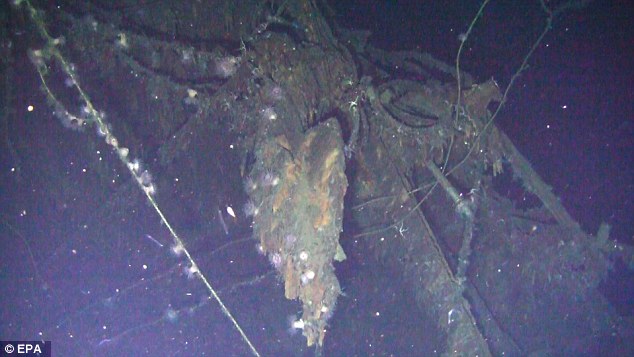 +6
Meanwhile it emerged that two organisations claimed to have found the wreck years ago, including one that went bankrupt after being accused of lying to inflate its stock price 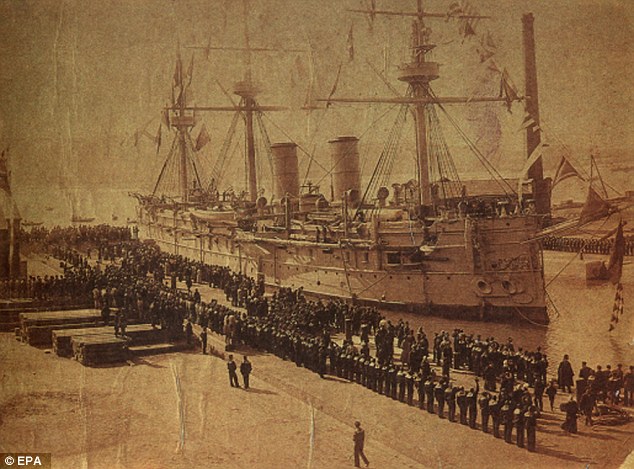 +6
Historians also poured scorn on claims the Donsoki (pictured) had huge stores of gold on board, saying it would be illogical to transport such wealth aboard a single warship
Shinil is an unlisted company founded on June 1, meaning investors cannot buy shares, though its president recently agreed to acquire shares in a local company, Jeil Steel.
After Shinil said it had found the ship, Jeil's stock prices rose by 30 per cent as investors speculated that it would be linked to the salvage operation.
The shares continued their steep rise morning before Jeil clarified that it has 'no relation to the treasure ship business', causing prices to drop more than 20 per cent.
South Korea's financial supervisory service subsequently warned that it will be keeping a close eye on trading around Jeil.
Regulators are looking out for evidence of deceptive practices including whether investors were being misled.
'Investors should beware because it's uncertain whether the ship is salvageable and whether Shinil would be able to gain ownership of the assets even if it gets permission to raise it,' said the official.
'Dong-Ah Construction made similar claims over the same ship but failed to deliver on its promises and went bankrupt, causing huge losses for investors.'
Shinil has also launched a cryptocurrency through its website, claiming to be using the ship as collateral.
But the currency advertises itself like a pyramid scheme, promising users 25 coins for joining the scheme and an additional 5 coins for each new investor the sign up.
There was no answer from the telephone number or email address listed on the cryptocurrency website when MailOnline tried to make contact.
The currency website also links to a second website for Shinil Group, though all of the links are under construction.
Wreck of Russian warship found, believed to hold gold worth $130 billion

Wreck of Russian warship found, believed to hold gold worth $130 billion
4:53 PM ET Wed, 18 July 2018 | 00:45
A South Korean salvage team has reportedly discovered the wreck of a Russian warship that is believed to still contain 200 tons of gold bullion and coins worth 150 trillion won ($130 billion).
The Russian Imperial Navy cruiser Dmitrii Donskoi, which was sunk in a naval battle 113 years ago, was discovered at a depth of more than 1,400 feet about one mile off the South Korean island of Ulleungdo, according to The Daily Telegraph.
The U.K. newspaper reported that a joint team made up of experts from South Korea, Britain and Canada discovered the wreck on Sunday. They had used two manned submersibles to capture footage of the vessel.
The images caught by the submersibles show “extensive damage to the vessel caused in an encounter with Japanese warships in May 1905, along with cannons and deck guns encrusted with marine growth, the anchor and the ship’s wheel,” the Telegraph reported.
There are reports that the Dmitrii Donskoi, which was scuttled during the Russo-Japanese war in 1905, went down with 5,500 boxes of gold bars and coins still in its holds to stop the Japanese seizing it.
The Seoul-based Shinil Group, which led the exploration that found the ship, hopes to raise it in October or November. It estimates the gold would have a value today of around $130 billion.
Half of any treasure found aboard the vessel would be handed over to the Russian government, the company said, while 10 percent of the remainder will be invested in tourism projects on Ulleungdo Island, including a museum dedicated to the vessel, The Daily Telegraph reported.
Posted by ASC at 3:15 PM