THE GUNS OF BATAN

A FUTURE STRATEGIC US MISSILE BASE GUARDING THE BASHI  CHANNEL

The Armed Forces of the Philippines Northern Luzon Command in 2016 has pushed for the establishment of a Naval Station on Mavulis Island to affirm the Philippines' sovereignty on the northernmost point of the archipelago. The Naval Stations was opened in 2019, with a fisherman's shelter completed in 2020 and turned over to the local municipality for maintenance and operation.[4][5]

On May 2021, the Department of Defense of the Philippines announced the electrification of the island through a solar power station, with a back-up diesel generator. This was done through the help of the One Meralco Foundation. The DND also announced the commissioning of a desalination plant to provide potable water to personnel assigned to the island. 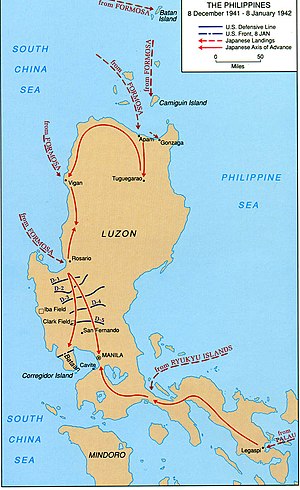 A map of Luzon Island showing Japanese landings and advances from 8 December 1941 to 8 January 1942.

The island is part of the Luzon Volcanic Arc, and is located 141 kilometers (88 mi) southeast of the southern tip of Taiwan's main island and 98 km to the nearest Taiwanese island, the "Lesser Orchid Island" . The distance to Luzon is 288 kilometers (179 mi). The island is 2.2 km long and up to a kilometer wide. The highest point, Y'Ami Hill, is 219 meters (719 ft) high. The island is rocky on the coasts but covered in lush vegetation, including mangrove, vuyavuy palms and other native shrubs. Coconut crabs are found on the island in large numbers.

China’s People’s Liberation Army (PLA) over the past four years has been stepping up the operational tempo of military exercises around two strategically pivotal waterways—the Bashi Channel and Miyako Strait—that guard the exit from or entry into the China Seas. The two waterways mark the rim of a chain of major archipelagos enclosing the East Asian coastline, beginning with the Kuril Islands off the coast of northern Japan all the way south to the Philippines and Borneo in the extreme southwestern part of the Pacific Ocean.

The Bashi Channel, connecting the South China Sea with the western Pacific Ocean, runs between the Philippines’ northern island of Luzon and the Taiwanese island of Orchid. The Miyako Strait runs between the Japanese islands of Miyako and Okinawa and provides a small passageway with international waters and airspace through Japan’s exclusive economic zone. Both waterways constitute principal entryway for the People’s Liberation Army Navy (PLAN) into the Pacific Ocean.

The past couple of month saw an array of PLA activities in, over, and near the two channels. In June, the Japan Air Self Defense Force (JASDF) had to scramble fighter jets to intercept a People’s Liberation Army Navy Air Force (PLANAF) Shaanxi Y-9JB (GX-8) electronic warfare and surveillance plane in the East China Sea crossing the Miyako Strait.

At the beginning of April, the PLANAF dispatched Xian H-6G maritime strike bombers and other aircraft through international airspace between the Japanese islands of Okinawa and Miyako skirting the the East China Sea. The month before in March, the PLAAF sent another long-range patrol that included four Xian H-6K long-range bombers, through the Miyako Strait. It rendezvoused with three PLAN ships–two Type 054A Jiangkai II-class guided-missile frigates and an oiler from the PLAN’s East Sea Fleet—for a military exercise.

Notably, the PLAAF and the Russian Air Force jointly conducted their first ever joint long-range aerial patrol in the East China Sea and Sea of Japan on July 23. According to the Japanese Ministry of Defense (MoD), the joint Sino-Russian mission included two Tu-95MS bombers flying through the Miyako Strait.

The PLAAF held its first-ever exercise in the Bashi Channel in March 2015, which was followed by a PLAN exercise in waters east of the Bashi Channel in June of the same year. It marked the beginning of PLAAF long-range strategic bomber flights in the Asia-Pacific region. 2015 marked also the time, when the PLA increased its military presence in the Miyako Strait. In 2016, the PLAN’s sole carrier strike group, consisting of the 60,000-ton Liaoning, a retrofitted Soviet-era Admiral Kuznetsov-class multirole aircraft carrier, and its escort vessels, for the first time entered the Western Pacific through the Miyako Strait before entering the South China Sea through the Bashi ChannelPolitically, the increased Chinese military presence on both locations is meant to send a deterrence message to Taiwan, Japan, and the United States and signal China’s resolve to defend its maritime territorial claims. Yet, why are the two water passages of military importance to the PLA?

The Miyako Strait and Bashi Channel are positioned along what military strategists refer to as the “first island chain”, stretching from the Japanese archipelago through Taiwan to the Philippines. Beginning in the 1980s, PLA strategists under the auspices of former PLA Navy commander and Central Military Commission Vice Chairman, Liu Huaqing, began emphasizing the strategic importance of the first island chain in overcoming China’s strategic encirclement by the United States and its regional allies.

“Chinese strategists see these passages as crucial to their ability to deploy forces beyond the first island chain,” Ben Lowsen, a specialist in Chinese political and security affairs working as a China advisor for the U.S. Air Force’s Checkmate office, told The Diplomat. “Some [Chinese] strategists even use an east-facing map with China at the bottom to show China as being encircled and needing to break out,” he added.

Furthermore, circumventing the first island chain is crucial to Chinese long-term plans for the PLAN to become a more expeditionary forces, a blue water navy, centered around carrier strike groups, regularly deploying to waters beyond the “near seas” of East Asia to, what the PLAN has referred to as the “far seas” beyond Asia as China’s maritime trade is expanding, which is dependent on sea-lane security.

The two waterways are first and foremost seen as the PLA’s most important outlets to the Pacific Ocean and consequently of pivotal importance for safeguarding Chinese economic interests abroad.

The first island chain is also crucial to understanding the importance of the two water passages in the event of a military conflict in East Asia.

According to Derek Grossman, senior defense analyst with the RAND Corporation, PLA and PLANAF flights over the Bashi Channel and Miyako Strait offer “offer Beijing opportunities to train under ‘realistic fighting conditions.’” He notes that fighting against the U.S. over Taiwan—the casus belli most often assumed to underlie a future U.S.-China War—or against Japan and the US as a result of the Senkaku/Diaoyu territorial disputes, or against the U.S. in the South China Sea, will require the PLA to project power beyond the first island chain to intercept U.S. military reinforcements.

“Even if not, adding the ability to break past the first island chain and outflank opponents—namely Taiwan and Japan—on their eastern seaboards, and to threaten Guam, offers China new dimensions of attack,” Grossman told The Diplomat. PLA doctrine reportedly mandates sealing off the Yellow Sea, South China Sea, and East China Sea from U.S. air and naval assets in the event of conflict, which would include making the two waterways impassable to U.S. and allied shipping.

At the same time, the two waterways could be used by the U.S. and its allies to bottle up Chinese military forces in the near seas. Here, the Miyako Strait, given the presence of active U.S. airbases in the area constitutes the bigger military problem for PLA war planners, further complicated by Japan’s efforts to boost its military presence along the islands dotting the East China Sea. For example, Japan has been deploying new anti-ship missile units on islands in Okinawa prefecture that can cover the can cover the entire Miyako Strait.

Notably, the PLA would not need to control the waterways physically to use them in conflict: they would just need to deny their use to others, which is why any military discussion of the two water passages is inevitably linked to China’s growing anti-access, area-denial (A2/AD) capabilities. While it is often assumed that as a result of these assets, China will be able to seal off the South and East China Seas in the event of war, a recent analysis by Stephen Biddle and Ivan Oelrich suggests otherwise. Noting the limitations of current and future Chinese A2/AD capabilities, they project that in a future U.S.-China war set 2040, “Far from becoming a Chinese lake, the air and ocean surface within the First Island Chain is more likely to become a wartime no-man’s land (or no-man’s-sea), wherein neither side enjoys assured freedom of movement.”

In the near term, the waterways will principally remain in the news as conduits for PLA air and naval assets. A 2018 Rand Corporation report, analyzing China’s long-range bomber flights, including in and around the Bashi Channel and Miyako Strait, notes that “Japanese interlocutors generally assess that bomber flights represent the next step in China’s attempts to assert sovereignty over the Diaoyu/Senkaku Islands and gain leverage in its dispute with Japan in the East China Sea while “Taiwanese interlocutors generally assess that PLAAF bomber flights are the product of a combination of developments in both China and the relationship across the Taiwan Strait.” They are principally used to intimidate Taiwan’s political leadership.

In 2019, there are also more immediate practical reasons for the PLAAF/PLANAF increasing flight operations around the Bashi Channel and Miyako Strait. “The PLA doesn’t really have many other places to train,” according to Grossmann. “Flying over the Himalayas doesn’t simulate the realistic air and maritime domain warfighting scenarios the PLA seeks to experience, nor does it adequately send the deterrence messaging China has deemed necessary.” What appears certain is that as China’s military modernization, particularly in the naval realm, continues, the strategic importance of the two passages is bound