Surging debt in China could cripple the world economy unless its Communist leaders take action now, the International Monetary Fund has warned.
Consumer, business and government debt has surged to around 240 per cent of the country's economy – sparking fears of a high-risk bubble which could burst at any moment.
The new Chinese middle class is a vital driver of global growth, and a financial crisis in the country could plunge the planet into a fresh recession, it is claimed.
Unchecked borrowing growth on the scale experienced in China has often led to a sudden collapse, the IMF said.

+2
Consumer, business and government debt has surged to 230% of China's economy – sparking fears of a high-risk bubble which could burst at any moment
'International experience suggests that China's credit growth is on a dangerous trajectory, with increasing risks of a disruptive adjustment and a marked growth slowdown,' researchers argued. 'Decisive policy action is needed to deflate the credit boom smoothly.'
The organisation claimed that annual growth has been propped up by free-and-easy lending to firms and families.
It said that without this debt-fuelled spending, the Chinese economy would have grown an average 5.3 per cent per year from 2012 to 2016. Instead, it typically grew by 7.3 per cent.
In a chilling echo of the West's own crisis a decade ago, which created space for the Chinese economy to become increasingly important, analysts have argued that banks were behind the problem by coming up with more creative ways to make money.
In the US and Europe, this led to disaster when highly complicated bundles of debt, which few people understood, were underpinned by worthless mortgages.
'Complex and primarily short-term funding structures underpinning rapid credit growth are a key vulnerability,' the analysts said.
They added: 'Banks' rapid asset expansion has relied on increasingly complex funding structures, extending beyond deposit funding to interbank markets and wealth management products, and via complex and interlinked networks of entities.
'Complex funding structures and sizable, opaque off-balance sheet investments suggest that a deleveraging process in the financial sector could be bumpy.'
The authorities in China are seeking to double the size of its economy between 2010 and 2020, and accept debt will play a key role.
Chinese borrowing has quadrupled since the crisis and hit £22trillion at the end of last year – bigger than the annual output of the UK, US, France and Germany combined.
According to the Washington-based IMF, the nation's debt pile will be more than 290 per cent of the size of its economy in 2022.
It also warned that the nation's expansion was underpinned by government spending on infrastructure and a willingness to allow state-controlled banks to lend cash for property developments. Neither has historically been sustainable.
Not only that, but debt is doing less to boost growth, with three times as much credit needed now as in 2008 to achieve the same expansion.

China's government debt is growing as a percentage of GDP, according to figures from the IMF
In the last ten years, the private sector debt – excluding government spending – has climbed by 80 points to 175 per cent of economic output.
The IMF said: 'Such large increases have, internationally, been associated with sharp growth slowdowns and often financial crises.'
China's IMF representative Jin Zhongxia rejected the organisation's claims, saying: 'The stronger performance of the Chinese economy... was not merely driven by policy stimulus but is rather a reflection of rebalancing and structural adjustment.
The scenario of an abrupt slowdown in the Chinese economy is highly unlikely.'

Is China’s Yield Curve Signaling A Further Economic Slowdown?
In the bond market, an inverted yield curve has often predicted recession in developed economies. So what does the recent inversion of the yield curve in China say about the country’s economic outlook?
Since 2005, the yield on the 10-year Chinese government bond (CGB) has exceeded the one-year CGB yield by an average of 100 basis points (bps). An upward-sloping yield curve of this sort is normal in the $3.5 trillion CGB market and, as in most countries, reflects expectations for future policy rates, a term premium and healthy market supply-demand dynamics.
But on 7 June, the 10-year CGB yield sank below the one-year yield. This yield curve inversion has occurred only once before, in June 2013, amid a severe liquidity crunch in the interbank market.
What is causing the current yield-curve inversion? We see four main drivers:

What does the yield-curve inversion mean for the Chinese economy?
The PBOC has clearly tightened monetary conditions, pressuring banks to curb corporate and mortgage lending while passing through higher lending rates to borrowers. Chinese growth – particularly nominal growth – clearly peaked and should decelerate into 2018. Historically, a flattening and inverted yield curve has indicated weakening industrial production with a lag of five months, as shown in the chart below. 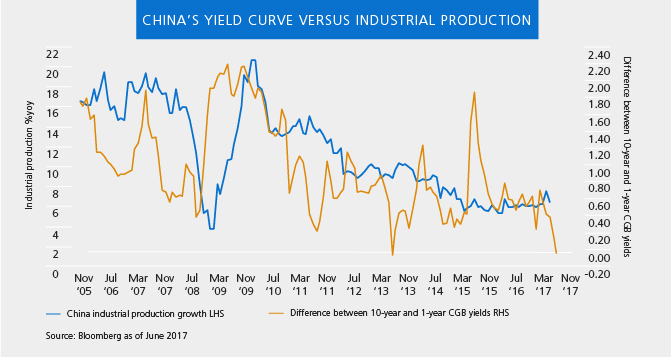 China’s reflation momentum is also turning. The surge in producer prices from upstream commodities faded during the second quarter, and tight liquidity is expected to weaken construction demand and create some destocking pressure, particularly in commodities such as iron ore.
On the margin, China’s monetary tightening and financial deleveraging will be a headwind to a rebound in global manufacturing and reflation in commodities.
For Chinese policymakers, maintaining macro stability, particularly financial stability, in the $10 trillion bond market is of paramount importance. A delicate balance needs to be maintained between curbing excess leverage and maintaining financial stability. A persistent wholesale funding squeeze and yield-curve inversion in a relatively opaque and interconnected financial system are signals of strain; they should be taken seriously by both policymakers and investors.
Posted by ASC at 9:42 PM