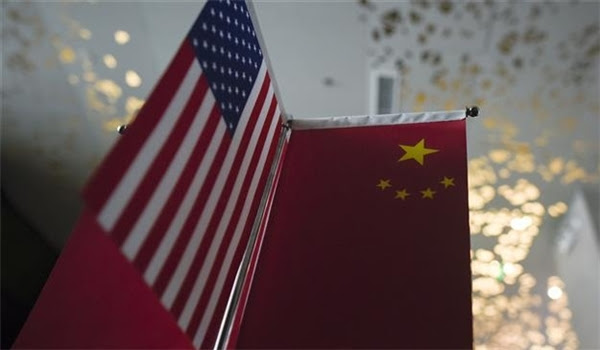 Washington formally launched a probe into China’s alleged theft of US intellectual property (IP), in a move likely to spark a trade war with Beijing which has vowed to take “all appropriate measures” in response to the move.
“On Monday, President Trump instructed me to look into Chinese laws, policies, and practices which may be harming American intellectual property rights, innovation, or technology development,” said US Trade Representative Robert Lighthizer in a statement posted on his official website, presstv reported.
“After consulting with stakeholders and other government agencies, I have determined that these critical issues merit a thorough investigation. I notified the President that today I am beginning an investigation under Section 301 of the Trade Act of 1974,” added the statement.
Beijing views the use of Section 301 as an act of aggression since it allows the US president to take action against the Chinese economy without consulting the World Trade Organization (WTO), which China joined as a member in 2001.
China has repeatedly warned Washington against bypassing the WTO since January. Its commerce ministry issued a statement on Tuesday expressing “serious concern” over Trump’s order to investigate US-China trade ties, insisting that the government would “definitely adopt all appropriate measures to vigorously defend the lawful rights and interest of China.”
“If the US side ignores the facts, and disrespects multilateral trade principles in taking actions that harms both sides’ trade interests, China will absolutely not sit by and watch, will inevitably adopt all appropriate measures, and resolutely safeguard China’s lawful rights,” the statement added.
Moreover, China’s Foreign Ministry spokesperson Hua Chunying insisted in a Thursday press conference that “Section 301 has been denounced by other nations for its unilateralism since it came out.”
“The US has made promises to the international society, noting that it will execute the section in a way that accords with WTO rules. The US should keep its promises and not become a destructive force that undermines multilateral rules,” she added.
“There is no winner in a trade war,” she further emphasized. “We hope the relevant people can refrain from dealing with a problem in the 21st century with a zero-sum mentality from the 19th or the 20th century.”
During the event for signing the probe order, Trump emphasized that “Washington will turn a blind eye no longer” to Beijing’s “theft” of US industrial secrets.
Some foreign-based corporations seeking a share of the vast Chinese market have complained that Beijing forces them to hand over technology as the price of doing business in China.
US administration officials have claimed that China’s “theft” of intellectual property could be worth as much as $600 billion.
Trump’s remarks came amid heightened tensions over North Korea in recent weeks and his criticism of China’s position in face of Pyongyang’s development and tests of ballistic missiles and nuclear weapons.
“Our foolish past leaders have allowed them to make hundreds of billions of dollars a year in trade, yet they do NOTHING for us with North Korea, just talk,” Trump said in a Twitter message last month.
Beijing, however, called on Washington not to politicize bilateral trade ties. It said its trade ties with the US and North Korea’s nuclear program are two unrelated issues and “should not be discussed together.”
According to a recent report of the US-based Institute of International Finance, “A trade war between US and China will hurt not only Chinese manufacturers, but also upstream suppliers and downstream distributors such as US retailers. Per China’s Ministry of Commerce, the final US retail price of imported Chinese goods can be several times of their imports prices.”
If China decides to retaliate against the US, the price of American goods will most likely increase and markets that were once open to the US may begin to shutter.

Trump orders review of China’s practices regarding intellectual property; Beijing warns it “will not sit idle” 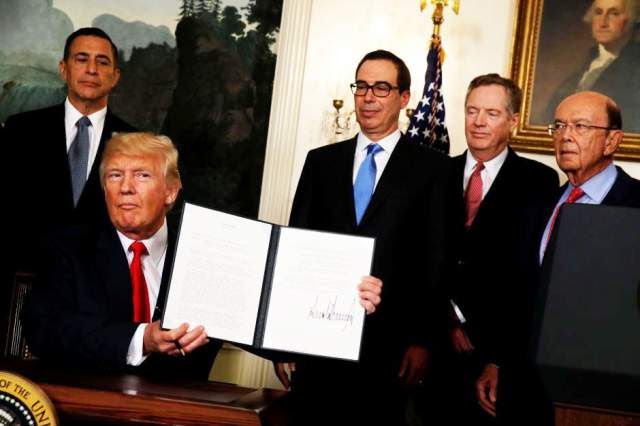 Trump returned to Washington to sign the order authorizing Trade Representative Robert Lighthizer to explore whether to undertake a Section 301 investigation.

Trump orders review of China’s practices regarding intellectual property; Beijing warns it “will not sit idle”


President Donald Trump has asked his country’s top trade official to review China’s practices regarding intellectual property. The move was incremental, but could eventually lead to the US imposing trade sanctions.


President Trump on Monday authorized an inquiry into whether to investigate China's alleged theft of American intellectual property, declaring it 'a very big move' while the country's largest business lobby group urged the two countries to resolve differences.
Trump broke from his 17-day vacation in New Jersey to return to Washington and sign a memorandum that instructs U.S. Trade Representative Robert Lighthizer to look into whether to investigate China's trade policies on intellectual property, which the White House says are harming U.S. businesses and jobs.
The inquiry, which U.S. administration officials say will take up to a year to complete, is likely to escalate tensions with Beijing at a time when Washington has asked for its help on North Korea. 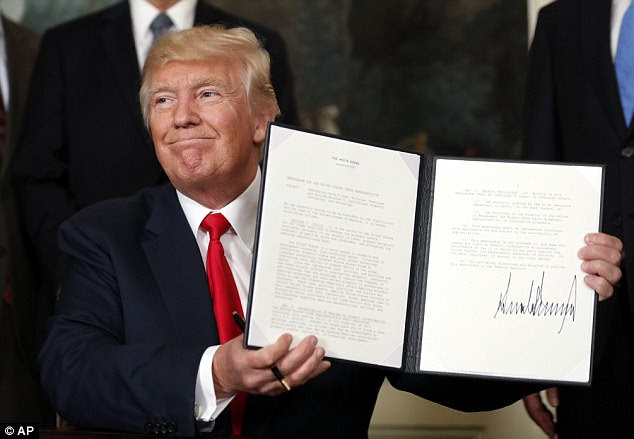 +2
On Monday, President Trump signed a memorandum instructing the U.S. trade representative to look into whether China should be investigated for intellectual property theft 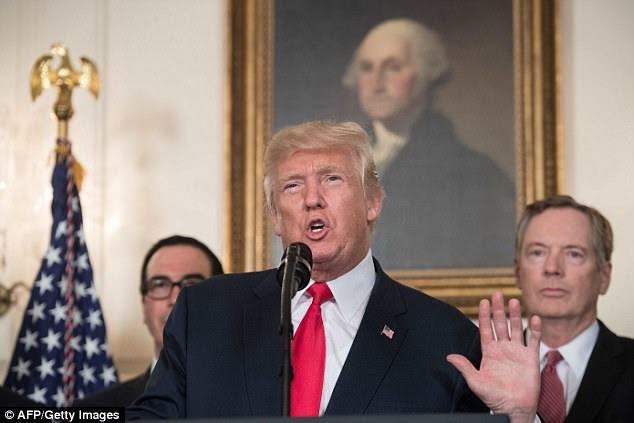 'Ambassador Lighthizer, you are empowered to consider all available options at your disposal,' Trump told reporters, flanked by Lighthizer and members of his economic team, including Treasury Secretary Steven Mnuchin.
'It's a very big move,' he added.
Analysts said the action was aimed at pressuring Beijing into a negotiated settlement to revise its practices.
China's policy of forcing foreign companies to turn over technology to Chinese joint venture partners and failure to crack down on intellectual property theft have been longstanding problems for several U.S. administrations.
The U.S. Chamber of Commerce, the largest business lobbying group in Washington, said U.S. companies must get equal access to the Chinese market, but said the two countries should be able to work out the issues.
'If the U.S.-China relationship is to deliver mutually beneficial growth, U.S. firms must enjoy the same broad, secure access to the Chinese market that Chinese firms already enjoy to the United States,' Myron Brilliant, the chamber's executive vice president and head of international affairs, said in a statement.
'Equally important, China must end forced technology transfer and protect foreign-owned intellectual property rights within China,' he said, 'We urge the two governments to work together to resolve these concerns.'
In a statement later, Lighthizer said the investigation would be a top priority for his office.
Although Trump constantly criticized China's trade practices on the campaign trail, his administration has not taken direct action against Beijing.
It declined to name China a currency manipulator and has delayed broader national security probes into imports of foreign steel and aluminum that could indirectly affect China.
In an editorial on Monday, the state-run newspaper China Daily said the investigation will 'poison' relations and warned the Trump administration not to make a rash decision it could regret.
The investigation could take up to a year, according to administration officials, opening the door to a settlement before a possible investigation is launched.
Matthew Goodman, a senior adviser for Asian economics at the Washington-based Center for Strategic and International Studies, said Beijing would likely resist negotiating under the threat of trade sanctions but could be amenable to a backdoor deal.
'I'm sure they will formally reject this if an investigation is launched and there is an implication this is going to require negotiation to resolve it,' Goodman said. 'But will they quietly be willing to talk about some of the underlying concerns?'
Jonathan Fenby, an analyst at the TS Lombard consultancy, said China was not interested in a short-term trade fix with the United States and will resist 'attempts to tie it down.'
Trump had been expected to seek a so-called Section 301 investigation earlier this month, but an announcement was postponed as the White House pressured for China's cooperation on North Korea.
Section 301 of the Trade Act of 1974, a popular trade tool in the 1980s that has been rarely used in the past decade, allows the president to unilaterally impose tariffs or other trade restrictions to protect U.S. industries from 'unfair trade practices' of foreign countries.

Mr Trump is trying to balance working with China on relations with North Korea, with his “America-first” trade views. Beijing warned that it “will not sit idle” if the probe leads to sanctions.
Mr Trump returned to Washington to sign the order, which authorises US Trade Representative Robert Lighthizer to explore whether to undertake a deeper Section 301 investigation.
If such a probe occurs and finds against China, the president could unilaterally impose tariffs, sanctions or other trade restrictions to protect US industries. The initial review is expected to take months.
Donald Trump has long railed against the massive US trade deficit with China. The total trade relationship was worth US$ 648bn last year, but trade was heavily skewed in China’s favour with the US amassing a nearly US$310bn deficit last year.
Some of that deficit, the argument goes, is because Chinese firms are copying US products and ideas and either selling them back to the US at a lower price or squeezing US imports out of the Chinese market.
Concern over counterfeit goods and online piracy also pre-date the Trump administration. US firms are especially upset about rules that require local partnerships or disclosure of intellectual property to enter the Chinese market, which they say facilitates transfer of their ideas.
The Commission on the Theft of American Intellectual Property estimates that the annual cost to the US economy from counterfeit goods, pirated software and theft of trade secrets is between US$ 225bn and US$ 600bn.
The commission says that China is the world’s principal intellectual property infringer and that it accounts for 87% of counterfeit items coming into the US.
In November 2015, the Office of the Director of National Intelligence put the cost of economic espionage through hacking at US$ 400bn a year. The European Union, Japan, Germany and Canada have all expressed concern over China’s behaviour on intellectual property theft.
In response to the move China’s commerce ministry issued a statement voicing “serious concern” and warning this would “definitely harm bilateral trade relations”.
“If the US side take actions that impair the mutual trade relations, disregarding the facts and disrespecting multilateral trade rules, China will not sit idle,” the statement said on Tuesday. Official media in China have criticised the measure too.
A Xinhua News Agency commentary labelled the move “outdated” and said it would hurt both countries. In an editorial, the official China Daily urged the Trump administration to pursue a different path.