Is the CIA using ISIS in Marawi to topple Philippine President Rodrigo Duterte?

The USA work on the scenario of a military coup in the Philippines in order to bring to power a new government focused on Washington, not interfering directly in the internal affairs of the country.
“I think that the civil war would satisfy the US in less degree than a state coup organized by the Philippine military forces. The Americans are now working in all areas, including military, to remove the  President with small losses,” .
The probability of a military coup is related with the fact that the current government of the Philippines cannot fully rely on the security forces and the army.

Is the CIA using ISIS in Marawi to topple Philippine President Rodrigo Duterte?

The Philippine pivot away from the USA and toward Russia and China will not be tolerated under any circumstances by Deep State.  The critical geostrategic location of the Philippines within the Asian side of the Pacific Rim is much to important for the Anglo-American Axis to lose.
With this understanding, the MSM article posted below can be interpreted as a status report on the CIA-coordinated hostilities being conducted on the southern island of Mindanao. This very same strategy was utilized by the C.I.A. in Chechnya in an attempt to preoccupy Russia on their southern border with purposefully engineered ‘Islamic’ militarism.  In the instant case, the city of Marawi is being used to stage state-sponsored terrorism (predominantly the U.S. government) as a launch-pad to conquer the rest of Mindanao.  The very same strategy was used in Syria whereby ISIS and Al-Nusra were used by the C.I.A. to take over the outlying cities.
The battle-hardened jihadis, who are often transported from other war zones throughout the world, are not really Muslims; rather, they are trained as professional terrorists in the ‘madrassas’ in Pakistan which are funded by Saudi Arabia.  The Salafis of Wahhabism, which originated in Saudi Arabia as a violent splinter group of an ultra-fundamentalist Sunni sect, fanatically fight for ‘jihad’ for whoever pays them the most. This is why there are so many Wahhabi terrorist groups involved in the Syrian War; the mercenaries are always switching their allegiances to the highest paymaster.
Just like the fake civil war in Syria, these Wahhabi fighters have been flown in, shipped in and bussed into the Philippines to man a U.S.-manufactured insurgency.  In this way the C.I.A. will attempt to overthrow Duterte, just as they are trying to militarily remove Syrian President Bashar al-Assad.

BBC
Foreign fighters are among Islamist militants killed in a southern Philippine city over the past days, officials say.
Six jihadists, including Indonesian and Malaysian citizens, were killed as the army continued its operation to drive the rebels out of the city of Marawi.
Attack helicopters and special forces have been deployed in the offensive.
It is a rare admission by the authorities that local jihadists are working with international groups.
Marawi is a mainly Muslim city in Lanao del Sur province on the southern island of Mindanao. The province is a stronghold for the Maute group, which has pledged allegiance to so-called Islamic State (IS).

What is happening in Marawi?

Philippine President Rodrigo Duterte said Monday after a meeting in Manila with America's top diplomat that human rights were not up for discussion.
Asked directly if the topic came up, Duterte cursed at a reporter who asked about reported abuses and said not to 'go there.'
'Human rights, son of a b****,' Duterte said, arguing he shouldn't be questioned about alleged violations given the challenges he's facing. 'Policemen and soldiers have died on me. The war now in Marawi, what caused it but drugs? So human rights, don't go there.'
U.S. Secretary of State Rex Tillerson had dodged on the issue, telling reporters before the chat that he saw 'no conflict at all' between the aid America is providing to the Philippines and the crimes against humanity that Duterte has been accused of being part and parcel to.
Scroll down for video 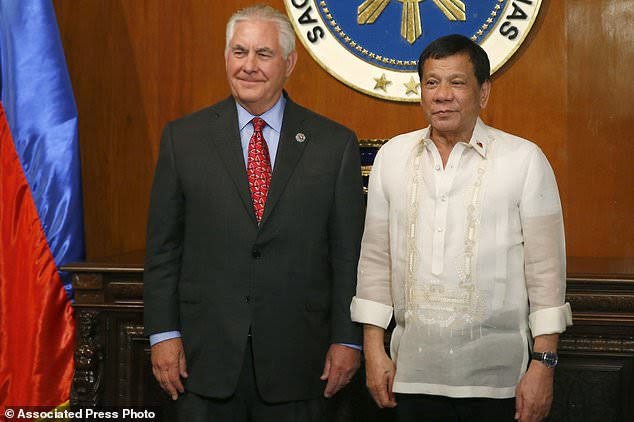 US Secretary of State Tillerson meets with Chines…

As they shook hands, the two ignored a shouted question about whether they'd discussed the topic.
Duterte and Tillerson met in Manila at a regional Asia gathering, where the Filipino leader voiced solidarity with the U.S. amid global concerns over North Korea's nuclear program.
It was the highest-level interaction to date between a member of President Donald Trump's administration and Duterte, accused by human rights groups of flagrant abuses in his bloody war against illegal drugs.
Trump is scheduled to be in the Philippines in November. He has also invited Duterte to the visit the White House, irrespective of the complaints from rights groups.
Duterte cast himself Monday as a humble friend of Trump's top diplomat as they met to discuss North Korea and an insurgency in the Philippines of ISIS-linked militants.
'You come at a time when I think the world is not so good, especially in the Korean Peninsula,' Duterte told Tillerson as he introduced him to members of his Cabinet.
Ahead of the meeting, Duterte's presidential spokesman, Ernesto Bella, said human rights would indeed come up, along with other pressing matters such as global terrorism threats, economic cooperation and security in Marawi, the city that has been under siege by pro-Islamic State group militants for more than two months.
'We also welcome the opportunity to address concerns such as human rights if and when raised,' Bella said in a statement. 'We have always included this issue in our discussions and engagements with foreign governments, particularly Western democracies.' 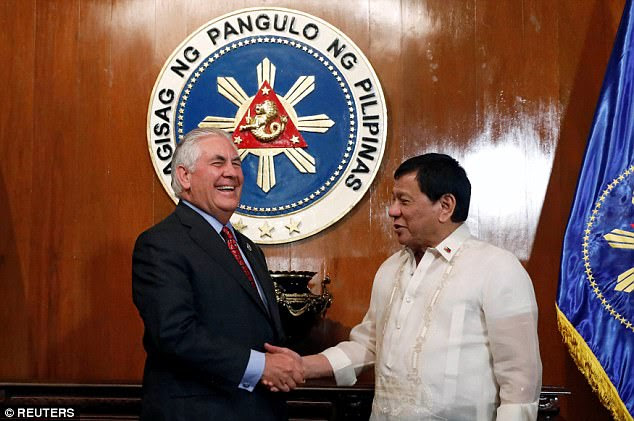 +3
U.S. State Secretary Rex Tillerson, center, links arms with ASEAN foreign ministers as they take part in the ASEAN-U.S. Ministerial meeting in the 50th Association of Southeast Asia Nations in Manila on Sunday
Civilians rescued from besieged Marawi city in Philippines
Loaded: 0%
Progress: 0%
0:00
Previous
Play
Skip
Mute
Current Time
0:00
/
Duration Time
1:40
Fullscreen
Need Text
Nearly 700 people have died in the intense fighting, including 528 militants and 122 soldiers and policemen, since hundreds of black flag waving gunmen stormed into buildings and homes in the business district and outlying communities of mosque-studded Marawi, a center of Islamic faith in the southern third of the predominantly Roman Catholic nation.
'I see no conflict - no conflict at all in our helping them with that situation and our views of the human rights concerns we have with respect to how they carry out their counter narcotics activities,' Tillerson told reporters before the meeting.
He added that it appeared the Philippines was 'beginning to get that situation under control.'
To that end, Tillerson said the U.S. has been providing the Philippines with surveillance capabilities, training, information and aircraft to help it fight the militants. He said the equipment includes a few Cessna aircraft and a few drones.
'The real challenge is going to come with once they have the fighting brought to an end how to deal with the conditions on the ground to ensure it does not re-em
Fighting erupted after a failed army raid to capture a top militant leader. At least 11 soldiers and 31 militants have been killed, a military spokesman said.
Philippine President Rodrigo Duterte imposed martial law in Mindanao on Tuesday in response to the violence. 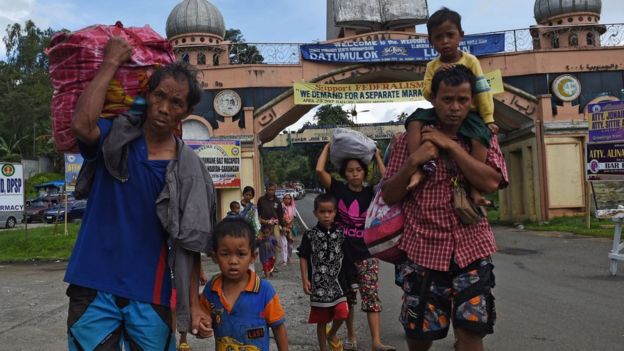 Martial law allows the use of the military to enforce order and the detention of people without charge for long periods.

What’s the IS link?

Manila’s solicitor-general said that what used to be domestic rebels have now subscribed to the ideology of IS.
“What is happening in Mindanao is no longer a rebellion of Filipino citizens. It has transmogrified into an invasion by foreign fighters,” Jose Calida told a news conference.


“They want to make Mindanao part of the caliphate.”
The government had always downplayed the numbers of foreigners amongst the local fighters, Sidney Jones, director of the Institute for Policy Analysis of Conflict in Jakarta told the BBC.
“And it’s crucial that the government acknowledges that there is a serious IS problem in the Philippines,” she says, explaining that a much better co-ordination between local and national authorities was needed to deal with the situation.


The admission confirms what observers see as moves by IS targeting the majority Muslim southern Philippines to establish a stronghold in South East Asia.
“It is clear that the number of men from both Indonesia and Malaysia who have travelled to Mindanao has increased over the past year,”