The return of the shuttle: The radical 'Dream Chaser' spaceplane that will soon take cargo (and tourists) into orbit


It is the return of the shuttle - albeit in a somewhat smaller form.
NASA has revealed a new 'mini shuttle' built by  Sierra Nevada's Corporation is about to begin its final testing, and will soon be delivering cargo to the International Space Station.
'Fans disconsolate after retirement of NASA's shuttle fleet can take heart: The next generation in reusable space vehicles is set to debut,' the agency said. 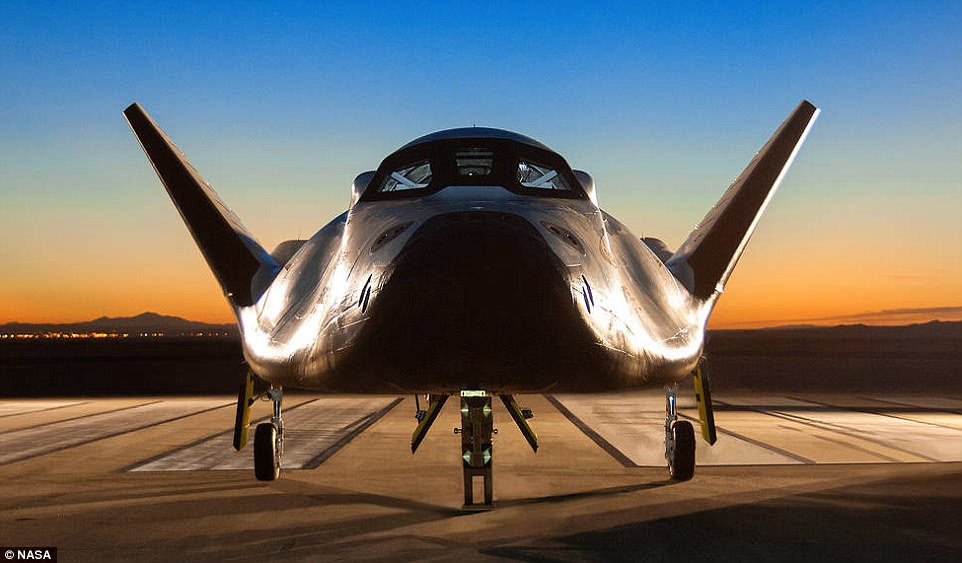 +13
The Dream Chaser photographed at dawn on the NASA Armstrong Research Center runway. The craft has been undergoing a series of tests at the base's runways.
The craft has been undergoing extensive tests at NASA's Langley
NASA says the 'guiding principles' for the craft are 'Fly frequently, travel safely, land on (most) runways, and operate economically'.
It plans to use the craft, called Dream Catcher, as a cargo-carrying aerospace workhorses routinely launching to low-Earth orbit for space station resupply and crew transfers.
In January 2016 SNC was one of three companies awarded contracts to ferry cargo from 2019 through 2024 to the International Space Station (ISS). ..

5:45
Fullscreen
ExpandClose
Under the terms of NASA's Commercial Crew Program, and as part of a Space Act Agreement, SNC is able to use agency wind tunnels for Dream Chaser studies and experiments.
That's where Langley came in, mounting a Dream Chaser scale model in its Unitary Plan Wind Tunnel for extensive aerodynamic data gathering, which was subsequently added to the spacecraft's performance database.
Although a quarter of the size of any of the now-retired space shuttles, Dream Chaser can carry as many as seven crew members.
Although there is but one basic spacecraft airframe, there are two system variants optimized for either manned or unmanned missions.
SNC says the Dream Chaser can be reused 15 or more times, more than any other current operational space vehicle. 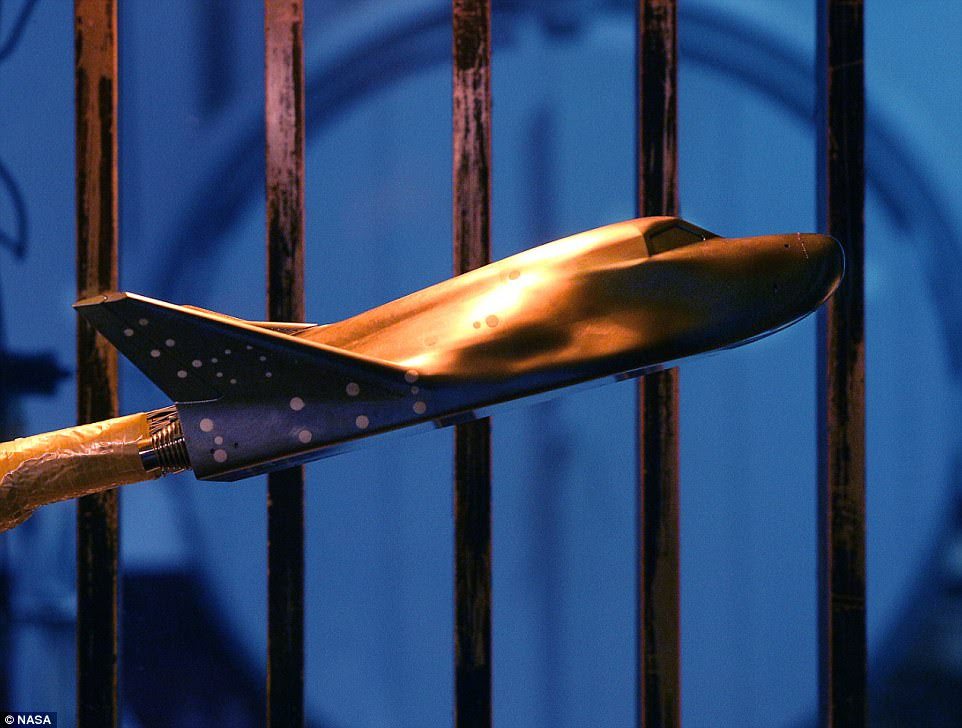 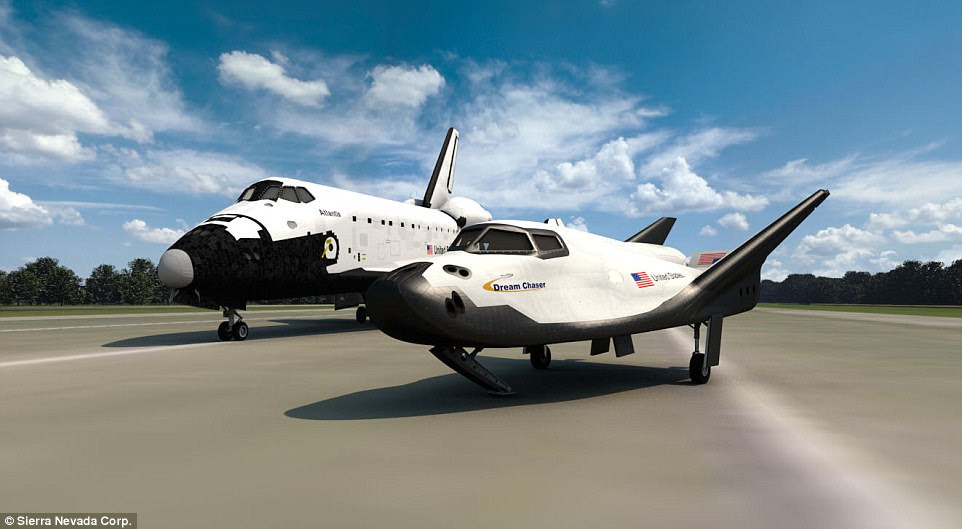 +13
Shown alongside the shuttle Atlanta in this artist's impression, the Dream Chaser will return
The company also touts the spacecraft's flexibility in remote sensing, satellite servicing, and even 'active debris removal,' otherwise known as space-trash cleanup.
A second round of Dream Chaser flight tests at NASA's Armstrong Research Center is slated to continue through the end of the 2017 calendar year.
The test campaign will help SNC validate the aerodynamic properties, flight software and control system performance of the Dream Chaser.
It is being prepared to deliver cargo to the International Space Station under NASA's Commercial Resupply Services 2 (CRS2) contract beginning in 2019.
The data that SNC gathers from this test campaign will help influence and inform the final design of the cargo Dream Chaser, which will fly at least six cargo delivery missions to and from the space station by 2024. 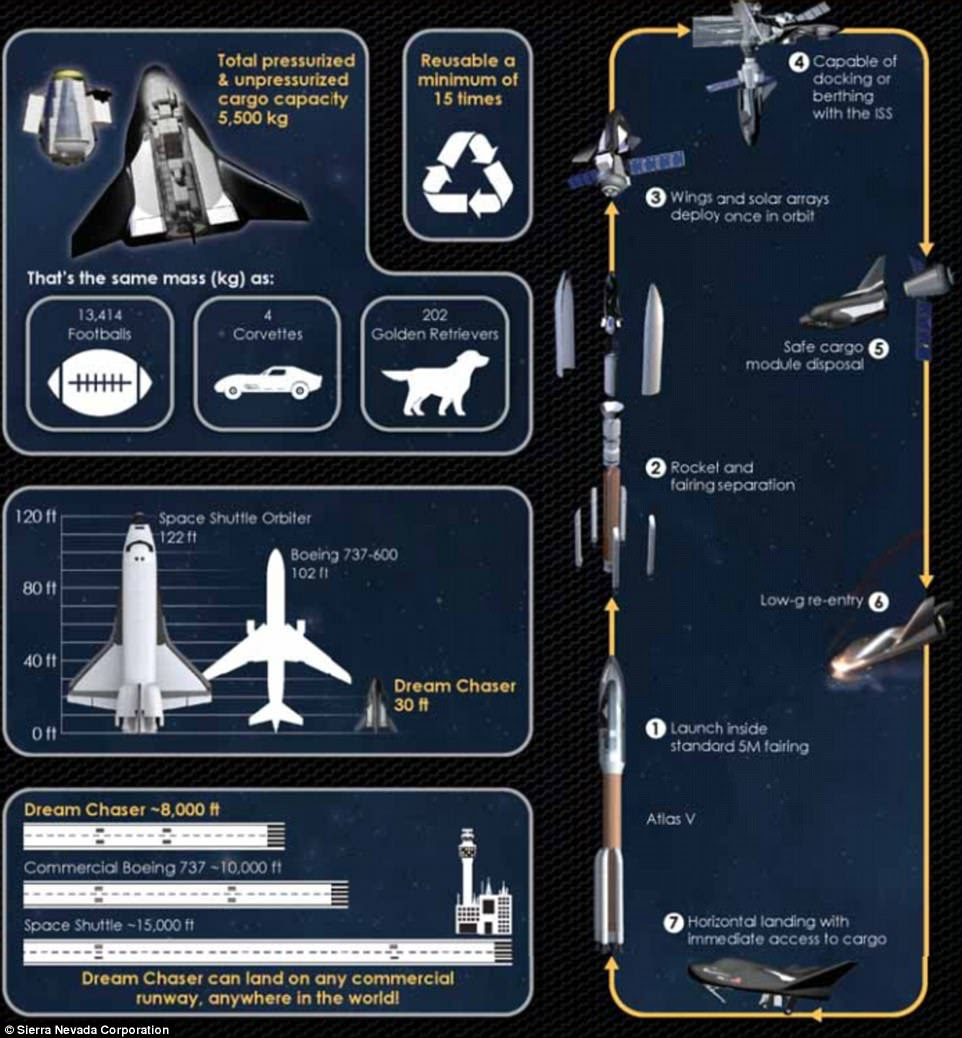 +13
How the Dreamchaser Will work: Each craft can be reused 15 times.
Last year NASA  announced Sierra Nevada Corp. will join SpaceX and Orbital ATK in launching cargo to the International Space Station.
These flights, yet to be finalized, will run through 2024, and marks a second chance for the Nevada-based company, which is developing a mini shuttle called Dream Chaser.
Sierra Nevada competed for NASA's commercial crew contract, but lost out in 2014 to SpaceX and Boeing.
ThisThe other companies use standard-shaped capsules.
Like SpaceX, Sierra Nevada plans to launch from Cape Canaveral, Florida. 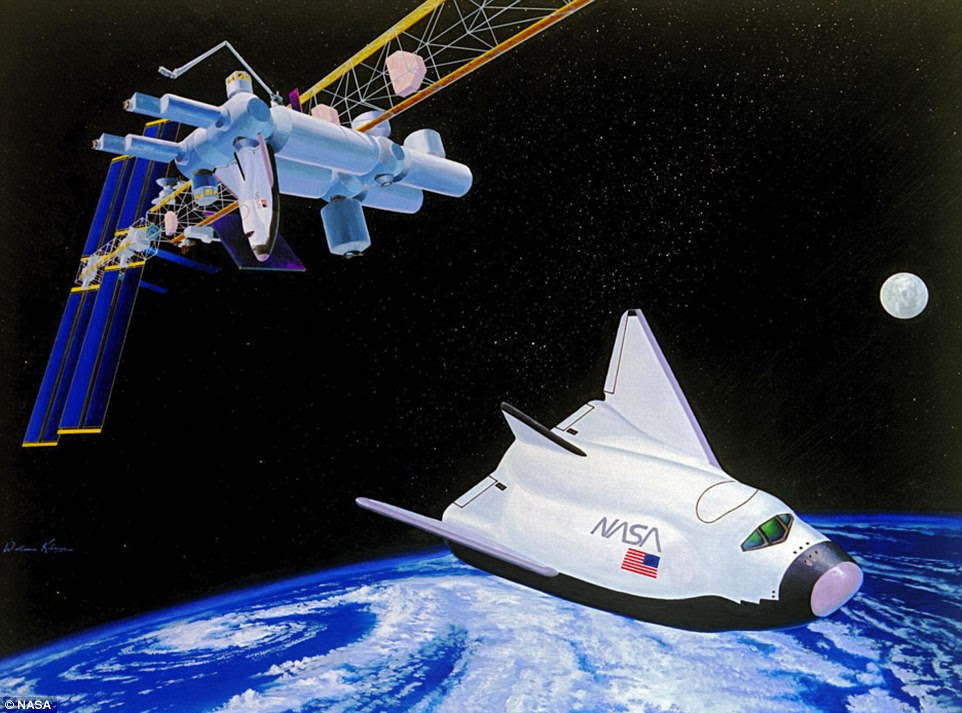 +13
Artist's concept of an HL-20 at a space station.
The spacecraft will be able to land back on Earth, like the shuttle, and bring back science experiments and other items from the station.
Now, only SpaceX can return goods.
Other cargo ships are filled with trash and burn up on re-entry. 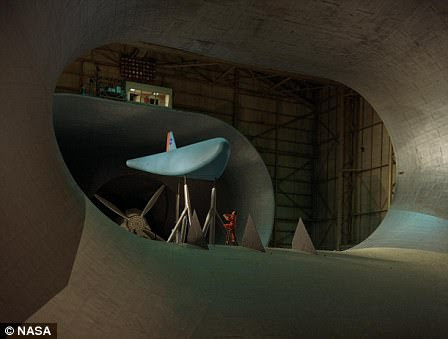 +13
A 28-foot model of the HL-10 lifting-body reentry vehicle is shown being mounted in NASA Langley Research Center's Full Scale Wind Tunnel to determine its low-speed static stability and control
The new spaceplane stage has been set by decades of NASA work done at Langley Research Center on horizontal-landing, or HL, lifting bodies.
Sporting a design reminiscent of the upward-flexing pectoral fins on breaching manta rays, HL vehicles feature rudimentary wings.
As the craft settles through Earth's atmosphere from orbit the chubby, cigar-like fuselage generates lift from more air pressure on the bottom than on the top.
Flying Wingless First championed for flight testing by NASA engineer H. Dale Reed in the early 1960s, the HL concept went through a number of design changes and improvements, eventually resulting in a series of experimental piloted aircraft.
The Northrop HL-10 – referring to the tenth design evaluated by Langley engineers – was built to assess specific structural refinements. Langley laboratories and wind tunnels hosted a variety of early studies on scale models before any full-scale craft were constructed.
The HL-10 would be one of five 'heavyweight' lifting body designs flown at NASA's Flight Research Center (now known as Armstrong Research Center) from July 1966 to November 1975 to demonstrate a pilot's ability to maneuver and safely land a wingless vehicle.
The information the lifting-body program generated contributed to a database crucial to the genesis of the space shuttle program.
A New Kid Spurred by the Soviet Union's development of its subscale, unmanned BOR-4 – a testbed for the country's would-be Buran space shuttle – by the 1980s Langley had set to work on a HL-10 successor, known as the HL-20, or 'Personal Launch System (PSL).'
By 1990s, a 29-foot full-size, non-flying HL-20 model was built by the students and faculty of North Carolina State University and North Carolina A & T University to study crew-seating arrangements, habitability, equipment layout and how best to enter and exit.
Although never flight-tested, the PSL did ultimately deliver: its design would be the basis for development of Sierra Nevada's Corporation's (SNC) Dream Chaser. 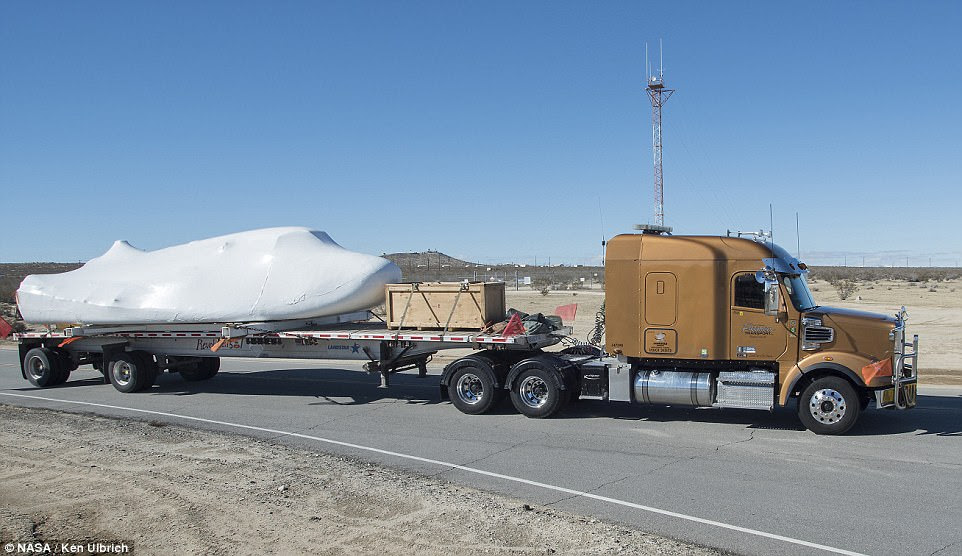 +13
Sierra Nevada Corporation has delivered its Dream Chaser spacecraft to Edwards Air Force Base ahead of its 2019 missions to supply cargo to the International Space Station. 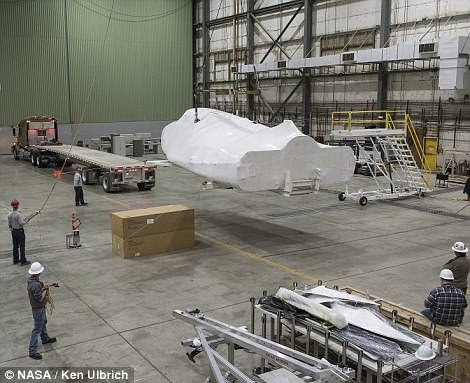 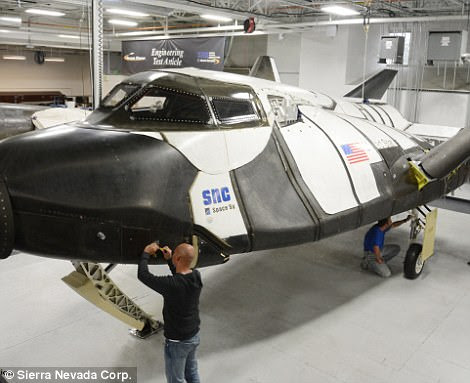 It is being prepared to deliver cargo to the International Space Station under NASA's Commercial Resupply Services 2 (CRS2) contract beginning in 2019.
Recent launch accidents by SpaceX and Orbital prompted Nasa to pick a third vendor, for increased flexibility.
Orbital launched from Wallops Island, Virginia, until a launch explosion in 2014.
SpaceX experienced its own launch failure last summer 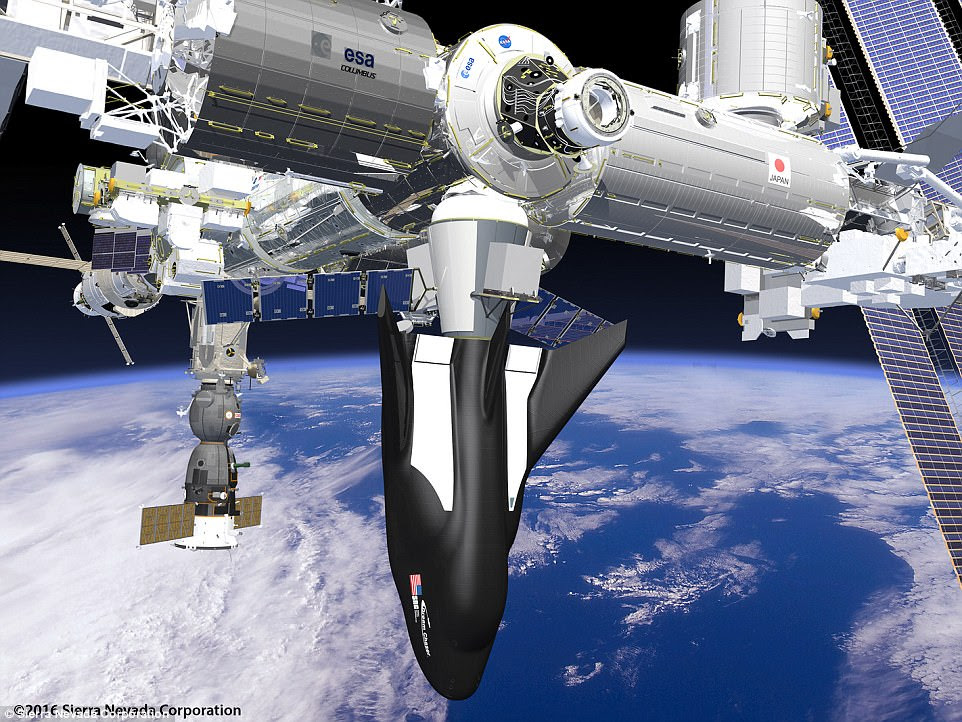 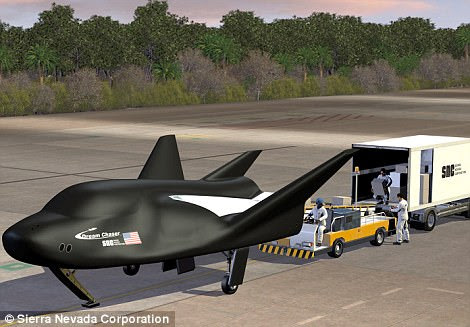 +13
+13
The spacecraft will be able to land back on Earth, like the shuttle, and bring back science experiments and other items from the station.
NASA awarded its first commercial resupply contracts in 2008.
The first flight was in 2012.
The latest contract calls for a minimum of three flights by each of the three companies.
'Baby shuttle' skids off runway after landing gear doesn't deploy

HISTORY OF THE NASA SHUTTLE PROGRAMME 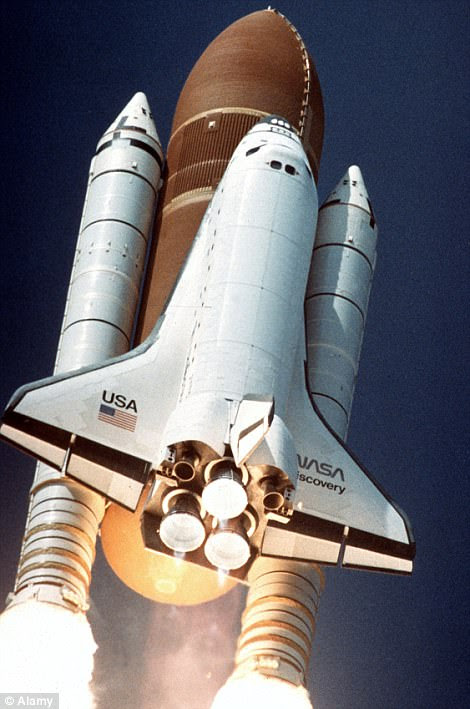 The Space Shuttle Discovery is launched on Mission STS-29, March 13,1989
Born with Columbia, it was Nasa's longest-running space exploration programme.
Atlantis was launched in 1985.
The next-to-youngest in Nasa's fleet remains at Kennedy Space Center as a museum display.
This grand finale came 50 years to the day that Gus Grissom became the second American in space, just half a year ahead of Glenn.
Atlantis - the last of Nasa's three surviving shuttles to retire - performed as admirably during descent as it did throughout the 13-day flight.
A full year's worth of food and other supplies were dropped off at the space station, just in case the upcoming commercial deliveries get delayed.
The international partners - Russia, Europe, Japan - will carry the load in the meantime.
Not all 1,333 days in space have been a success, however.
Two of the shuttles - Challenger and Columbia - were destroyed, one at launch, the other during the ride home.
Fourteen lives were lost.
Yet each time, the shuttle programme persevered.
The decision to cease shuttle flight was made seven years ago, barely a year after the Columbia tragedy.
President Barack Obama put paid to President George W. Bush's lunar goals, however, opting instead for astronaut expeditions to an asteroid and Mars.
The space shuttle was sold to America as cheap, safe and reliable. It was none of those.
It cost $196billion over 40 years, ended the lives of 14 astronauts and managed to make less than half the flights promised.
Nasa's first space shuttle flight was in April 1981.
Now Atlantis has landed, it and the other two remaining shuttles are officially museum pieces - more expensive than any paintings.
The total price tag for the programme was more than twice the $90billion Nasa originally calculated.
Atlantis undocked  from the International Space Station in September 2006.
But as a mistake it is one that paid off in wildly unexpected ways that weren't about money and reliability.
Former president George Bush Sr said: 'The discoveries it enabled, the international co-operation it fostered and the knowledge it gained - often at great human cost - has also contributed in countless, important ways to humanity and our common progress.'
Mr Bush oversaw the programme's early days as vice-president, a job that has traditionally included supervising Nasa.
University of Colorado science policy professor Roger Pielke Jr., who studies shuttle costs and policies, said there are probably other ways the U.S. could have spent several billion dollars a year on a human space programme and gained more.
When the shuttle succeeded, it did so in a spectacular way.
But its failures were also large and tragic.
Seven astronauts died when Challenger exploded about a minute after launch in 1986 and seven more died when Columbia burned up as it returned to Earth in 2003.
Last-ditch appeals to keep shuttles flying by such Nasa legends as Apollo 11's Neil Armstrong and Mission Control founder Christopher Kraft landed flat.